May 8.  The Gila River alternate is not the official CDT, but many hikers choose this path, after more than a week of dry desert hiking.  This trail crosses from side to side of the river, as the banks take turns running into impassable canyon walls with the river’s twists and turns.  I was lucky to be able to hike here this year.  Only a few days after I passed through, the Gila River area closed due to the Black Fire wildfire.

On this day, I started in desert above, then followed switchback trail down into the Gila River canyon.  Not much listening to audio books today, too much to look at.  I watched the canyon walls change as I descended, the heights above disappearing, the lower reddish walls and crags appearing in greater clarity. 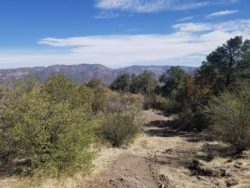 I took a break to eat by the river.  It was soothing to sit there on a muddy bank, to the sound and sight of flowing water.

After the break, I crossed the Gila, then followed a marked trail on the other side.  It felt funny to slosh across in sneakers, but there were so many crossings ahead, there was no sense in taking shoes off each time.  I followed the cairns (rock towers indicating trail direction), and assumed I was staying on trail, until a familiar hiker who had been ahead came walking back towards me.  Not a good sign.  I said, “Uh oh!”

It was a terrible afternoon for him.  We had both headed downstream, not upstream, a sadder miscalculation in his case.  It was easy to do, as the river curves in a “U”, and one could spot those cairns and assume they marked the path we wanted.  In fact, we needed to head upstream.  (Those cairns marked a path for other hikers, not those of us trying to follow the Gila River alternate northward.)  The exasperated hiker said he’d done about 8-10 extra miles in this mishap.

Over the next mile turnaround, I kept telling him I didn’t know what to do except backtrack, when he paused repeatedly to look at his phone and exclaim in frustration.  He was grieving.

Back on track, I took in the canyon walls red with green lichens, half moon floating in the sky above, pretty new green of cottonwood leaves, aspen, white bark of the sycamore, the large-trunked Jeffrey pines.  It was refreshing to see the dry desert canyon and hills through the leaves and limbs of those trees, adding some life to the landscape.

The afternoon was hot, requiring breaks, water, snacks, frequently, for me.  The other hiker took a second lunch break with me, then we kept leap-frogging the rest of the day. I had told him I planned to hike into the evening, but I was tired and sore by late afternoon. I collapsed in my tent, in a sandy patch under a sycamore. 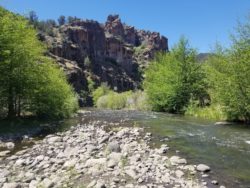 It was so windy in the evening.  I expected the gusts to die down, as they so often did with dusk.  Thus far, it had seemed to be a desert thing that happened with the cooling of the day.

Pretty cricket sounds down in the canyon.  Sometimes a cicada.  River with muddy banks, cow tracks everywhere- made me think of home, summer days in cow creeks.

May 9.  The night was one of the windiest I’ve experienced.  The evening breezes intensified over the next hour, with gusts powerful enough to wake me, one side of my tent pushed down to my face level for long minutes before the wind hurtled on.  Wind is a funny thing sometimes.  In this case it was a concentrated force, seemingly howling against and around the tent one moment, then moving up or down the canyon and away, before returning.

I was worried about how my tent would fare under the pressure, when sure enough, during one round of gusting, a part of my tent poles snapped, and the jagged end ripped through the fly.  My spirits sank lower when I started tasting grit in my mouth, saw piles of sandy dirt on top of my sleeping bag, and then felt a fine layer of grit all over my skin- face, arms, inside mouth and nose.

I wondered if I was in one of those funneling dust storms I had seen in the distance out in the desert.  In the dark, wind howling around me at times, I hoped it wasn’t getting stronger, wouldn’t pick me up overnight in a tornado-like force.

The next few hours I tossed and turned and tried to ignore everything and get some sleep.  After a few hours the wind must have died, because I woke to a gritty but wind-free environment.

In the morning, I got up and hiked the next few miles along the Gila, stopping here and there to eat breakfast, cross the river (colder water at this hour), wash pebbles out of my shoes, snack.

Tough to make any real hiking progress, but maybe that was a good thing for a stretch.

I finally made it to a road, and then Doc Campbell’s trading post, a general store many hikers send boxes of food to, along this route.

There was already a group of hikers there when I walked up.  It was nice to see the hiker from yesterday again.  I had camped less than a mile from where he stopped the night before.  I asked him how the wind had been for him.  He laughed and said, “I’m an old man, I never sleep anyway.”  That made me laugh.  It couldn’t have been a good night- he had been too tired to put up his tent and slept out in the open, in a sleeping bag.

I picked up my box from inside and talked with the other hikers about the Gila Cliff Dwellings ahead.  I thought it neat that everyone was taking the time to go to the National monument, in spite of the dwellings’ location slightly off trail.

The monument was well-maintained and worth checking out.  It was a short walk up a mountain to the dwellings- so cool up there in a cave-like setting, and neat to imagine people making a life up there in the caves.  A hiker caught up to me and we walked through together, marveling at the structures’ standing up against the passing of time. 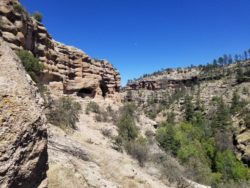 Gila Cliff Dwellings, if you look closely enough at those caves. 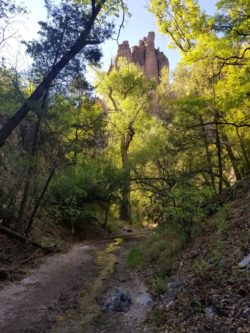 The hike back down to the Gila River was beautiful, first a high route along grassy yellow hills with some junipers, then down Little Bear Canyon with a shallow stream running down it, opening into the Gila River canyon with majestic orange turrets.  Prettiest view and hiking I’ve experienced yet, and some other hikers looked at me expectantly when I arrived to camp, and said the same.  Massive cottonwood trees, largest cottonwoods I’ve seen so far.  Everything more beautiful in evening light.  Running water.  Birds above, flying along canyon walls.

A good end to the day, camping in a large area with other hikers, eating dinner together, chatting.

May 10.  I woke up around 0445 and was glad I felt well-rested, knowing the two older hikers would likely start packing up soon.  They had been planning to do a 25 mile day- at this point I was usually done at 20.  Sure enough, I soon heard the sounds of stirring in the dark, starting at 0500.  The competitive spirit kicked in, and I started moving myself.

I started hiking, then the two older hikers passed me, chatting.  I didn’t see them again- they stuck to their plans for longer mile days.  So-called AARP club.

Beautiful, steep canyon walls for most of the day.  Spires rising up, the erosion having created these unique formations, towers, canyons, crevasses, caves.  Like walking in a cathedral, a natural one.

I was also taken by all the plants along the trail, so many new ones compared to only junipers and pines of the past miles.  Boxelder maple and red alder everywhere, then false solomon’s seal, common hoptree, hackberry, grapevine.

Frogs, catfish, pollywogs in the waters.

Feet sodden and heavy, but after one hiker told me wet feet don’t bother him as much as dry desert for blisters, I felt better about my own wet feet.  They didn’t seem any worse for wear.  I tried to dry them on my breaks at least.

This upriver section of the Gila seems cow-free, so much more pristine and wild feeling.  Water clearer, I believe. 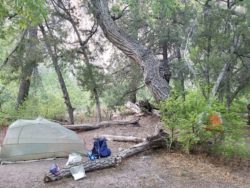 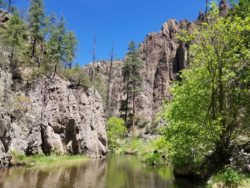 May 11.  Woke up to chilly air and dark, decided to sleep in later.  Chilly because of camping down by the Gila.

Started packing up around 0545, and heard the hiker couple nearby doing the same.  Shoes frozen!  We had quite a time manipulating the stiff shoes open enough to slide our feet in, then clunking around in ice shoes.  A new one for me, or at least, hasn’t happened in a long time.

I started walking and sure enough, crossed through the Gila a few times.  Terribly cold, legs red with cold.  Each crossing, what kept me moving was the thought that the faster I walked, the sooner I’d reach the end of the crossings, or a sunny spot.

I kept a close eye on the sunlight slowly descending into the canyon, wishing it would hurry.  Finally, after an hour’s time, I sat in a sunny meadow area and ate breakfast, trying to soak in the heat.  It was a weak morning light- I could’ve used high noon sunlight at the moment.

I started walking again, and shivering.  Cool air wafted up from the river or in cold pockets in the canyon at times.  Eventually everything warmed up, and I started to feel warmer air drifting down, and was grateful not to be as cold anymore.

I walked to the final crossing and said goodbye to the Gila.  The trail turned away, to a dam and Snow Lake ahead.  It was neat to have walked so many miles along a river, seen the changes within a canyon and changes in the river (beaver dams, waterfalls, ripples, pristine versus cattle area) over those miles. 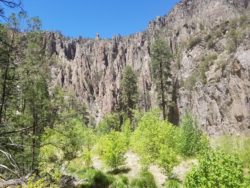 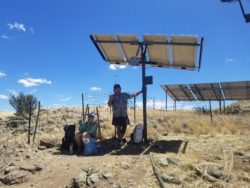 The trail continued over open cattle fields a few miles to a cow pond with green algae.  I double treated: filtered and added sterilizing drops.  The hiker couple arrived too, and we all relaxed under the only shade to be had- solar panels.  We laughed over how screechy and touchy their shade-giver was, sensitive to the wind, like the soundtrack to a horror movie.  What a time.  All of us filtering green water, huddled under solar panels, electrical wires dangling, talking, laughing.  Middle of high cattle range hills, middle of nowhere.  I enjoyed spending more time with them.