Here There be Giants

Making my way through Colorado. I passed places I’ve hiked before and have come to trail I have never hiked before. From here all the way to the border. Colorado has been a vortex like no other. I almost can’t believe it’s almost over. Here’s the process.

Watched USA win the World Cup. Then we went to soak in the pools. It was a bit chilly but had a good lunch and talked to Viv about authenticity and power. They drove me to a trailhead and parted. It was a truly fabulous weekend.

Hiked up and met more thru-hikers, Cliffjumper and Tabaz. They were doing a lower route. I pushed on toward the base of Grays. There are a few ways up, two from the side I was attempting. I tried going up a route that was supposed to be less steep but it got too snowy. So I went back down and started up the official route, up Argentine Pass. Camped at a flat spot along the uphill. 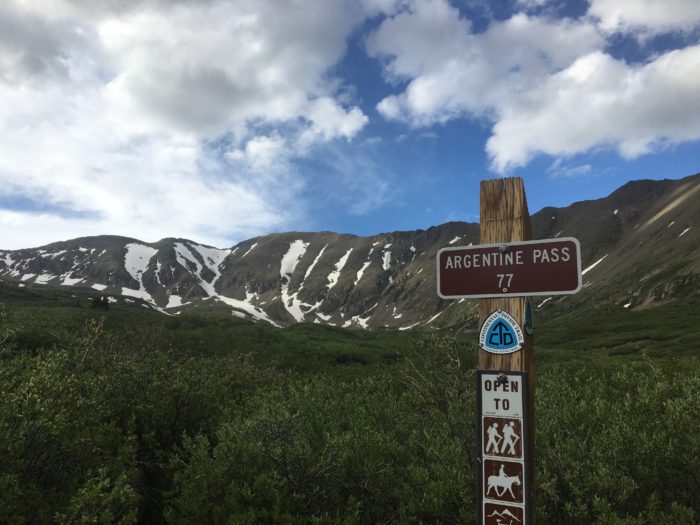 Woke up and packed up. Started climbing but didn’t take long to get to an ice chute I had to traverse. It was maybe 60 feet across, with a four-foot cornice I had to climb. The chute went down 200 feet straight into rocks and cliffs, my literal worst fear. I attempted crossing but turned around. Once I got back to solid ground I tried my best to hold myself but fell hard and fast into a full blown panic attack.

I was clinging to a rock on the side of a mountain trying to wrestle back control of my breathing. The fear was so intense but my desire to overcome it was raging against it. I spent 45 minutes frozen and decided the effort to overcome that fear would take too much time and energy. And I still needed to get to Canada. I knew that Grays Peak would still be there, but the summer solstice was past. The days would only get shorter from here and there are a lot of miles between me and Canada.

Headed back down to the trailhead my aunt and uncle dropped me off. Managed to get a ride around Grays to a trailhead past it. Saw Cliff and Taz there. We connected over feeling defeated by Grays as we hiked on. I outpaced them up to a pass. From here there was a 13er followed by ridge walking for two days or so. The summit looked doable, much less steep. I think felt much more a growth zone than a panic zone, but I was feeling pressured by time. It felt like I had essentially wasted a day attempting to summit Grays so I decided to bail down a bowl to some roads that would cut a day off.

I rolled my ankle descending, landing in some mud. It was not my finest moment, covered in mud, tears on my face, waiting for the pain to die down, really feeling how much in fear I was in. Got up and started down again, more carefully this time. My shoes were already wet so I sloshed through down to a road that materialized in the woods. Dry shoes and socks are the ideal to hike in, but there’s a certain freedom that comes from the surrender to just be wet. I had quick dry everything, basically. So I wasn’t too stressed about being an getting as wet as I did.

Made it to a lake as a massive storm came through. It only lasted 15 or so minutes but the intensity was almost overwhelming. I walked along the dam that formed the lake as wind whipped the rain sideways along with tiny hail that stung through my rain gear. Made it to tree cover on the other side, where the wind died down a bit.

Got to a highway and roadwalked a ways until I hitched into Winter Park, where I got a meal for comfort. Hiked to a campsite a bit outside of town and camped next to a burbling creek.

Woke up and got moving. I roadwalked back up to the trail. It was gorgeous hiking, really grounding to be among the trees. It was almost as if they hold reality together. Their roots hold dirt together and their leaves produce oxygen. I feel like I can relax my hold on reality much more. On top of a mountain, it’s just rocks and me. So reality really rests on me and my decisions. And my anxiety makes me focus on the mistake, or the fall, so much that I’m afraid I’ll make it. So I’ve been skirting ridges through Colorado, with occasional forays up to the ridges and passes with some successes and some failures.

I ran into Doubledown, Smackdown, and Human Torch. I hadn’t seen them since Ghost Ranch in New Mexico. Caught up with them; they were southbound at this point, and it was good to hang with them. But we all had miles to hike so we parted. I got to a lake and took some time at an alcove that was quite gorgeous and peaceful. Found a site and made some food before bed. Lots of mosquitoes. 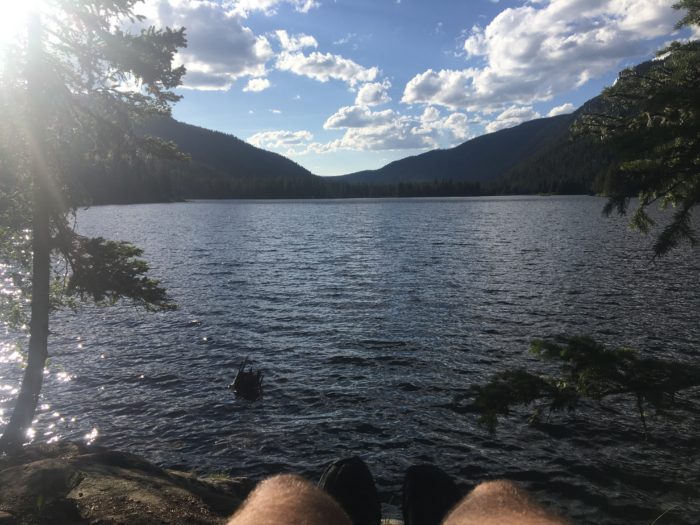 Woke up and hiked to a pit toilet to start the day. I wasn’t in wilderness anymore as I hiked through a lot of campgrounds. Walked along the lake passing a lot of day hikers. I could have been more open and engaging but I wasn’t very comfortable. I got to Grand Lake and the town was nice but it felt very vacationy. There was a feeling of unreality that I couldn’t shake.

I did decide to stay at the hostel in town. As they had a kitchen and I could really use some food and downtime. Ate food and rested the rest of the day. There were some cool people hanging out in the common area but I was feeling a bit introverted and depressed. So I just went to bed.

Got up and made a breakfast of champions. Eggs, bacon, potatoes, peppers, onions, along with some really good coffee perked me right up. I strummed a guitar the hostel had for a bit. Packed up and took some time to write. Met some other hikers, Family Size and Pincushion. Four or so days to Steamboat, the last town in Colorado. Almost there.