Rainy Days in the Bob: The Road to Glacier

Woke up in Augusta and got some coffee. Packed, cleaned up, and caught up on writing for the morning. Finished up just as we lost service on the ride back up to trail. It was stressful so I lazed about at the trailhead with Wraps and Link. Pushed on into the Bob Marshall Wilderness; this place I’ve heard about for years I was now walking into.

It had been a burn area a few years ago so most of the trees were dead. Pushed along to a bridge where I caught everyone. We took a long, lazy break. I had some exhaustion built up so I stayed while everyone pushed on. Packed out and pushed out later and caught everyone a few miles down. Had a chill dinner and we all went to bed early.

Woke up after an OK night’s sleep. Still took a bit of a morning but got out. It started to get a bit rainy and drizzly. Passed some other hikers I’ve hiked around. Pushed on until I found SeaLegs and Sweets and ate some lunch. Finished a climb and came across the Chinese Wall. 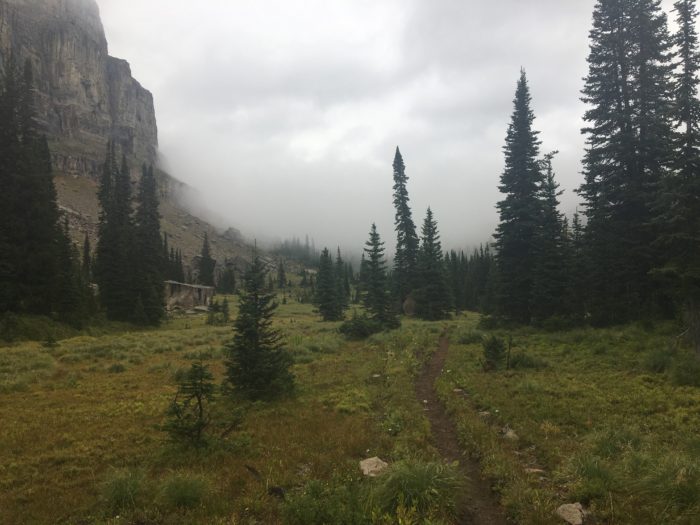 It would have been nice to see in bluebird sky in full glory but the cloudy mists gave everything an otherworldly feeling. It was an impressive feature. A granite wall for seven miles. Leapfrogged with SeaLegs and Sweets until I fell in with Sweets. We had a debate about human nature to keep ourselves going. We were intellectually sword fighting on the side of a misty mountain valley. I was quite stimulated. 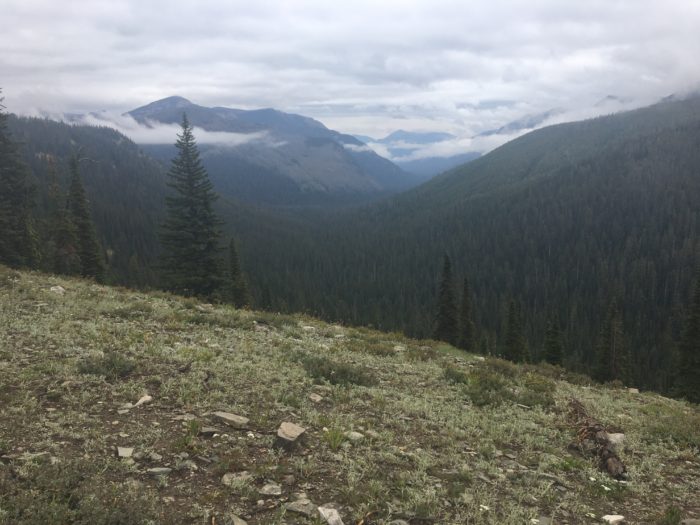 Pushed down an alternate that was a bit overgrown and proceeded to get soaked by the plants. Made it to a site and set up camp. Found enough dry stuff to make a fire as SeaLegs showed up. Had dinner and enjoyed the fire before a bit more rain pushed us to our beds. Had a pretty enterprising deer trying to get into our food bags for the night, so another OK night’s sleep. I’m gonna need a good one really soon.

Woke up in cold. Had slept OK but had a dream that put me in a weird place. Caught up on writing while a dread for hiking took over. My fly and socks were wet, as was the world around me. But I grounded and packed up and plunged out into the soaking forest. And it was pretty cool. My gear is perfect for this as the overgrown leaves slapped against my water resistant, quick dry clothes and deposited their water. It was quite peaceful walking. Came across some huckleberries that I took time to pick and enjoy. They were ripe and glistening with moisture. It stayed overcast as I leapfrogged with other hikers along a river. 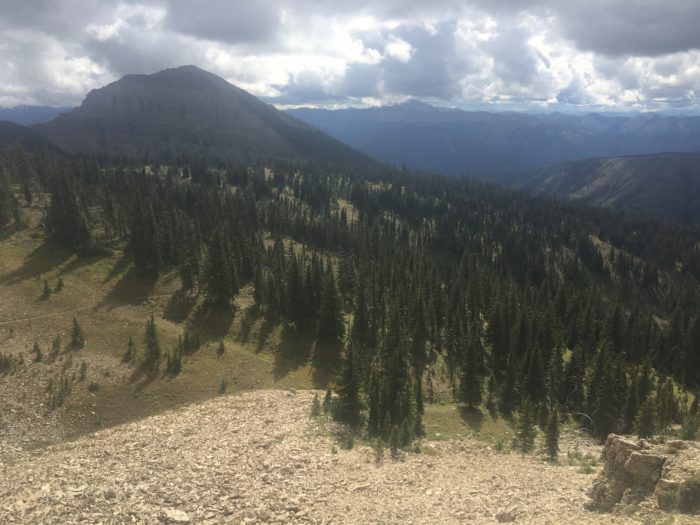 Then a massive climb. Intimidating, but I have robotic legs made out of tree trunks at this point and the lung capacity of a horse forged at elevation in Colorado. So I made short work of it and was rewarded with a spectacular view. Could see the Chinese Wall and the mountains beyond. I’m not sure what process formed these features, which just added to the magic of the place. Dropped down to a lake as the sun came out. So I sunned my stuff, let it all dry out. Pushed a bit farther to a spot where I threw up my stuff and had an early evening. 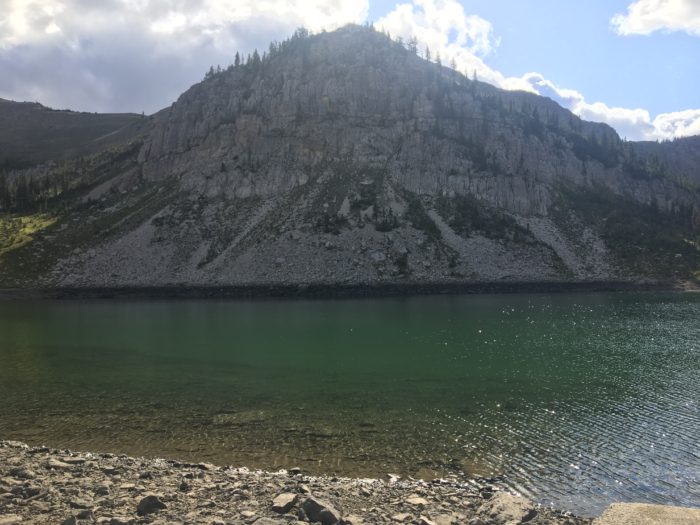 Woke up and got moving early. Made it to a guard station and took a break. I felt like I could do a big day. So I fueled up on food and coffee and pushed miles. Pushed until lunchtime and had a meal. Krafty and his friend, Poles, passed on. I leapfrogged with them for the day. It was quite flat so I was able to push far. Took one break at water as the temperature started to drop. Combined with an increase in cloud cover and wind, I could feel rain coming in my bones. Krafty had also told me it was coming. Got to some water and filled up as the rain barely started. Got to a site and threw up my tent as it started raining more fully. Cooked food and tried to sleep while staying as dry as I could, which was not very.

Woke up and got moving early. 18.5 miles to road. Pushed through along a river. Soaking wet; almost everything I had was wet. Which made it easier to ford rivers and splash through mud puddles. The trail was waterlogged and got sticky and slippery. It wasn’t the greatest trail, but it was flat, drizzly, cloudy forest walking. Pushed along and caught another hiker, UltraViolet, who I hiked around along the trail. We hiked a bit but I outpaced her to the highway. She caught me as I was hitching and we caught a ride into East Glacier Park. Got to the post office and got my last resupply package. Also my passport. Connected with SeaLegs and Sweets and had the best hot shower I’ve ever had in my life. Then put on some warm, freshly laundered clothes. Went to dinner and connected with other hikers. There’s a bubble here, as this is the bottleneck into and out of Glacier National Park. Went to bed a bit too sugared up so I didn’t have the greatest night of sleep.

Woke up and got some coffee and breakfast. Had a bit of sun so I dried my tent out a bit. Then down to resupply. Back to the room to chill. Watched some movies till Wraps and Link showed up. Hung out and then went to get some food. Early bed and then heading out tomorrow into Glacier for the last section. It doesn’t really feel real.