The Continental Divide Trail has a few starting points to choose from (for a north-bounder).  The most popular choice is to start at Crazy Cook Monument in southern New Mexico, because there are two known shuttles that take hikers to this middle-of-nowhere point.

In order to begin this hike, I flew from Pennsylvania to El Paso, Texas.  A friend from a past long hike (PCT thru hiker) drove me from El Paso to Lordsburg, New Mexico, the site of a shuttle pick-up.  The shuttle was then driven by a volunteer with the Continental Divide Trail Coalition.  The shuttle drives hikers approximately 3 hours out into the desert, to the starting monument at trail’s beginning.

It was fun to drive to Lordsburg with someone well-versed in the long distance hiking world, and who plans on hiking this trail himself next year.  We talked much about past hikes and what might be ahead for me (and eventually him) on the CDT.

We drove the last few hours to Lordsburg in the evening, the setting sun mercifully casting a gentler glow over the open desert landscape before us.  My friend said that he hadn’t cared for the desert hiking of the PCT (“All that wind!”) and I felt reassured, remembering that I loved the southern California desert hiking.

The next morning, we arrived early to the shuttle pick-up area- a small building with a “Continental Divide Trail Coalition” symbol in the window- and ate breakfast in the car, waiting for the rest of the shuttle riders to arrive. 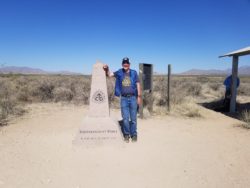 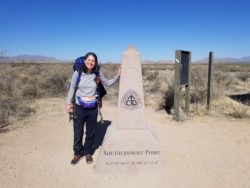 My friend said he wasn’t sure how he would feel at this point, if he would be nervous if he was starting this long trail, because it is different from the others.  I thought it was a nice way of asking how I was feeling about it, if that’s what he was getting at.

I felt at peace, prepared to meet whatever I imagined was to come.  Our recent conversations about the trail had often exposed that blasé attitude about everything- unable to answer exactly how many water caches would be supplied in the first part of the trip, unsure how many miles of trail were in New Mexico.  Not bothering to unpackage my Pringles chips in order to save space, repack my food more efficiently.  It was good to laugh with someone over those things, start this trip with a relaxed mind, feeling that I had the resources I needed, if it came down to it.  Prepared enough to relax.

It came time to say goodbyes, and I thanked my friend for the drive there, told him it had been a fun ride.  He said, “Not as much fun as you’re about to have.”  I laughed and hoped that it would be fun, in some sense.

The shuttle was a truck driven by a volunteer retired from a career in retail, and carrying three other hikers besides myself.  The mood was pensive, as we were carried into an increasingly open desert landscape.  When the road changed from pavement to sand, driver Doug turned to us and said, “Ready to go out to the Hinterlands?”  The Australian hiker next to me dryly answered “No”, and we laughed.

It was a landscape of Joshua trees, ocotillo, creosote, sagebrush, sand and sky.  Occasionally Doug paused to point out a supply of water that we would be hiking by in coming days.  The CDT was visible in these areas, then quickly disappeared into the blur of desert beyond.

After several bumpy miles, we made it to the Crazy Cook Monument, not far from a barbed wire fence dividing New Mexico and Mexico.

After a few photos, we each made our remaining pack and clothing adjustments, then set off, under the blazing sun.  Doug stood by until the last of us (me) started down the path.  I had asked him what precipitated his volunteering with the CDTC shuttle service (what inspires a person to give hours driving strangers down a bumpy road?) and he said wistfully, “Someday, this may be me, you never know.” 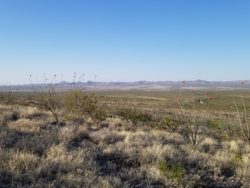 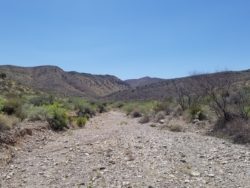 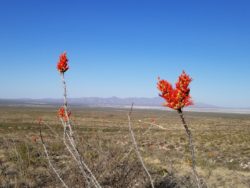 So I set off into the Hinterlands.  Such open scenery, I just kept looking around and smiling, it was so different from anything I’ve hiked through before, sparse desert on a different scale.  It reminded me of places along the PCT (Scissors Crossing, the aqueduct stretch) but so expansive.

The trail started out in a great basin, then climbed gradually into desert hills, around large Hachita Peak and the Little Hatchet Mountains, a significant marker that I’d be able to look back on for days to come.

My first goal was hiking to the first water cache, 13 miles away.  Hiking over sandy trail proved tough on the hips and feet.  I stopped and took breaks every few hours, in infrequent shade patches.

In the beginning, I could see the other hikers from the shuttle ahead of me.  Soon two of them pulled ahead, and I caught up to the third, breaking at the initial water cache.  We hiked together for a few miles, before breaking off into our separate paces.

I reached the water cache by late afternoon.  The other hikers who had been on my shuttle were also there, refilling, talking.  There was a choice to hike along a dirt road for the next few miles, or stick to the Continental Divide Trail.  Doug had told us on the drive in, “9/10 hikers choose the road, it’s easier.  I recommend the road.  The trail is overgrown.”

I decided to attempt continuing on the Continental Divide Trail, and was pleasantly surprised.  The trail wound up and along hills, overlooking the valley below.  Though it was less defined than a road, a blessed wind moved at that height.  I looked down to the road below and felt glad not to be down in the dust, with less of a view. 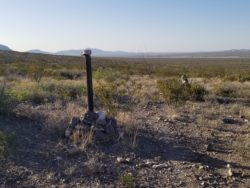 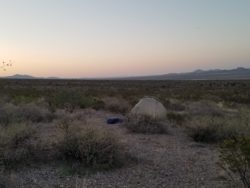 I met a few other hikers towards evening, in a limited camping area, hiked a bit further, and camped in a spot with a good view of the basin below, rimmed by mountain ranges in all directions.

Throughout the day, all the familiar habits and acts of thru-hiking came back to me- the slow pace of moving over land on foot, under a heavy load, slowly changing landscapes, frequent snack and rest breaks, meeting other hikers along the way who share the same journey.

It is good to be out here again.