This is the heart of Basque Country.  I don’t know a whole lot about the culture, (you can look it up on Wikipedia, and should!) but I know that the language is one of the oldest in Europe, maybe even the whole world.  So far I’ve learned that ‘agur’ means ‘thank you’, ‘milaesker’ means ‘goodbye’, and ‘egunon’ is the common greeting ‘hi’.

So, egunon and agur for reading this update.  This trail is turning out to be spectacular and I’m so excited to keep exploring it! 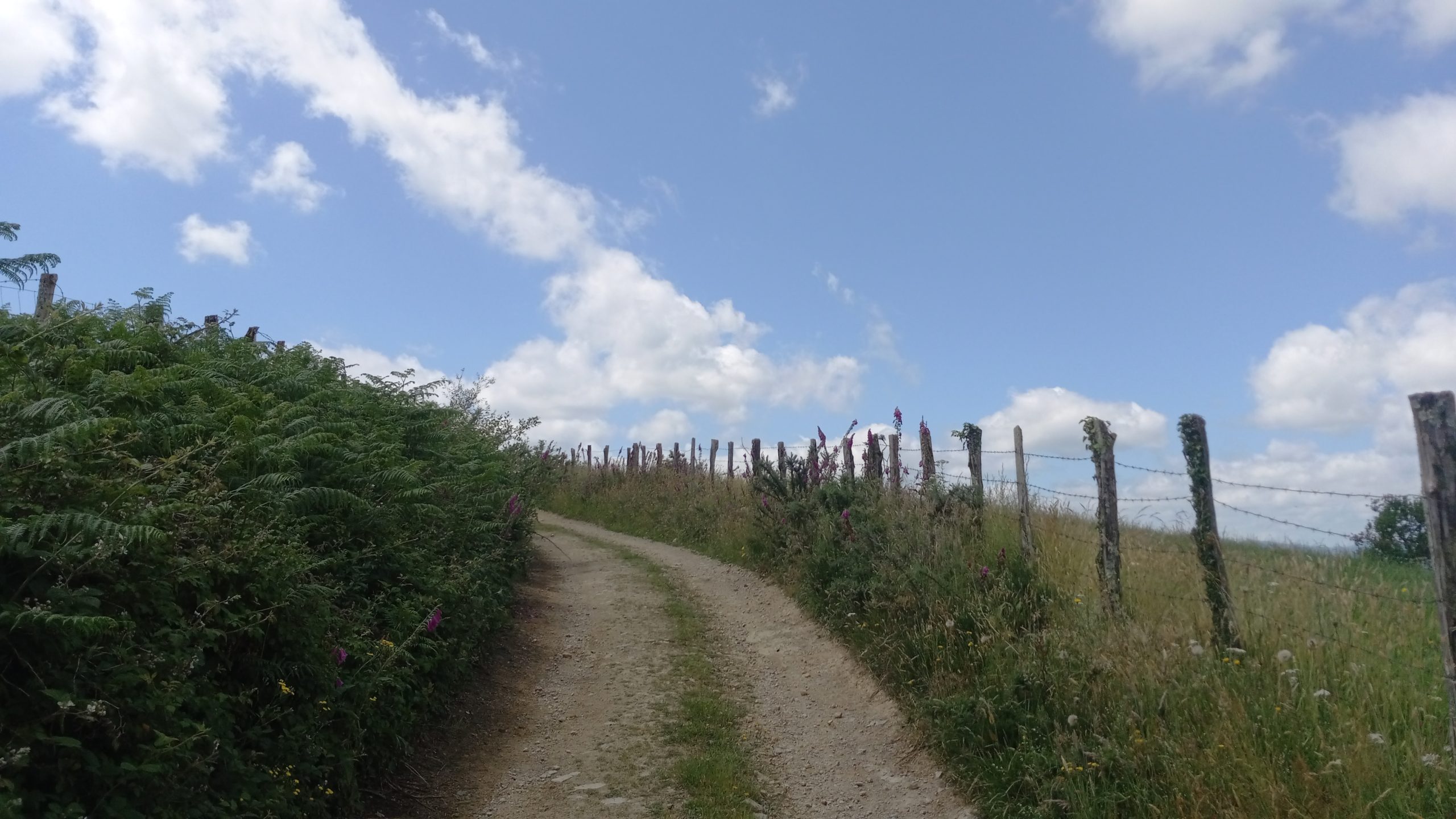 I saw eight miles as the total for today and that was a big part of why I got a room the previous night.  Sleeeeeeeping in!  And oh, it was so nice to saw logs in a feather bed until whenever I pleased.  I had an extra shower and a leisurely breakfast of bread and butter, yogurt and jam and took my time repacking my bag.

This was a Sunday, so nowhere was open, but the church would be for mass.  I decided to attend simply so I could get access to the inside, one of the only ways to do so in these old rural churches.  This one wasn’t overly elegant but had an upper balcony where the small choir sat and their hymns echoed beautifully.

After mass I started the climb in the noonday heat.  The first four miles would be steady but gentle up, followed by steady and gentle down for the second half of the day. 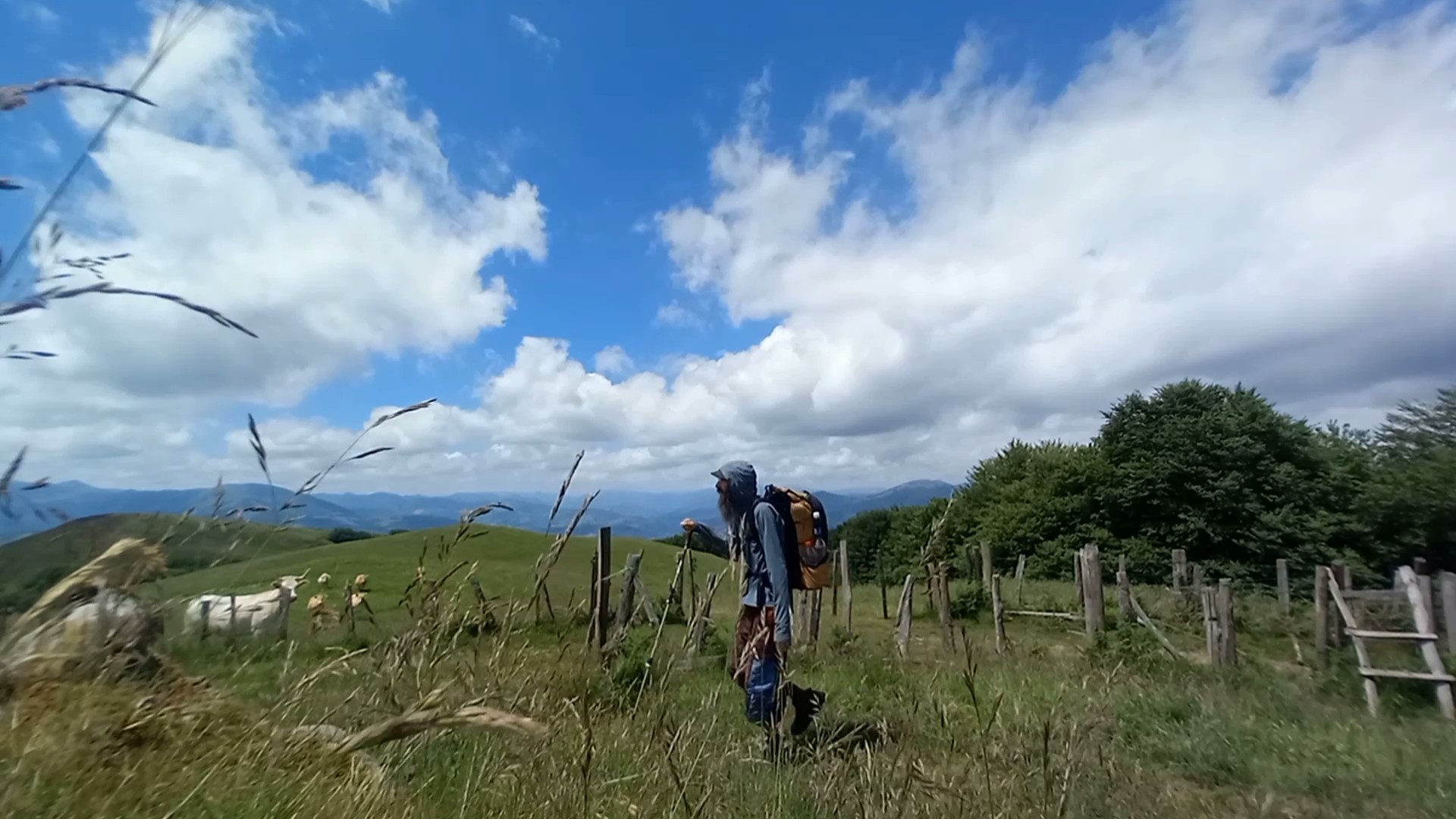 Near the top of the peak for the day (Burga) the road ended and the route led over a stile then through trackless cow pasture and into a primeval wood with ancient trees and giant boulders.  There were no trail markings and very little indication that anyone other than four legged beasts had been through it for many years. 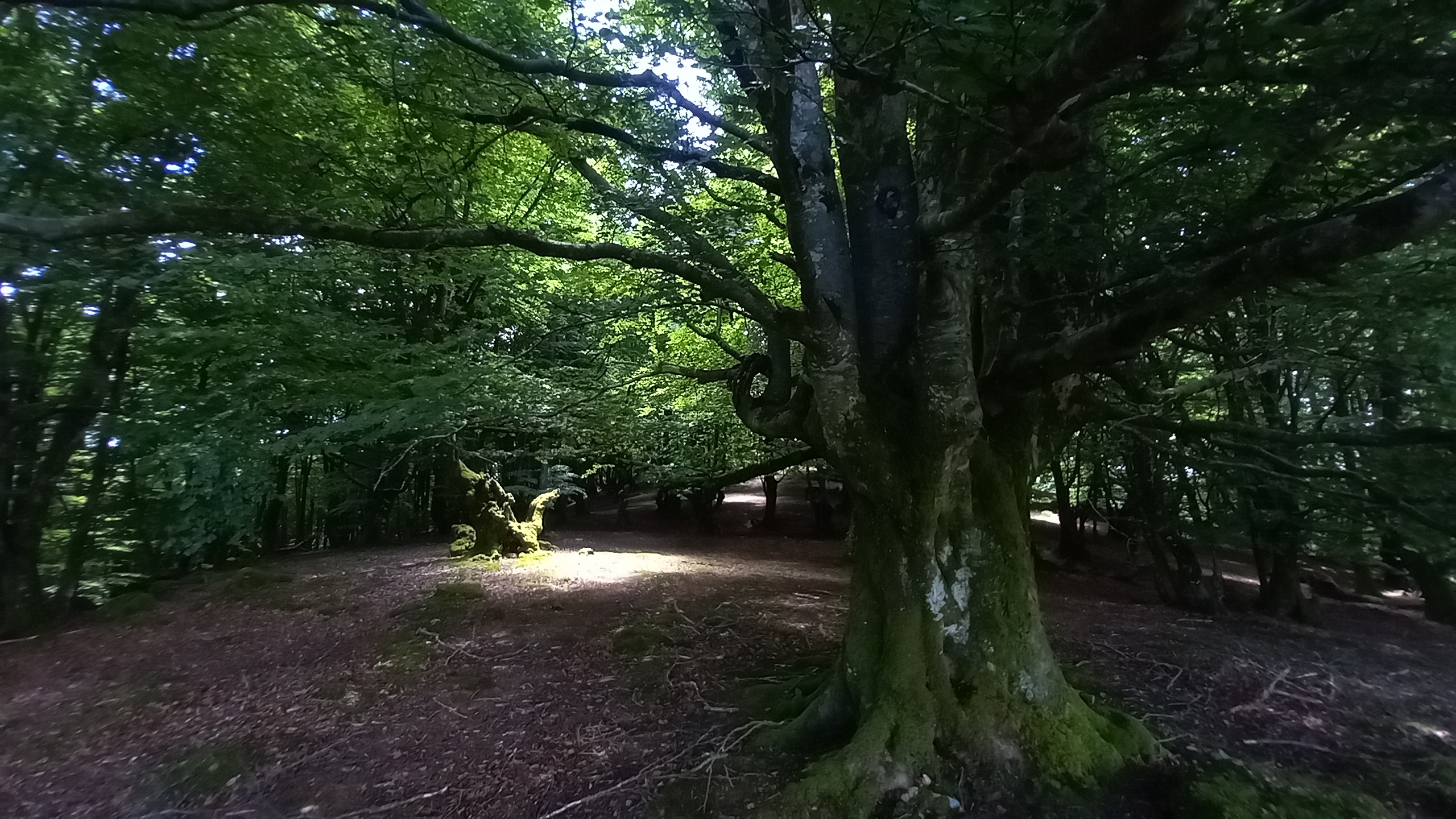 At the peak of the ascent the landscape opened to the south and there was a beautiful shade tree and a slanted rock, a most inviting lunch spot.

I couldn’t stay long because water had become an issue.  I hadn’t looked ahead and there were no fountains or streams for the entirety of the climb, so I was running low.  But I had time for some bread and stinky cheese, salty cured sausage and some nuts and raisins. 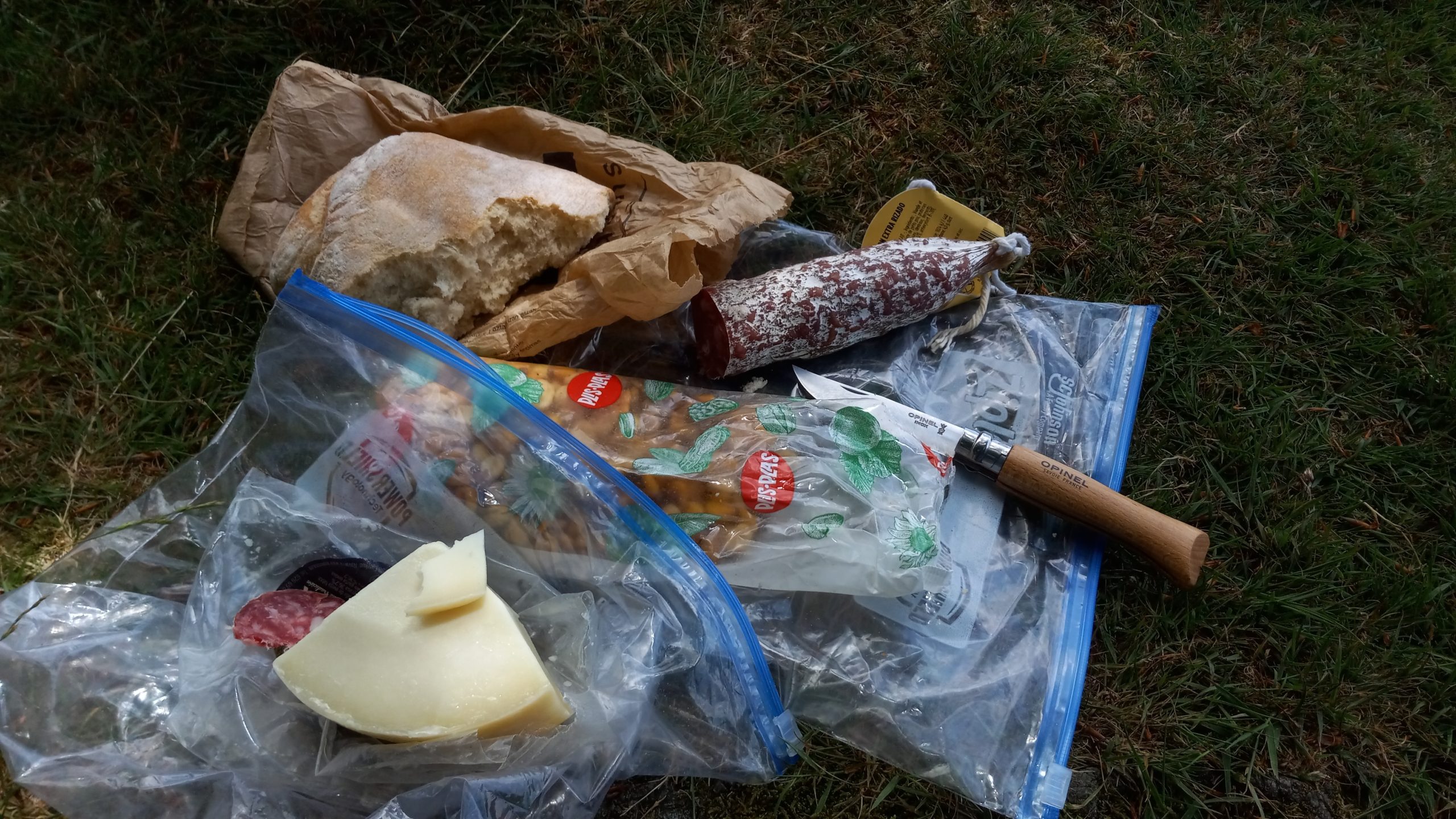 On the way down I found a menhir right next to the trail, a nice treat after the failed attempt to track some down the prior day. 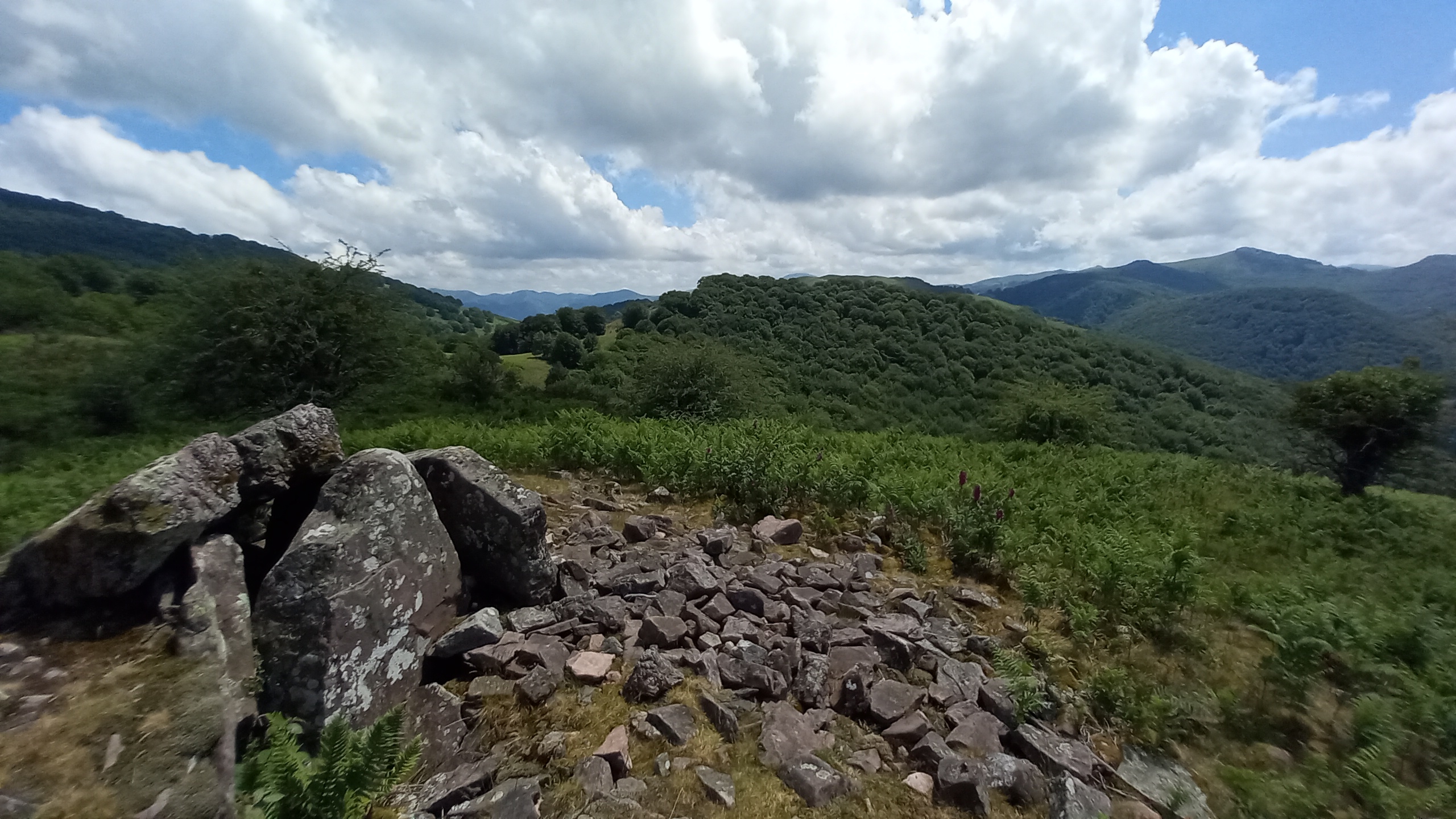 The final stretch of the descent into Aldudes was extremely steep tarmac with no switchbacks, incredibly straining on the things, knees, and ankles.

Fortunately at the bottom was a cool quiet river running through the little hamlet, so I kicked of my shoes and soaked my sore dogs for a good while before walking through town to see if anything was open and where I might pitch my tent for the night. 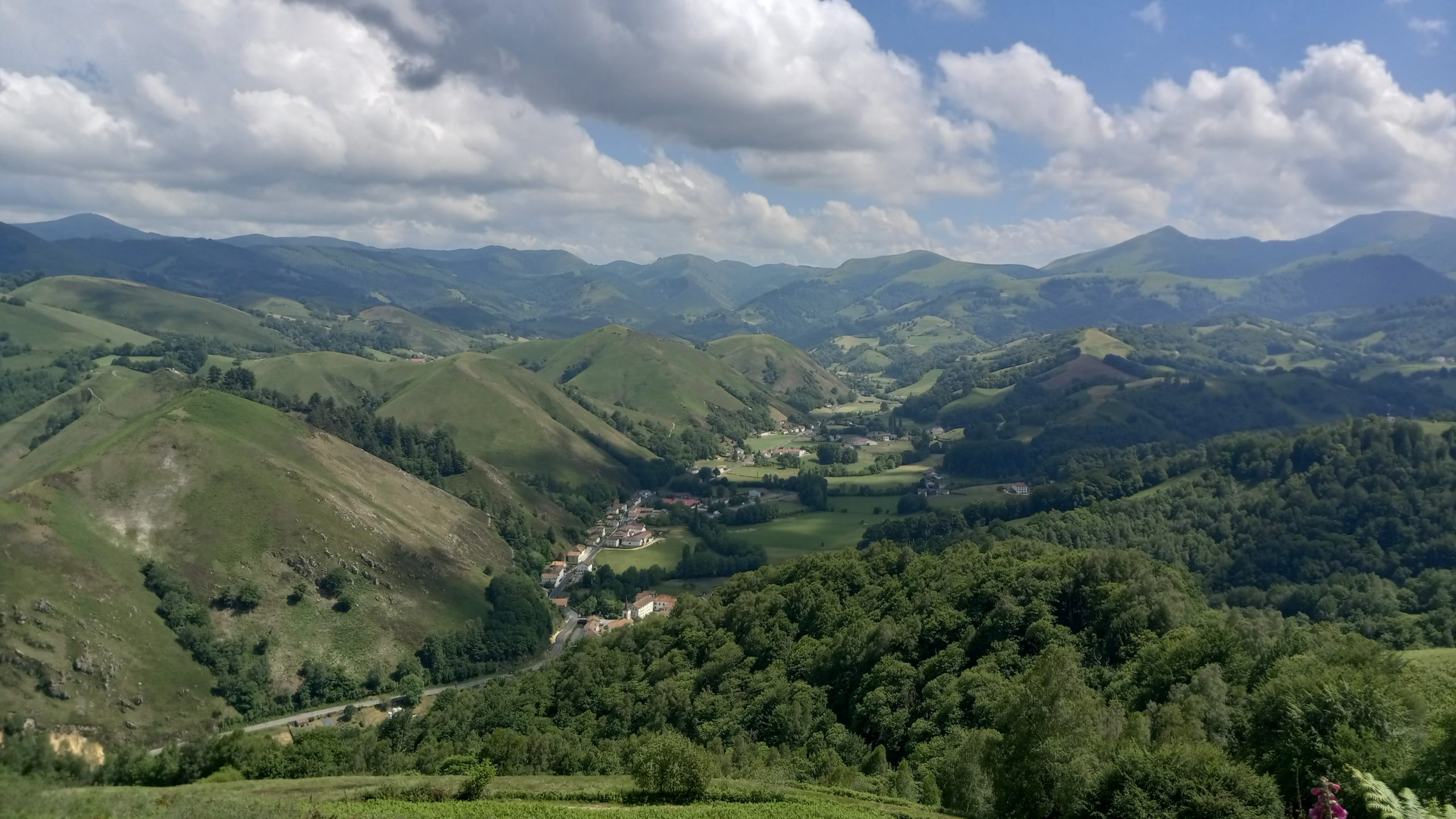 There was a nice picnic area that had a plaquard with a little tent symbol on it, a good sign.  I walked by and found an open bar to get some wifi, a glass of port, and two scoops of “artisinal” ice cream.

When I got back to the picnic area there was another tent set up.  As I was pitching my own the guy came over to admire my Tarptent Protrail, his was the two person version.  It turns out he is also walking the HRP!  Well, the first half as he has time constraints and already did the second half a prior season.  We spent a couple hours talking and decided to join forces for the coming few days at least.

My new hiking partner is named Juan, he’s from northwestern France.  He informed my that there will be very little to no resupply for the next few days and that he was going to try to catch a bus into a bigger town to buy food since the only place in Aldudes was closed on Monday.  I decided to go with him, though I probably could have made it with what I have.

We waited for the bus for an hour and when it didn’t come, discovered that it was a holiday and a long weekend so no bis at all.  We decided to forge on and figure it out later. 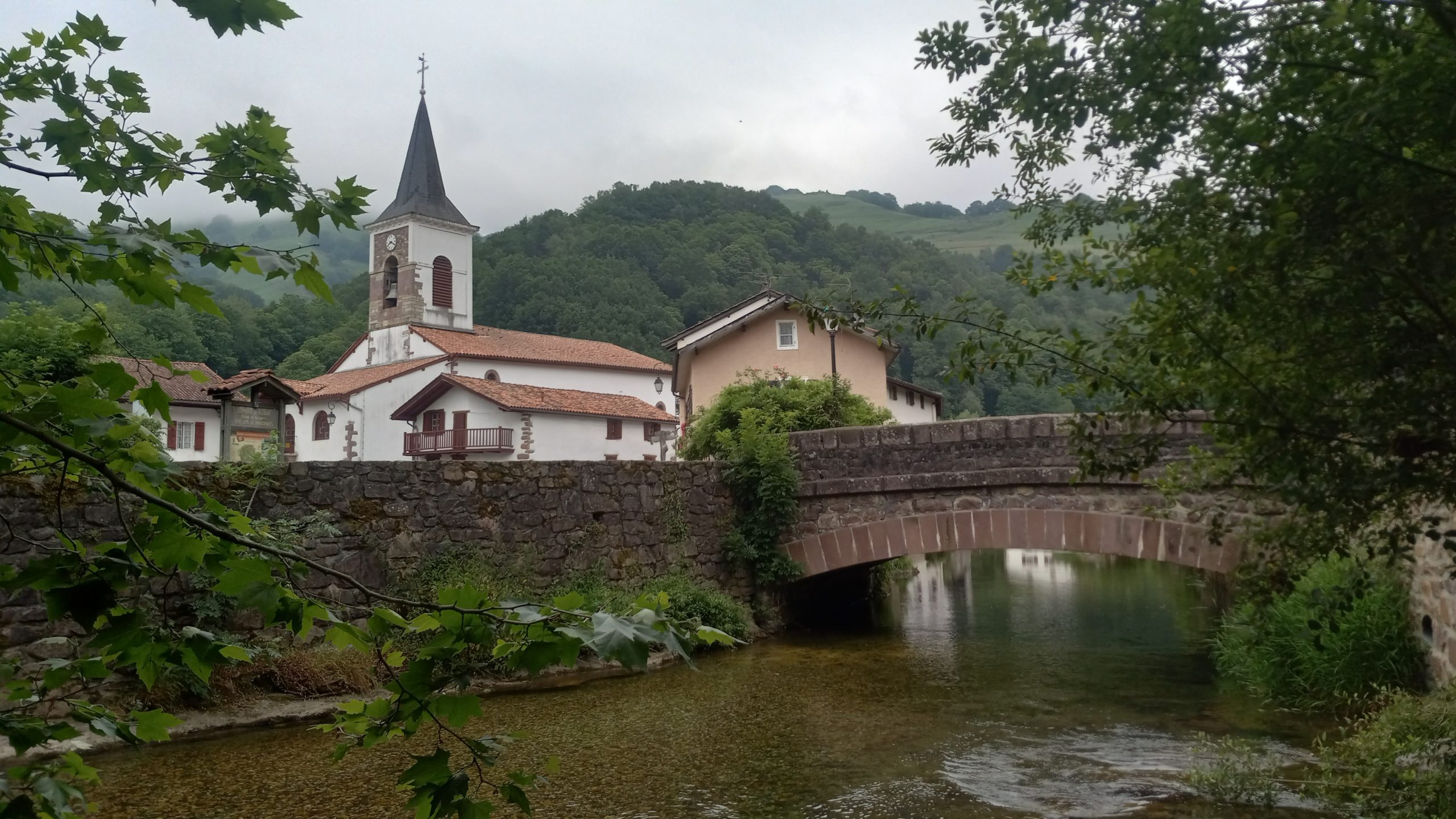 The departure out of town was up a hidden Harry Potter staircase, then up some rocky switchbacks and into the pastureland that makes up some much of this region.

The climb was steady and long, but at least this day there were more water sources and it was easy to stay hydrated.  The first highpoint, Col de Mizpira, had sweeping 360° views and reminded me of the balds along the southern stretch of the AT.  We took a moment for photo ops and pressed on. 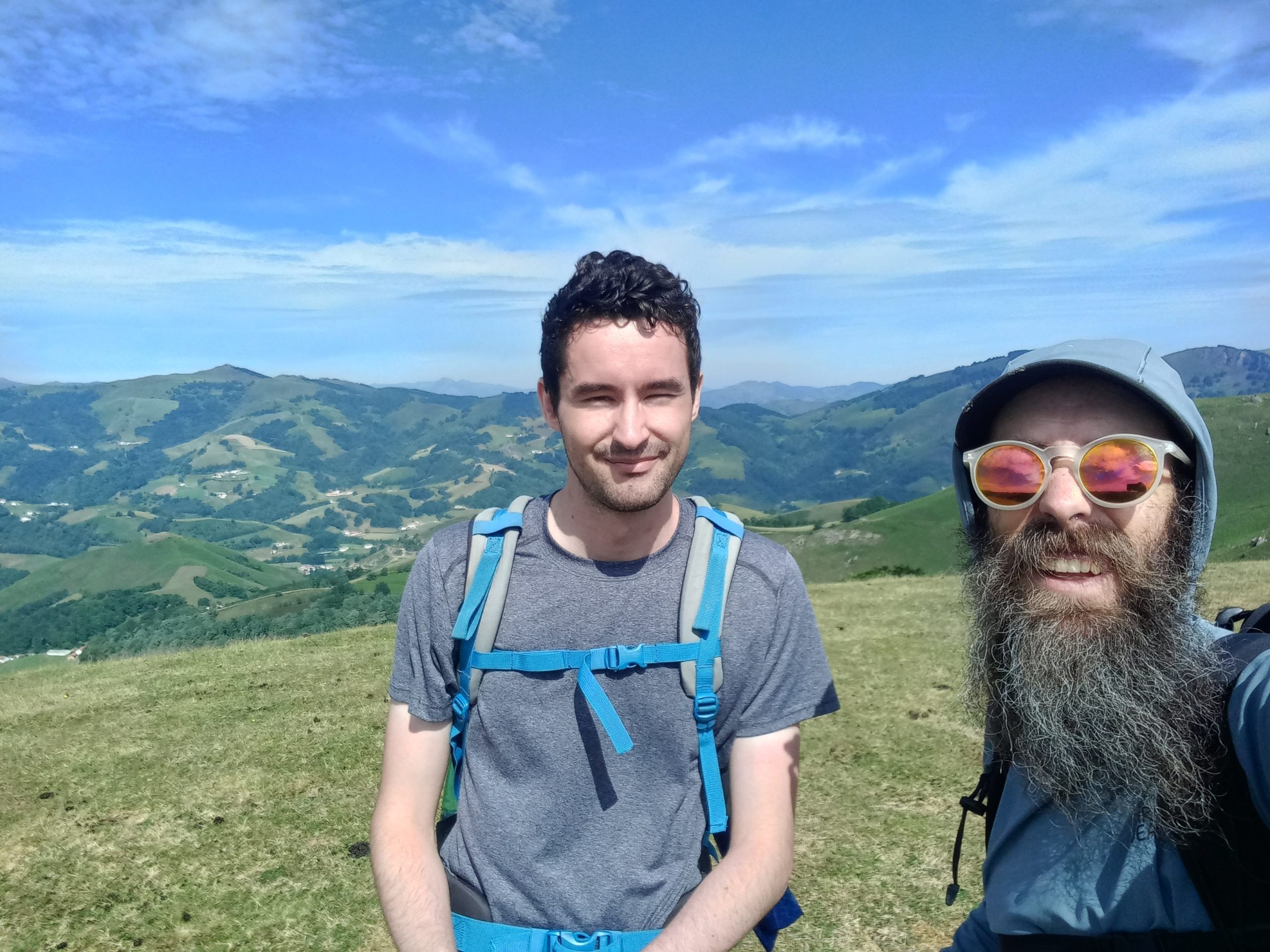 The descent to the next pass was steep, again, and this time had a crowd of humans vaccinating sheep and cutting grain at the intersection. 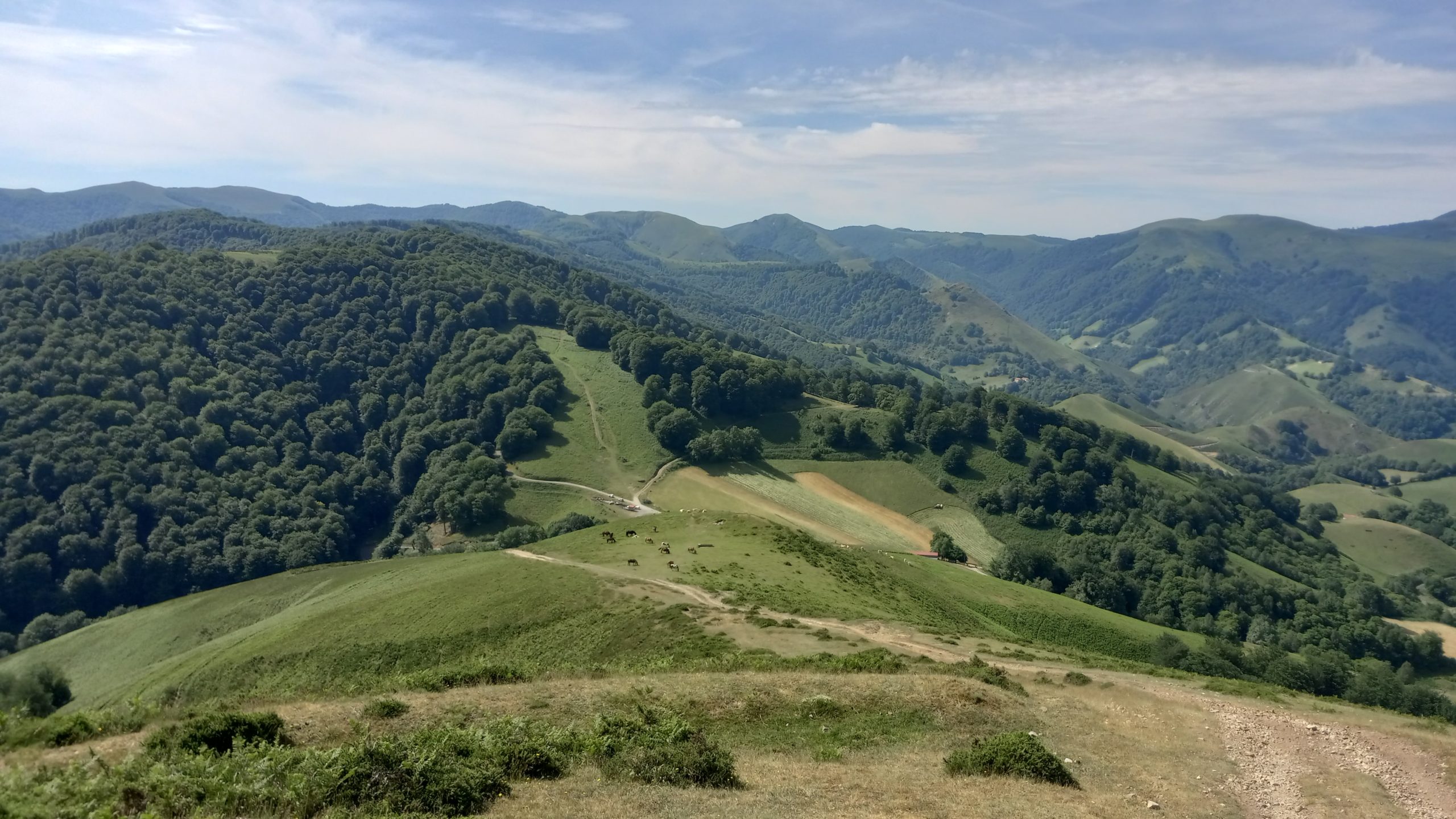 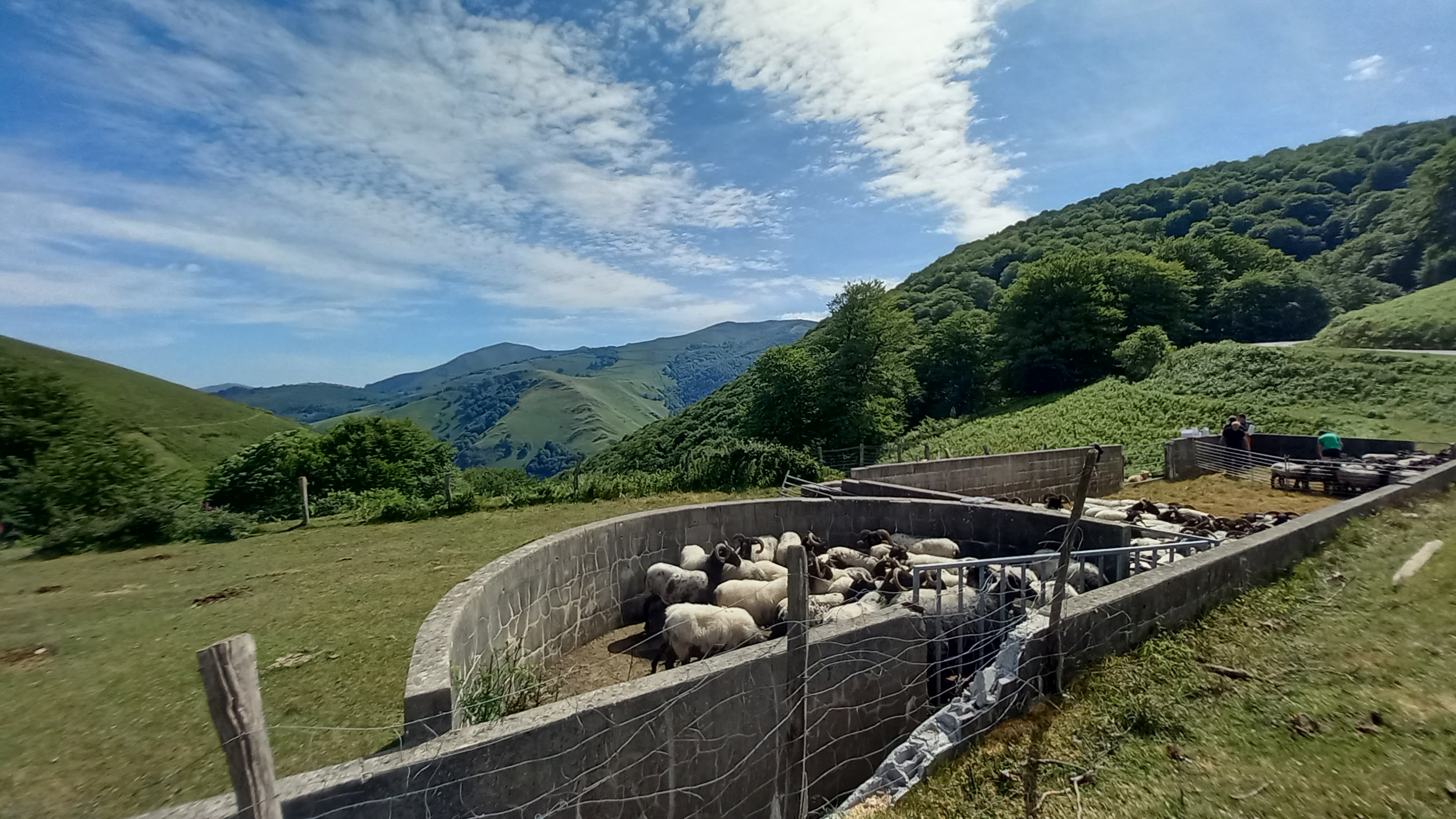 The trail climbed sharply up after that, past some hunting hides, then met up with a good quality new paved road which climbed gently for several miles.

We paused for a long water and snack break and a fountain we found, but the biting wind from the exposed hillside got us going again.  Near the top the trail branched off from the road briefly to peak out on the summit of Lindux.

The last push was the steepest yet, but short and the views were worth it.  Far to the East we could see the massive peaks of the inner Pyrenees that await us about five days walking from where we stood.  I took another quick snack and a nap before we headed down. 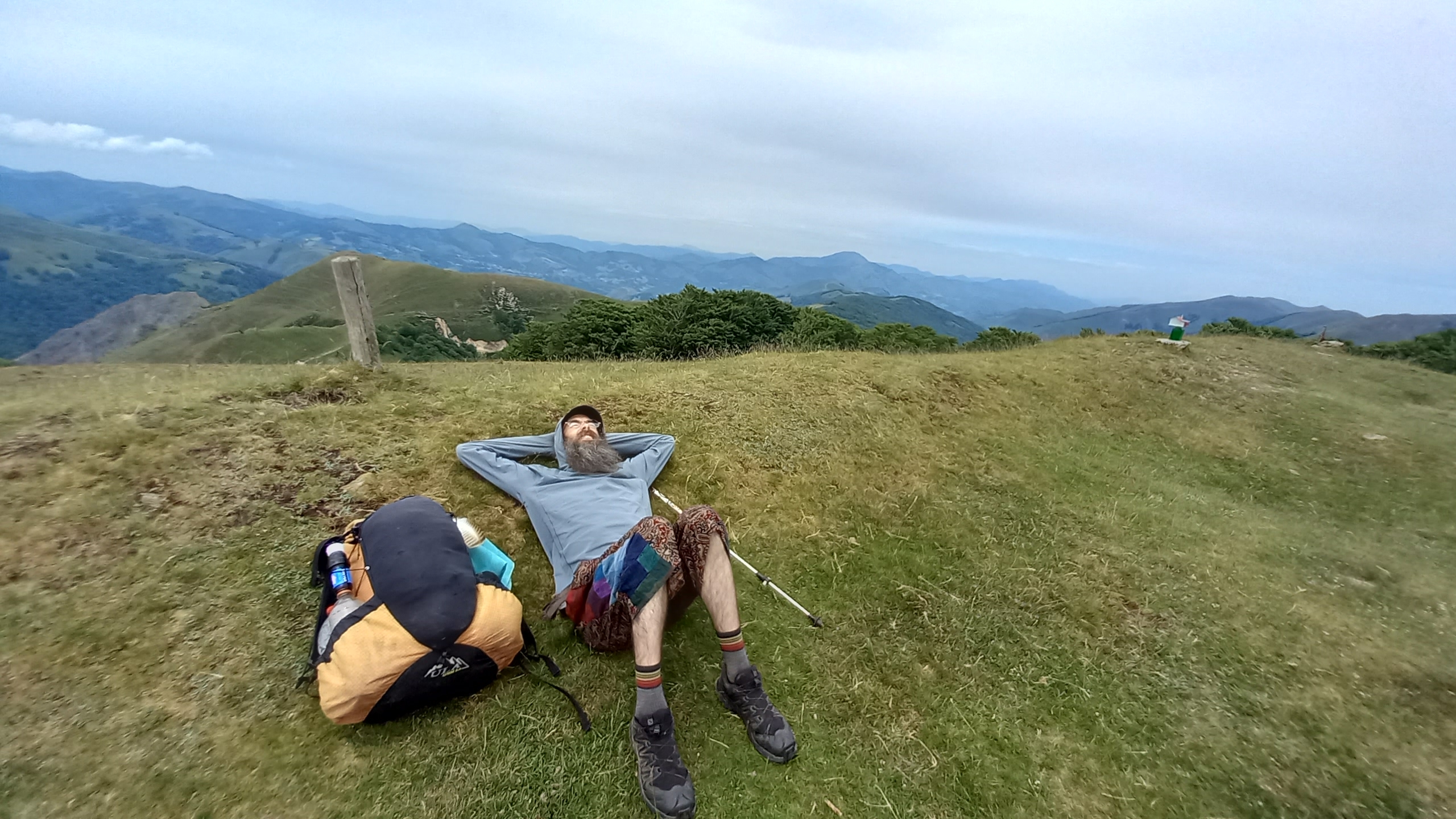 The descent brought us to the Camino Frances at Roncevaux Pass.  This was the sight of Charlemagne’s only military defeat, in 778AD when Roland, in charge of the rear guard, was ambushed by the Basque in retaliation for the destruction of Pamplona.

We joined the throngs of pilgrims and entered the sanctuary of Roncesvalles.   Immediately we headed to a café as it was beer thirty and got an entree and two sandwiches each.  The looks we got when they were delivered were priceless, and even more so as we smashed the burgers and packed away the sandwiches in plastic bags like good hikertrash. 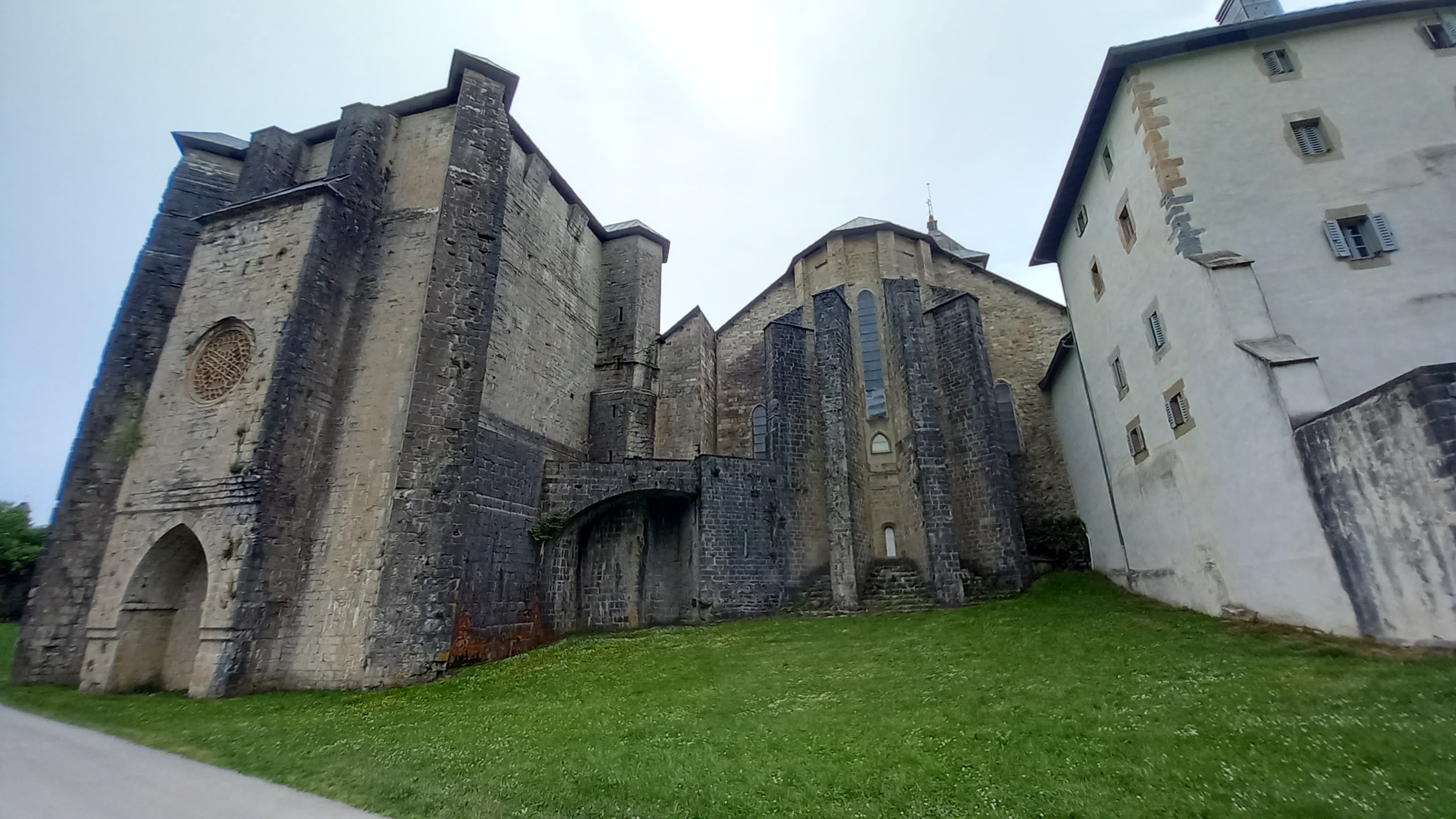 We should be good to go now for food.  Besides the sandwiches the bars here have candy and chips and some healthy snack food too (but who would choose that when you have chocolate and sugar!?)

We’ll be without connection for the next few days, so I’m guessing the next opportunity I will have to update will be five days out, in Lescun.  Stay safe and happy trails!  Milaesker, for now.