For those who don’t have a calculator handy, that’s a hair over 60-miles per day.

How? What? Really? How again?

We caught up with Bentz to answer these burning questions, and more.  Our exchange is below.

BONUS POINTS: Be sure to check out the mini-documentary at the bottom of this interview which chronicles this incredible feat. 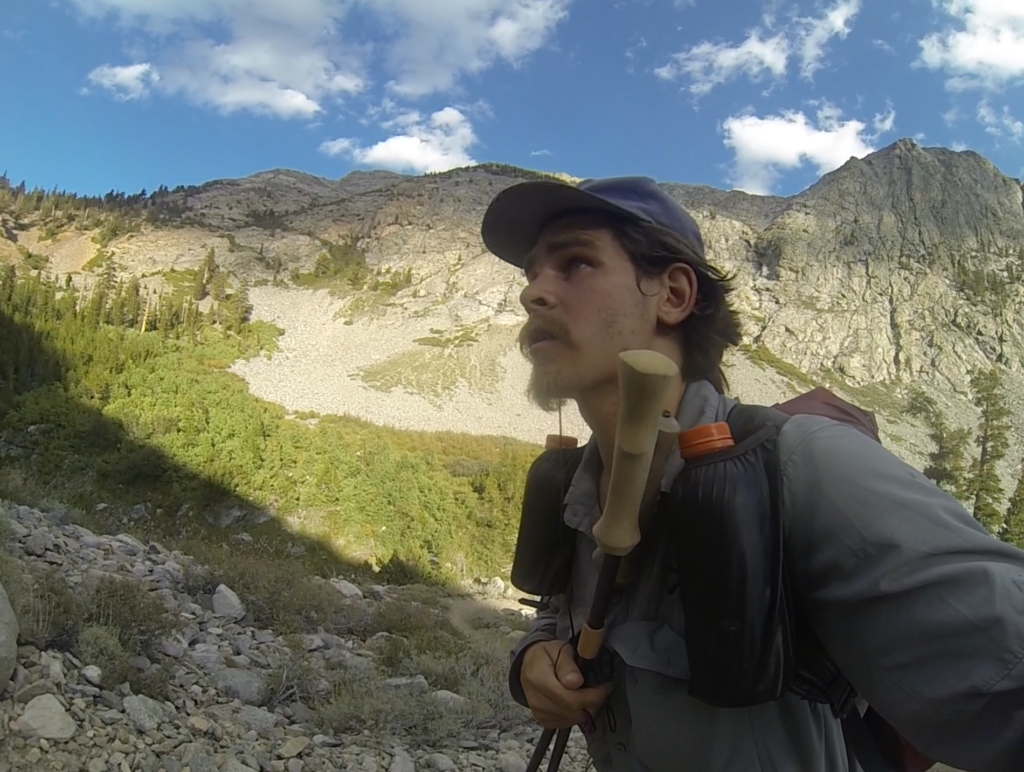 Andrew Bentz: I grew up backpacking in the Sierra Nevada Mountains. First it was Boy Scouts, then my dad started researching about UL backpacking and we started to go lighter and longer.

AT: What made you want to take on the JMT FKT?

Bentz: When I first hiked the JMT I met Reinhold Metzger, who was the first one to start doing speed attempts on the JMT. He looked at me and told me something along the lines of me being the next one to hold the record. It sounded so intriguing; putting minimal gear and food into a little pack and just going. Ever since then, in about 2009, it has been something in the back of my mind.

AT: What made you confident that you could accomplish it?

Bentz: Hiking the PCT in 3 months the same summer gave me the confidence to hike big miles. I figured that if I had been walking an average of 30 miles each day, and only focusing on that, I was pretty much a professional athlete without the title. Also the familiarity I had with the trail gave me a large confidence boost.

AT: What was the previous record? Who held it?

AT: Had you hiked the JMT before?

Bentz: I hiked the JMT in two weeks just before my senior year of highschool, then after my freshman year of college did it in 5 days. Then basically another complete hike of it while on the PCT, and many section hikes of it over the years with my family.

AT: What was your goal for time?

Bentz: I was trying to beat, or get close to the supported record that is held by Leor Pantilat at 3 days 7 hours 36 minutes.

AT: How much did your pack weigh?

AT: What gear did you carry?

Bentz: I carried a self made pack that provided excellent access to needed gear, food, and water without having to remove the pack. For a sleeping bag I had a 40 degree montbell spiral down hugger. For my pad a very small, cut down Therm-a-Rest Z Lite. I had a Columbia Safari Shirt, nike running shorts, and my signature Dodgers baseball cap. For warmth I had a Frogg Toggs jacket and a buff. I did not carry a shelter, and would have used my polycro ground tarp for rain protection if it had rained. I carried a Phoenix clip on flashlight.

AT: What did you eat? How many calories per day?

Bentz: I ate (drank) powdered maltodextrin with gatorade mainly. This has been a main staple of mine throughout the years of endurance hiking and running. Other than that I had a couple pro bars until they began to make me gag, some candy bars, and salty snacks such as cheez its.

AT: Did you stop to filter water? If so, what treatment method?

Bentz: I never filtered my water, and rarely do in the Sierra.

AT: What was the hardest part of the trail, terrain-wise?

Bentz: The hardest part of the trail was definitely the first day. All in all the trail is pretty mellow because it is graded so well, but the elevation change on the first day was pretty huge. I went over 5 major passes and summited the highest peak in the contiguous United States. I was stumbling all over the place at the end of the first day which was 70 miles. 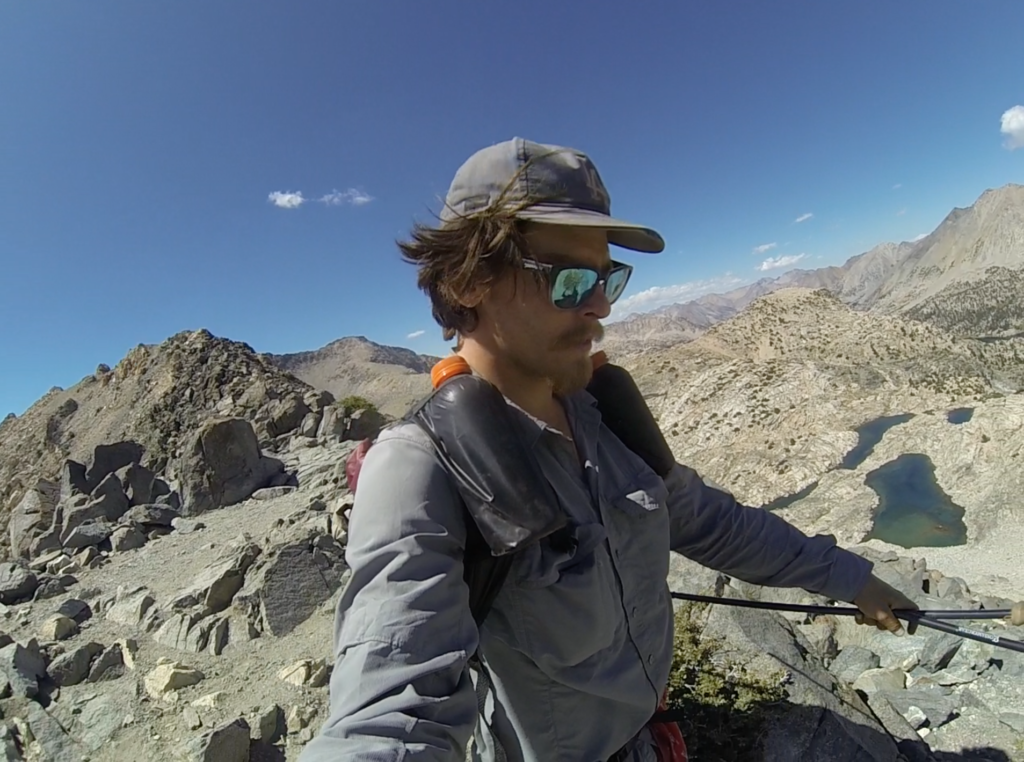 AT: What was the hardest part of the hike mentally?

Bentz: On the last day, I slept in 3 hours too late. I woke up having made so much progress and thought I had lost it all. It was pretty devastating to have made all that progress and then to realize it could have all been in vain. I started making some mileage calculations and realized that if I just hiked further into the night (morning) than I would have normally, I could still make it.

AT: What surprised you the most?

Bentz: I was surprised by how much my body hurt. After every hour or 3 hour rest I took I woke up in more pain than before. My knee felt pretty injured, I had feverish symptoms basically the whole time, and I had a general soreness throughout my body. I guess you can only prepare so much for that sort of mileage.

AT: Did you tell a lot of people you were attempting this?

Bentz: I only told close family and friends. I have a thing where I think I will jinx it if I announce it beforehand.

AT: What shoes did you wear (if not covered above)?

AT: What part of your body hurt the most?

Bentz: My right knee. At times I had to limp, but once I got blood flowing it felt ok. I was not proud of the fact that I was essentially injuring myself.

AT: How much sleep did you get?

Bentz: I slept a total of about 11 hours, with one small nap each day in the middle of the day.

AT: Do you recall your mileage for each day? If so, what was it?

Bentz: First day was around 70, second was 63ish, then it was basically a 90 mile push to the finish with a 2 hr nap in between. 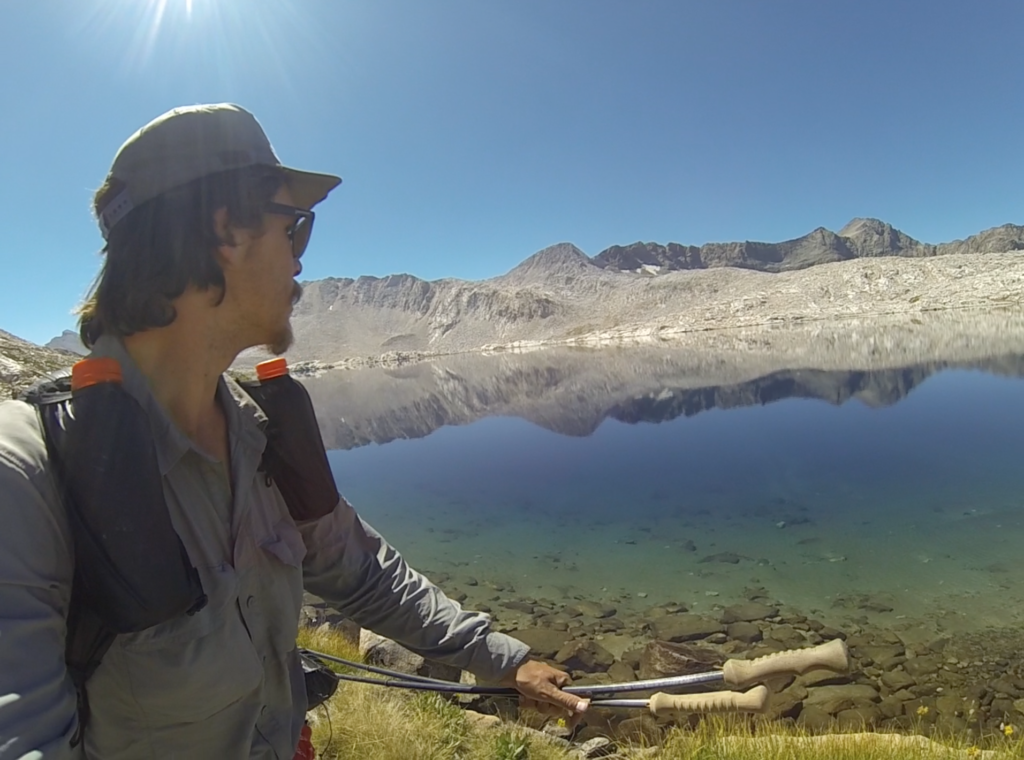 AT: If you could, would you have done anything differently?

Bentz: I have thought about not taking a sleeping bag during the hike and only resting in the day. I probably shouldn’t have rested for 2 hours when I was just over 20 miles from the finish. It also would have been interesting to see what kind of time I could have gotten had I not overslept after the second day.

AT: Did you ever question what you were doing?

Bentz: I never really did. I can’t recall being more motivated and confident to do something than this. I had been visualizing the trail for months or even years, and knew it was time to get it.

Bentz: I have decided to dedicate my distance hiking and running skills to becoming a professional Pokemon egg hatcher. For only 5 dollars I will bring your Pokemon go device with me on runs to log mileage to be able to hatch your Pokemon.

AT: Where can people go to learn more about you and your upcoming journeys?

Bentz: Instagram and facebook are my main outlets:
Instagram: hikermeng Facebook: Andrew Bentz
Also, be sure to check out palantepacks.com for news about packs that I have made with a friend John Z. We will be releasing our first pack designs this fall.