Feeling high at the Sierras 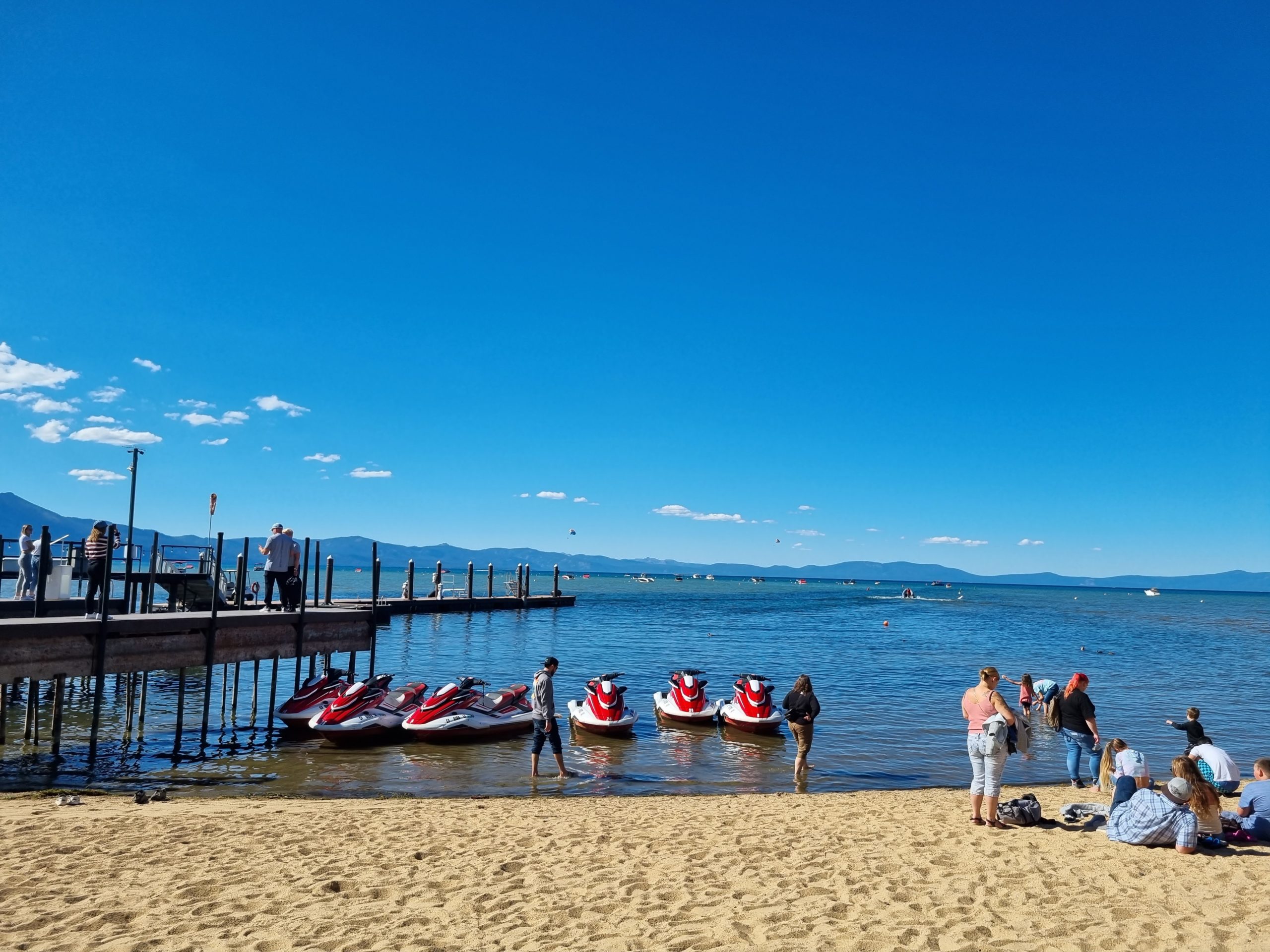 All night there was some latin music played at the campground and there were dogs barking and people shouting. I read in the Farout app that a bear had come and ripped a hikers quilt when they were sleeping at that campground so I didn’t sleep very well.

I had breakfast by the picnic tables and went to register myself. I was informed that the PCT hikers have a campsite a bit further so I packed my stuff and moved it to the site. I saw a hiker sitting there and it was Hoot. He had hiked crazy 40 and even a 50 mile day and was on the way back to the trail.

Hank messaged me that she couldn’t make it to the town before the post office that her resupply is coming to is getting closed so she’d have to zero until Monday. That was bad news as I really had set myself a deadline of leaving South Lake Taho by the 25th of September. There was still snow from the snowstorm from before at 10 000 feet and I was not looking forward to some more snowhiking.

An awesome trail angel brought me a free bear canister to the campground. Her wife had even made a bandana with the text “Whiskey” stitched to it.

I went to have a Mexican breakfast and then got to an outdoor store to get a groundcloth and a papermap. I got some resupply for the next section as well as some emergency whiskey. It got warm and I even went to a beach to try to swim in the shallow water. I ate an icecream bowl after that.

Back at the campground I tried to do laundry but the laundromat worked with quarters only though the whole country is somehow running out of them. I had to run to four different places to change some money before somebody did it for me against the rules.

I spent my evening charging the batteries and washing clothes in the laundry room that was at least warmer than being outside. 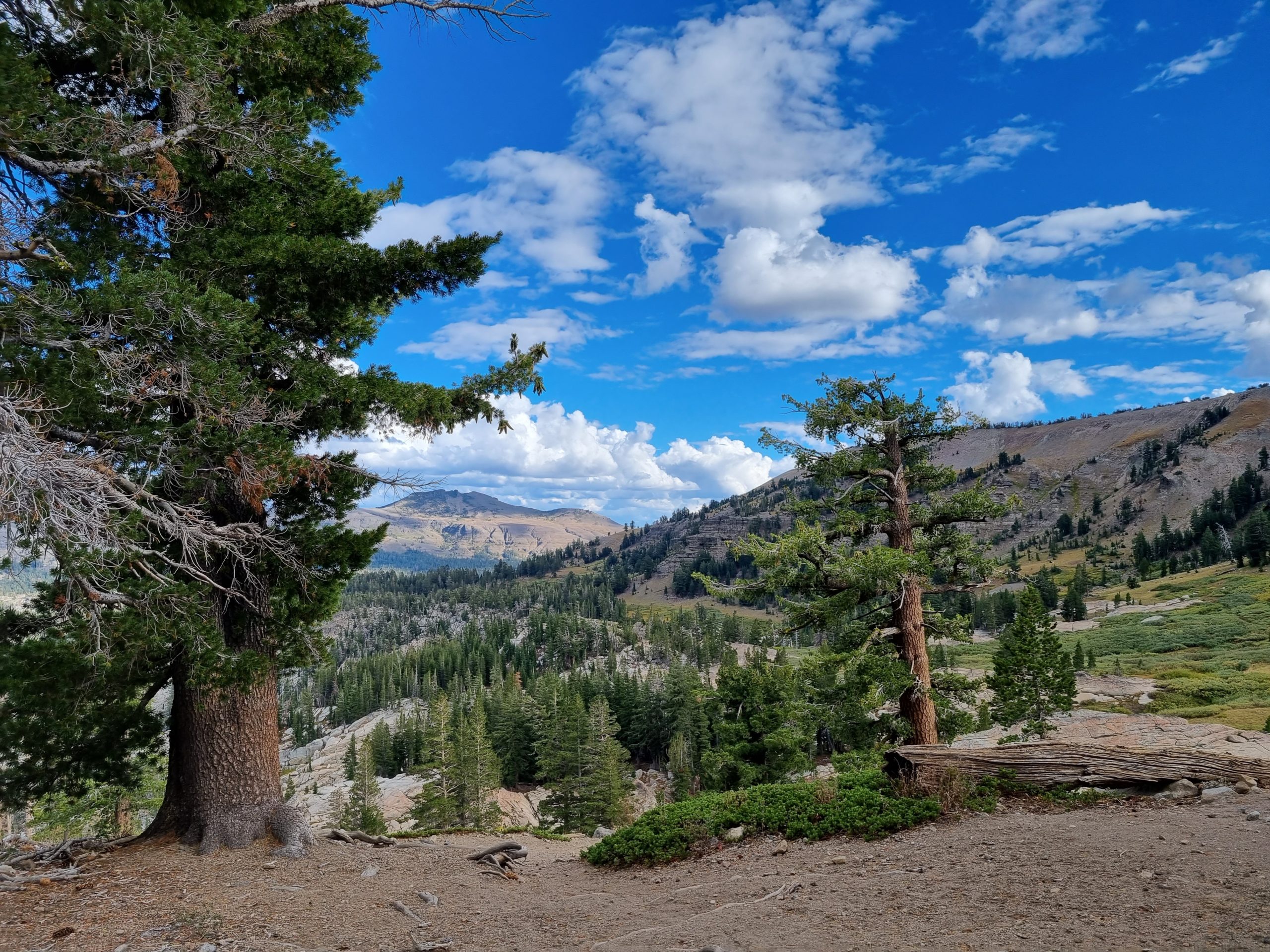 I woke up at 6 and went to spend my time in the lively laundry room since it was too cold to hang outside. Hank was trying to get a hitch from the trailhead and we agreed to meet in a nearby diner for breakfast. Finally she got a ride with an ambulance. Well hikerhunger is an emergency for sure!

We hadn’t met since Stehekin and had a lot to catch up. We had an awesome breakfast with crepes, hashbrowns and exactly the kind of food you dream of on the trail. We had surprisingly similar experiences on the trail, like being always the slowest of the tramily or getting caught in the snowstorm. We agreed to meet up at the Kennedy Meadows North at the latest if Hank shouldn’t catch up with me before that.

After the breakfast Hank went to enjoy her rare zero and I started to hitchike. It didn’t take too long before a nice couple gave me a ride and they also were in awe of me doing the thru-hike (or almost a thru-hike). I was compensating the skipped miles by getting of too early and walking an extra mile.

The landscape was amazing from the start and I felt I was really at the High Sierras. The trail climbed up to 8000 feet and then to almost 9000. I had not hiked that high up before and I was more out of breath than normally. I saw some dark clouds passing by and heard a thunder once but fortunately the clouds seemed to rain down further down closer to South Lake Tahoe.

The lakes and mountains were really cool and sometimes the landscape was like out of a Western movie. I met a couple of section hikers during the first miles, some women who were hiking 50 miles in four days and a 1980 SoBo thru-hiker.

The last hours I had no company. I had dinner by the abandoned Meiss Family Cabin from year 1878. It was kind of spooky and I swear I could hear voices of children although there was nobody around. It was too spooky to camp there so I hiked on to a cool meadow to camp early. 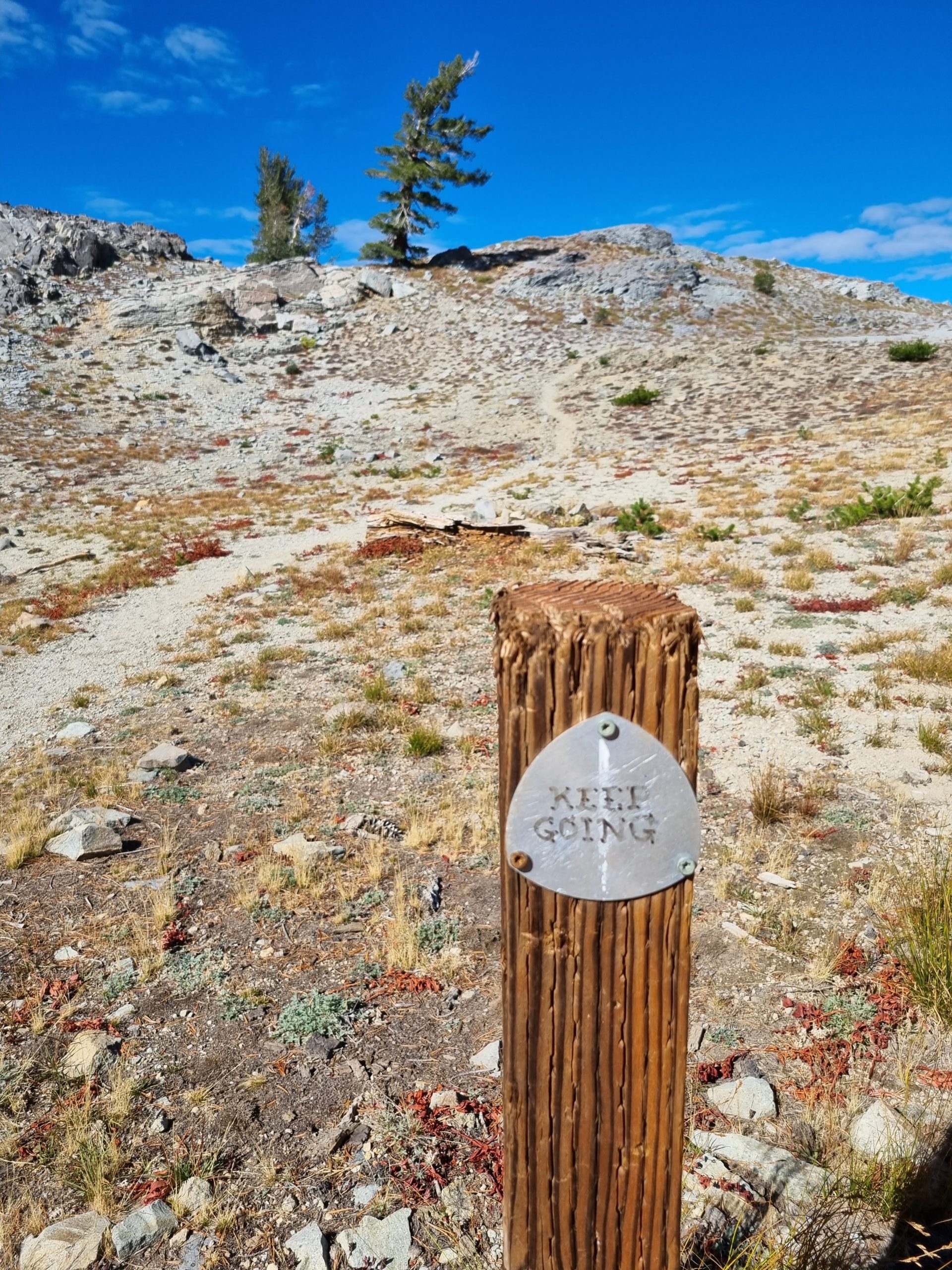 I got up before 6 and started hiking. The landscape was the most amazing I had seen so far. It was changing continuously. It was a lot of up and down and I started feeling the altitude. I was having a constant headache. When I got to camp I was beyond exhausted. I realized I was effected my the altitude and decided to hike a bit shorted than anticipated the next day.

I met the whole day only one NoBo 2021 who was completing her hike with this section. 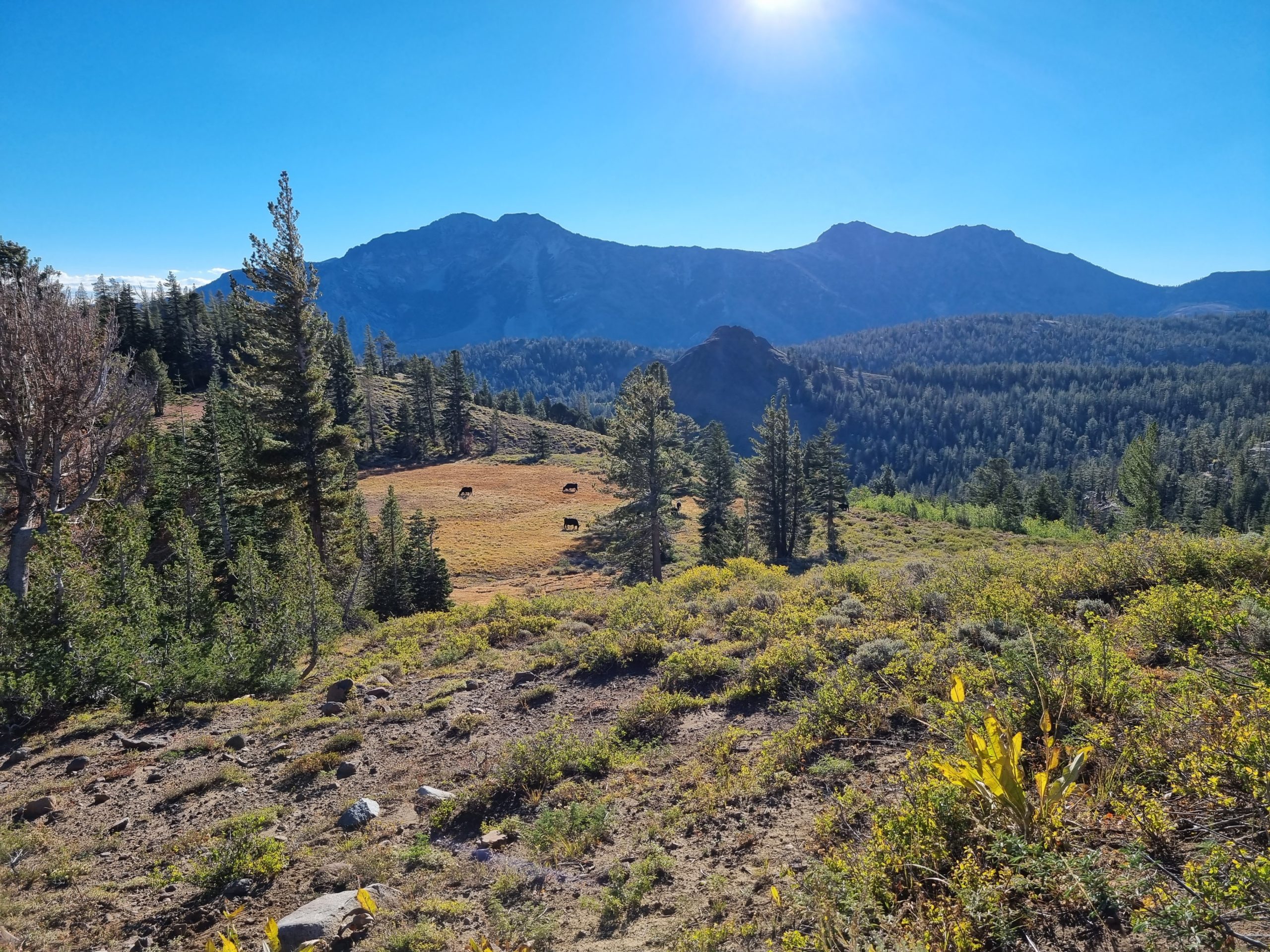 For once my watch alarm was working and I woke up before six. I filtered some water and packed up my bear canister.

The landscape was absolutely amazing and I had to say “Oh my God!” loud several times during the day. As the sun was going up I saw an animal on the path coming towards me. A wolf! It was happily jogging on and when it saw me it got off the trail jogging into the woods. The wolf with the amazing mountains and the sunrise could have made a great picture.

It was a lot of climbing but this was one of the most beautiful days on the trail so far. The mountains were like from another planet and there were some beautiful lakes between them. It was occasionally very windy and I was afraid to get blown off the trail.

I was really tired and could have fallen asleep anywhere. I tried to take a nap at lunch but there were too many ants. Unbelievable that 9000 feet altitude could get me altitude sick, it was like having pms and a hangover at the same time. After eating a lot and drinking some electrolytes I felt slightly better and I could cross my first 9300 feet mountain. I met a few section hikers of whom half were asking if I had seen Kate. No I hadn’t.

A man camping already at 2 p.m. said that I couldn’t make it over the Sierras before the winter would come. Well definitely not if I’d camp already at 2 p.m.! He said he wanted to do the PCT but he hadn’t yet so I took his advice with a pinch of salt. The winter might come any time to the Sierras but on an average year you can make it if you get over the highest pass by mid-October. I met also a Swiss hiker who hadn’t met any people the whole day and was therefore talkative. We were talking of how annoying it is that there is no free camping in the USA like in our countries.

The sunset was the most incredible I have ever seen. I hiked past Paradise Valley junction and set up the camp in the dark at 7.30.p.m. 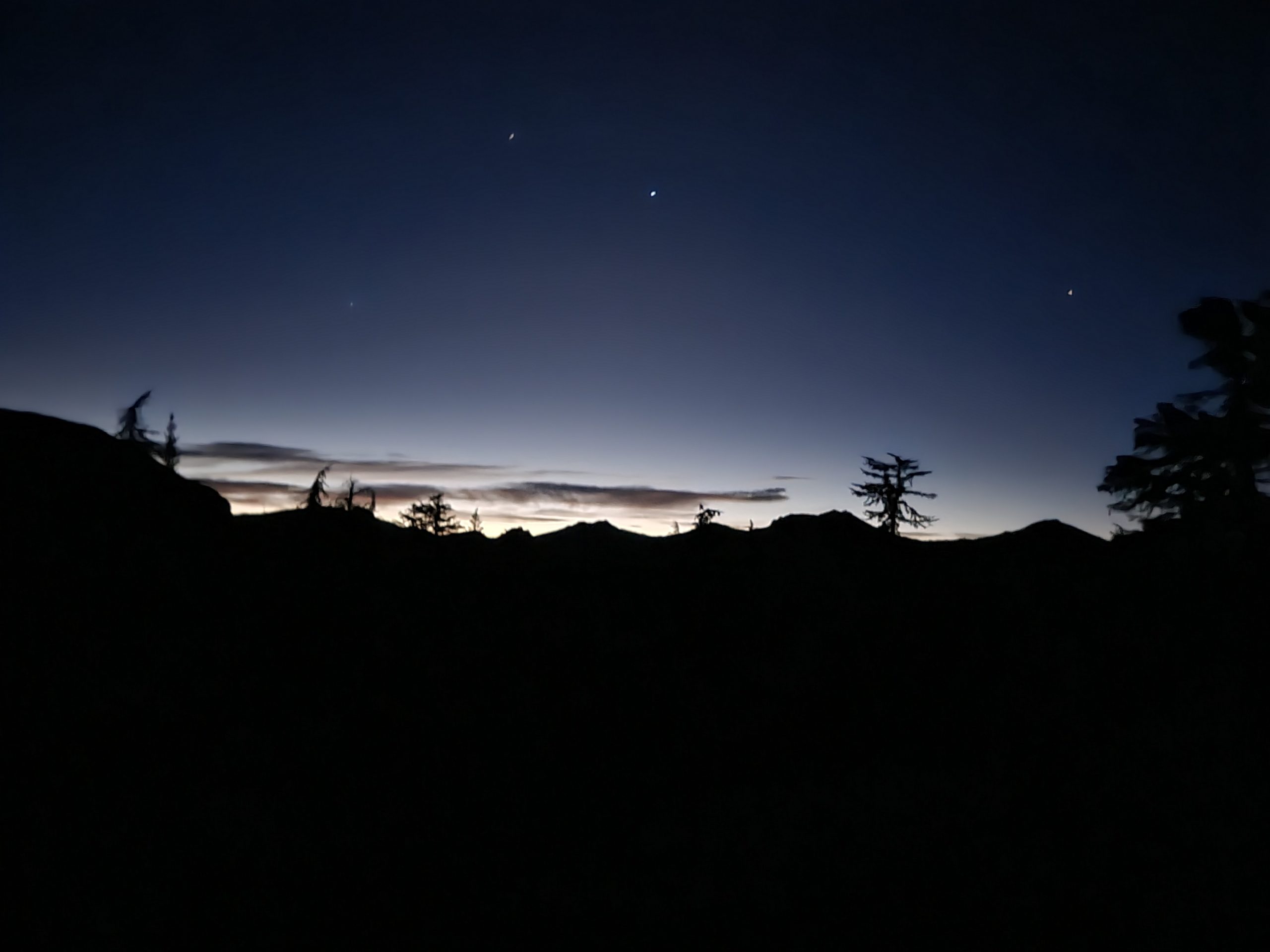 The alarm went on at 04.45 and half an hour later I was hiking under an amazing starry sky. I was playing some Abba as bear/mountain lion precaution and was amazed by how stupid some of the lyrics actually are. Just listen to “Honey honey” and think about it.

The rest of the day I was hiking in a mindblowing scenery and listening to an addictive but a bit miserable audiobook. I crossed my highest pass so far, Sonora pass at 10 500 feet. It was super beautiful. Down by the road I saw four other hikers waiting for a shuttle. I arrived there just 30 minutes before one of the two shuttles of the day go down the 10 miles to the resort.

The resort is a very stereotypically Western ranch with people in cowboyhats and stuffed animals on the walls. I took a bed in a dorm and the other hiker sleeping there turned out to be Nine Beers! She had skipped a section and was having trouble to get up in the mornings. Meanwhile Hank sent a message that she had zeroed in Tahoe and would probably be at the resort the day after. I’d have to keep on walking the High Sierras on my own. The next strech to Mammoth Lakes would be 110 miles crossing passes that are above 11 000 feet.