Excerpt: A Good Place for Maniacs – Dispatches from the Pacific Crest Trail

The following is an excerpt of A Good Place for Maniacs: Dispatches from the Pacific Crest Trail, by Chuck “Stoic” McKeever, who completed the PCT in 2016.

After another brief struggle with myself against the cold…

I get out of my battered tent to face the frigid morning. The mountains to the west are already awash in the rose-gold glow of sunrise.

Walking warms me up, but it doesn’t last. I step carelessly onto one of the rocks that bridge a small creek, and I eat shit. Down into the water. I bark my shin and soak my puffy and my pants in one go. It doesn’t hurt anything too much besides my pride, but I curse my own stupidity nonetheless.

Some time later we have cause to put on our microspikes, and we begin climbing the snow-covered path to the top of Donohue Pass. I walk behind Sweetcheeks and two hikers I met back in the desert named Worm and Mr. Clean, and the wind rises again with a fury. Minutes pass; an hour. We are still walking upward into the snow. My sunglasses are still broken, one lens taped over with a slit cut through the middle so I don’t go snowblind.

I cannot remember a world without wind. It is everywhere, it is everything. It is bread and salt; it is nourishment, it is punishment. How frail is the human body against the forces that nature can muster. Thank god for the human spirit. And thank god for duct tape, and the wisdom of the trail which has allowed me to MacGyver so much of my gear: my one-eyed sunglasses, the white cotton shoelace I use for a belt, the poly cord-and-beer-koozie leash I put together for my ice axe. 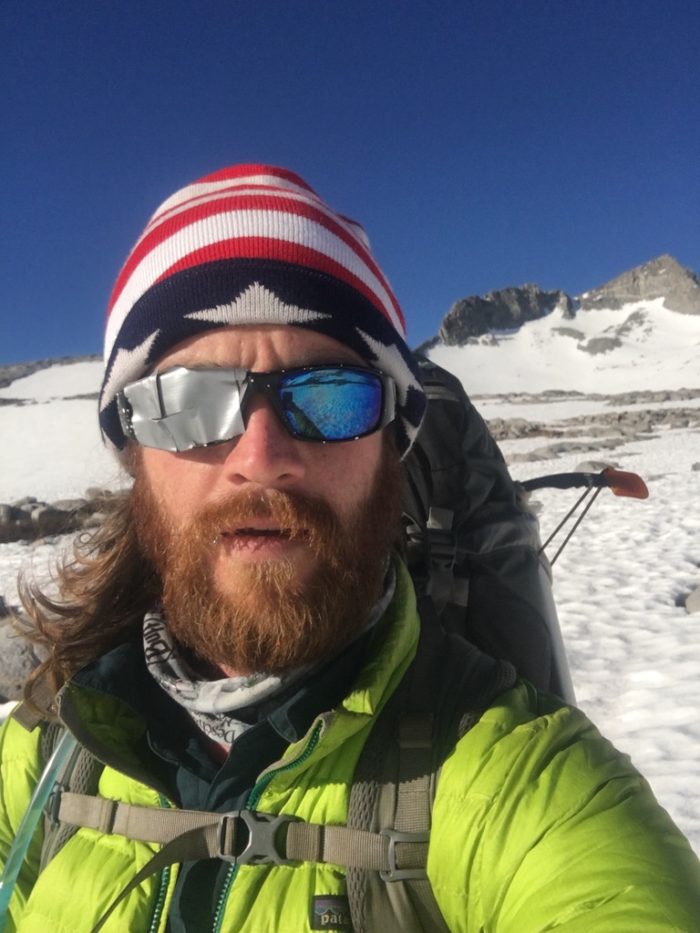 At the top of the pass—for fight our way there we always do, despite the snow and other obstacles the Sierras see fit to throw our way—Sweetcheeks and I take a snack break in a rock field that breaks up the snow. There is a small marker here indicating our elevation: 11,066 feet.

In silence we sit and try to locate ourselves within the vast and incomprehensible majesty laid out before us. It’s beginning to feel as though we belong in the mountains, which might’ve been here ruling this valley at the beginning of time. They will be here long after we’re gone, long after anyone is left to speak words in a language that anyone living now would comprehend. They will be here until they crumble to dust, and I take comfort in knowing there will be no one left to mourn them. It’s easy to feel small looking out on such mind-boggling heights, distances. But it’s easy to feel important too.

As we walk ourselves into crumbling and unstoppable shape we are becoming part of the land here. We drink from the creeks and streams and seeps the way we were always meant to and we take a little of the mountains into us each time. What we leave behind–footprints, catholes, the ripple effect of branches kicked or stones overturned—becomes part of the mountain in turn. So you see we are in this place, and it is in us, and if the moss of the forest were to overtake my legs I think I could spend a century or two looking out at the bones of the earth in this high and secret valley.

We hike down to where the snow begins to thin out. It’s tricky going; the trail itself isn’t clear and everyone picks their own way across the face of Donohue’s bowl of a summit. An hour of downhill plodding and one almost-spill into a mountain stream later and we’re in a lush green meadow with no sign of snow at all. A massive, lazy creek winds its way through the grass and along the trail. I’ve said before that hiking makes me feel like I’m back in church. That feeling goes from the spiritual to the literal as we follow the trail and find ourselves at the base of rock walls that rise like cathedral spires above the valley.

We’ve officially left the Ansel Adams Wilderness and entered the Yosemite Valley, and it shows. As we get closer and closer to Tuolumne Meadows, we begin to run into hordes of hikers heading the other direction. Southbound JMT hikers, mostly, but also so many day hikers in cotton. Cotton! If you see someone in cotton clothes on the PCT, you know you’re either close to civilization or about to participate in a rescue. They all look so clean and smell so good. I wonder how I must seem, with my one-man band looking backpack (smaller than theirs despite all its bells and whistles), my filthy face, my matted hair, my lunch of cold-soaked Spanish rice in a Ziploc bag. It makes me feel great, to be honest. I may still feel like a fraud when I stack myself up against other thru-hikers, but I can see how wild and serious I look to everyone else when we make eye contact. 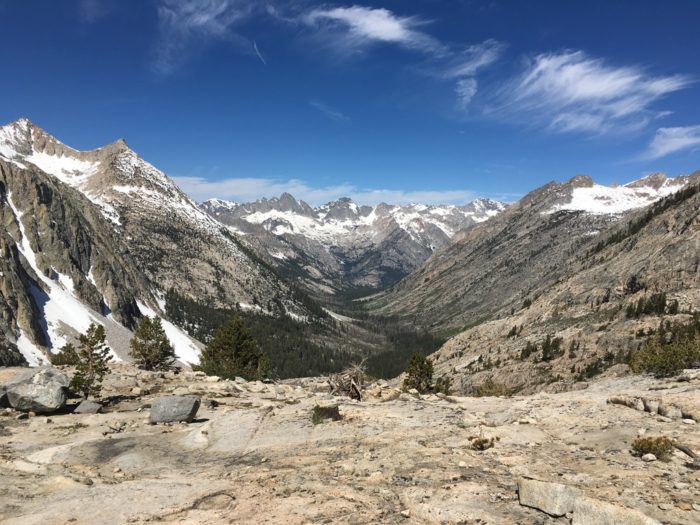 When we arrive at Tuolumne we make for the ranger station to pick up permits to hike down and camp in Yosemite the following night. It’s 22 miles down to the main hub of the park, a rare opportunity to, uhhh, hike a long way without getting any closer to Canada. But we’re all dying to see El Capitan and the rest of Yosemite, so it seems a small price to pay.

Paperwork in hand we head to the backpacker campground, which sits at the edge of the parking lot where the area’s General Store/Post Office combo does business. I’ve got three different packages waiting for me: my Uncle Joe and Aunt Denise have sent a whole bunch of food, Rake’s parents mailed a box of their own, and Rake himself sent along a comic book and some other treats. No one can do this alone. Least of all me. I start sorting; there’s no way I can carry all of this with me. I won’t even be able to give it all away—my friends are tearing into their own boxes.

At the backpacking campground we encounter a host of PCT hikers familiar and un-. We share stories and swap resupply food in front of a roaring fire. Steller’s jays, cacophonous and crafty birds with blue bodies and charcoal-black mohawks, make their presence felt, doing their best to make off with any food that isn’t being intimately attended to.

I’m happy to be among friends, and to have closed all the miles between Mammoth Lakes and Tuolumne Meadows. But I can’t pretend that everything is rosy. I’m beginning to get tired of all this: of chronicling each day’s adventures feeling more like an obligation than a choice, of the black moods that set in on me when there’s a long way to go each day, of the anxiety of inertia that makes every stop more worrisome than relaxing. I’m not in a great place vis-a-vis this whole endeavor right now, whatever peaceful feelings I had this morning atop the pass, and I hope I can find a way to lessen my angst soon.

The tradition of Irish Catholic stubbornness in which I was raised might be enough to carry me through regardless of how miserable I get, but that’s no way to have an adventure, much less live a life. The bulk of the Sierra is behind me; I can only pray that my legs get stronger and the miles get less treacherous. Otherwise I can’t see any way I’ll ever feel like I’m making progress, like I’m drawing any closer to finishing this damn thing. 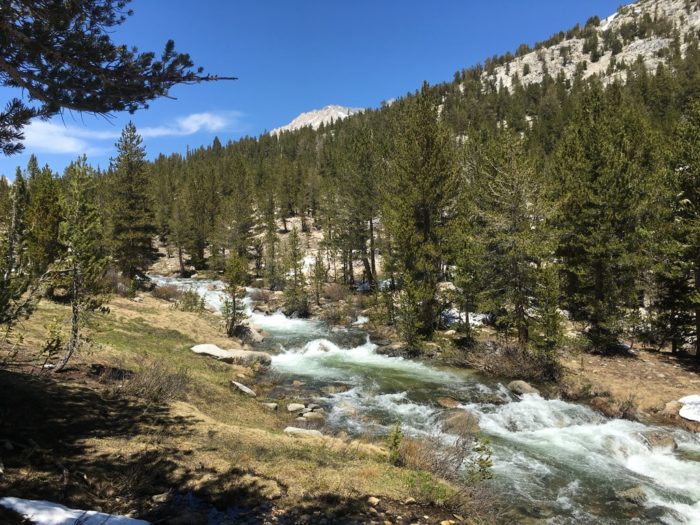 But although it was for entirely unrelated reasons, I think it’s fitting that I ended up with “Stoic” for a trail name, as I spend a lot of time contemplating death, trying to figure out how I feel about knowing that one day all of this will end and the me I know will be gone forever.

I suspect that this is not a particularly uncommon quirk. For as taboo as the subject is, for as much as we try to sweep away and sanitize the realities of being mortal, we are the only species both blessed and cursed with such a consciousness as to know that we must die. But since we don’t talk about it much as a culture, and because there are fewer and fewer people to talk to out here with each passing day, I talk to no one about it but myself.

Mostly I think about death because I find it affirming: I am alive, against all cosmic probability. I am breathing the clean air of the mountains and churning my legs up the span of this country. I am young and healthy and mostly joyful, far removed from the concerns of age. It is a privilege for death to be such an abstraction; I know this as well as I know anything.

Really, if I panic about death at all, it’s because of my gnawing feeling that no matter what I do I’m losing time. It’s a race that cannot be won, a steady tilt toward the abyss with no mechanism for stopping. And I’m out fucking around in the woods, miles and miles from anyone who loves me, miles from anyone who even knows my middle name or what I was like as a kid. I could be with them; I should be with them, if I’m being honest with myself.

But I suppose there are some things I just need to do for myself, and testing myself out here in the mountains and the fog and the grinding endlessness of the switchbacks is part of that. The other part is just the swelling in my heart that I get looking out across another valley, down another river, up another tree older than this country. I have written thousands of words and have still never put down how it truly makes me feel. I don’t think it can be done. I believe that’s living, too, as much as the other stuff.

Get Your Copy of A Good Place for Maniacs