A few days back, I got up at dawn and left my trail family behind at Warner Springs. Half of them had been out to the bar, and the other half were taking the day off. Only a few hikers were moving around.   Dylan, aka Painter, was taking multiple days to hopefully repair a torn-up calf muscle. 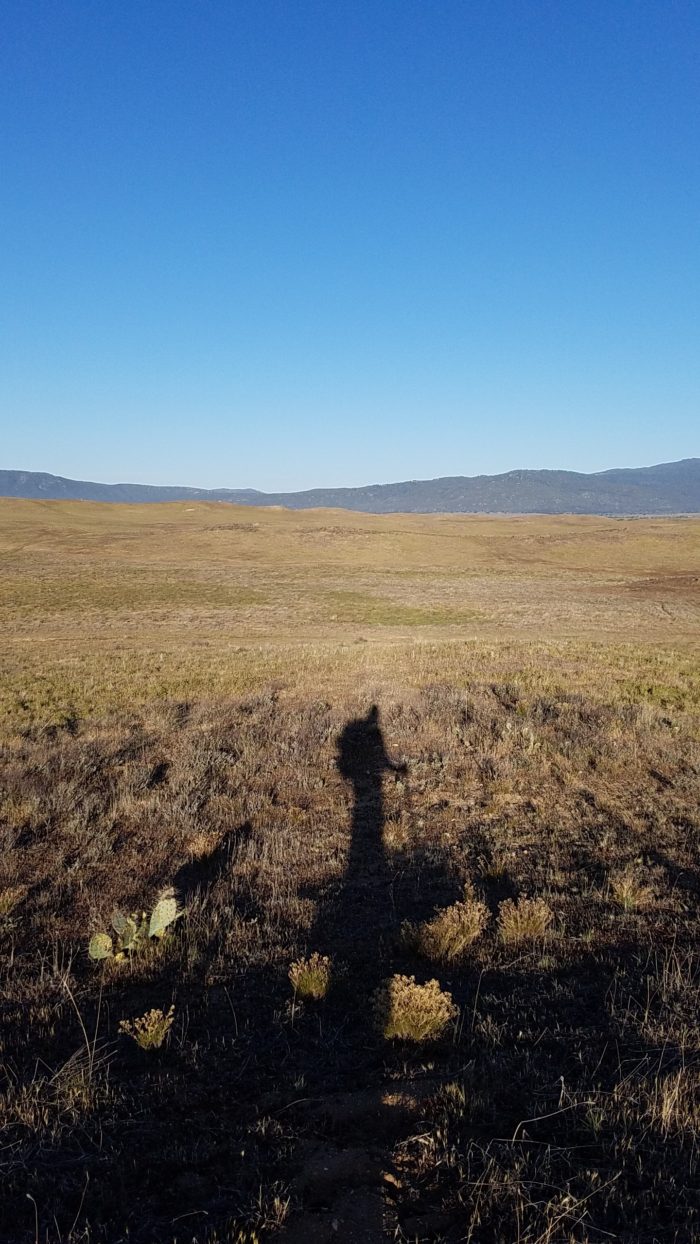 Hiking at dawn is great especially in the desert, because it’s cool and you see a lot more wildlife. Lots of birds and rabbits. The lizards and snakes and occasional insects do not come out until later.  By starting at dawn, I can go four or five miles without water.

At Agua Caliente Creek, I bumped into Jose, Kelly, and Gandalf the Blond. After getting some water I pushed past and did a long, hot, uphill grind to mile 120, where I took a one-hour nap for lunch.  That might be my new thing.

Just after that, trail magic! A woman named Topaz had hauled a cooler full of Gatorade, bananas, and oranges up a side trail. I hung out with her and her two dogs for a while, recharging. 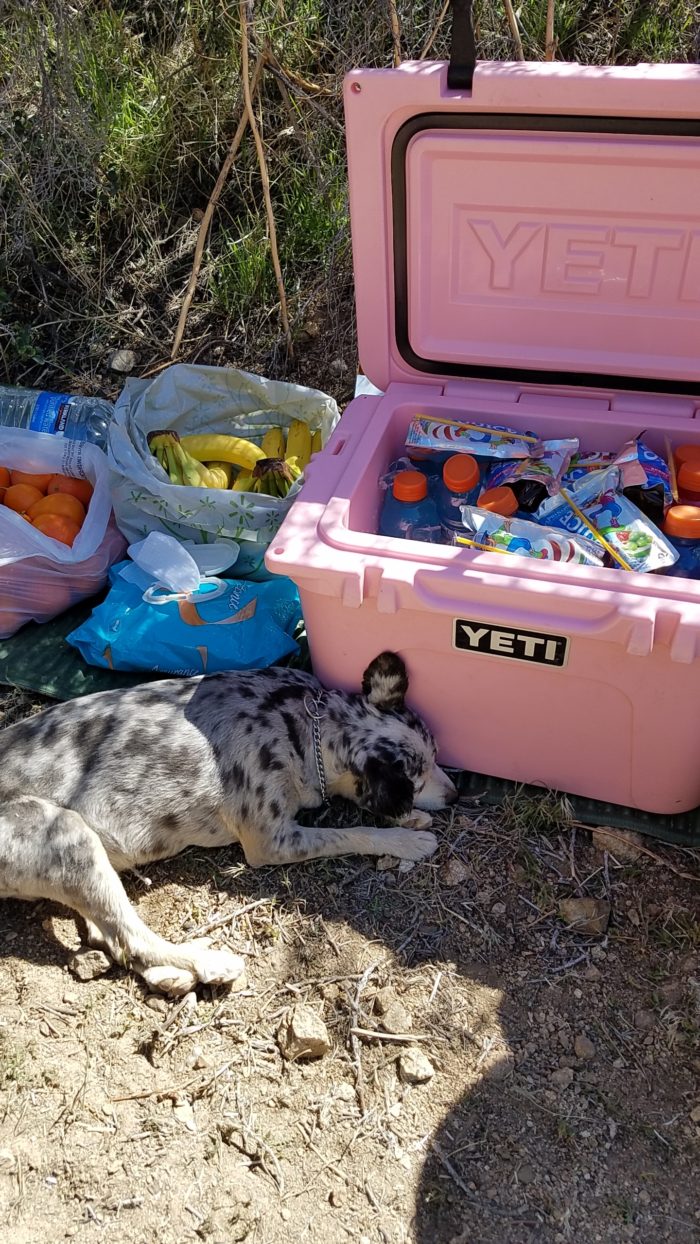 Heading onward, I did another seven miles and ended up at Mike’s place, a sort of cross between the encampment in the movie “The Road Warrior” and a real life version of Margaritaville. 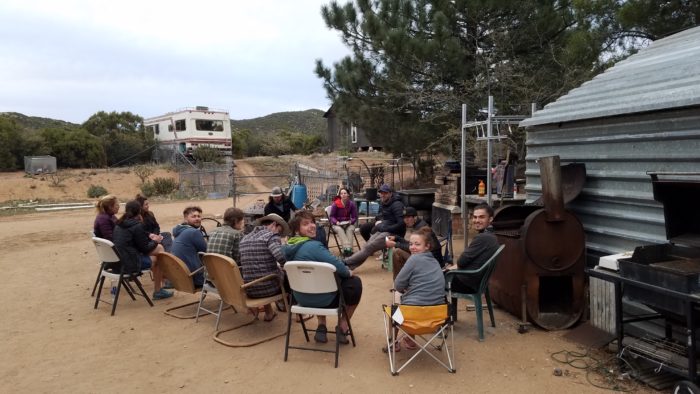 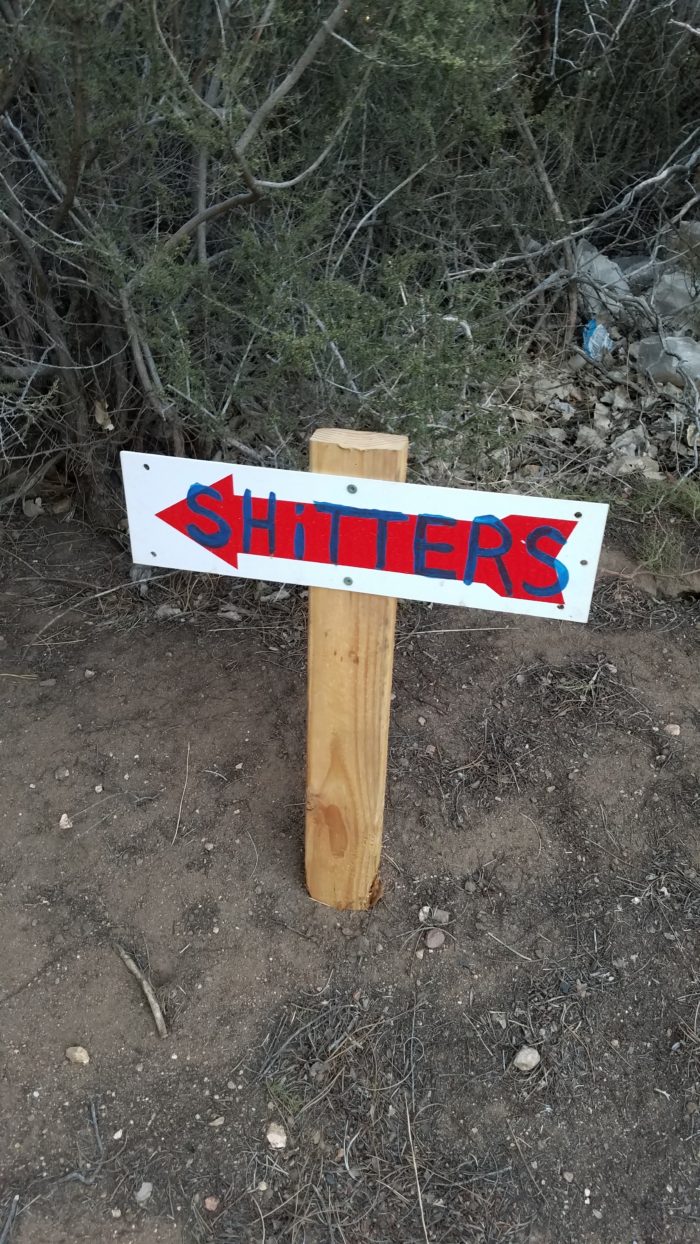 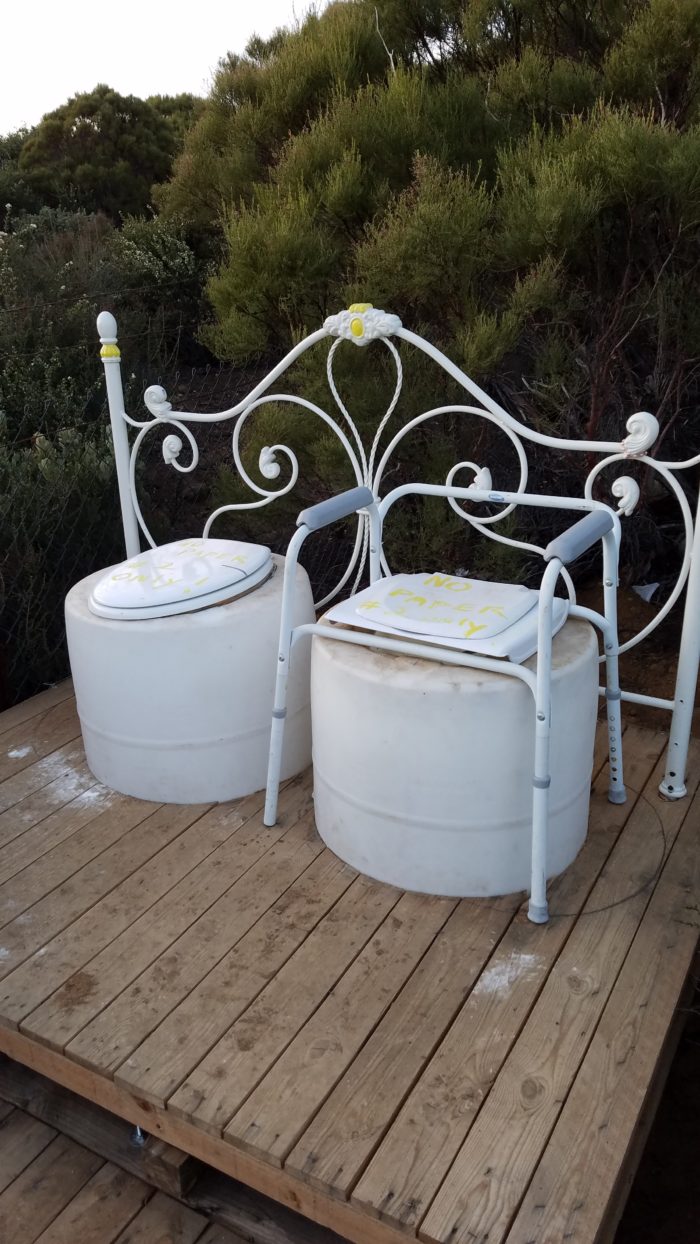 There are a few old desert rats who work there, making pizza,  cinnamon rolls, and coffee for the thru-hikers. It’s all donation-based but $20 is the standard. I ran into a lot of people there, many who who were taking zeros or just going slow.

Leaving late, at 7 a.m., I did some good hiking and ran into some more trail magic at mile 137. It’s probably better to call it a hiker feed, because the guy was there. Real trail magic is just a faceless, nameless cooler full of snacks in the middle of nowhere with no thanks expected or required. After a few minutes I got a strange vibe, so I left. Traveling over trails like Coyote Canyon Road, I ended up at the water cache at mile 143. Very much appreciated.

One mile later a flattish spot on the ridge provided camping for us. Michael of the giant pack, Mike, Darren, Snake Eyes, and Fugitive were there.  As the sun set, the coyotes started warming up, answered by the dogs in the valley down below. It felt like watching a bar fight between two reluctant drunks, neither of whom was terribly interested or willing to actually do any damage to the other.

Again getting up just before dawn, I did a quick mile to the Muir Woods cache at mile 145, where trail angel Mary provides camping, shade, a table, water, a toilet, and books. I did not get to meet her but she seems pretty cool.  Louis, Janet, and Tori were there, having done the extra mile the night before. 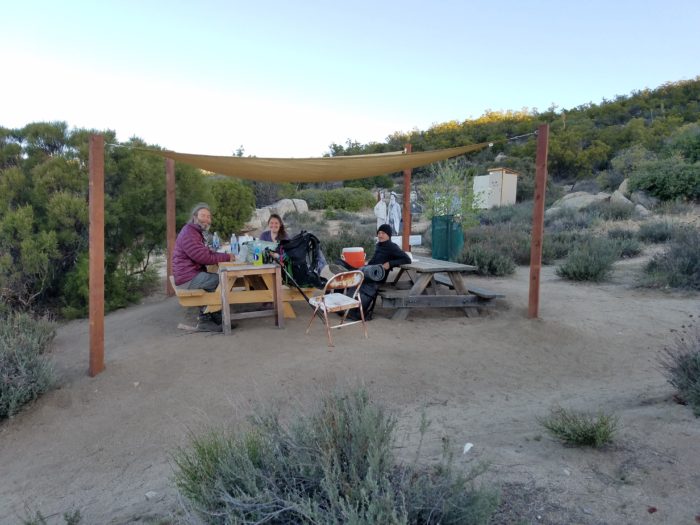 From there it was a quick six miles to the Paradise Cafe, where most people gorged themselves on breakfast beers, eggs, and various meats. I had a gigantic cinnamon roll, and was well pleased. After digesting a bit we pushed on, winding our way up onto a ridge at mile 158, where we all stopped to get water. From there it was just two miles to our campsite, under a bunch of scrub oak trees that blocked almost all of the wind. It was perfect. Another cowboy camp night. 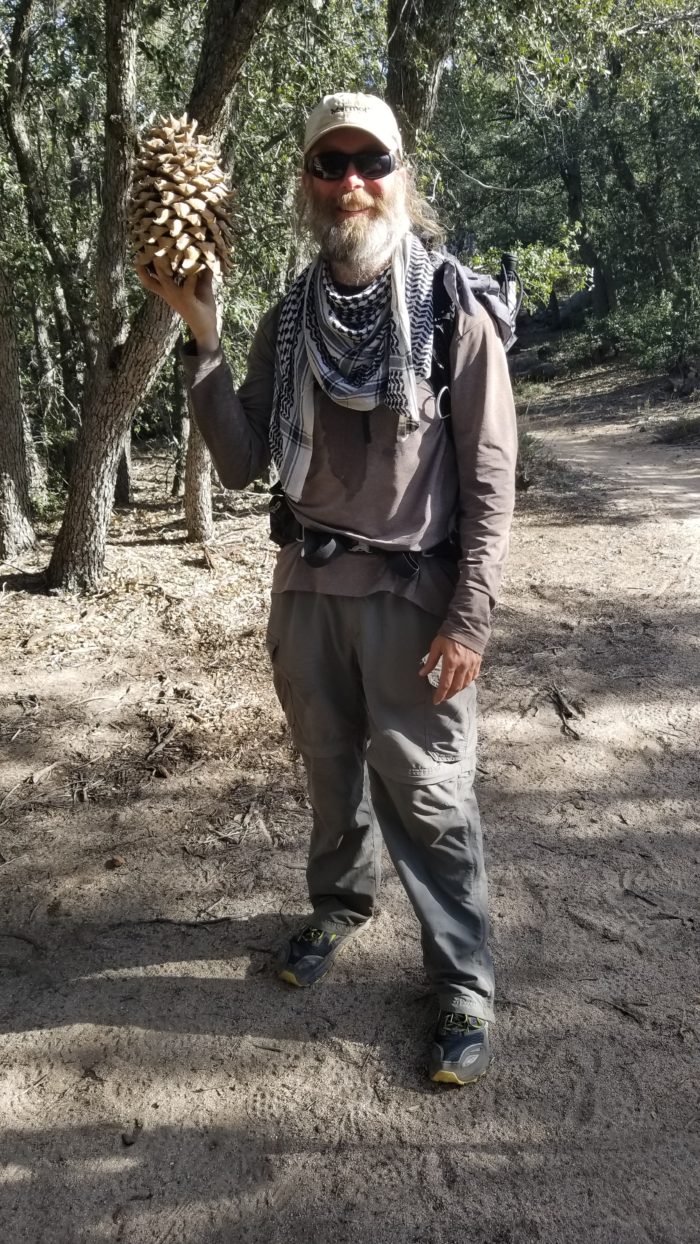 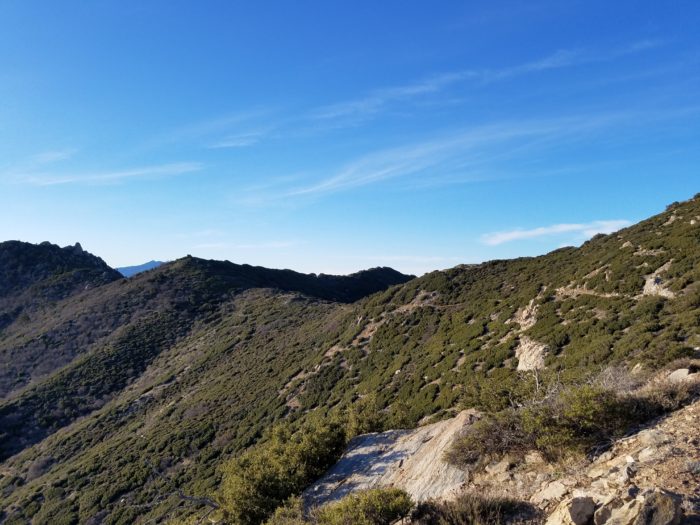 Again getting up before everyone else, I quickly got to the top of the ridge and was rewarded for the climb.

Views on both sides for probably 100 miles. The trail got steep and more rugged and the exposed areas reminded me a lot of New Hampshire or the Saddleback Ridge in Maine. 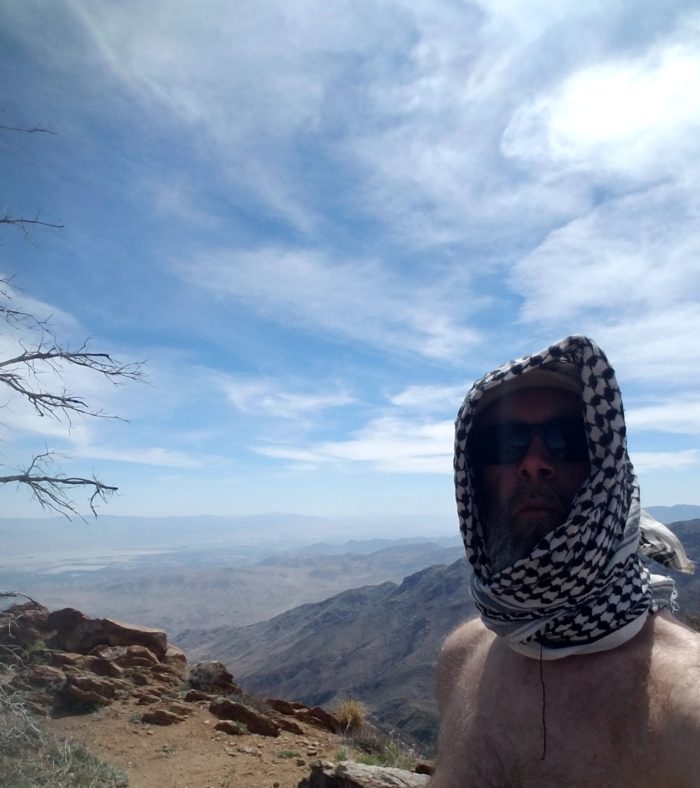 This year an additional two miles of trail have been opened, and in my quest to do new and different things this year, I decided to do the steep climb up the back of Spitler Peak. Totally worth it. Lots of people bailed at mile 166, heading down Fobes Ranch Road, and then hitching all the way to Idyllwild. The rest of us went to the new cutoff and walked down toward Hurkey Creek campground. 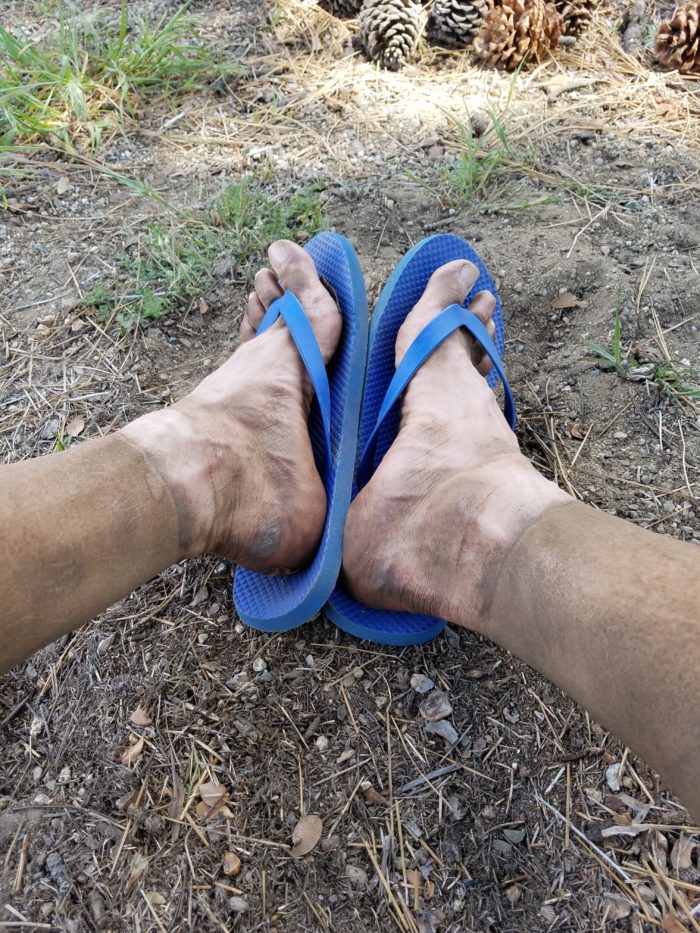 After a 4.6-mile stretch that was definitely longer than 4.6 miles, it turned into a paved road.  There, miraculously, a trail angel was there and hitched us the rest of the way. We rinsed, drank lots of water, and relaxed in the shade for the rest of the day. It was great to hang out with Mike; Grace, aka Oz aka BunBun; Krisann, aka Mother Hen; and Darren. Many topics were discussed, the highlight of which was the fact that when you cinch down your quilt foot box, it basically looks like a butthole. Darren pointed out that on cold nights, you need to cinch it down to a one-finger butthole. It was much funnier at the time.  Especially when BunBun suggested that you simply shove a sock into it instead.  Very mature. 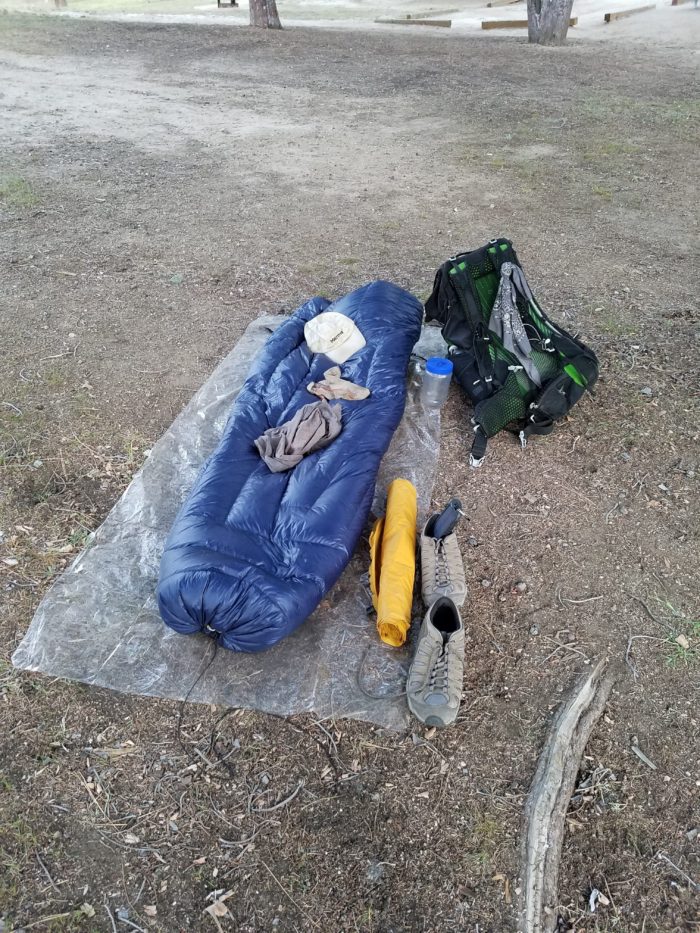 Cowboy camped again, and was surprised when it dropped below 35 this morning shortly before dawn.

Again up early, I took a leisurely stroll up the seven-mile reroute trail from the campground into the neighborhoods of Idyllwild. It was a great walk, with plenty of wildlife and neat scenery. It also passed by a small memorial to a mountain hiker who had died there unexpectedly.  There was a certain pagan mystique to it as other outdoor enthusiasts left things for him, like water bottles  and candy. 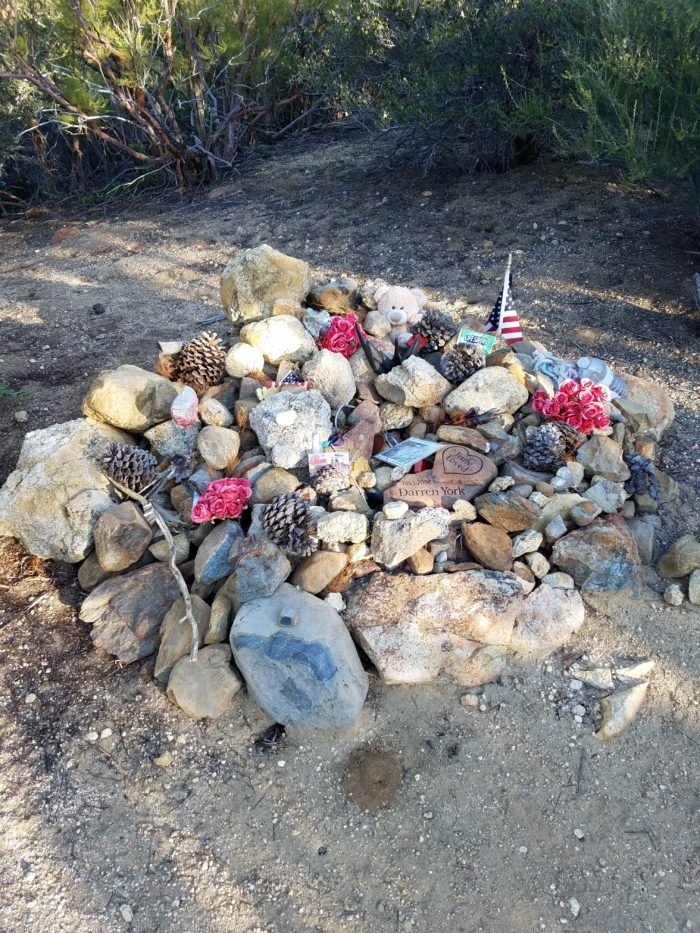 The trail goes through a section that had burned in 2013, and it was neat to see the parts that are growing back. Almost all of the big pine trees survived; I imagine that this is not their first fire. 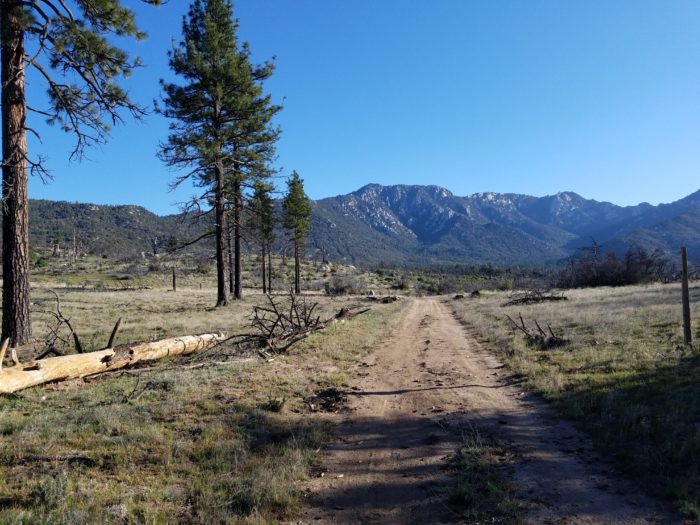 I got to paved roads in a nice neighborhood of Idyllwild, and although I was planning on walking all the way to the post office to get my mail, someone stopped, backed up, and then picked me up and hitched me in.

Despite foolishness at the Foster post office, the package that Shana sent me arrived safely. It was the same nice, helpful, friendly post office person as last year, and I told her she was just as nice and helpful as last year. I think I made her day.

I got here on fumes. My breakfast this morning was a packet of hot chocolate powder mixed with a few cups of cold water and then chugged. A muffin and smoothie were the order of the day here at The Higher Grounds Coffee House. People are rolling into Idyllwild, and there are lots of folks whom I have never met. Eva and Una got here with their trail family, and they’re all staying in a rented house. I am at the inn.

At the coffeehouse I ran into Heffner and MVP, who is still in contact with Sarah, the woman I met on day one.  She’s a few days back, and MVP sent her a picture of me.  Might be a mini Scout and Frodo reunion.

Showered properly for the first time in 12 days and then hit the town. Eating the macro food bowl at the Plant Food Supper Club. Life is good. 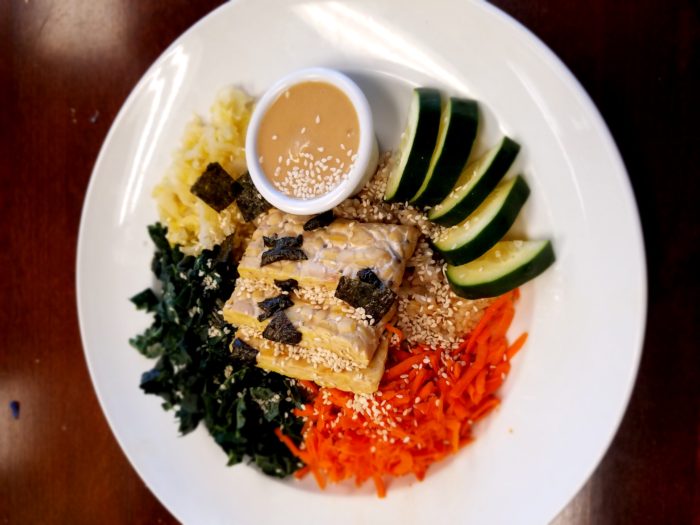 Tomorrow I think I will get up very early, and hike back to the trail at mile 177. From there I will try to push up and over Jacinto and camp at around mile 195.  I have gotten spoiled over the last few days with minimal water and dwindling food. Tomorrow is going to be a rude shock, with five days of food and probably a gallon or more of water.

There is a nascent plan to hit Jacinto for sunset. I’ll see what happens.  Then it’s on to Big Bear and possibly a new month.