Days Zero to Five on the PCT: Campo to Julian

Finally made it to day zero after two long weeks of waiting! We flew out to San Francisco on Wednesday night. I had spent way too much time on the internet reading about people’s backpacks getting lost by the airline so I was mega stressed when I didn’t see it at the baggage claim. Since I had wrapped my backpack in a plastic bag, they had put it with the oversize baggage. Whew!

We stayed at the Ocean Villa Inn in Ocean Beach (aka Dog Motel since it’s dog friendly) Wednesday and Thursday night, but actually didn’t spend much time in Ocean Beach. Thursday we spent most of the day in La Jolla and ventured to North Park at night for some beers at Modern Times and some barcade games at Coin Op. Friday was Scout and Frodo’s house. We definitely bought way too much food and our packs were wicked heavy. I didn’t bother weighing it with all the food and water because I didn’t want to know, LOL. I was sick of thinking/worrying about the trail and just wanted to get out there and do it!

After a photo shoot with the monument at the Southern Terminus it was time to hike! 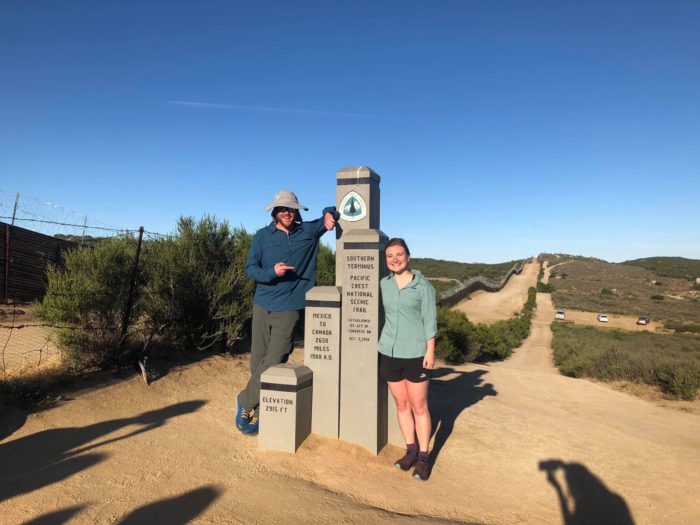 Frisky and me at the Southern Terminus.

After a few miles, I stopped to put on some sunscreen and my sun hat. Around mile five, I passed a rattlesnake but didn’t notice until afterward when it started rattling. Frisky taught me how to take my water bottles out of my pack while walking and it was a total game changer, I’m still excited about it! At mile 15.4, we arrived at Hauser Creek and took a break. We debated hiking on to Lake Morena (mile 20) but decided to save the uphill climb for the next morning when it would be cooler. 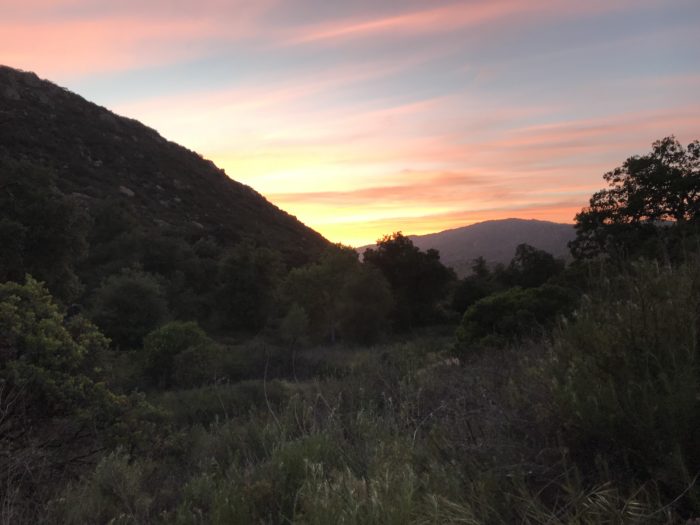 Started hiking at 6:45 in an effort to beat the sun during the climb out of Hauser Canyon. Got to Lake Morena around 10 a.m. and were gifted with some awesome trail magic. 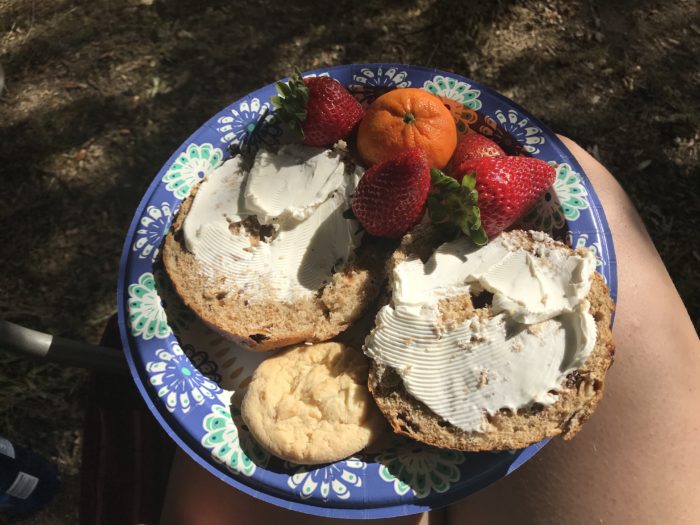 After kicking it for a few hours, we hiked on and stopped at the creek under the highway to filter some “troll water.” Stopped for another break at Boulder Oaks Campground and ate a ton of goldfish. Frisky and I packed out almost two ounds of goldfish so we needed to put in some work to lighten our packs. One of the comments on Guthook said the waterfall at Kitchen Creek was “a great place for kicking back with the bros” so we all took another break there before continuing on to Fred’s Canyon to camp for the night.

Started hiking at 6:30 a.m. and completed our first ten before ten (ten miles before 10 a.m.) to Mount Laguna. The weather was wet, windy, and cold so we took a quick five-hour break inside and got some much-needed food and coffee. Met up with Mark, Gables, Vons, Luke, Janet, and a lot of other PCT hikers. Most people decided to get a room in one of the cabins at Mount Laguna, but Frisky and I decided to hike out another six miles to camp. The wind/rain on the ridge was gnarly and reminded me of being in the White Mountains. We’re still undecided about whether hiking out was a good idea, but glad that it made the next day of hiking a littler shorter. 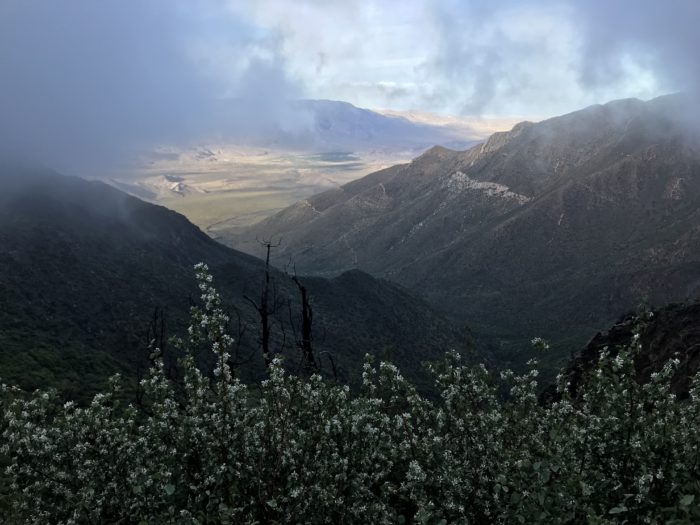 Back at it after a five-hour break in Lake Morena.

Since most people decided to stay overnight in the cabins, we slept in a little to try to dry our tent as much as possible. Around 8 a.m., we got up and put on our cold, wet clothes. At the water faucet at Penny Pines, we met up with a lot of hikers that had gotten up early and hiked from Mount Laguna. Still on the ridge, it was windy, cloudy, and cold! We stopped at a creek to filter five liters of water since it would be the last water until Scissors Crossing the next day. I’d been saving a new episode of Backpacker Radio to listen to for when I was “riding the struggle bus” and finally decided to listen to it since the bottoms of my feet were hurting and my motivation was low. Vons caught up to us on the ridge, and the clouds finally cleared for a beautiful view. 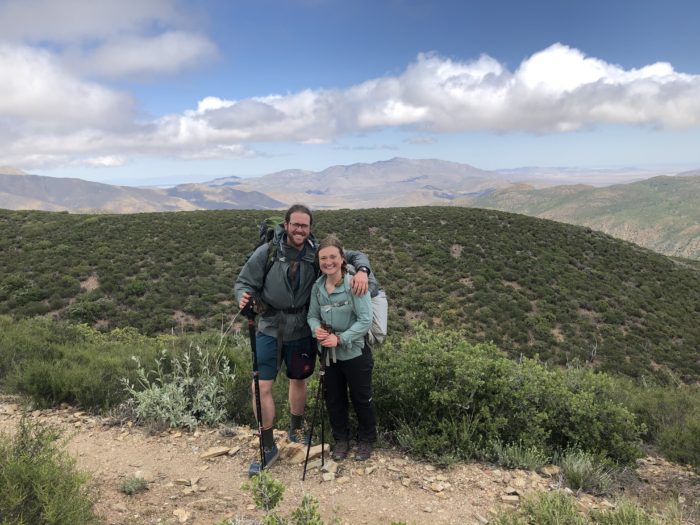 After 36 hours in the clouds we were rewarded with this beautiful view ,

We began the steep descent down to our camp spot for the night and met Woodpile, a hilarious guy who hiked the AT in 2017.

It finally felt like the desert on the hike into Julian. 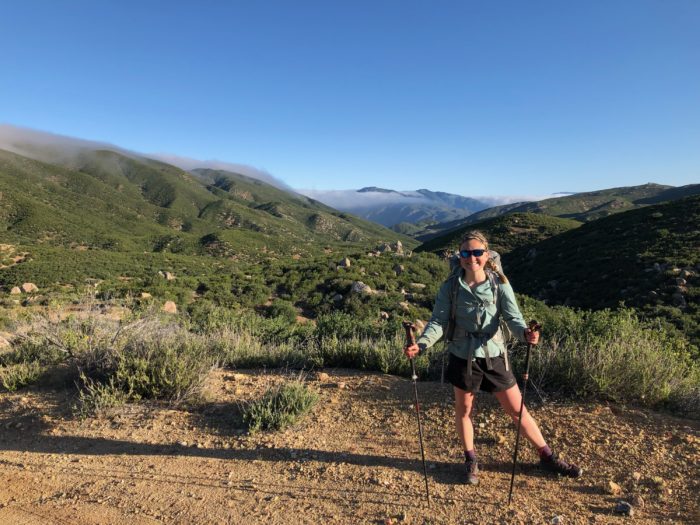 Finally felt like the desert on the hike into Julian.

The last five miles felt like forever, but we met up with Kate and came up with some funny would-you-rather questions to pass the time. Example: Would you rather hike the PCT in shoes that are one size too small or in a Tyvek suit? Close to Scissors Crossing, we saw a silver van stop but it seemed too good to be true. It turned out to be trail angel Ghost, who offered us a ride to Julian. After waiting a few minutes for Luke and Janet we made our way into Julian for some free pie, ice cream, and coffee at Mom’s. 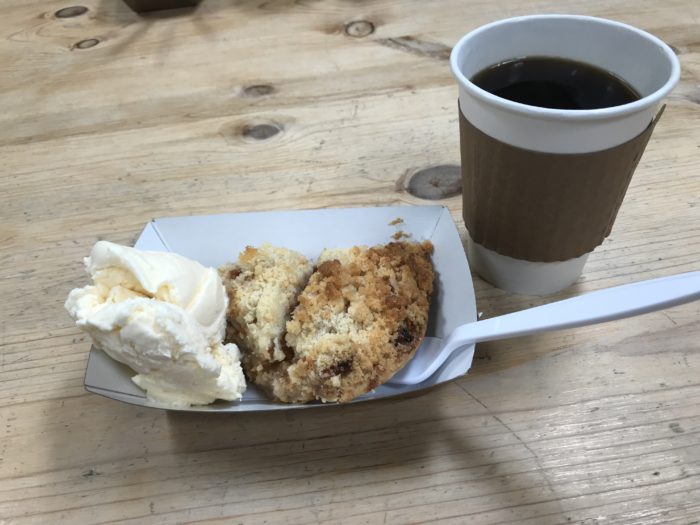 Made it to Julian for some pie, ice cream, and coffee at Mom’s.

Frisky and I were planning on getting back on trail, but decided to stay in town for a much-needed shower, laundry, and a bed. I washed my clothes and was amazed by how much dirt was in my socks! After resupplying, we enjoyed some pizza and beer at the Julian Beer Co.