Fires and Tendons and Bears

A journey of 1000 miles will probably seem longer if it begins with plantar fasciitis. A few months before starting the PCT, I woke up one morning, took a few steps, and felt a twinge in my left foot. The pain in my heel worsened over the next few days, and like previous sports injuries, my initial reaction was denial. I’d recently received my first COVID shot, and I was tempted to double-check the list of side-effects, just in case. I continued with my running schedule because the pain became bearable after a mile or so. More than anything, I wanted not to interrupt the preparation for my hike.

A month later, and with no improvement, I tried an arch-support and then insoles. I still refused to stop running and do a low-impact activity instead, which wasted another month. Finally, bargaining gave way to acceptance. With just six weeks until the start-date on my permit, I replaced running with cycling. The pain lessened almost immediately, but then progress stalled after about a week. Walking remained uncomfortable, especially first thing in the morning. Having to start the PCT with a nagging sports injury did nothing for my pre-trail nerves.

The week before I was supposed to travel to the northern terminus, three wildfires broke out near the town of Mazama. Although the PCT remained open, Hwy 20 was immediately closed. It seemed like a bad idea to get involved in what was obviously a messy situation, and I hastily changed my plans. I decided to start my hike at Stehekin, and booked a ticket on the ferry across Lake Chelan. A few days later, I picked up my rental car and waited for the evening traffic to subside before leaving Idaho. From the I-84, the setting sun wasn’t much more than a dim orange disk as it hovered in the smoky skies above Oregon’s Elkhorn Mountains. I wondered what visibility would be like on the PCT.

The next day, I dropped the car off at the airport in Wenatchee and tried to get an Uber into town. Unhelpfully, the app said there were “no cars available” and offered no further details. I decided to walk: it’s only 5 miles, and I figured I could use the practice. I stopped off at a convenience store along the way and lightened my load by spending all of my loose change. When some of the homeless people under the Stevens Street bridge asked if I could spare any change, I could only apologize. I also felt a little relieved that my homelessness was only temporary.

No trail yet, but still magic

The bus from Wenatchee to Chelan was free, but the campsite at Lakeshore RV Park cost $47. The camp host was very helpful, and she went out of her way to get me the last available site. I couldn’t thank her enough, because the cheapest hotel room I could find online was almost $400. After pitching my tent on the rock-hard tent-pad, I plugged my phone into the adjacent power outlet. I had to try and get my money’s worth somehow. While I was scrolling through the list of nearby restaurants, a camper from a neighboring site asked me if I was hiking the PCT. I told her that I’d be starting the next day, and she invited me to join her family and friends for dinner: steak, sweetcorn and pasta salad.

My thanks to Cameron & Stacy, Brandon & Christina. My definition of trail magic is basically “anything that I’m grateful for.” Their generosity definitely qualified, even if I felt like a bit of a fraud for not yet having put a foot on trail.

And so it begins

The next morning, I walked to the “Lady of the Lake” terminal in plenty of time to catch the 8:30AM ferry. We arrived at Stehekin shortly after 11AM, and some of the passengers helped unload the luggage. My backpack was one of the last items off the ferry, and by now the day was starting to get hot. (At this point in the summer, I’d lost count of the Pacific Northwest’s successive heatwaves.) The next bus to High Bridge wasn’t for another two hours, so I decided to test my walking skills once again. I ate lunch as I walked, and wasn’t very hungry by the time I arrived at Stehekin Pastry Company. I certainly couldn’t manage one of their giant cinnamon rolls, so having bought one, it went straight in my backpack.

About a mile after the bakery, I took a right turn onto a steep, south-facing, partially-burned slope. The trail would eventually lead to McAlester Pass, but I really should have checked the elevation profile beforehand. The climb was relentless, as were the mosquitoes. Fortunately, the trail crosses Rainbow Creek several times, so having enough water to drink and cool-off wasn’t a concern. When I finally reached the top, it was late in the day and I felt like I’d just hiked out of the Grand Canyon. I sincerely hoped that subsequent days would be easier. (I’ve included a table below which shows how McAlester Pass compares to other significant climbs on the PCT.) With little time in camp before dark, I quickly cooked and ate dinner. Then I ate a cinnamon roll that probably weighed at least a pound.

At last, the PCT

My alarm went off at 5:15AM the next morning – about ten minutes before sunrise. Getting up at this time every day would provide enough light for photographs by the time I started hiking an hour later. I agree with all the points Ibex made in her recent article, even if my chosen start-time wasn’t quite as early. Her first point about “beat the heat” also means carrying less water and being pestered by fewer mosquitoes while breaking camp. The mosquitoes at McAlester Lake did not need my help making their life easier. They’d already started feasting by the time I headed downhill.

At the junction with the PCT, I stashed my bear canister and headed north. Bear canister? North? I’ll explain.

Slower than the average bear

I collected my bear canister as I passed the trail junction on the way back. I’d already met a NOBO thru-hiker, and North Cascades National Park was proving to be popular with day- and section-hikers too. In other words, I was expecting to see people using the trail. I was not expecting to walk around a rocky outcrop and encounter a healthy-sized black bear. I’m not sure which of us was more surprised. For a moment, we both just stood there, less than 20 yards apart. It was quickly apparent that this was a habituated bear, heading north, and it didn’t want to leave the trail. I was eager to continue south, and I too felt fully entitled to use the trail.

About a mile back, I’d found a Nalgene bottle that someone had presumably dropped. I still carried it in my hand, and I banged my trekking pole against it. I knew I had to say something to the bear. Anything.

I chose the volume carefully: loud enough to sound confident, but not so loud that it might come across as aggressive. The bear seemed pretty relaxed, and I wanted to keep it that way.

The bear made a slight move to its right, then its gaze moved back in my direction. It seemed to look through me rather than at me. It shifted its weight back slightly so that its front paws lifted a few inches off the ground. I thought it was going to stand up and get a better look, but it changed its mind and put its paws back down. Its reluctance to move out of my way was coming across loud and clear. I tried hitting the Nalgene bottle again, and driving my point home with a few more words.

“Seriously. C’mon. I haven’t got all day.” (Or something to that effect.)

That did the trick. The bear shuffled slowly to its right until it was about five yards from the trail. Then it made a slight left turn and continued ambling in my direction, parallel to the trail. It picked its way through the brush with its head down, and in no particular hurry. I realized that I needed to reciprocate. Walking forward slowly, I narrated my progress out loud. I wanted to make sure that the bear had no reason to look up to see where I was.

At its closest, the bear was about 15 feet away. Once we passed each other and continued moving in opposite directions, I stopped my commentary. Only then did I remember that I had a camera, but the moment for taking pictures had come and gone. The bear had picked up some sort of interesting scent and started to forage deeper in the bushes. The dark fur on its shoulders was still visible, along with a slightly lighter patch of brown along its spine. I continued my journey south, pondering how the situation might have unfolded if I’d been carrying bear spray.

The PCT’s ups and downs

Before I finish, here’s the table I mentioned earlier. It shows the PCT’s top ten biggest, longest, and steepest ascents from a northbound perspective. (In terms of elevation gained, distance travelled, and the ratio of those two values.) Descents too. The data were extracted from Halfmile’s GPS files.

Compiling the table required one big assumption. Imagine you’re hiking uphill and you come to a level (or slightly downhill) section of trail. Eventually, the trail starts to climb again. How long does the middle section have to be before you consider the second climb to be separate from the first? There may be an official definition out there somewhere, but I haven’t found it. Instead, based on the PCT data, I decided to use a value of one mile. If two climbs are separated by more than a mile, they’re separate climbs.

So now I have the answer to my question about McAlester Pass. How would the climb on day one compare to subsequent climbs? It’s in the top three for elevation gain, and just outside the top ten for distance and slope. I’m curious to find out what the future climbs have in store. 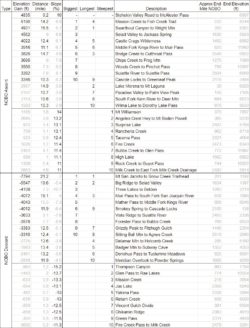 Useless fact: I named my left quad "brute-force" and my right quad "ignorance". Alternative fact: originally from the UK, I've lived in the USA for over twenty years. I've spent most of my trail-time in the western states of the US, but also hiked in Scotland, Canada and New Zealand. I planned on being in the PCT class of 2020, but then last year didn't go according to plan. With any luck, I'll be heading SOBO on the PCT in July 2021. --Richard-- somehikes.com