The Flip: Avoiding Fire and Ice

The Bad Pennies (Smash, Sweettooth, PB, and me, so named for our habit of turning up a second time) were flying. Oregon was almost over and the smoke was getting thicker every day. We were pushing to Callahan’s Lodge for the epic breakfast when trail magic struck out of nowhere. A cardboard sign was lying innocently on the side of the trail and it said, “Showers, beer, and good conversation. Call this number.” We clustered close around the sign, each checking to see if we had cell signal.

“Guys, when did we last shower? Please don’t tell me it was in Cascade Locks.”

“I think we found some about two weeks ago?”

We all looked down at our legs. They were black with dirt. Our gaiters cut clear, clean lines along our ankles, but everything else was filthy. I touched my hair; it felt shellacked. We called the number.

An angel named Tim picked up. He told us he was headed out to Ashland for a play, but that we were welcome to stay in his house (which had enormous windows overlooking the mountains of southern Oregon), shower, and play with his three dogs. We arrived, worried the dogs were going to be alarmed at four strangers invading their home, but they were excited. They greeted us, jumping in joy, cute puppies trying to lick the grime off our faces. Oh, sweet pups, only a pressure washer and hard-core soap could do that. Once they calmed down, we started in on the shower rotation and found the pet rattlesnake in the living room and rifle outside the bathroom. What a strange place, but sweet laws of mercy that shower felt good.

The next day, after speaking to Tim for the 20 minutes he was home, we struck out for Callahan’s Lodge and made it in time for the epic breakfast. They were so nice (the people, not the food, which didn’t have any noticeable personality traits). Probably because we didn’t smell awful.

They made the best gluten-free pancakes I’ve ever had in my life (sorry, Dad, even though yours were dinosaur shapes). The staff was very careful about making sure they were gluten-free and gave me a stack of pancakes so tall, it was like eating the Leaning Tower of Pisa. We devoured the pile of food and sat down to figure out what the heckin’ heck we were going to do about the Sierra Nevada.

Snow was coming, and at the rate we were hiking, there was no way we would be through the high passes before the winter storms hit. Plus, all of the resupply points were closing and Northern California was on fire. Dunsmuir was on the verge of being evacuated, I-5 was melting, and the smoke was so thick you couldn’t see the mountains anymore. We decided we needed to flip down to the southern end of the High Sierra and hike north from there. Once we reached Ashland again, we would take a bus back down south and hike the desert in the winter. The waiter brought us a stack of paper and pens so we could figure out the length of each leg and a realistic idea of how much our mileage would drop. But first, we needed travel outfits.

You know what one of the most wonderful things about being hiker trash is? Being comfortable with looking ridiculous. We made it into the city of Ashland and went straight for the Goodwill. Do you know what we found? Glory. Pure glory (Surefoot didn’t arrive in time to shop with us). 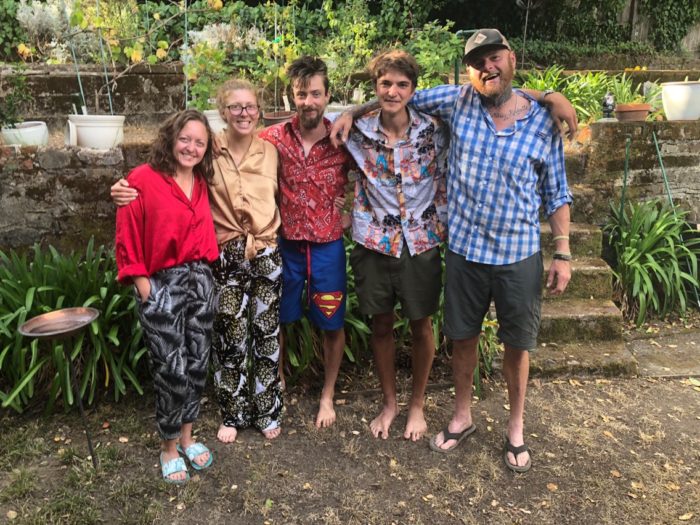 With our fancy new attire figured out, it was time to find the hostel, but we hit a few snags. They had been ignoring our calls for the past week, and when we finally reached the building to check in with the owner, we were locked out and ignored. Weird. Well, that’s what Airbnb is for.

We found a room that was affordable and, as it turned out, we didn’t even look out of place. The Shakespeare Festival was under full swing, so the luminescent satin shirts fit right in and there was gluten-free everything! I ate multiple cakes. The food baby was so impressive that I thanked the elastic waistband for all of the hard work it was doing.

The next day we strolled into the car rental business (in the same outfits) to rent a car that five smelly hikers could cram into and headed south. I-5 was closed, so we took the scenic route and stopped to visit the redwoods. The trees were so huge you could easily build a tiny house inside each of them. It looked like a fire had hollowed some of them out, making the forest smell even sweeter. The fissures in the bark were deep enough to use as handholds, making it easy to climb as long as you were gentle.

We stopped for a night in San Francisco to visit my mother’s boyfriend and recover after eight hours of driving. Now, as it so happened, it was Steve’s birthday and he didn’t have a cake. Well. That’s not OK. 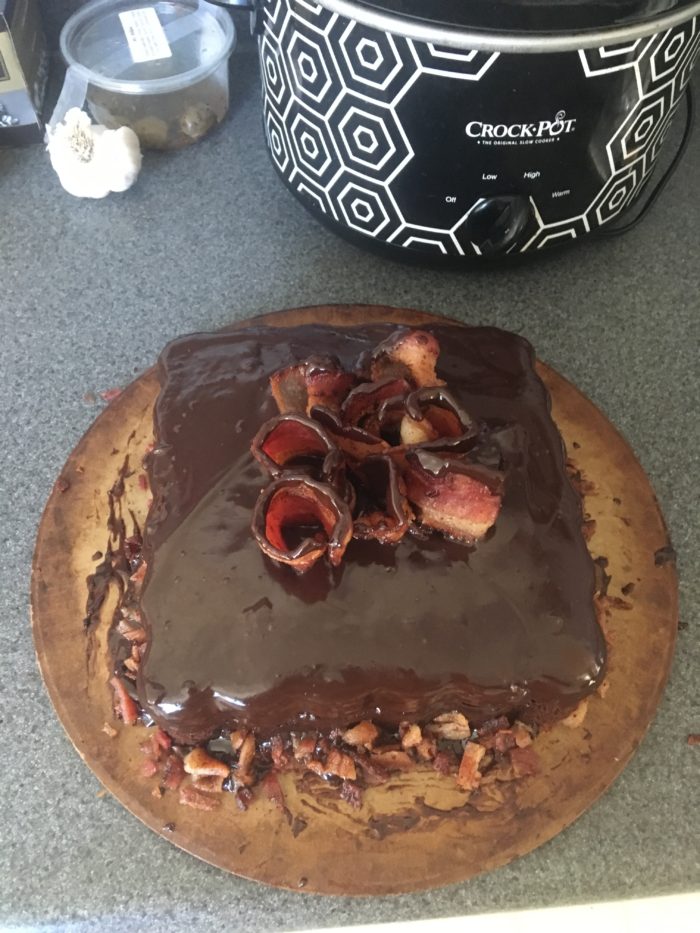 Let me say for the record that I cannot cook to save my life. I can use an oven pretty well, but if there’s a stove involved, something is going to burn and that thing will probably expand to the kitchen itself. But, I can make a mean chocolate bacon cake, and that pretty much summarizes all of the food groups a hiker needs (protein, sugar, and fat). We gorged ourselves and then all piled back in the car to head to Ridgecrest. 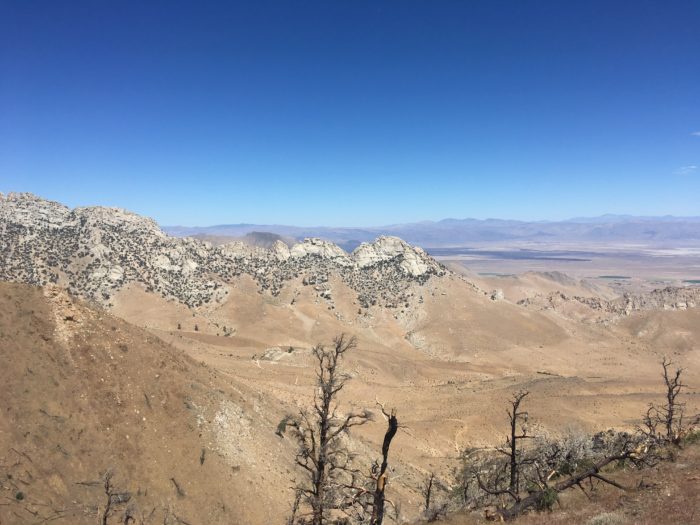 After another eight hours, we made it, with only one passenger needing to pull over to vomit. That’s pretty good, statistically. We rushed over to the rental return area and just barely got the car in the lot in time. We power walked to Walmart to resupply and hop on the bus that would take us back to the trail. Donning our hiking gear, we said farewell to the outfits that had served us so well. Then the bus arrived.

The bus whisked us back to the trail as the sun set and the kind driver yelled questions at us over the heavy metal music that was blasting through the speakers, finally dropping us off at the campsite. We set up camp and fell asleep to a sky full of stars and coyotes howling in the distance.