First thing I do is get my food situated and then go to the Ranger Cabin. I wanted to know if there was a hiker box because I had so much extra food. She seemed real confused and then told me this was the first night up here and never been around PCT hikers before. That through me for a loop and I explained about thru hikers, hiker boxes and Hart’s Pass being a huge spot on the trail. We talked for quite awhile and then I put all this extra food into the bear box. 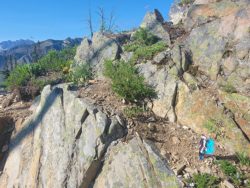 I figured I stop for an hour and just chill. The bugs are out so set up the tent, took my boots and socks off and took a nap. Starting again my foot felt good so continued on until Glacier Pass where it started to hurt again. I found a spot near Brush Creek and took another hour long break. I’m worried at this point but continued on. Spent the night just shy of Methow Pass.

Due to my foot pain yesterday I loosened up all the laces on my left shoe to see if maybe it was just to tight. It did feel better initially. By late morning, crossing by Tatie Peak it started to hurt again. This started to worry me abit, but Rainy Pass isn’t too far away.

Today ended up amazing. Maybe the extra long rests worked but there was no foot problems today. Yesterday I was really thinking about hitching into Mazama at Rainy Pass. This day will be hiking over a few passes. Which will also give me some amazing views. Methow Pass was immediate and then a long trail around the side of Tower Mountain toward Granite Pass. 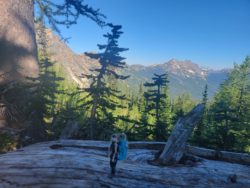 I ended up passing another SOBO hiker named Jeff. Granite Pass ended up being a struggle, it was very steep and seemed to take forever. I even took another trail that went even higher, but when I got up higher I noticed another trail on the otherside of a snowdrift. It just so happened a hiker coming from that trail showed up and I made my way down.

Shortly after section hikers passing by informed me to be wary of the next Pass, since there was still snow along steep parts of the mountain. Going up to Cutthroat Pass there were a half a dozen snowdrifts. Two of them looked sketchy to me, meaning I was not comfortable walking across it. Luckily, I was able to cross above one and under another along the rock talus it was sitting on. Still a bit of a butt clencher for me but better than the snow. 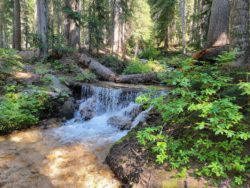 On the otherside of Cutthroat Pass was a nice easy climb down to Rainy Pass. This is a popular spot for day hikers, which I met many along the way. It was a noce sunny day and people really did seem to be enjoying themselves. At Rainy Pass, I felt great and continued on to North Cascades National Park. Ran into a couple streams with logs to cross over. There are two campsites available for PCT hikers with a PCTA Permit within the National Park, Six Mile and High Bridge. I ended up staying at Six Mile and ran into my first NOBO named Jackass.

While I have been pushing 17-19 mile days. Today will be a simple 11 as I work to my first resupply at Stehekin, WA. Leaving Six Mile Campground I run into a couple more NOBOs. One guy was Gasket and his plan was to run all the way to the border today! The last two days have been quite warm, enough that when I looked at my thermometer I’m tapping it, wondering if it was working or not. I was sweating so much, I thought maybe my water bottle had a leak due to the amout of water dripping onto my legs. 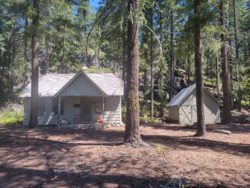 When I arrive at the High Bridge Historical Cabin, I waited on the bench for the next bus to come up from Stehekin. It’s an 11 mile walk down the road but a bus service comes by 2 times a day, 3 times if there is a reservation in place.

As I wait, two NOBO hikers arrive and we start conversing, Jupiter and Punisher. As we talk a short school bus approaches and parks nearby. We are thinking it’s the bus but learn it isn’t, just a family sightseeing. But lucky for us they offer to take us down, after they look around abit. The ride in was stories of the area and we provided stories of the trail. We are dropped off at the General Store and go in to purchase lunch, which ended up being 2 rib sandwiches and 3 root beers for me. Just missed the restaurant by 30 minutes.

Sitting on the patio until dinner which was a few hours and more hikers show up. NOBO hikers Falcon, Raspberry, and Zebidiah. SOBOs were the three I met at the border, Chris, George, Geoff. As well as the guy I pasted up coming down to Rainey Pass, Jeff and a new hiker, Phin. It was a great day ending with everyone moving to the boat ramp where some went swimming and the rest of us just sat in the water talking about the trail. There was a campground behind the Ranger Station where we stayed, PCT hikers were allowed one night free. Ended up being a great relaxing day.