If the sole reason you’re reading this is because the word “buffalo” caught your attention, I respect that. Because I don’t want to be too misleading though, I should probably break it to you that this post isn’t actually about the American bison.

I didn’t have any bison encounters on trail, but as I was writing this, I wondered – could bison have once roamed along the PCT corridor? After consulting Google, I learned that they were once widespread across the U.S., except for areas along the coasts, deserts of Southern California, Nevada, Arizona, New Mexico, and northern New England (fact check me here). I think that’s a resounding YES! 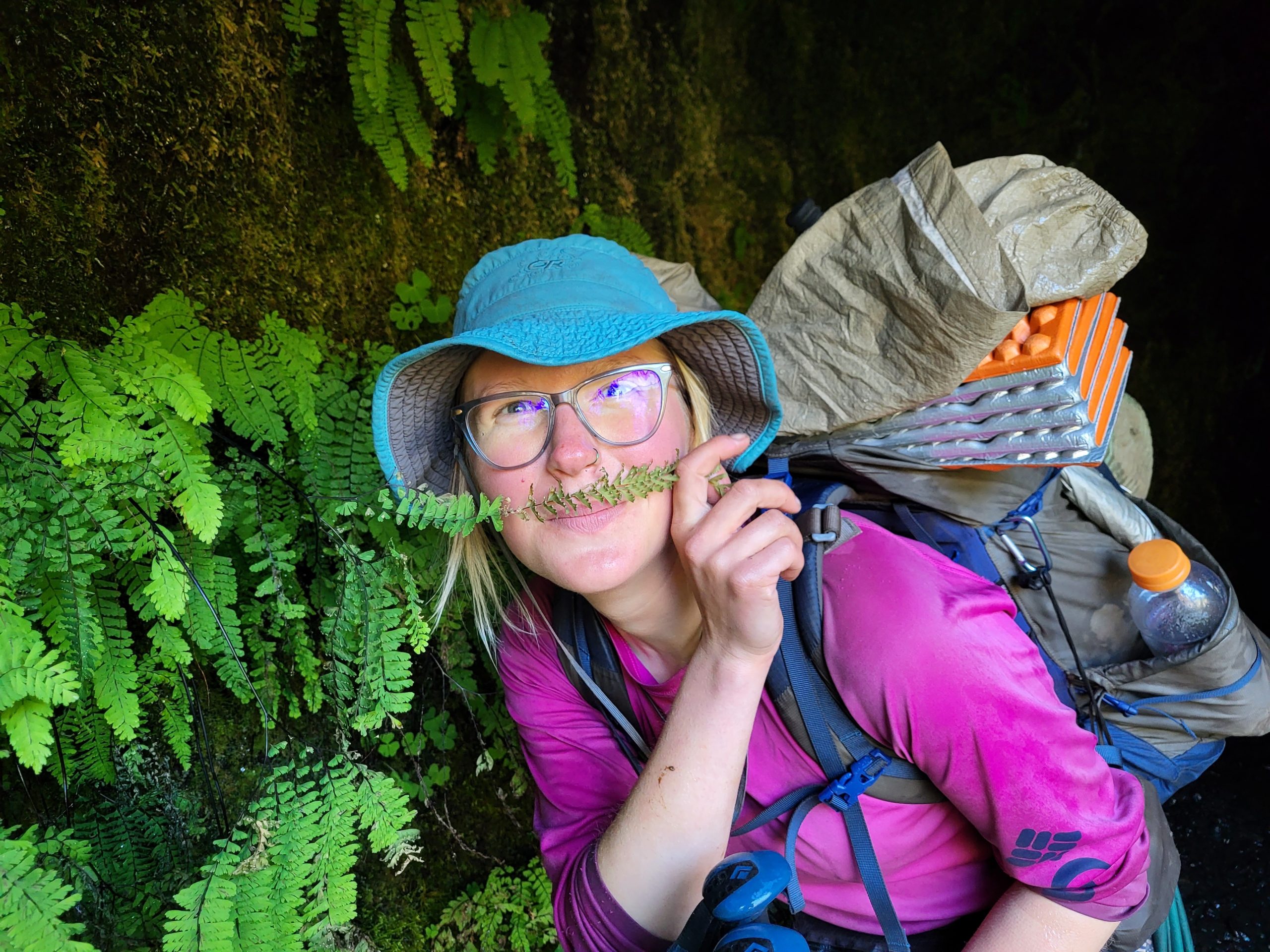 I promise this is all somehow relevant, just like this picture of me with the fern mustache…

Similar to “Rose, Bud, Thorn,” “High, Low, Buffalo” (HLB) is a type of reflective prompt I used as an outdoor educator to encourage more engagement from my students. It’s pretty straightforward – you share a “high” and “low” from your experience, with “buffalo” being something random.

Earlier on trail my friend Kai, an incredible human who is well-versed in the ways of outdoor & environmental ed., asked me over the phone what my HLB had been for the first few hundred miles of trail. Later on, I decided HLB would make for a fun occasional dinnertime activity at camp and much to my delight, my tramily members dutifully played along. 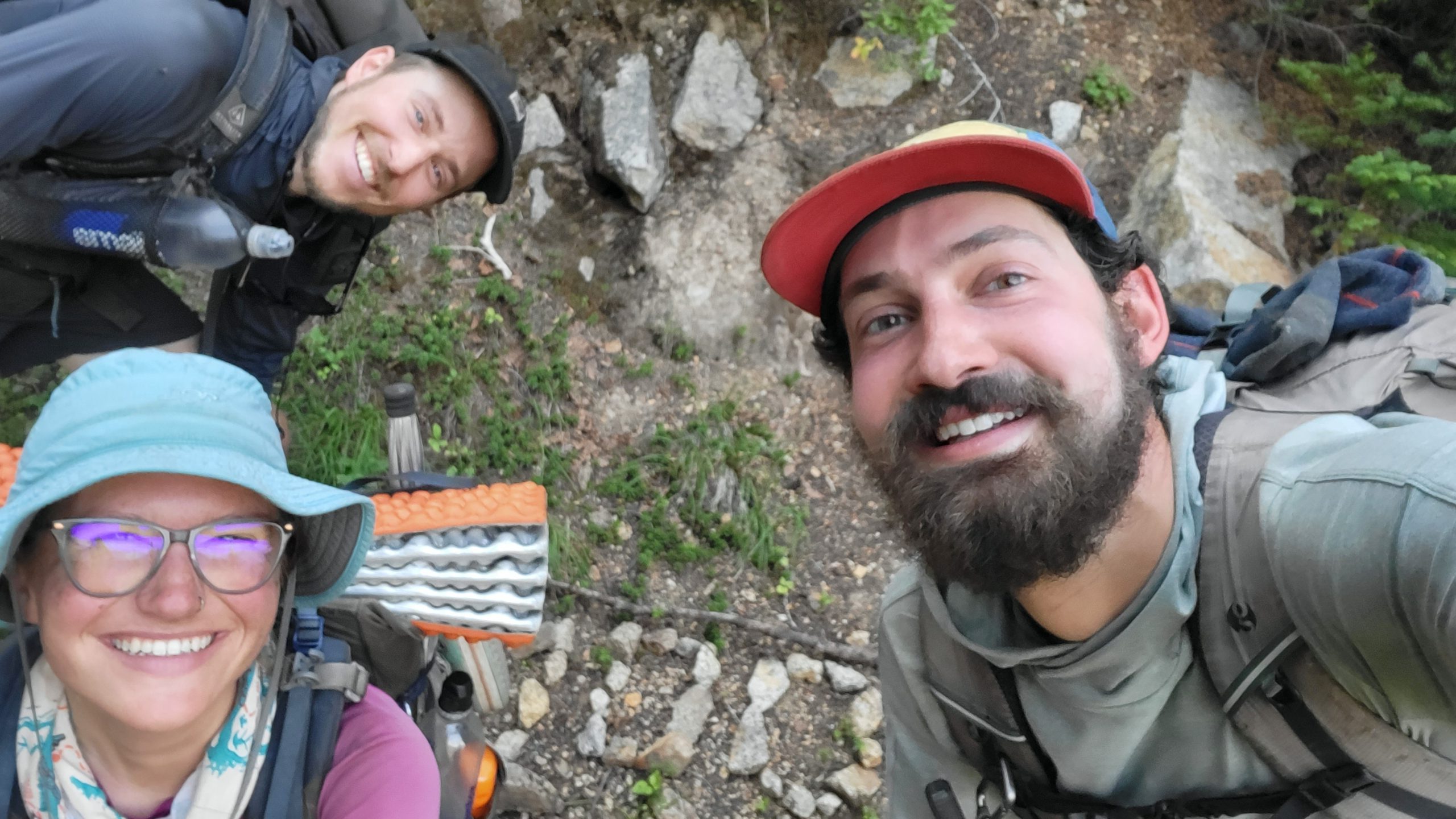 Oregon may be the shortest section on the PCT – and even shorter for me due to the Windigo Fire and Lionshead closures – but it was certainly not lacking in experiences. I could write a short novel on Oregon alone, but because I wouldn’t subject you to that, I’ve narrowed it down to a round of HLB instead. So here we go…

Oregon was beautiful, and the people even more so. I can’t begin to count the number of times I exclaimed “people here are SO nice!” Starting the day I crossed the state line, instances of trail magic were plentiful. While traditional staples like hot dogs were a given (and much appreciated), so were things like fresh vegetables, fruits and salad. Sometimes there would be shade, lawn chairs, and coolers of cold beverages. I can recall one instance where a cidery came out to share all of the above plus the company of their very cute dog, and of course, some of their delicious cider. 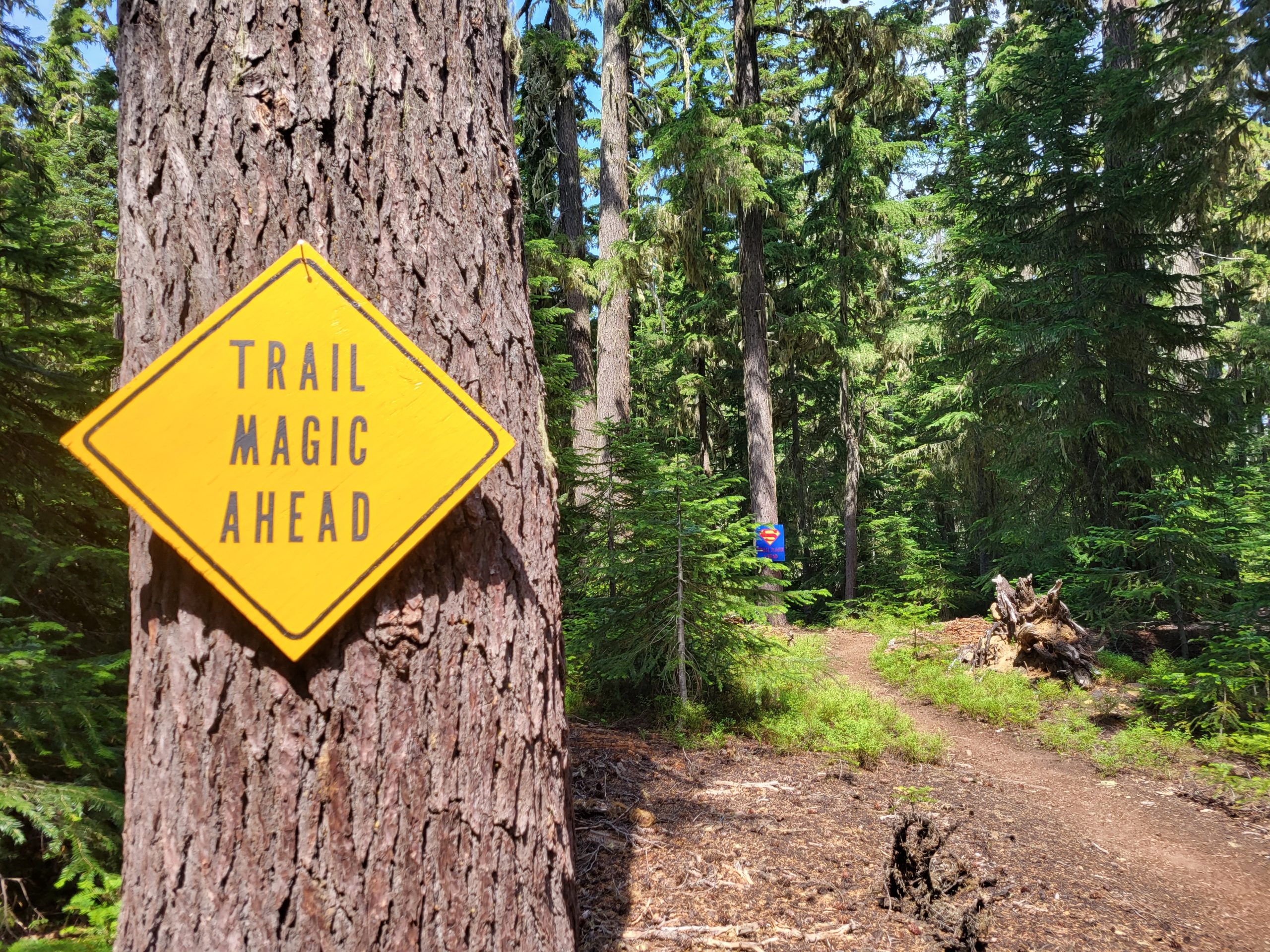 You better believe my pace quickened when I saw this sign!

Trail magic also came in the form of hitches – and there were a lot of them. The day Wall-E, Bandit, and I were forced off trail from the Windigo Fire, the sweetest couple drove us an hour north to Shelter Cove so that we could resume hiking. They even made a stop for us along the way to get supplies and gave us dinner money – we tried to refuse, but they insisted and told us to “treat ourselves”…as if we hadn’t been treated enough already!

There was another instance where we took four different hitches in order to get around the Lionshead Fire closure. Together, the hitches totaled 159 miles and nearly four hours of drive time alone. Miraculously, the whole ordeal only took half the day, which left us with plenty of time for a relaxing lakeside afternoon at Ollalie Resort. While we were standing on the side of the road in between our 2nd and 3rd hitches, someone pulled over and apologized that they weren’t driving in our direction, and then gifted us a bottle of wine!?

There were too many positive encounters to list them all here, but let it be known that trail angels have a special place in my heart and even more notably, the community in Oregon. I am well aware of the responsibility I now have in paying that kindness forward.

Honorable mentions: Hiking along the Crater Lake Rim Alternate at sunrise, the breakfast buffet at Timberline Lodge, and visiting Ramona and Tunnel Falls. Giddy with excitement at Tunnel Falls

I kid you not, the mosquitoes in Oregon were the worst I have experienced…ever. I’ve never been a fan of DEET, but after a couple of close calls with losing my sanity, I caved. Going #2 went from being a generally unpleasant but tolerable activity (fun fact – I love a porcelain throne) to a downright distressing task. I dreaded exposing my derriere to the vicious bloodsuckers so much that I would hold my bowel movements for as long as possible, all while frantically searching for the least buggy spot I could find. Once, I waited a little too long and the mosquitoes won while I was left trying to regain some of my dignity.

Family dinners, something I had come to enjoy, were made impossible at times due to the relentless swarm of insects. Wanting to take a break during the day? You better either be ready to bathe in DEET or have your rain suit ready. Like I said, the mosquitoes in Oregon…

Honorable mention: The Windigo Fire. I’d felt deeply saddened while walking through miles of burn scar in California and Southern Oregon. Yet for some inexplicable reason, I had maintained that a fire wouldn’t…couldn’t happen on-trail during my thru-hike. Having to evacuate the trail and skip 50.5 miles due to an active fire was more eye-opening than anything. Little did I know at the time that I would later have to face fires in Washington, as well.

…was not flat as promised!

Ha! You think I’m joking, but I’m half-serious. To all the future PCT hikers out there, I promise you that I won’t be the one to lie to you. The words “Oregon is so flat/chill/easy” or some variation of the sort will never come out of my mouth. Sure, I’ll agree that many of the climbs were graded decently, but there were still some sneaky ones! When days were easier in terms of elevation, there were usually other factors to contend with instead. Basically, in my opinion Oregon doesn’t get enough credit in general.

Honorable mention: I didn’t see Bigfoot. I’m sure you’re just as disappointed as I was. 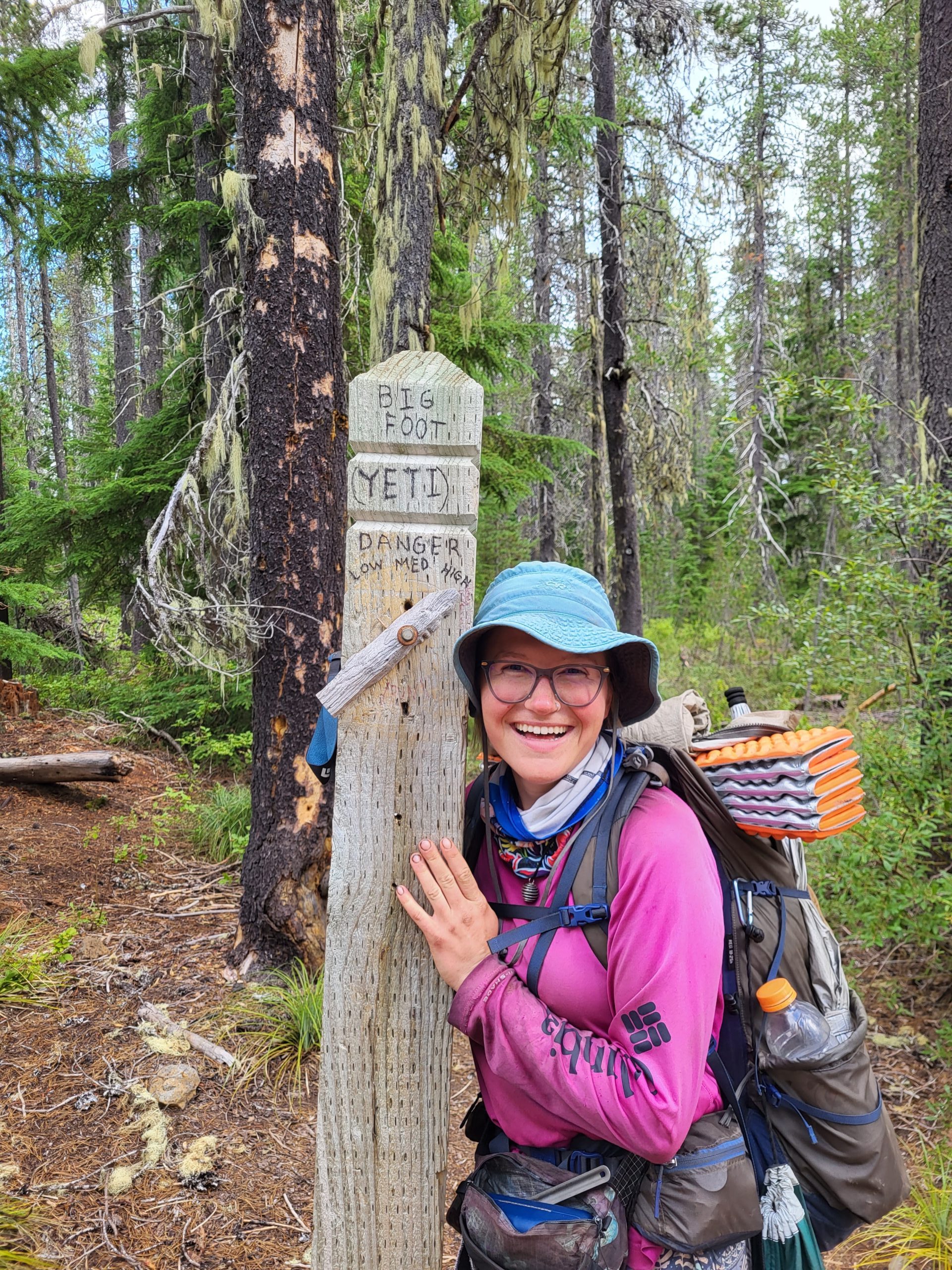 I may not look sad but trust me, I was 🙁

So there you have it, folks – my Oregon experience, HLB-style. I do hope you’ll carry on the tradition!