Northern Terminus of Pacific Crest Trail Closed Due to Wildfires

The Pacific Crest Trail is closed from mile 2636 to the Northern Terminus at the Canadian border due to several fires burning near the trail. No reroute has been recommended at this time.

Numerous lightning-caused fires are burning a total of almost 5,500 acres in remote, difficult-to-access reaches of the northwest Pasayten Wilderness. The Kid, Parks, Schull, and Three Fools fires, in particular, are all burning near the PCT. The Parks Fire has entered Manning Park and is burning near the Monument 78 Trail that connects the PCT to the Northern Terminus, according to the Pacific Crest Trail Association (PCTA). The fire spans the US-Canadian border and is known in Canada as the Heather Lake Fire. 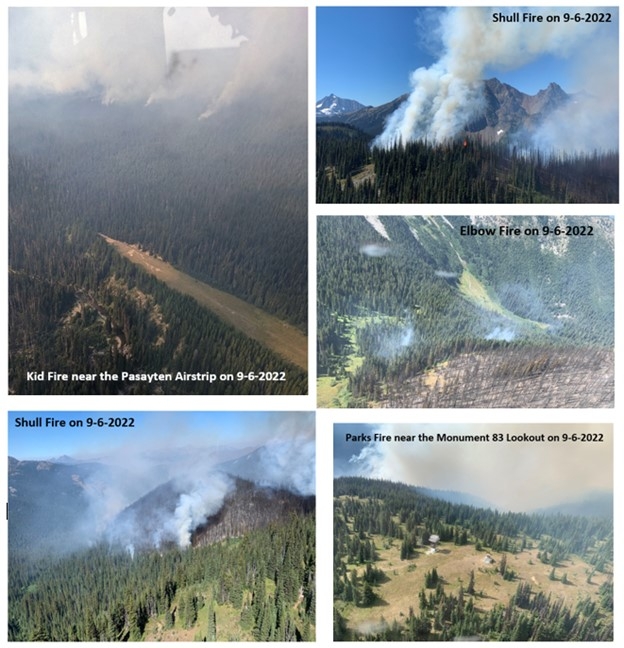 Some of the fires currently burning in the NW Pasayten Wilderness. The Kid, Schull, Parks, and Three Fools fires, in particular, threaten the northernmost 15 miles of the PCT. Photos via USFS.

Hikers should exit the PCT at Hart’s Pass at mile 2623 at this time. The Canadian border remains closed to PCT hikers, and there is no recommended reroute around the fires.

Noah Bernays, a 2022 thru-hiker, said he and his tramily completed the trail on September 1st on the cusp of the closures. As they approached the Terminus, they noticed a large smoke plume that hadn’t been there the day before, and later the orange glow of flames became visible in the distance. The party managed to reach the Terminus. However, by the time they had returned to Hart’s Pass, the trail closure was in effect.

Earlier in the year, the tramily (like so many others) was also rerouted off the PCT due to the McKinney Fire near Mt. Etna, CA. That fire shut down 110 miles of the trail between Mt. Etna and Crater Lake, OR in late July.

This latest closure comes at a time when many northbound PCT thru-hikers would be reaching the end of the trail. Northbound thru-hikers aim to finish the PCT before mid-September or October at the latest. After that, snows in northern Washington can render parts of the trail impassable.

“Reaching the Northern Terminus of the PCT is monumentally important to so many,” PCTA acknowledged in a written update on their website. “We understand that this is a huge impact on people’s plans. We’re so sorry.”

Featured image: The Kid Fire burning near the PCT on September 2nd, 2022. Photo via USFS.