PCT Days 1-7: From One Green Tunnel to Another

In my first seven days on the PCT, I hiked from Callahan’s Lodge in Ashland, OR, to Etna, CA.

I’ve lived in Virginia the last seven years; for the last two, I’ve lived in a tiny town in Central VA that is spitting distance (as my dad would say) from Shenandoah National Park and the Appalachian Trail. Thus, most of my training for the PCT happened at either my gym or on some of the 500 miles of trail in SNP.

For those that don’t know, the AT, and especially the AT in Virginia, is known as the green tunnel. Meanwhile, somehow the most salient image that I have of the PCT involves the desert and some Joshua Trees. So imagine my surprise when I stepped on the trail at Callahan’s Lodge in Oregon to head southbound and discovered it was… a green tunnel.

It was both familiar and completely foreign at the same time. This kind of green tunnel was more fir trees and even still had patches of snow. I still found comfort in the familiarity, even though the shape and scale of it was so entirely different.

The farther I hiked, the more convinced I was that that section needs to be called a green tunnel too. Perhaps even has more right to the name, as I often (especially around Seiad Valley) found myself essentially bushwhacking through trees and shrubs.

Challenges: Bushwhacking, Blowdowns, Snow, and Myself

I’ll be completely honest, I haven’t fallen in love with the PCT yet. Yes, the views are breathtaking, and I often have to drag my jaw off of the ground. But the rest has left me mentally and emotionally exhausted (and physically battered).

I’m used to the AT, which is a well-maintained and clearly blazed trail. The PCT, meanwhile, is a whole different beast. It’s more wild, has a shorter season, and is greater in scale. The blowdowns, overgrown trails, and lack of regular blazes or signage has been a huge frustration. Please don’t ask me how many times I’ve gotten lost; I don’t want to embarrass myself. The snowbanks have caused the same problem. I’ve lost track of how many times I’ve had to get creative with following the trail when snow gets in the way. 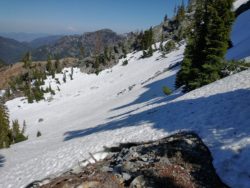 I don’t know why, but I didn’t expect so much snow. Yet, in southern Oregon, I encountered a number of snowbanks. As I ventured into northern California, the snowbanks became larger and more menacing. It eventually got to a point one day where I literally burst into tears at the sight of the snow. I stupidly mailed my microspikes to Kennedy Meadows North, so there was nothing to do but go forward and hope.

In an earlier post, I guessed that loneliness would be my greatest challenge. However, I hadn’t anticipated it hitting me this hard or this early. Making camp for one and boiling water for ramen for one gets pretty old and pretty depressing pretty quickly. While there might not be physical PUDS on the PCT, I’ve certainly gone through my share of mental PUDS.

I had probably my dumbest trail moment (other than getting lost, which I won’t claim full credit for since there aren’t nearly enough blazes) a few days ago. Now, I want to preface this by saying that I’ve been hiking for a long time. As a kid, my sister, my dad, and I would pack hearty lunches and snacks the night before we’d head off to Old Rag in Shenandoah National Park. I know that I need to eat to keep my energy up.

But for some reason, my brain forgot that. I’ve always had a loud stomach; my college friends named it the “demon baby” because it would make itself known whenever I was the slightest bit hungry. So when I wasn’t hearing or feeling hunger pangs, I wasn’t eating.

Shockingly, I moved a lot faster after I had my cheese and tortilla. 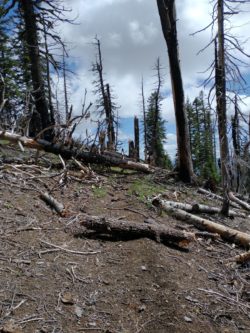 I don’t know where the report originates from, but I’ve heard that if you were able to average 15 miles per day on the AT, you can manage 20 on the PCT. I decided to start slow, and have kept myself under 20 miles so far. Honestly, with the blowdowns and snow getting in my way, getting 20 miles is actually proving to be a challenge. With all the mental stress I’ve found myself, surprisingly, under, I also don’t know if I want to be physically pushing myself too. I’ve hiked over 100 miles of the PCT at this point, and intend to keep my current pace.

I realize that this all sounds like a litany of complaints about the PCT. I’m still recalibrating, getting used to a wholly different trail. I’m ready to keep going, but I’m not about to commit to every single mile of my planned hike. To keep my spirits up, I’m only going to hike the miles that I think will bring me joy.