Which Trail Is It Anyway? 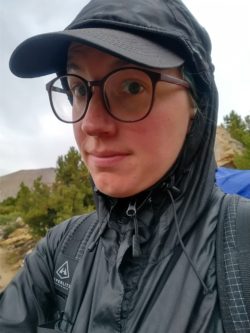 As you can clearly see, I was thrilled with the change in the weather.

While staying with my mom’s cousin was a welcome respite from the trail, it seemed to usher in a new era of the PCT for me: the soggy days. It rained in some way, shape, or form every day from Kearsarge Pass to Kennedy Meadows South. Usually, I could count on a quick shower lasting no longer than an hour and passing through the mountains quickly. But still, as I searched out a sunny boulder on which to dry my gear, I couldn’t help being unfavorably reminded of the AT – and the terrible realization that I’ve gotten so used to hiking in California that I’ve forgotten what to do in the rain. I also learned that the waterproofing on the seams of my rain jacket is non-existent, so there was no difference between hiking with it on or off. Another item to add to my shopping list for when I return to Medford.

Despite the rain, I felt rejuvenated after getting back on trail more than 100 miles south of where I’d left it. Any guilt at skipping even more miles was erased when I spoke with other hikers about the steep, rocky passes I’d missed. My knee, finally feeling consistently better, thanked me for not putting it through that. Then, as I finally left the JMT hikers behind, water became scarce. 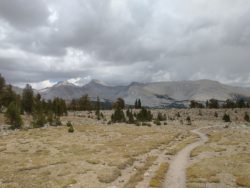 I have three main reasons for not wanting to hike the desert: the temperature extremes, the scorching sun, and the lack of water available. I constantly tell people that, as I’m from the DC area and am used to living in a swamp, I like my air humid and my water abundant. While I’ve gotten used to the dry air trying to steal every last drop of moisture whenever I open my mouth, I hadn’t yet experienced consistent water scarcity, until the last 40-50 miles before KMS. Realizing that, if I hadn’t skipped so many miles, I’d be here a week or two later with even sketchier sources of water finally cemented the opinion that I made the right choice in my jump.

I hiked into KMS one morning and hiked out later that afternoon, just in time to get hit by a rainstorm. Unlike the showers I’d grown used to, however, this one didn’t stop after one hour. Or two. Finally I grew so despondent about hiking in the rain that I just stopped and pitched my tent, using dry clothes to dry the inside of it once I dried myself off and realized that I’d soaked my refuge. I laid shivering for hours before finally drifting off.

I made it another day past KMS, still keeping miles low as I was well ahead of my August 5 deadline. The next morning I woke up to my stomach talking. That’s not entirely unusual, though this felt less hungry and more unhappy. Still, I tried to force down a pop tart.

Warning: if you don’t want to hear about bodily expulsions, skip this section and just know that I was supremely uncomfortable.

Suddenly, I felt something lurch and knew I had to move quick. I barely had time to scrape out a shallow cat hole before the diarrhea hit. At that point, I noticed I felt warm too. But fresh air would help me feel better, right? Let’s just pretend that I wasn’t living in the fresh air.

I knew I wasn’t feeling well, but I didn’t want to turn around or stop. So on I went.

Over the course of about three hours, I made it 2.6 miles, and had to stop for several rests. Finally, I thought that maybe I was just tired, so I pulled out my tent’s footprint to nap in a mostly-flat, mostly-shady spot on trail. Within minutes a sudden wave of nausea overcame me and I barely had time to roll to the side and aim my mouth away from my body before I vomited up water, pop tart, and stomach acid.

Not the picture I expected to share for my “End of Flip 1” celebration.

That was when I decided to turn around. I’d camped near Chimney Creek the previous night and there was a short road walk to the campground. It was the only place I could think of to bail from in my condition.

On my slow, feverish walk back, I had to take several more breaks, vomiting only once more. I also began communicating with my parents via my Garmin and they managed to arrange a ride for me into town. I was shaking, sweating, feverish, and not even remotely hungry as I sat at the empty campground and waited.

In that moment, I praised the Garmin gods. There was no hint of cell service at Chimney Creek, and the campground was a graveyard. I’d used a SPOT device on the AT, but the added features of the Garmin meant that I was actually able to communicate with my parents and was able to safely get off the trail.

I still don’t know what happened. Maybe my filter was leaking and I got norovirus (I thought one of the water sources the day before tasted funky). Maybe something was off with my dinner and I had food poisoning. All I know is that my appetite disappeared and I was in no state to hike.

Alas, my sobo flip had to end at Chimney Creek, roughly 30 miles north of where I’d planned to end.