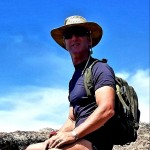 Preparing for the Physical Challenges of the PCT

Failure Not an Option

Only about 20 percent of those who start a Pacific Crest Trail (PCT) thru-hike complete the journey.  Viewed another way, if five hikers were standing together at Campo, only one would see Manning Park. That’s tough odds. For older hikers like me, the odds are even worse.

Some of those who don’t make it find solace in redefining success. That’s OK. But not for me. I want the Northern Terminus victory picture. Therefore, I had to do everything possible physically before getting on the trail to ensure I’m one of the 20 percent.

Several common sayings circulating in thru-hiking social media forums don’t survive simple scrutiny. For example, some might say that “everyone is the same after three weeks on the trail.” Such a statement might be true for activities such as setting up one’s tent or digging a cathole. But putting on miles with a weighted ruck? I don’t think so. Name an athletic event where individuals from different age groups and starting capabilities can simply train for three weeks and then physically perform at the same level. I can’t think of any, and I don’t think thru-hiking is the exception.

Some might say that “it takes about three weeks to gain one’s trail legs.” It takes much longer. Don’t believe me? Go to your local gym. Walk up to the most physically fit, muscle-bound guy or gal—the person bulging and cut, who spends hours a day lifting weights and ingests the right foods and supplements. Ask the individual how long it takes them to put on just one pound of muscle. They will state a number far longer than three weeks.

After the gym, visit your local orthopedic surgeon. Ask the doctor why it takes so long for a tendon or ligament to heal after an injury. They will explain it is because those are two of the least vascularized tissues in the body. For the same reason, these tissues take time to gain strength. Then ask how long it takes to increase bone density to make one’s body less prone to stress fractures. Again, your inquiry will receive an answer longer than three weeks.

What happens in the first three weeks is the nerve pain centers in the back and legs become accustomed to constant input. They become dulled. More miles are added, and an additional load is incurred. Thus, why a thru-hiker is most susceptible to stress-induced injuries for the first 700 miles.

Some might say that “in the end, all thru-hikers log big miles.” That statement is likely accurate. But it is also misleading. Near the end, one is only looking at the 20 percent who have survived the initial physical rigors of a thru-hike. The other 80 percent of starting thru-hikers are no longer on the trail.

When asked whether one should lose those ten to 20 extra body pounds before starting a thru-hike, some might say, “It’s OK. You’ll need the fat for energy and will lose it anyway by Kennedy Meadows.” Ask these same individuals if one should carry ten extra pounds of food starting at Campo just in case. The responses would be likened to “ounces equal pounds, and pounds equal pain.”  So why the difference? There is none. Weight is weight. The knees don’t care where it comes from.

I was in pretty good shape before deciding to hike the PCT. Having spent over 30 years in the US Army, physical fitness had been part of my job description for most of my adult life. Even after retirement, I maintained a weekly fitness regime, which enabled me to run a half marathon on any given day. But it had been a while since I had put a ruck on my back.

After deciding to hike the PCT, I grabbed one of my old backpacks, loaded it up with 30 pounds, and took a walk. After an hour, my knees were screaming. My legs had become toned for running, not backpacking. No problem. I knew I had seven months to prepare before I would be standing at Campo. I had time to adjust the body to meet the physical challenges of a thru-hike.

Having spent time participating in athletic events throughout my life, I hold three truisms as an older athlete. First, it takes me longer to ramp up than in my youth. What took three months now takes five. Second, my body is more susceptible to injury than before. I must carefully gauge my progress to ensure I do not suffer stress or overuse injury. And third, it takes longer to heal if I were to become injured. No longer can I shrug off an injury as a two- or three-day inconvenience. Rather, an injury might curtail training for weeks or cause me to cancel my athletic event altogether.

At first, I maintained my normal weekly fitness regime of running and weight training. To it, I added one to two hours of carrying a 30-pound ruck, three days per week. Before long, these sessions increased to three to four hours. The rucksack weight also increased to 42 pounds, enabling me to build leg strength without adding time. This phase of training lasted for three months.

During the second phase of my training, I reduced my running miles per week but kept increasing ruck miles, rotating between a 42- and a 30-pound rucksack to mix strength and endurance training at four and six hours each. This phase wasn’t easy. It hurt. I adjusted my schedule daily to ensure growth without debilitating pain or injury. After each session, I could feel my thighs growing. Every muscle twinge was pain I wouldn’t be feeling on the trail. Phase two lasted for two and a half months.

For the last six weeks, I worked on endurance. Curtailing running almost entirely, I hiked 15 to 20 miles per day with a 30-pound ruck, five to six days a week.  The intent was to get the body used to the daily grind of the trail—stress during the day, recovery at night and rested by morning to do it again.

Two weeks before leaving for Campo I knew my body was ready. It told me so. Coming off a six-day training session, I took a day off so the wife and I could catch up on errands and appointments. We were finished and back home by midafternoon. But I didn’t feel right. Something was missing. I put on the ruck and hiked 15 miles before dark.

I needed the fix. Mentally and physically, I had been conditioned to backpack every day. It was my new normal. All done, I logged over 1,000 miles with a weighted ruck in the seven months before getting on the trail.

In addition to training, I lowered my body weight. I had a Body Mass Index, or BMI, of 23 when I decided to hike the PCT. BMI uses a formula based on one’s height and weight.  The number is used in the health industry to gauge one’s overall fitness without extensive testing. A BMI of 23 is considered normal or fit.

To get ready for the PCT, over a three-month period I dropped ten pounds, lowering my BMI from 23 to 21, a still normal but leaner number. I reached what used to be my race day weight when I participated in marathons and triathlons in my youth. But unlike before, I subsequently kept the weight off, allowing my body to become efficient at operating at the reduced weight.

Earlier in my life, I dropped to near-starvation conditions, when my body was cannibalizing muscle for food. It was one of the opportunities afforded me while attending the US Army Ranger School. But because of this prior experience, I know I have plenty still left in the tank even at my current reduced weight. For my knees, my new body weight transfers to ten stress-free pounds of ruck weight.

I am not advocating for others to follow the training plan outlined in this article. It’s mine. It is what I chose to physically prepare for my PCT thru-hike. I am also aware that I could twist an ankle 100 yards north of the Southern Terminus, ending my thru-hike dreams within minutes of starting after months of preparation and planning. But barring an injury from an accident, I am confident that I have done all that I could to ensure my success.

My body is ready. It needs the ruck, the trail, and the miles to feel normal. And I will stand on the Northern Terminus monument.

See you on the trail.

I am Mike Current, 57-years-old, and retired military. I served for over 30 years in the US Army. After retirement, I opened two small businesses. I am hiking the Pacific Crest Trail (PCT) in 2020. I will be vlogging (video journaling) my experience for The Trek. Follow me on my journey. Subscribe to my videos or Facebook page under Old Man and the PCT 2020 or my Instagram at oldmanandthepct.