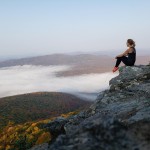 After a scary 18 hour stay in Idyllwild, we headed back to the Trail to tackle the first mountain range on the PCT – the San Jacinto Mountains.

After getting my resupply box from Paradise Valley Cafe with my fleece and toe socks, we got on the trail by 10 am. Getting a resupply box is somewhat of a burden. There’s always too much food and things you thought you’d need but don’t. Putting on a heavy pack after a resupply is demoralizing; when I got my pack on and Chip in the pouch, I thought I wouldn’t make it up the mountain. 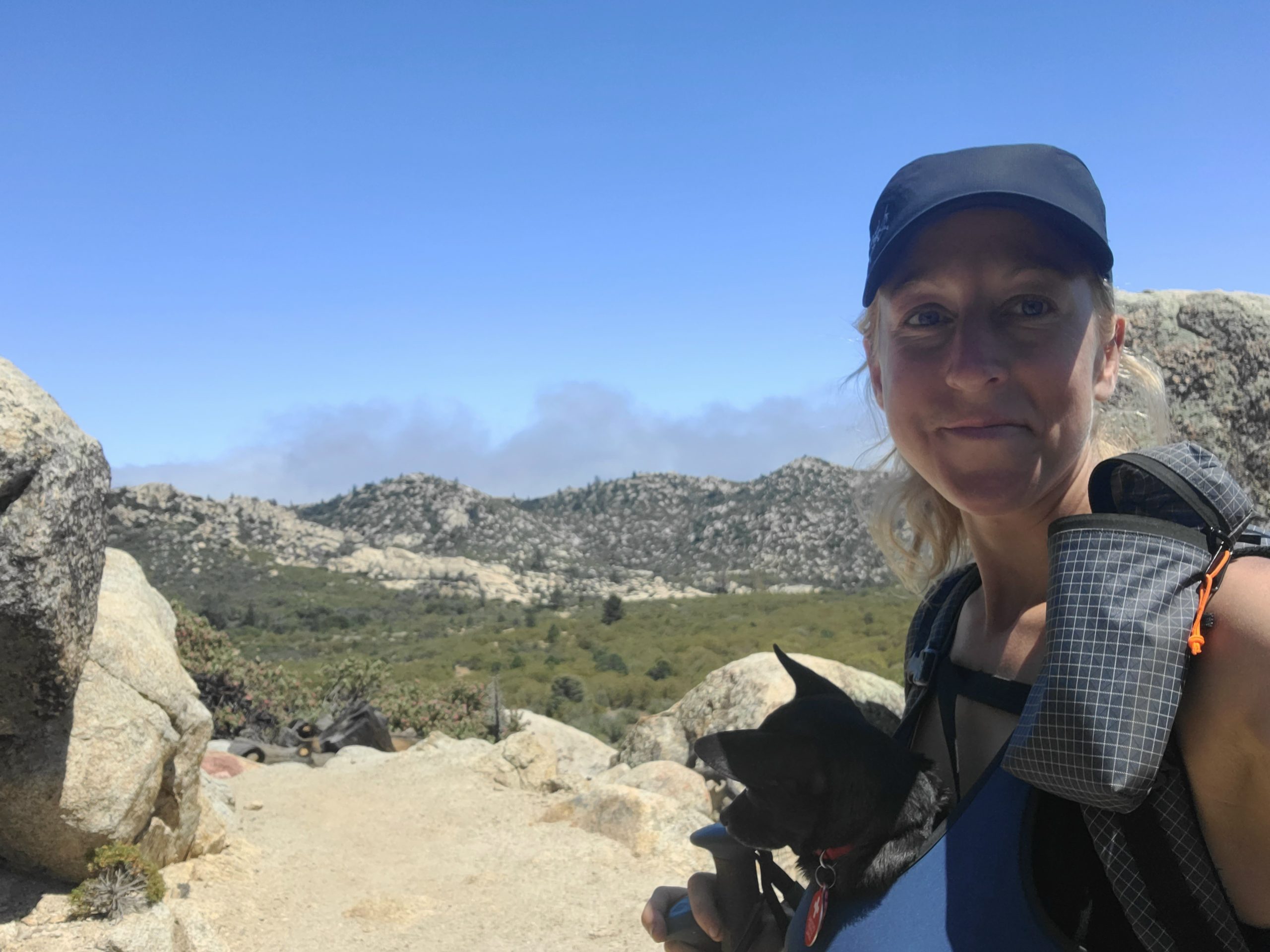 I was so slow and my shoulders hurt terribly. The worst part was chip’s paws started to hurt so I knew I’d have to carry him for a few days until they got better. That meant carrying him over the entire San Jacinto Mountain range.  Ugh.

Anyways. Up we went, slower than normal. Huffing and puffing I fought for every mile. I started to get into my head thinking I couldn’t make it to the summit of San Jacinto. And how would I get through the Sierra?! But I kept putting one foot in front of the other and miles were made.

Then came the big water dilemma. Do we hike 1mi down ‘moderate’ terrain to a great water source or 0.25mi down a steep hill with no trail? We decided on the 1mi and boy was that a long mile. The water was nice but the hike back up was miserable, especially considering we made no forward progress on ‘our’ trail, the PCT.

After water, we continued upward and the scenery was beautiful. On the west side, there was a cloud layer below us,

and on the east side, it was totally clear. The higher we went the clouds started to spill over the ridge we were on and disappeared into the other side. It was wonderful hiking that rejuvenated me mentally to keep going.

The trail goes down a few thousand feet at this point, only to go right back up a few thousand feet. The down part was fantastic of course, but going up the trail was so steep and not well maintained. And the altitude was getting to us. We had to stop almost every minute to catch our breath to keep going.

The trail then hugs a ridgeline and becomes very narrow and steep on the one side. There is a plaque here for a young hiker who lost his life last year when he went through early while snow-covered. Seeing that was a reality check and a reminder to take safety seriously.

It was getting late so when we arrived at our campsite only to find intense 70mph wind gusts, we didn’t have a choice to make it to another site – we’d have to make do. This was my first time setting up my tent in high wind, so I was worried about stakes ripping out at night.

I rushed around re-tightening each guy-line and piling rocks on the stakes until I had the perfect pitch. Even though it was windy it was a beautiful campsite and I got to fall asleep looking down on the clouds.

Luckily the wind died down around midnight so I got some decent sleep. Sunrise was beautiful as always so it’s hard to move down the trail when you want to stop and capture every moment.

Almost immediately the obstacle course started.  We had to climb around a rockslide, then over and under massive trees blocking the trail. We climbed up for a few thousand feet, going slow and stopping for breakfast on a perfectly located rock platform.

After this point, the trail starts to cross snow, at first in small batches, and then almost constantly. In the early morning the snow is still hard and we cross easily.

We stopped to fill water in a stream formed from melting snow and continued upwards. Day hikers started to appear from the various side trails, stopping to ask us lots of questions about what we’re doing, even offering us snacks and water.

Another quick break to collect water and we were almost to the top.

We rested for a bit, chatted with day hikers, and started the long descent. It’s 9,600ft to get back down to the road, almost constantly downhill, so we wanted to get as far down as possible to make the next day easier. The descent took longer than expected and seemed to drag on forever. We kept getting lost in the snow, following other misguided footsteps until we realized our mistake.

The snow was also slushy and slippery by the afternoon and made for slow forward progress and many slips. We got our last water for 20 miles and headed down to set up camp before making it down to I10 tomorrow.

We got up early excited to get down off the mountain and on to our planned zero day (day with no hiking, zero miles) at my friend’s aunt’s house in Palm Springs. We also heard there was trail magic down at the water spigot so that quickened our steps as well.

We were now in the valley between Los Angeles and Palm Springs, where some of the largest wind farms in the US are located. We had a 2mi road walk and a 2-mile trudge through the sandy desert with intense winds that power the turbines. It was a miserable walk. So hot despite the wind. So much effort expensed in the deep sand.

Finally, we made it to Interstate 10! Trail magic!  We finally came across our first trail magic! There were coolers and coolers of ice-cold beer, soda, oranges, grapes, snickers bars, potato chips, Fritos, and so much more.

Lots of people stood around guzzling cold drinks and stuffing their faces with all the delicious trail magic. It’s a real sight to see all huddled under the I10 looking like we live here permanently.

We relished in the shade, fresh watermelon, and Chippy gnawed at a cheese stick.

We ended up spending a couple of hours here chatting with trail angels, mostly previous PCT hikers themselves, and talking to other hikers coming in hot from the trail.

When it was time to go the trail angel,  Chalice, graciously offered to drive us the 45 minutes to the aunt’s house, even when we realized she lives in La Quinta, not Palm Springs. Thanks, Chalice!

We finally arrived at our home for the next 24 hours. It’s a beautiful home.

Southwestern style with an open concept, sitting courtyard, tons of light, pool and spa. We each had our own wonderful rooms full of lush fabrics and our own bathrooms and showers. The utmost luxury for hiker trash like us. His aunt is seriously the sweetest woman in the world. She’s a pleasure to talk to and the kind of person everyone could use in their life. She even had fresh guacamole waiting for us!

We showered up, did laundry, made a grocery trip to resupply for the next leg of our journey, and went to a pet store. I got Chip some paw moisturizer and little balloon booties so he could better walk on the abrasive sand.

We all got dinner together at an Italian restaurant in town and headed home for our first sleep in a real bed!

I tried to sleep late but I am so used to getting up early that I was awake by 530 anyways. I went out by the pool to call my mom and Auntie brought me out some coffee and a blanket because it was chilly.

Swoon. We then had fresh fruit, eggs, and toast and decided to get in the jacuzzi before leaving for the trail. When in Rome… 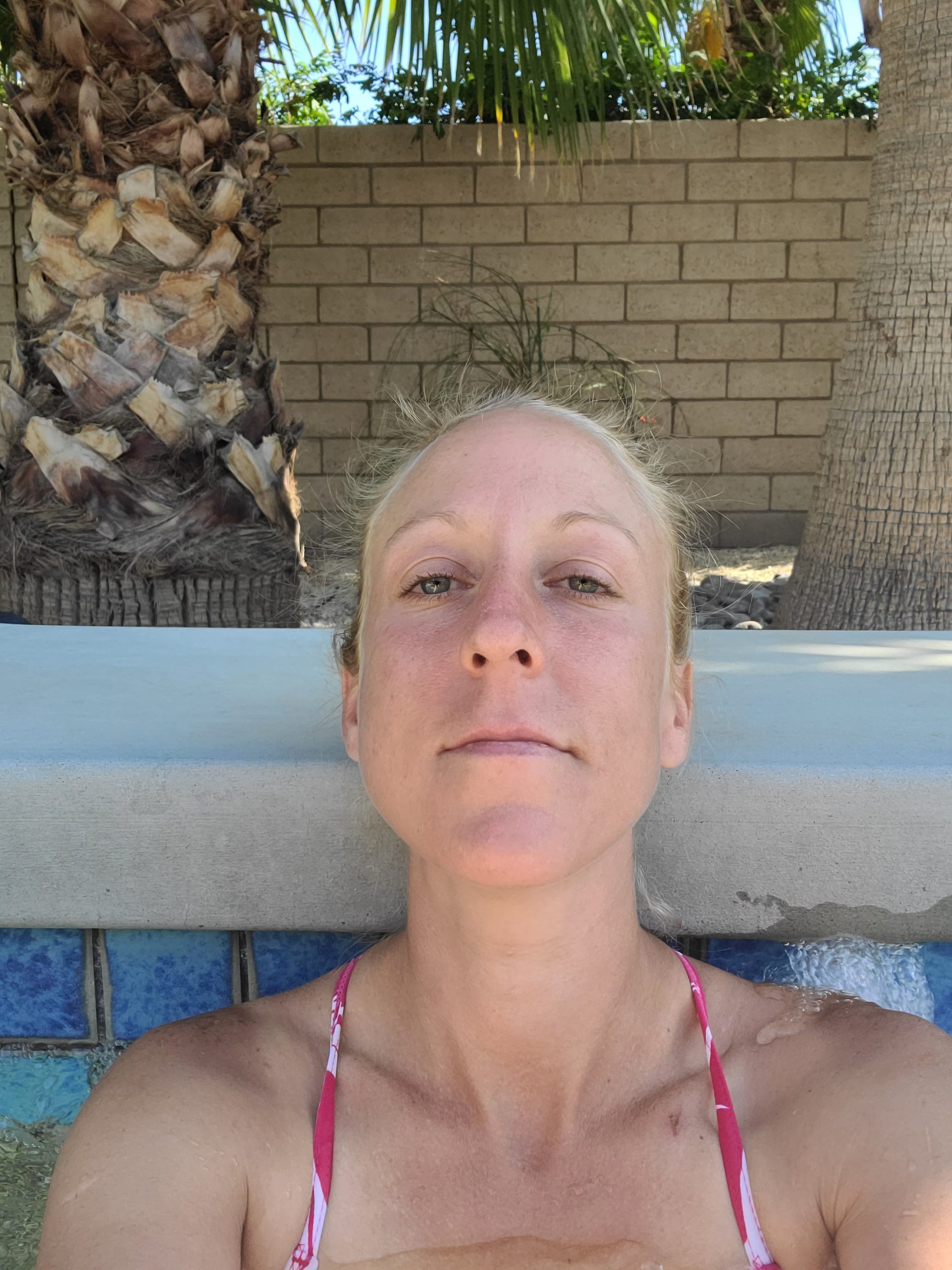 After weighing ourselves and our packs, we headed back past the wind farms to where we left the trail only 24h ago. We were nervous to get on the trail for some reason. Maybe nervous to leave the creature comforts or nervous for the big climb ahead, but we loaded up our packs and went on our way. This was the first time Chip hiked in a few days and he happily followed behind in his new booties.

The first 10 miles were very hot, arduous, and monotonous. We climbed up and then descended into a river basin where we finally found water.

There was a large group of young people sitting in the river, drinking beer, smoking, and enjoying the heat.

We stayed for a bit but then wanted to get further up the mountain tonight so we’d have less to climb tomorrow. Another 9 miles of climbing up, some big rattlesnakes, and another small descent had us in a new river canyon. We made camp on a dry wash here for the night.

Hey there Trekkers! My name is Jenn and I'm starting a PCT thru-hike in April 2021. After living in Asia for 5 years and solo backpacking around the world for 2 years, I have changed my definition of 'backpacking' from living out of a backpack and traveling via plane, trains and motorcycles, to living out of a backpack and traveling by foot. I hope to see you on the trail!