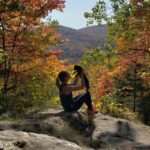 Getting Into the Swing of Things – Days 4-6

I woke up in Julian with terrible foot pain. I couldn’t wait for 2 Foot Adventure to open for some new shoes and blister patches. We started with some breakfast, free pie from Mom’s and chocolates and cider from Cider House. Then to 2 Foot Adventures for the foot guru, Mary!

This woman is a foot god. The moment I tell her I’m having foot issues, she plops me down on the bench and starts untying my shoes and inspecting my feet. She gets all up in there with dirty hikers’ feet! She up-sized me 1/2 a size to some Altras – I have them at home and know they work well for me, but many people don’t do well with zero drop shoes. Then she taught me how to use blister patches, Leukotape, foam pads, more Leukotape, and toe socks. I thought I had my gear dialed in before this trip, so to have so many horrendous foot issues was embarrassing. But I walked out of there saying bon voyage to my old shoes, now too small for my swollen, blistered feet, and back on the trail confident. Thank you thank you thank you Mary!!!

After another seamless hitchhiking experience we were back at scissors crossing and ready to head uphill in full sun at mid-day – again, brilliant choices we are making. 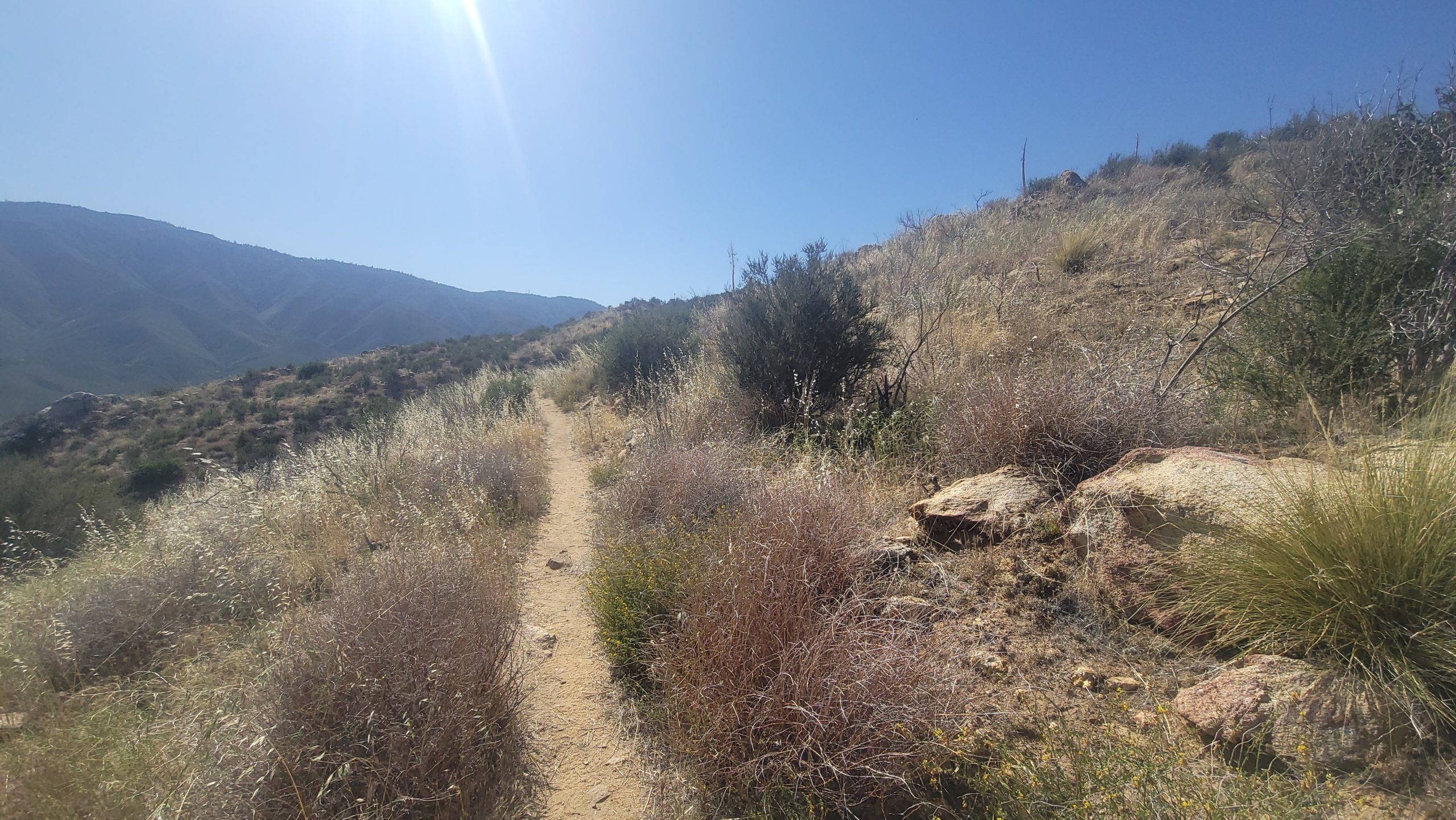 The trail here is brutal and brutally hot. If it weren’t for the wind we would have been in trouble. But with big gusts blowing the hat off my head we slugged forward and made quick work of this mountain trail. Eventually, we made it the 14 miles to a campground area with a water source a third of a mile down the trail. We only passed a few hikers on trail all day but there were dozens at the water source, many already setting up camp for the night.

After calculating how much water we might need to make it to the next water source, we loaded our packs up and headed out. We started to rush down the trail because we learned that the resupply package had survived the fire and was now waiting in Warner Springs, but could only be picked up before 7 am or after 3:30 pm; that would ruin our plans tomorrow. We tried to calculate how much sleep we could get and make it the 18 miles to get there by 7 am, but fortunately, some phone calls managed to have the package left outside for us so we could camp whenever and not rush.  Phew.

We found another cute little campsite on the mountainside and crawled into our tents exhausted.

We’ve gotten in the habit of getting on trail by sunrise and today was no different. We moved quickly this morning and reached the 100-mile mark by 8 am. 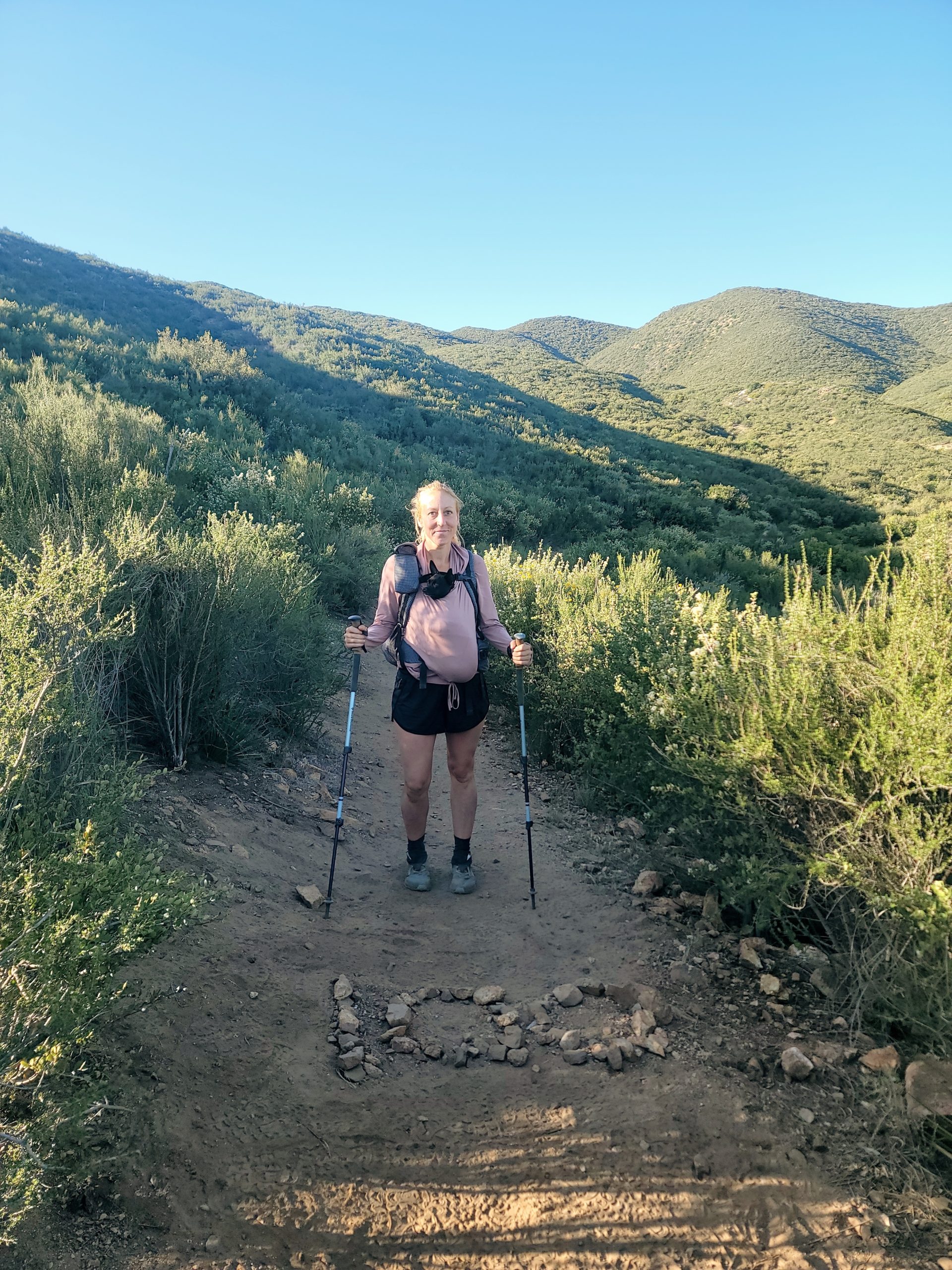 The trail here is easy – smooth, downhill, and relatively flat so it was an easy 10 mi by 10 am today. Down at the next water source we chatted with another group of hikers, and then on through rolling meadows full of cattle – a welcomed change of scenery. Chip is not a fan of livestock and started growling and barking at the cattle. One particularly bold and horned bull did not take well to chip’s territorial grunts. He started to charge us and stopped, charge and stop – We picked up the pace.

Soon after we made it to another well-anticipated landmark,  Eagle Rock! We climbed around the rock, took some fun photos, and back on the trail to Warner Springs. 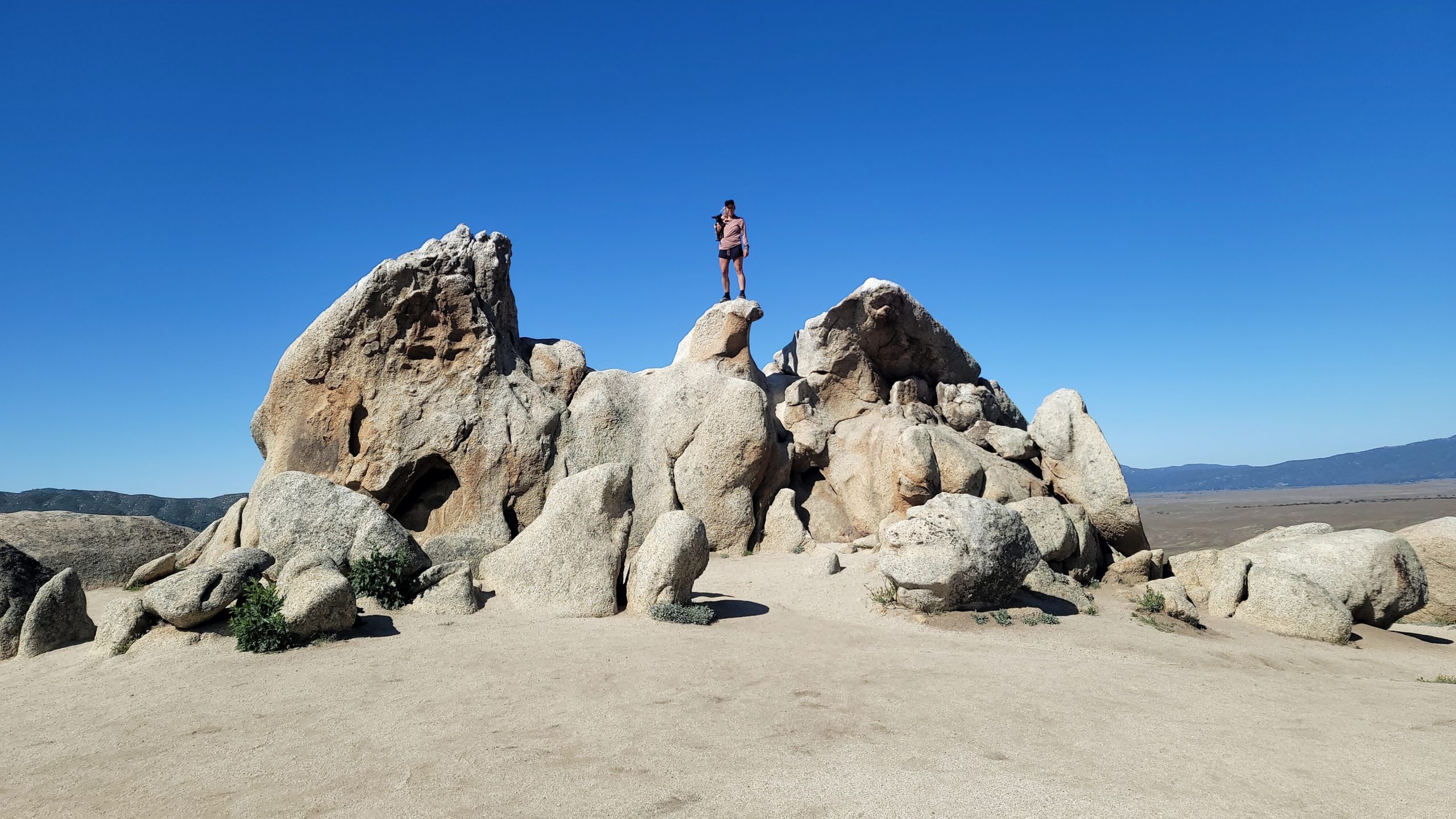 My friend’s resupply box from the Montezuma fire was waiting for us at the Warner Springs Community Center so we stopped by there for some lunch and resupply in the shade during the hot midday sun. We tried a bit of trail mix from the burn box and at first, it seemed OK, but then a horrific taste started to develop – somewhere in between melted plastic and gasoline. We soon realized some of the food, mostly things in ziplock bags, had been contaminated from the smoke and had to be thrown out. It takes a lot for hikers, who eat dirty food that’s fallen on the trail, to throw something out – so you know this was bad. Time to hit the trail again.

The rest of the afternoon was pretty miserable, to be honest. It was hot out, the sun was blazing and there was no shade at all. The trail goes through some more fields and then follows a small stream up into the mountains. You would think this means it’s cool or there’s shade, but there isn’t. It was miserable. I lost chip at one point and had to throw down my pack and sprint down the switchbacks to find him – he tried to take a shortcut and got stuck in the brush.

The trail climbs up for another 10 miles to a water source. Well, barely a water source. Down a hill, there’s a trough of water full of dirt and bugs. You scoop water out with an old gallon milk jug. Oh, the things you do on the trail.

We considered staying here for the night but there wasn’t much space and it was very crowded with people claiming tent spots. We decided we had to go on another 5 miles, maybe 8 to Mike’s place if we were lucky. My feet were so bad at this point I was moving at a snail’s pace up the mountain. It felt like forever to go those 5 miles. It was very crowded again but I knew I couldn’t walk any further so we found tiny spots in between other hikers’ tents and set up for the night.

We awoke in the middle of a cloud which was a nice surprise because it meant cool hiking all morning.

We stopped by Mike’s Place,  a legendary PCT home on the trail where hikers can stay. Sadly we missed dinner the night before but we got some hot coffee and good conversation which was all we needed. The biggest downside of hiking fast and far is we don’t meet many people. We pass through these hiker bubbles every couple of days and hear great stories but don’t really get to know people. It’s probably my only disappointment thus far on the trail, and it’s my own fault.

Warmed up we started down the mountainside through the clouds. It was a beautiful morning as we descended back to the dry desert below. Multiple long 10+ mile-long water carries got us to Mary’s place. We had heard that we might be able to stay here with laundry and showers, but alas this was not available when we arrived.  We pushed the extra seven miles to get to Paradise Valley Cafe with the hopes of making it in time for the famous burgers. It was an easy seven miles, so we got to Highway 74 in no time and had a hitch within five minutes.

Paradise Valley Cafe was closed, but there was a trail angel not only willing to drive us to town but said we could do laundry and have a hot shower. We were sold. As we waited to leave he started drinking, which started to concern me, but my better judgment was blinded by the promise of showers and laundry, so we got in the car anyway. Big mistake.

He started driving 100mph, texting, swerving, passing people, and almost hitting a cop. I was petrified. I said I have anxiety and asked if he could slow down which he seemed to think was funny, but eventually slowed a little. Oh, and I was in a seat and buckled. There were three other hikers in the trunk with no seats or buckles during all of this. It was the most terrifying car ride of my life and hopefully the most dangerous thing I will do on the PCT. 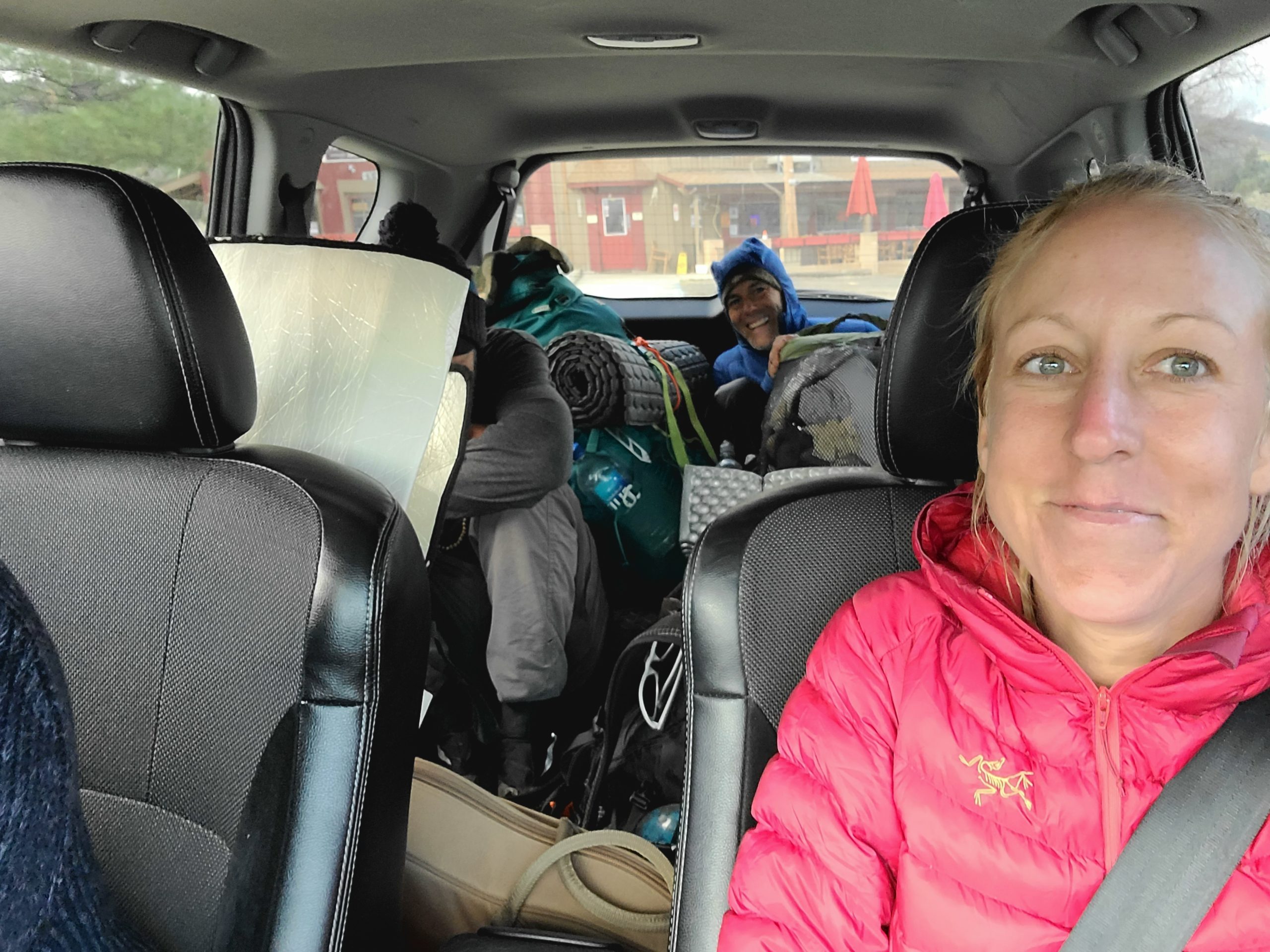 His home wasn’t much better. Icy showers, malfunctioning washer and dryer, too many drugs for any human. I didn’t sleep more than two hours on his floor, but it was a very eventful night with many hilarious memories. PSA here folks – don’t get in the car with a drunk driver, even for showers and laundry.

Hey there Trekkers! My name is Jenn and I'm starting a PCT thru-hike in April 2021. After living in Asia for 5 years and solo backpacking around the world for 2 years, I have changed my definition of 'backpacking' from living out of a backpack and traveling via plane, trains and motorcycles, to living out of a backpack and traveling by foot. I hope to see you on the trail!