“Oh, you’re going the opposite way!”

I can’t tell you how much this phrase began to grate on my nerves over the 2,650-mile trip from Canada to Mexico. Not because it was meant to ridicule or condescend. People just don’t seem to know that a southbound (SOBO) hike of the PCT can be done. It’s a relatively small group of us, true, but the PCT has a strong history of SOBO hikers, and there are many advantages to choosing this itinerary. 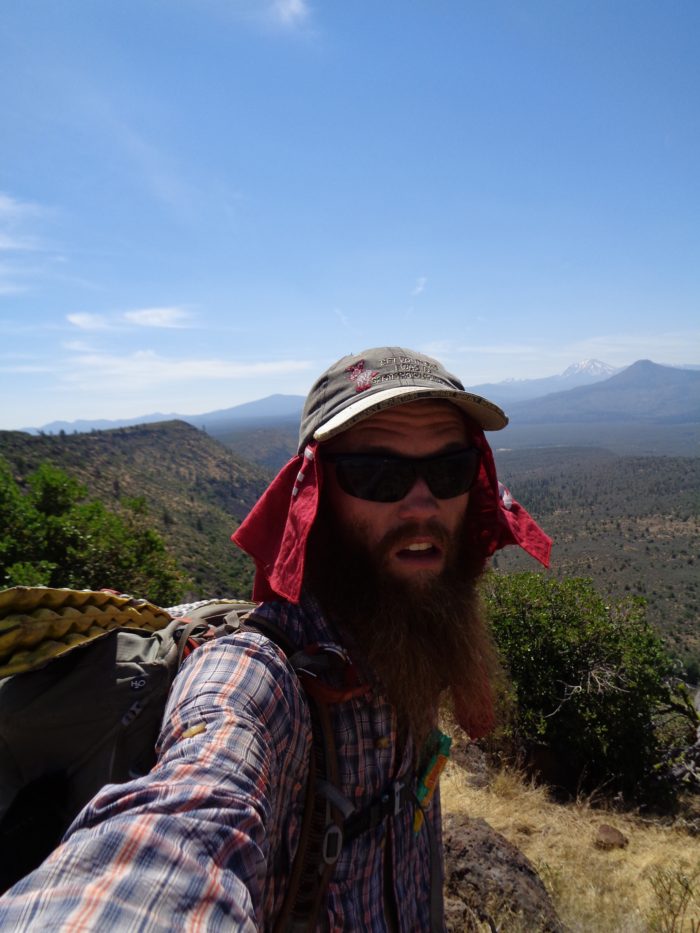 But walking south comes with its own unique set of challenges. Not the least of which is the sheer lack of information about how one would go about a SOBO hike, compared to the relative wealth of resources for PCT NOBOs. The PCTA’s website has only two pages that mention SOBO hikes, along with a few blog posts that strongly discourage people from going SOBO.  And, to be sure, it’s not for everyone. 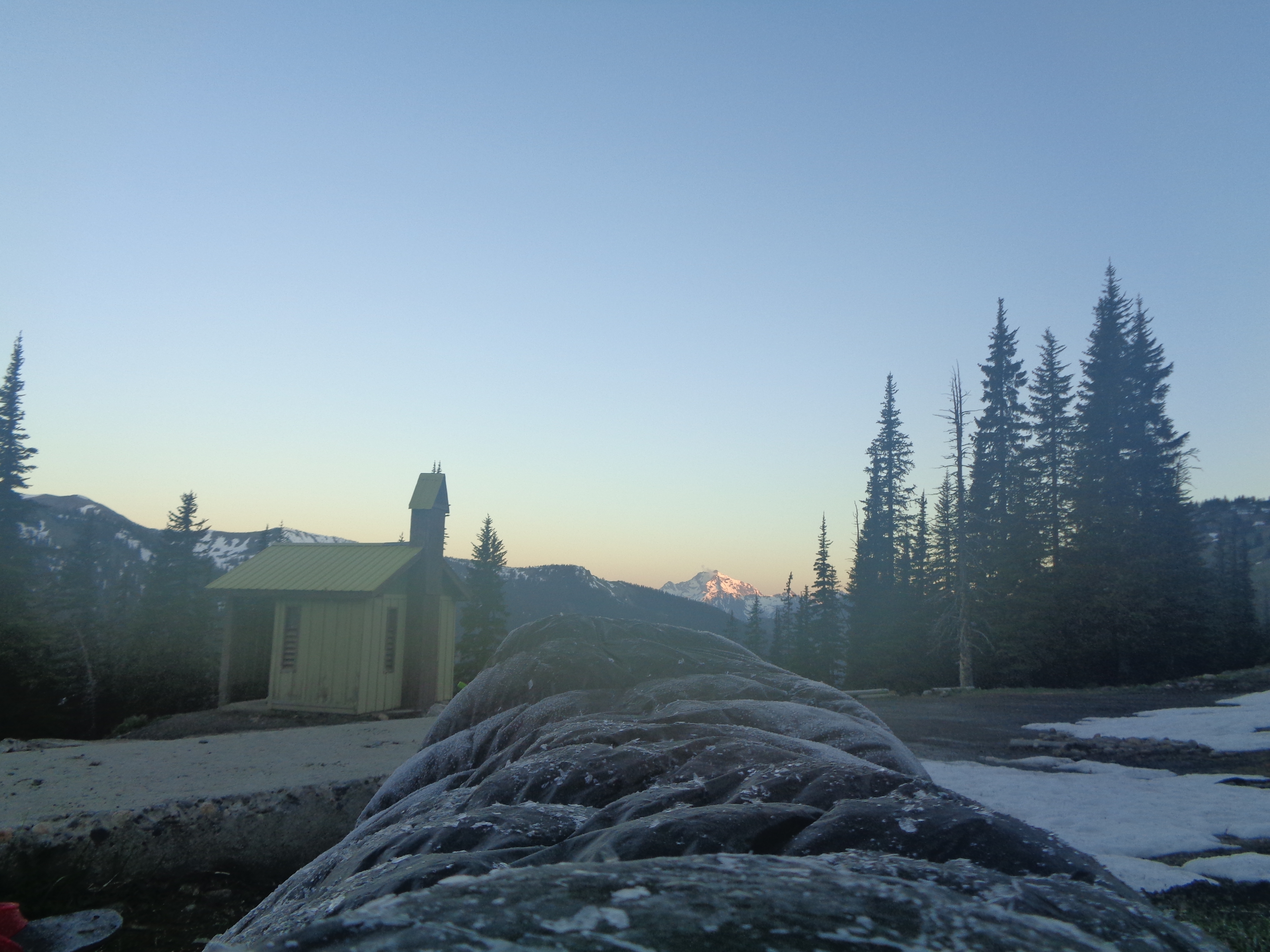 It might still be really cold up high when you start. (Hart’s Pass, June 21, 2017, approximately 30 miles south of the Canadian border.)

But if you’ve made it this far into considering a southbound thru (or other long-distance) hike of the PCT, you should absolutely give it a go.

More drops in the bucket.

Like I said, one of the major obstacles in my preparation for my 2017 SOBO thru-hike was the lack of SOBO-specific information and advice. I managed alright in one of the most difficult years on the PCT in recent memory, but there were lots of questions I wish I had had answers to before leaving.

Some of the questions I heard from other trail users surprised me. There were really good ones that I hadn’t even thought of during my preparation. Others seemed so ridiculous that I struggled to come up with an answer.

I reached out to a few other 2017 SOBOs to answer some questions that seem to come up frequently both on and off the trail about hiking from Canada to Mexico. A huge thanks to Smurf, Per Bear, Kirby, Cockblock Moses, All Day Err Day, and The Trek’s own Badger for contributing. I hope that by making even a small contribution to the existing information, more people will consider this amazing alternative itinerary.

This is the first of a five-part series aimed at providing useful information for future PCT SOBOs. We’ll talk about the reasons and appeal behind a SOBO hike, as well as how in the heck you even get to the border. Later on we’ll cover weather, basic logistical considerations, and pro tips that we wish we’d had ourselves.

There is lots more to come. If you’re thinking of making the trip from Canada to Mexico and have any questions for those of us who have been there, leave a comment or contact me through Instagram.

Why did you choose to hike south?

Righteous: SOBO made sense to me for a few reasons once I had decided to hike the PCT. I also went SOBO on the AT, which honestly had a significant impact on my decision. It also provided a few logistical advantages. I could stay with family in Bellingham, Washington, for a few days before getting a ride to the start. As a bike mechanic, leaving later in the year allowed me to keep working for a few months of the busiest time of year. Gotta have that $$$ to go on a long walk. Probably the rest of it was accepting and confronting all the challenges it seemed to present. I wanted to test myself against the obstacles I would undoubtedly face right from the start. 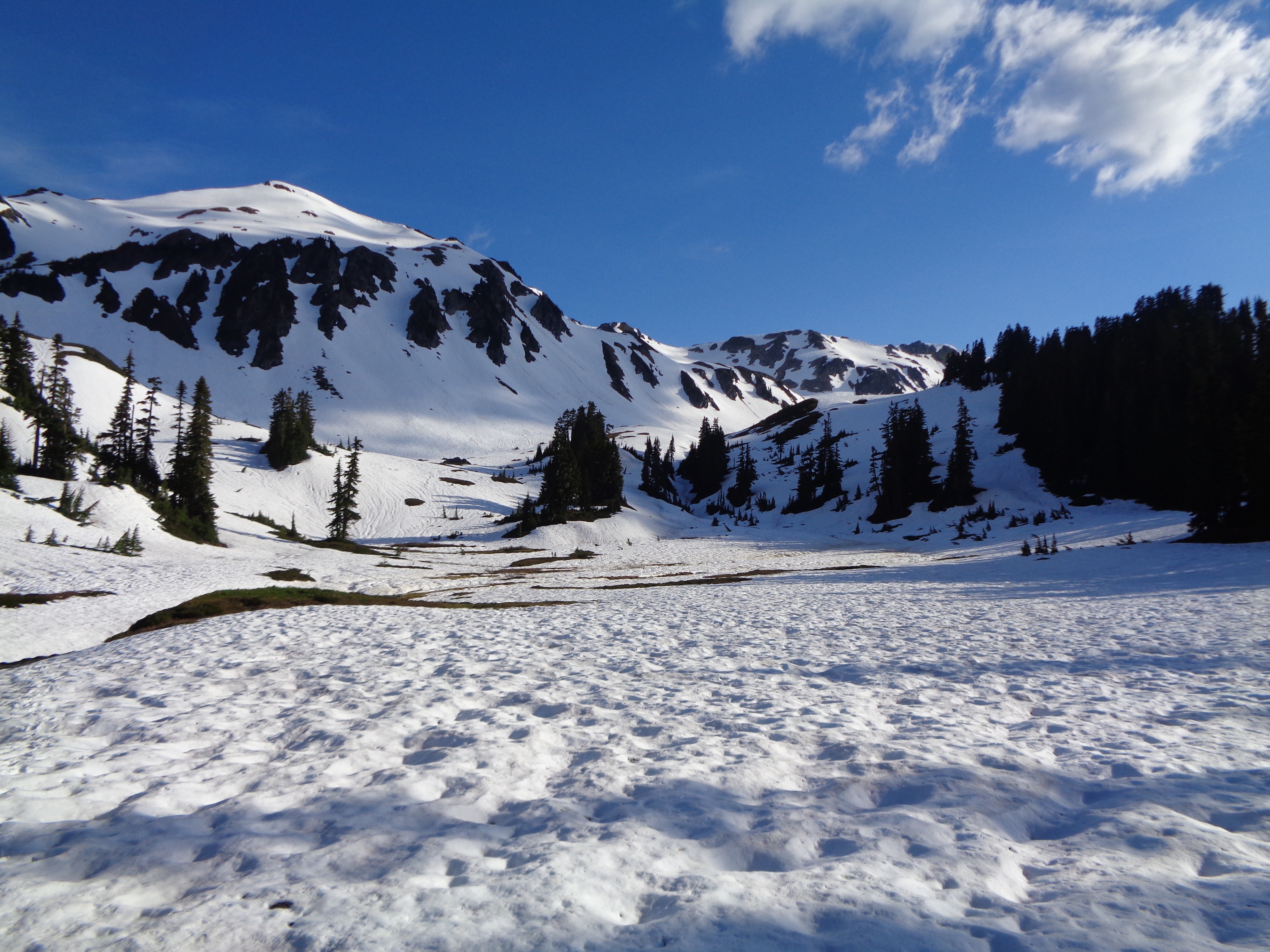 Smurf: Primarily start time. I only decided to do the PCT two months before starting so SOBO was the way to do it. I was also looking to avoid the crowds that start NOBO as I wanted a quieter hike.

Kirby: SOBO or bust? I prefer fewer people on trail in the beginning of a hike, the timing works better for me, and the weather from start to finish can’t be beat.

Per Bear: No rain in Washington. Which is a bigger benefit than you can imagine. Washington gets lots of rain and it’s so beautiful it would be a shame to suffer your way through it. // Flowers in Washington. // Lower temperatures in the desert. // Fewer people, but you still meet people going your way. // Start off with a lighter pack (less water to carry than in the desert). // You get altitude training in the Sierra by starting with the lower passes and building up. This also makes every pass you go over in the Sierra more spectacular than the last one. 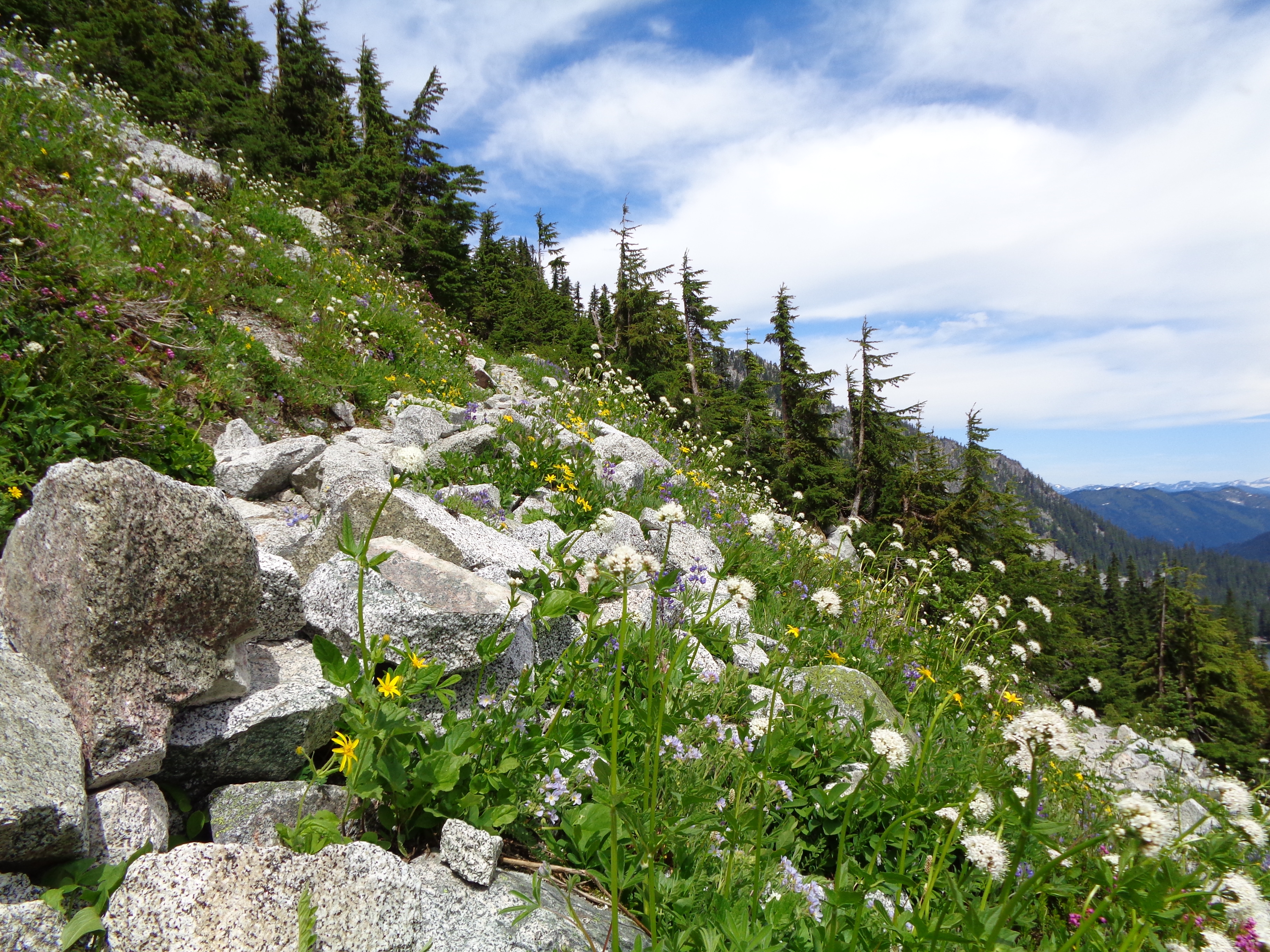 Wildflowers line the trail in the Alpine Lakes Wilderness.

Cockblock Moses: To avoid the crowds of a stereotypical NOBO hike. Also, because it’s generally noted that going SOBO on the PCT (and all the other trails) is harder.

All Day Err Day: Seemed like a good idea with so many people hiking NOBO these days.

Badger: There were two primary factors that led to my decision to hike southbound.  First, last year saw near-record snow throughout the Sierra. Hiking northbound would’ve meant confronting highly challenging, dangerous conditions, when there was a very feasible alternative (SOBO).  Also, I wanted a thru-hike that presented more solitude than the traditional northbound experience presented. 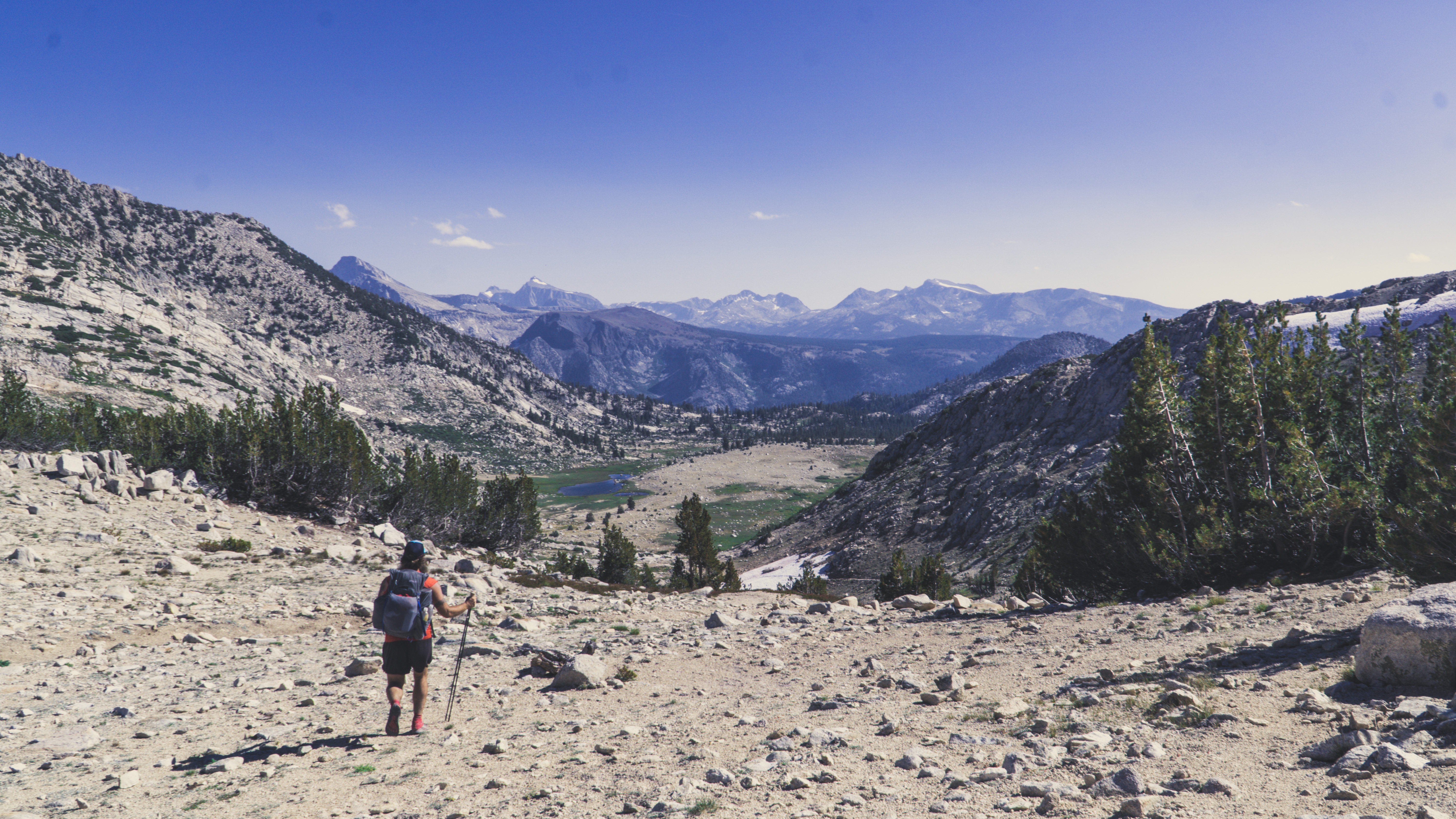 SOBOs experience the Sierra essentially snow-free, even in such a heavy year as 2017. (Photo from Badger)

How did you get to the Canadian border?

Unlike the Southern Terminus, which is accessible by car, Monument 78 is a bit of a challenge to get to. As it is illegal to enter the US by the eight-mile hike from Manning Park (where NOBOs usually exit), SOBOs face the decision between a more than 30-mile approach hike, or skipping the trip to the border altogether.

Righteous: I took a route that I hadn’t heard about in any of my research. I’m so glad I found it, and I highly recommend it. About halfway on the road between Mazama and Hart’s Pass, the Robinson Creek Trail begins. You walk through the heart of the impressive Pasayten Wilderness, crossing two tall passes. I forded the namesake river several times. After about 25 miles, this route joins the PCT at Castle Pass, just about three miles south of the border. Minimal backtracking, and you parallel the PCT but at lower elevation, making this a great early-season option.

If you want more detailed information on this approach, comment or message me on Instagram. Be warned: Trail junctions on this route are unsigned. I’d recommend careful study of the route beforehand and a solid sense of direction. (Thanks to the Cascades Outdoor Store for giving me the route.) 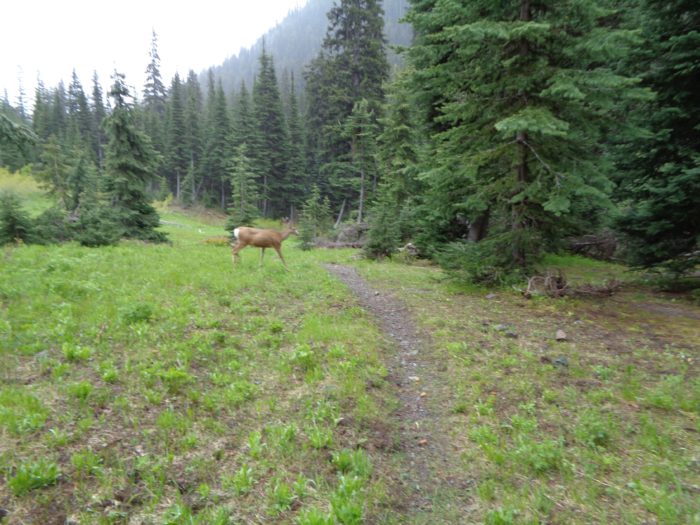 Find me a NOBO who saw a huge deer on their first day. I dare ya.

Smurf: I did the extra 30 miles from Hart’s Pass to the border and back. It was so beautiful; it was totally worth it.

Cockblock Moses: Started at Hart’s Pass. A friend I met on Instagram had family in Wenatchee so I started with her. 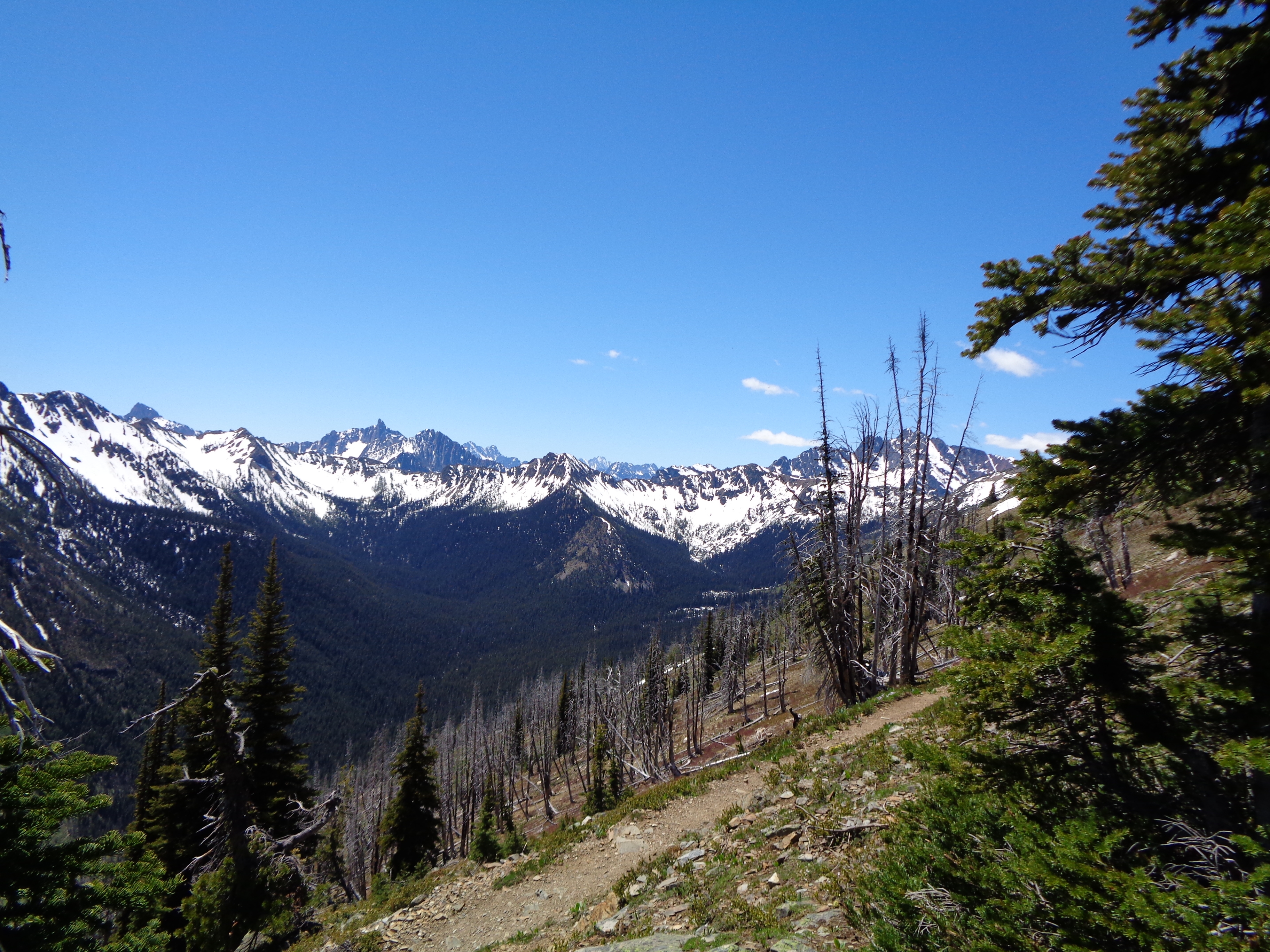 The view from near Hart’s Pass. Not a terrible way to start a thru-hike.

All Day Err Day: I drove to Hart’s Pass with my dad and sister and then hiked north.

Righteous: Very tough question. The gradual climb through the Sierra, the passes getting higher and higher before the coup de grace of summiting Whitney? No obstructed views in Washington? Not completely roasting to death on the Aqueduct? Getting to talk with most of the NOBOs is fun. You get such a diverse perspective of the trail, and usually loads of helpful information. Stuff like hiker services in town, availability of water, “this climb is going to end you,” etc. 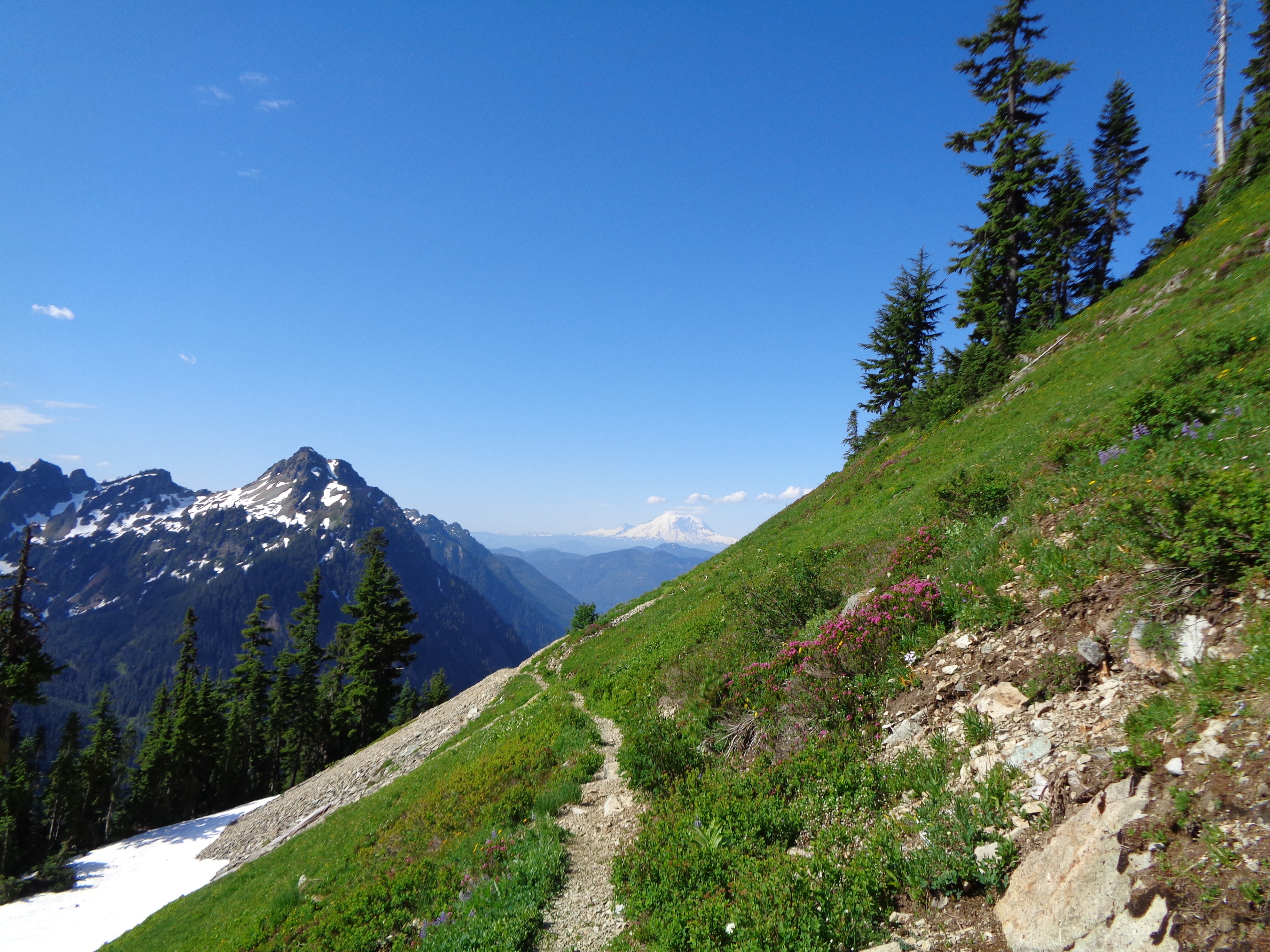 Final answer: Views like this every freaking day in Washington.

Smurf: SOBOs get so much more trail love. I’m not talking about trail magic, that’s actually much less than NOBOs get, but more the general love from the hiking communities you pass through. SOBO is a much smaller, driven, dedicated community than the NOBO herd and all the trail angels we met always brightened up when they realized we were SOBO. 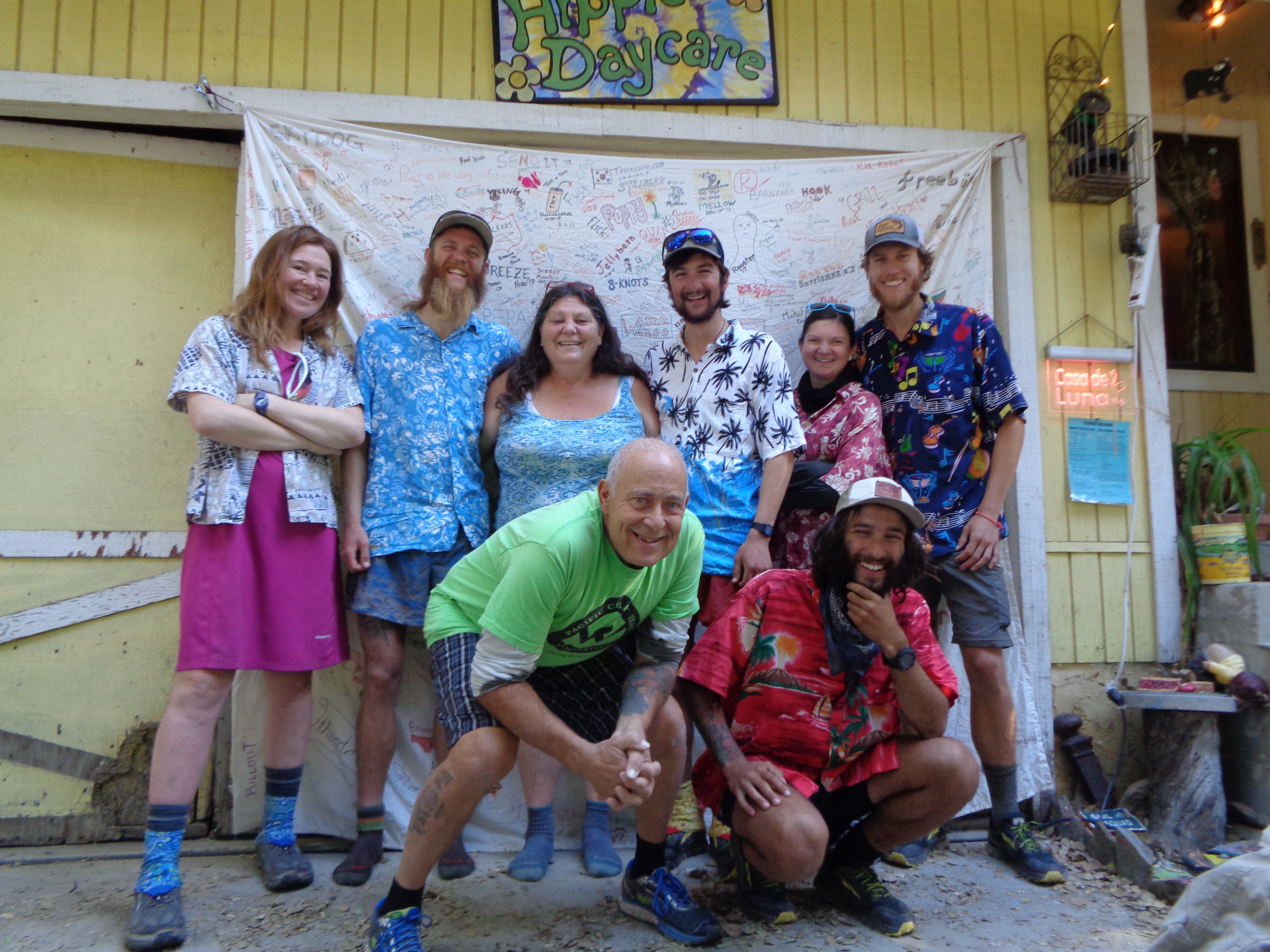 Kirby: All of the amazing people you meet and  hike with. You meet most of the northbounders when you cross paths and can trade important info and stories.

Per Bear: Washington and the Sierra. Washington is beautiful and I’m glad I saw it in sunshine and not rain. The Sierra, as mentioned, kept getting better and better as the passes got higher the farther south you went. You also don’t have to walk in a group of people. You can go days without seeing anyone other than the ones you walk with. 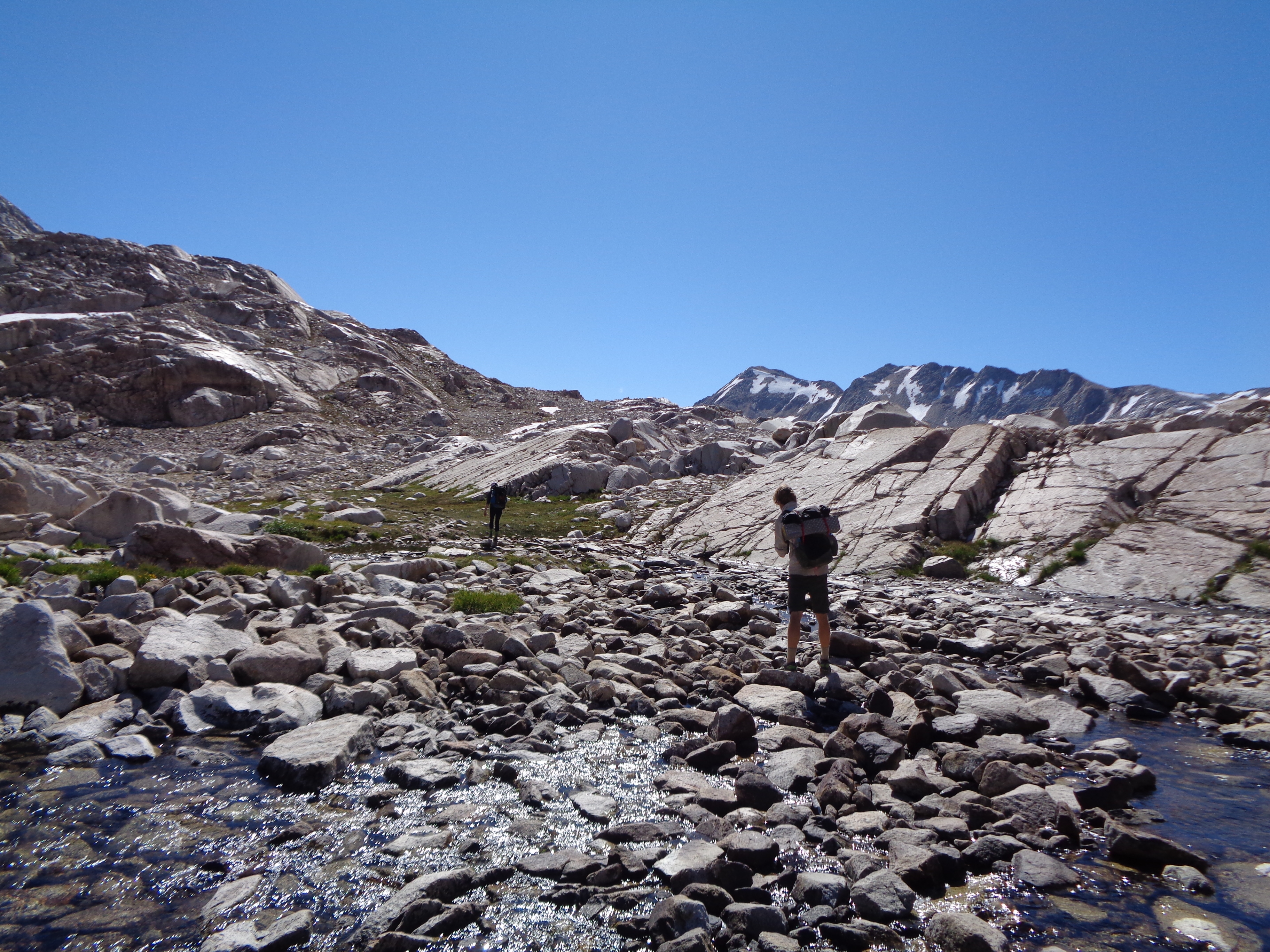 SOBOs’ epic approach to the epic epicness of Muir Pass.

Cockblock Moses: Having solitude. When I look at pictures of NOBOs and see groups of 30 people regularly it kinda puts me off. I never even met 20 SOBOs on my hike if I had a good guess. It was still a solitude experience even if I spent the whole hike with somebody else (we didn’t talk every day and wouldn’t hike together; just camped together, really).

The other thing I loved was the great weather in Washington and cooler days in the desert.

All Day Err Day: Seeing the North Cascades in all their glory and the SOBO community is pretty tight-knit.

Badger: Hiking through the Sierra in September.  The weather was amazing, the water crossings were a nonissue, and there were no bugs.