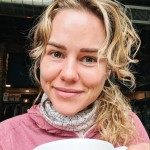 The Bridge of the Gods: Washington Baby!

I get the bus from Portland to Timberline Lodge to rejoin the PCT and hike the last 50 miles of the trail that runs through Oregon. Timberline Lodge is one of the most iconic stops on the PCT, famous for its buffet meals and the beautiful lodge that houses it. Because I just ate my way through Portland, I wasn’t planning on eating there, but I did want to see inside the lodge. I walk into a room that looks like a chapel. It is full of hikers lounging in old fashioned wooden chairs and charging their shit. I round a pillar and suddenly I am face to face with Steve, a woman I hiked with for the first 350 miles of the PCT.

She tells me Tony will be there shortly too. Steve doesn’t tell her that I’ve turned up at the lodge and when Tony walks in and sees me she squeals and waves. The constant losses and reunions of the trail are a strange thing. The three of us started our hike on the same day (April 5th) and had stayed together until I had to get off trail with tendonitis around the 350 mile mark. We hit the buffet and I eat several helpings of watermelon salad and drink cold water from a real glass. A. Real. Glass.

We hike out together in the afternoon and the change of scenery is refreshing. There are patches of snow, tall pine trees, views of Mt. Hood, wildflowers and seven million hikers. The trail is super crowded from here to mid-Washington as everyone skips up around the fires that cover NorCal and most of Oregon.

We see so many people we haven’t seen since the desert and it’s like a high school reunion.

When we set up our tents for the night I am thrilled to see Steve and Tony’s familiar tents again, clustered with mine in a little circle in the woods. Most people are slowing down a little for the final stretch.

Skipping so many miles for fires means we have more time for the last 500ish miles before our various deadlines and planned end dates. Now we have time to eat and chat together at camp and for several nights our trail bubble enjoys long evenings together, trading food and drinking hot chocolate from ziploc bags.

We take the Eagle Creek alternate into Cascade Locks. Tunnel Falls is as lovely as I could have expected and it’s magical to walk through the cave with it’s damp, softly-lit green walls, the cool spray of water and the thunder of water cascading down the rock face. It’s a landmark on the PCT, maybe the most recognisable one of all.

If you’ve hiked a continuous footpath from the Mexican border, crossing into Washington is entering the final stretch – the last 500(ish) miles of a 2650m trail.

That is not the case for most hikers this year, many of whom skipped all of Oregon and parts of NorCal straight up to the Washington Border.

For me, it marks what will likely be the longest continuous stretch I get to hike of the whole trail. So far I’ve hiked 450 miles of the 700 mile SoCal desert, half of the Sierra, most of NorCal where I skipped two sections for past and present fires, 140 miles of the Oregon Coast Trail followed by 50 miles of the Oregon PCT. If I finish at the Canadian Border I will only have hiked 1750 miles (maybe? I’m so tired of mile math). It’s barely two thirds of the trail.

So, Washington. And the Bridge of the Gods.

If you’re not a PCT hiker and you’ve heard of the Bridge of the Gods, it’s probably because you’ve seen or read Wild. I read Wild when I was 25, and I’ve wanted to hike the PCT ever since. This is not usually what I say when people ask me why I decided to do this. Most hikers, especially men, love to shit on Wild and Cheryl Strayed. ‘She didn’t even hike the whole PCT.’

No shit dickhead, if you’d read the book you’d know she never set out to hike the whole PCT. She also didn’t intend to hike as far as the Washington border, but the Bridge of the Gods is where she ended up.

I love Cheryl Strayed. She’s one of my favorite writers. Her book Tiny Beautiful Things is one of the most wonderful, beautiful, human pieces of writing that exists, and reading it was the first time I realised the true power and art of writing and of stories.

She’s also just a fucking badarse and I love her.

My PCT hike has not turned out like I expected. And neither did hers. Neither of us ended up with the path we expected.

I felt close to her story when I crossed the Bridge of the Gods, with women who’ve become important to me in the last few months. And that felt good. 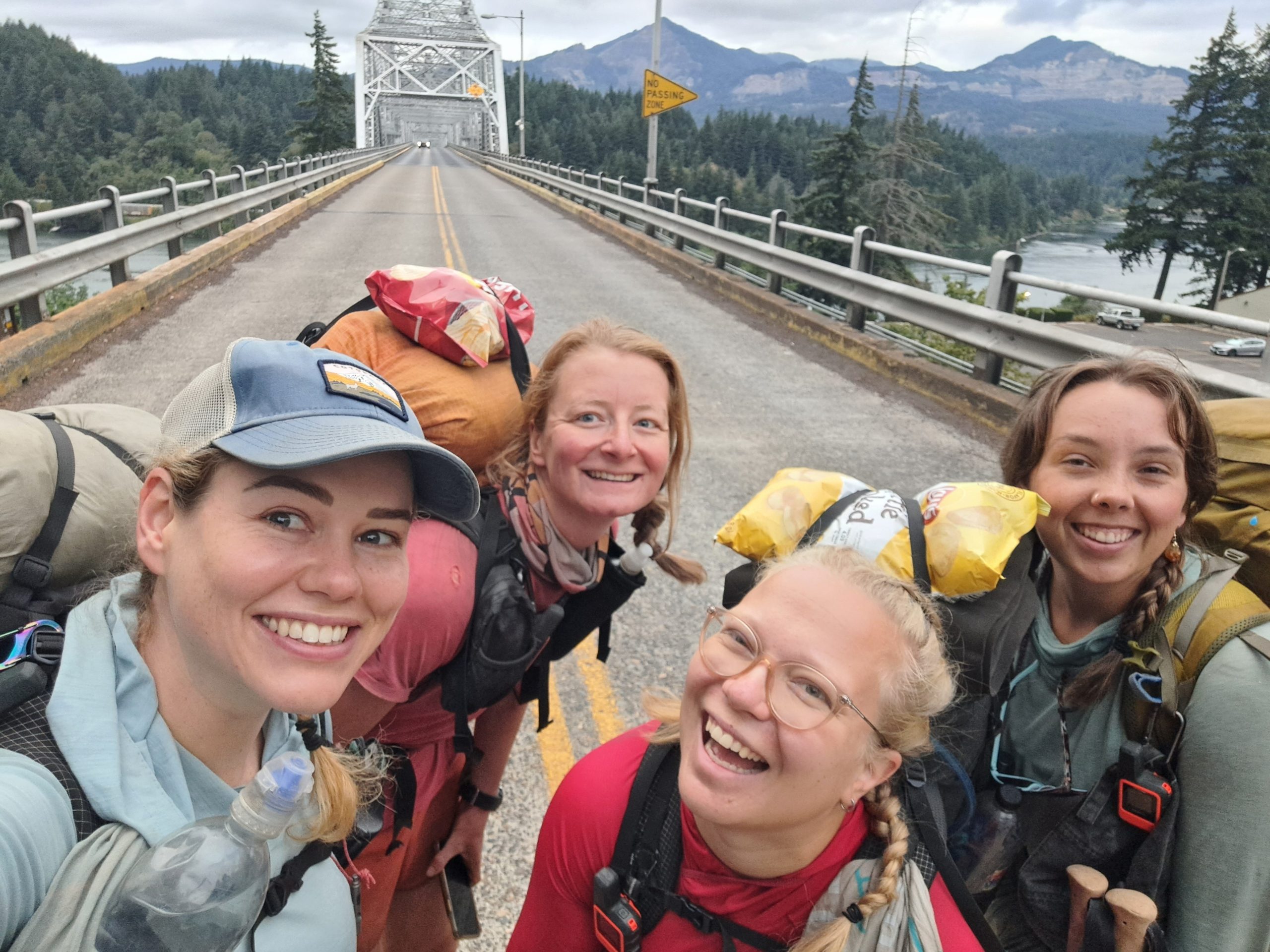 The day after we cross into Washington is one of my favorite days on trail so far. I’m finding it hard to get up early at the moment and I’m the last one to leave camp. The day starts with a long climb.

Everyone is so strong now.

In Washington, even though we’ve slowed to 20-ish mile (32km) days, we’re ascending (and then descending) an average of 5500 feet (1.67km) each day. It never feels easier but we’re moving so much faster now.

When I got back on trail in the Sierra, I could only move uphill at around 1-1.5 miles an hour with frequent breaks. Now, though the others are faster than me, I can climb steadily for hours at a time, covering 2.5 miles an hour even when the trail is steep.

Feeling it pounding away steadily, I picture my heart growing in size, the muscle thickening with use.

I fucked up my resupply for this stretch and I only have three days of food instead of four. So I’m rationing, and I’m ravenous. I keep stopping to pick the berries by the trail. Another hiker has shown me huckleberries, thimbleberries, salmonberries and wild blueberries as well as the blackberries I already know well. As I start downhill a southbound hiker passes me and tells me there is trail magic serving breakfast just 1.5 miles ahead. I pick up my pace. After a few minutes, I stop, tighten my pack straps, grasp my poles in one hand and start to jog. It is not 1.5 miles, it is 4 miles, and I cover that distance in an hour.

I make it to the trail magic just in time to get the last grilled cheese.

It is made with thin, sweet American bread and thick, orange salty cheese. I scarf down chips and a PBR with it. Shortly afterwards I grab a seltzer and skull half of it before I realise it’s hard seltzer. I’m a little woozy hiking out. The trail is soft and flat and full of green light that washes down between the tall trees. We all stop to swim in a river. It’s hot and humid and the cold water is incredible. On the way out, two day hikers with a very small baby say hello and ask me how many miles I’ve hiked. I briefly try to calculate before saying I have no fucking idea. 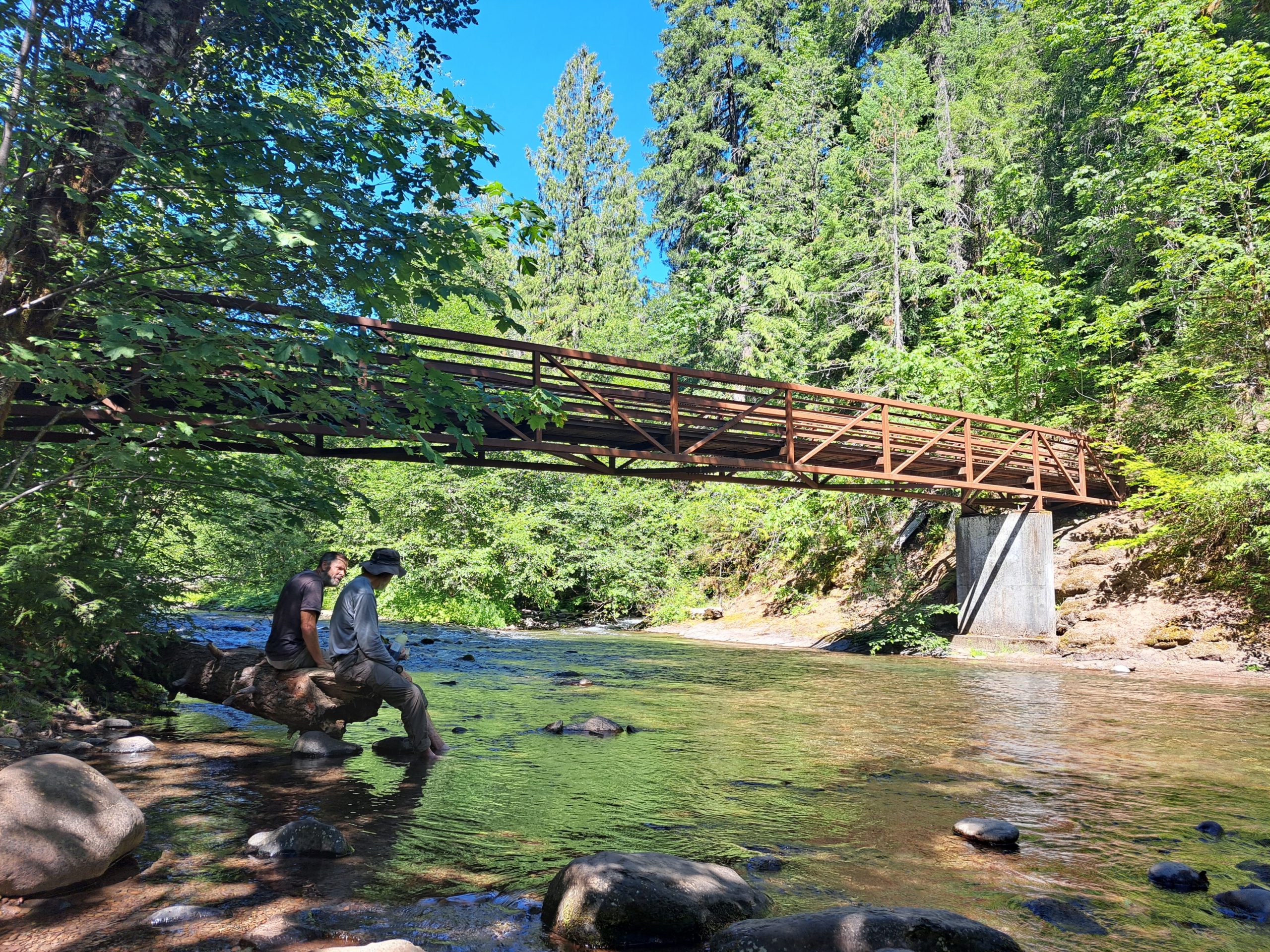