So to start off we want to give you a little bit of an idea of what the Sierra are like this year. This is the fourth-largest snow year on record. 2017 was a really big snow year and we’ve actually got 25% more snow this year. It’s mid-July and Mammoth Ski Resort still has slopes open for the season! The snowpack was measured at 188% of the average near Lake Tahoe. All the numbers are crazy to read. And then you get out into the thick of it and see how much snow is left and it’s utterly amazing. 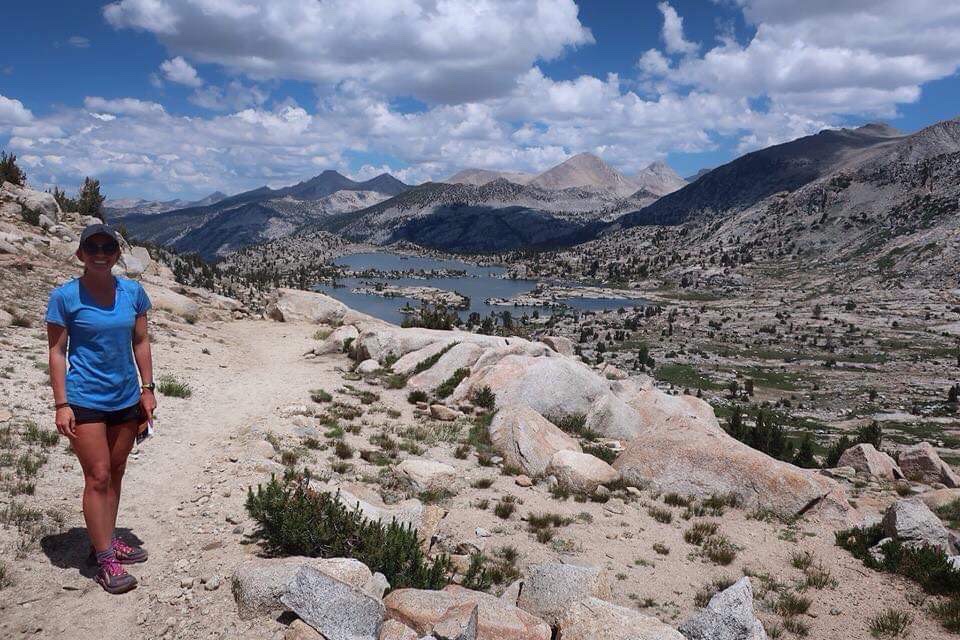 I will provide photos from last year to this year to compare a very normal year in 2018 to a very high snow year in 2019. 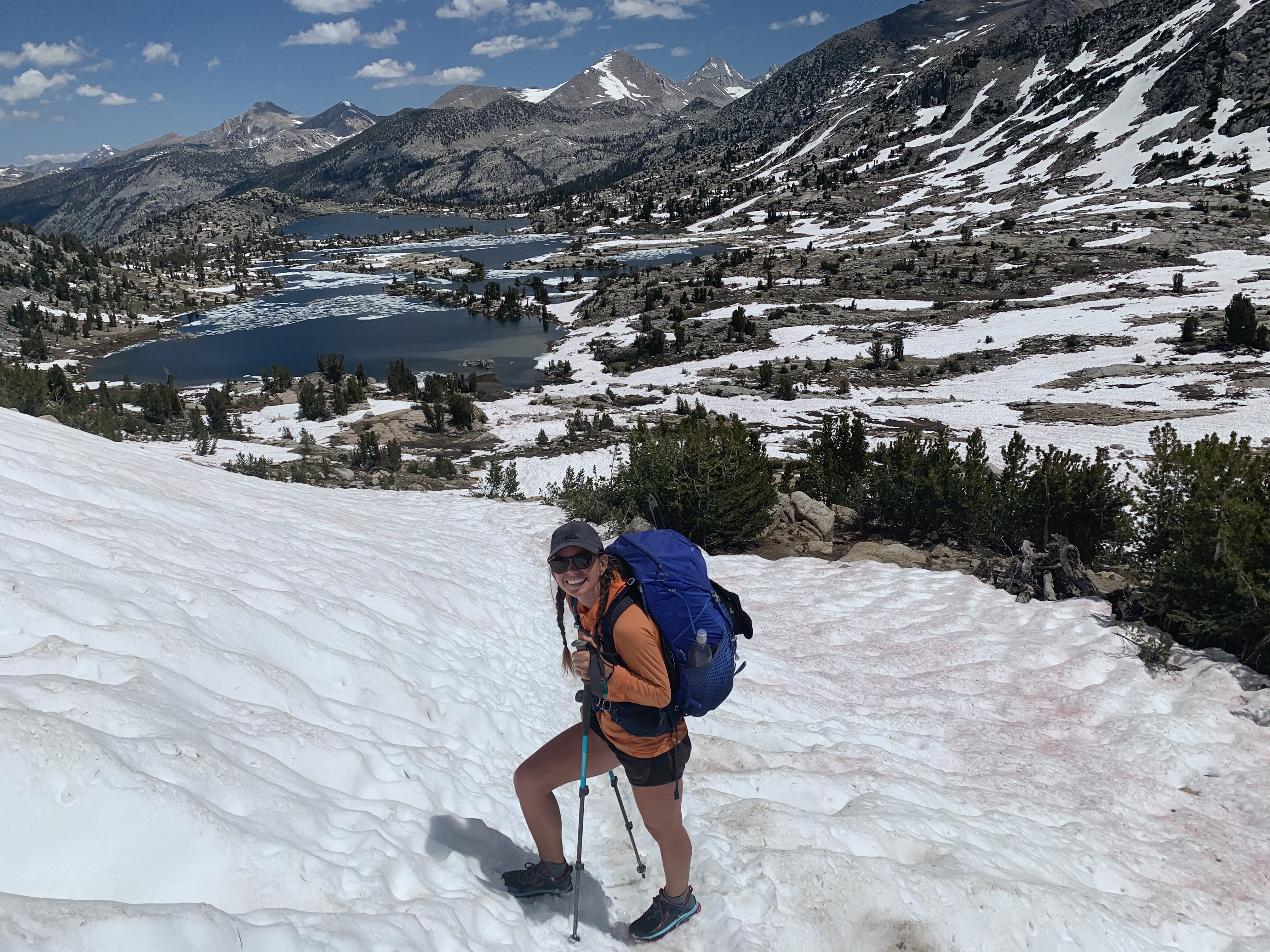 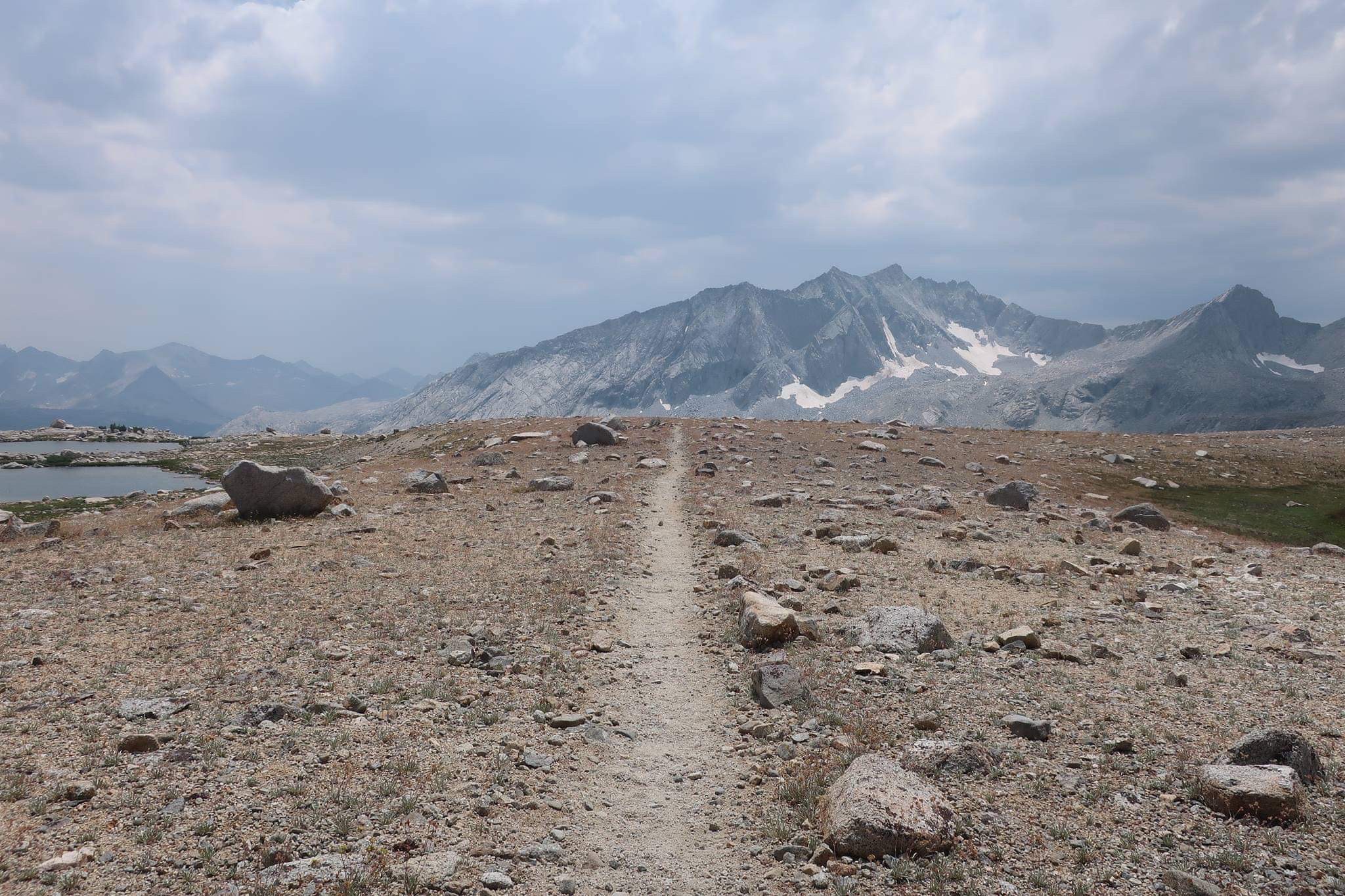 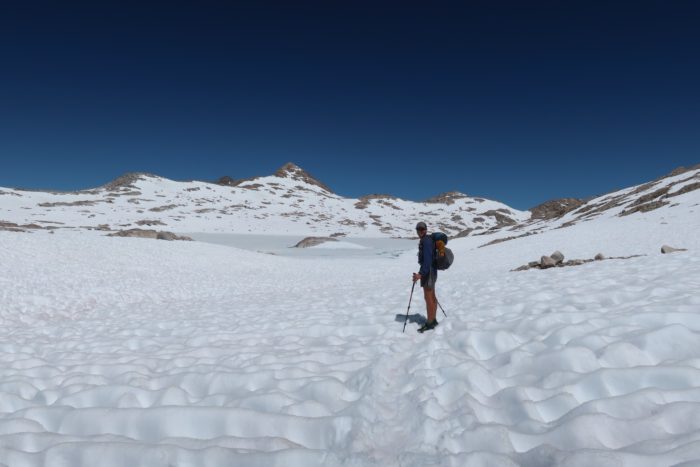 Anyway, hopefully now you have a better picture of how different this year is from a normal year in the Sierra Nevada mountain range. Not only is there a boat-load of snow, but all the snowmelt has caused very high water levels in all of the stream and river crossings as well. Danger around every corner, such fun!!

Our very first pass! Forester Pass sits at 13,124 feet and is the tallest pass that we will do through the Sierra’s. We hiked from Mount Whitney back to the PCT and then hiked another 11.3 miles to get to the base of Forester Pass. This would mean we would only have two miles to summit in the morning. 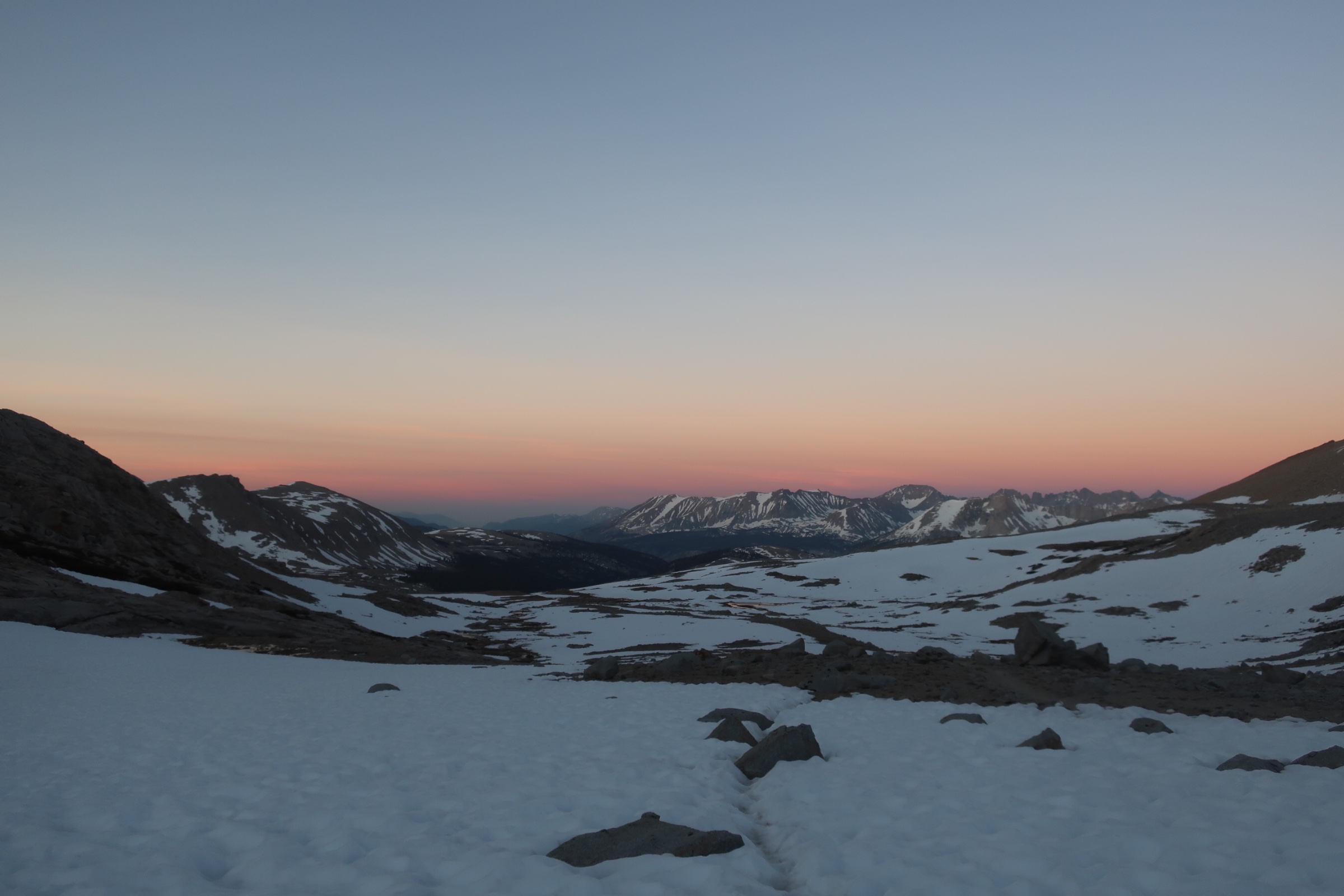 Sun beginning to color the sky. 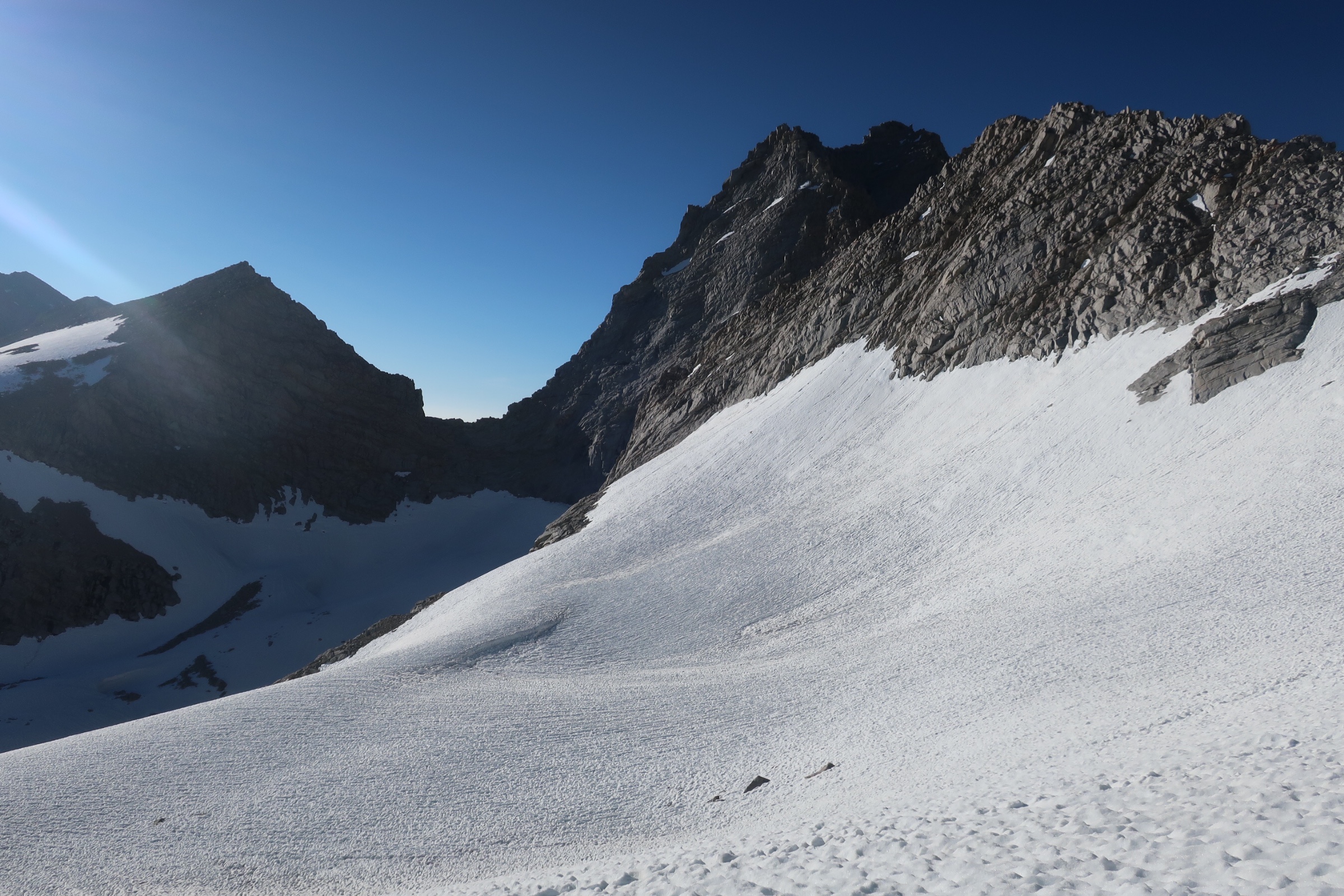 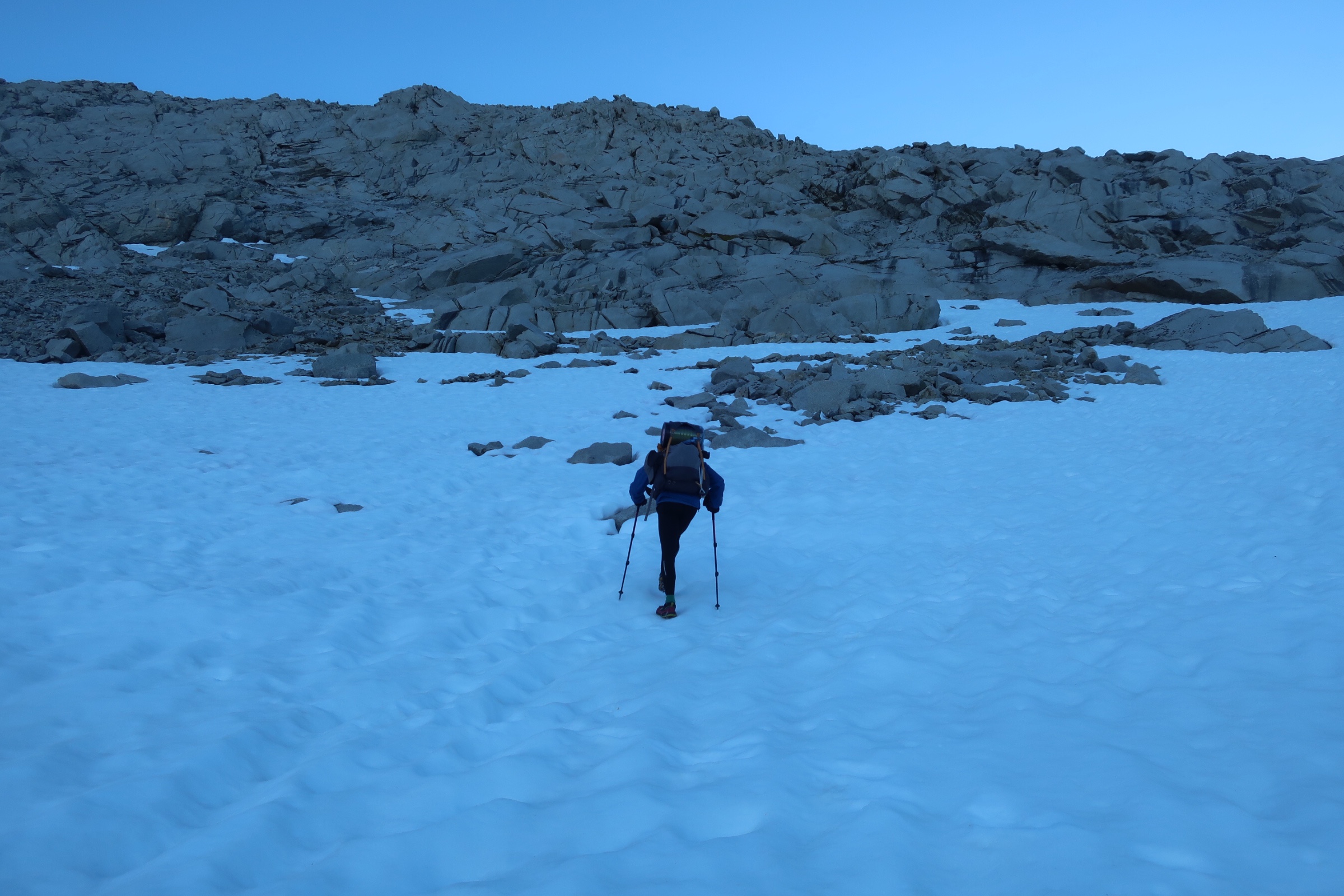 Heading straight up to find the snow-free switchbacks.

This pass was supposed to be a doozy, but we set ourselves up nicely by camping so nearby and by waking up nice and early while the snow was still hard packed and crunchy. The two miles to the top only took about an hour and a half so we were pleased (much slower than our usual hiking pace but pretty good for all the snow). 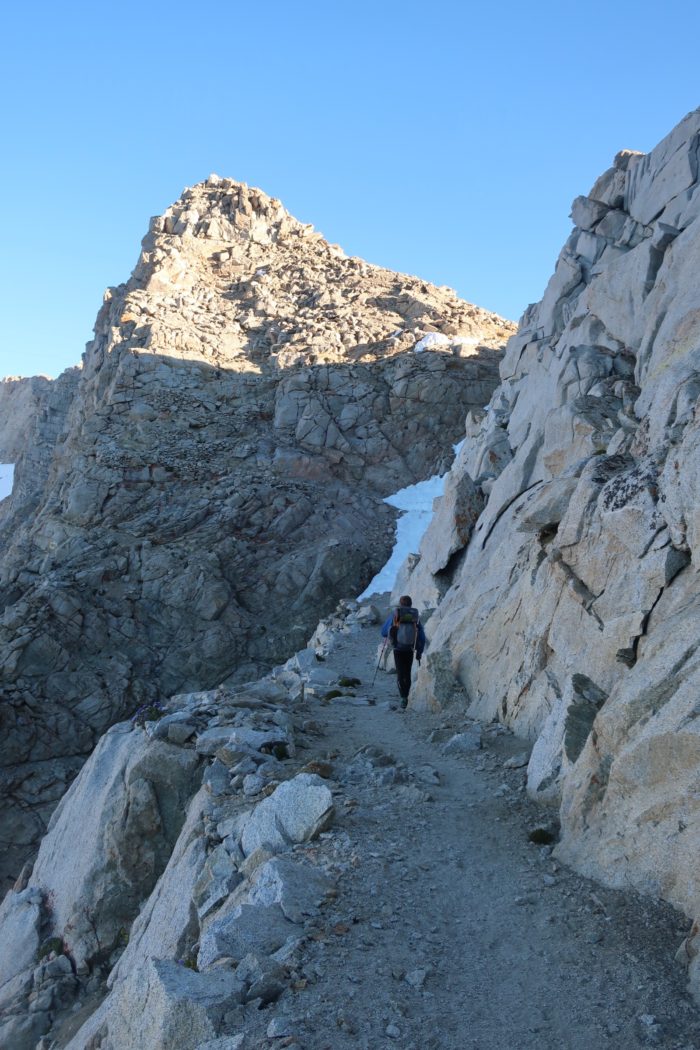 Into the last few switchbacks free of snow.

There were a few switchbacks visible but no real discernible way to get to them. We problem solved and hiked straight up the face to one of the switchbacks. We had on our Microspikes and used trekking poles rather than the ice axes this time. We were breathing heavily but made it and were able to stay on trail for the majority of the way up from that point.

The last sketchy part of the way up was hiking through a horseshoe shaped shoot of snow. It was only 10-15 feet long but was pretty slick and if you were to misstep you would be sliding for a long way until crashing into boulders. We survived this portion as well and scooted right up to the top! 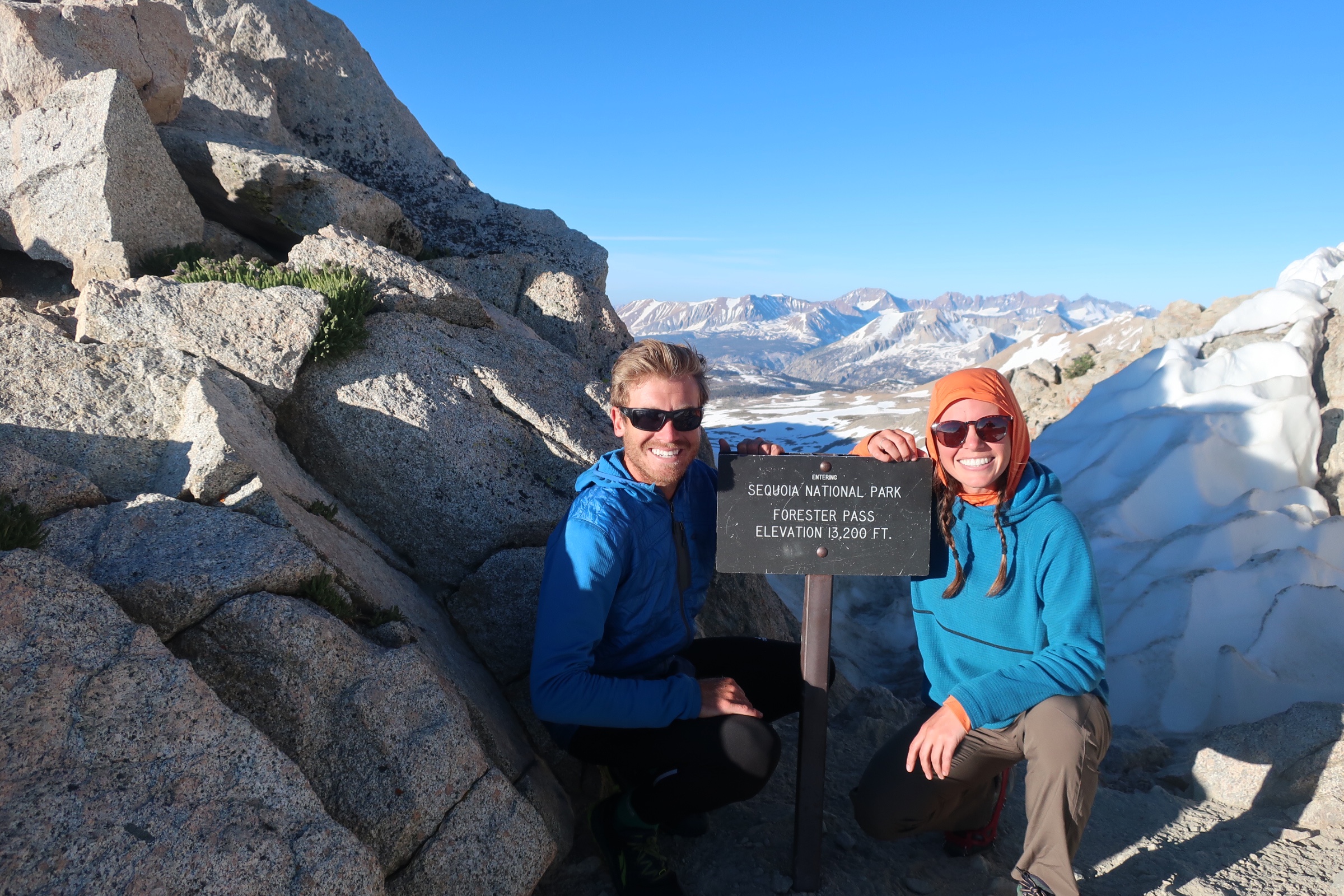 The descent was pretty neat; there was a trail carved out across to the spiny ridge of the mountain that was free of snow. 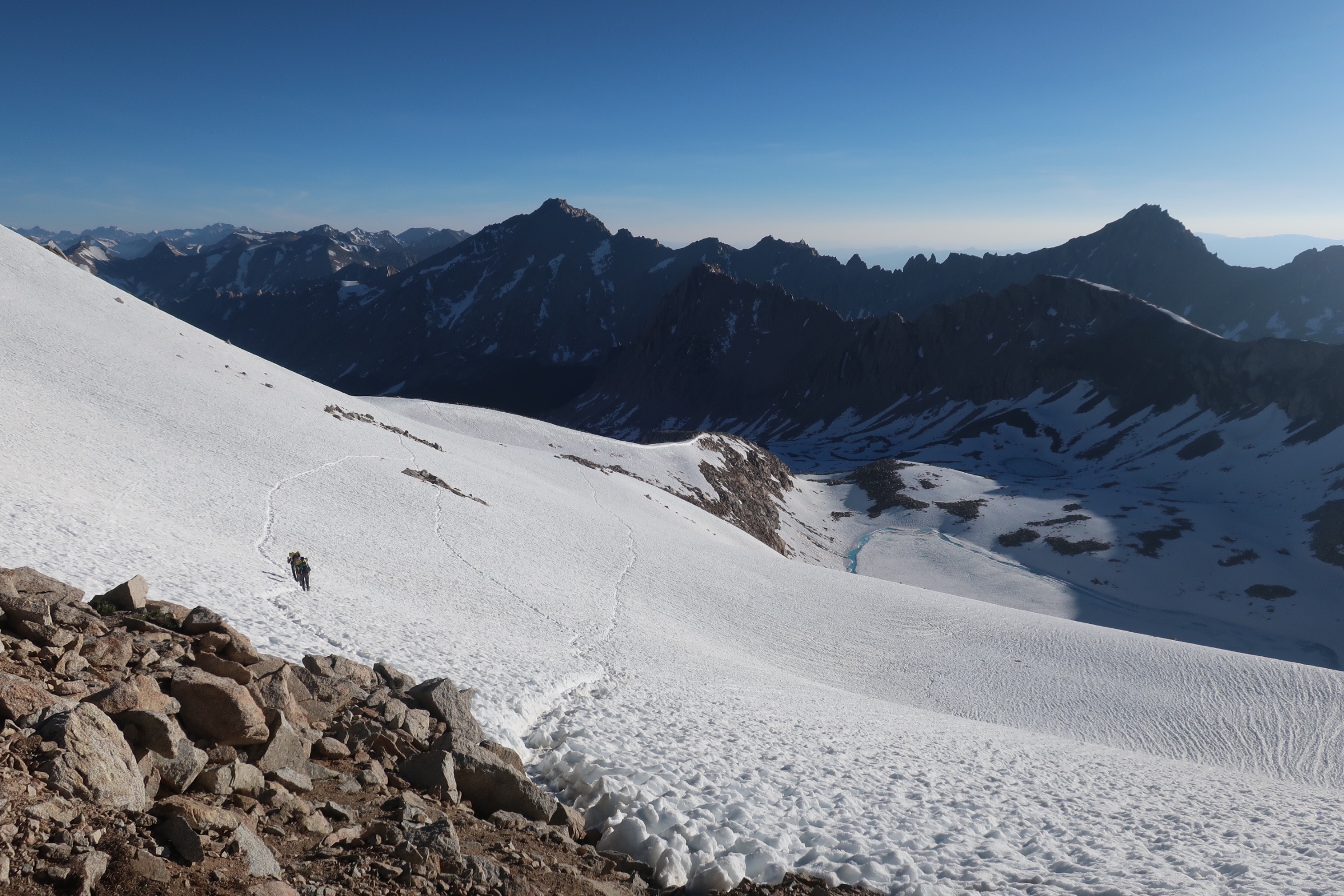 You can see three different routes to choose from. 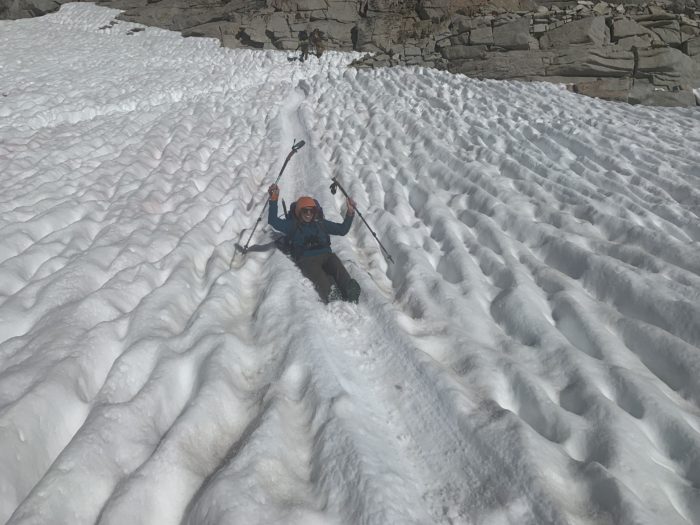 We got to it and then climbed down the boulders on the spine until we got back to more snow and our first glissade! (A glissade is really just sledding on your bum down the mountain.)

The descent took a while and we got lost quite a few times. Before we knew it, though, we were back down into dry and snow-free terrain ambling through the pines. 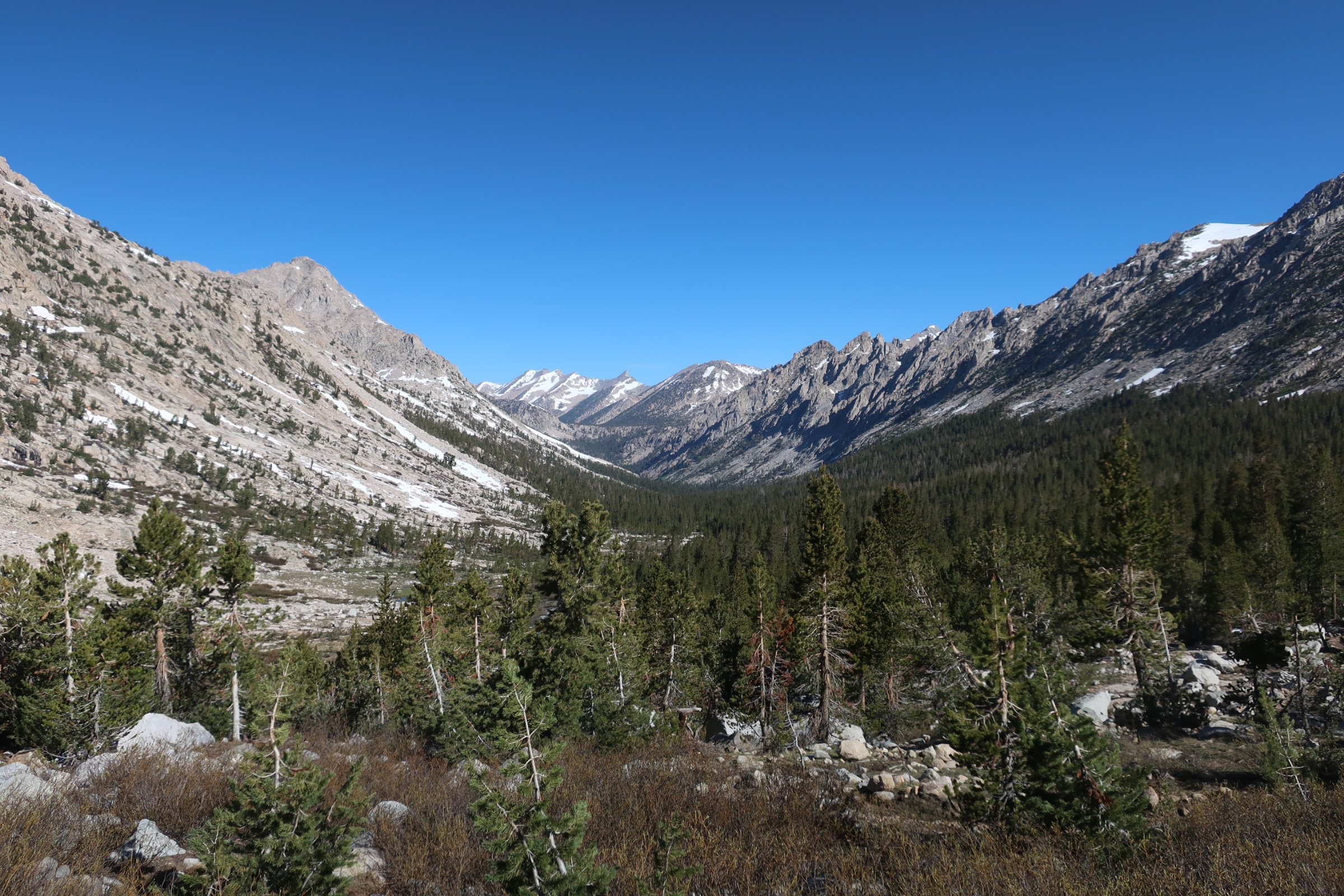 Kearsarge is not actually on the PCT but it is an offshoot to get into one of three towns: Lone Pine, Independence, or Bishop. It’s a 7.5 mile hike one way and you start by going over the pass at 11,760 feet, and end way below at the Onion Valley Trailhead parking lot. We did this hike on the same day as Forester Pass as we were both on our last two snacks with no other food in our bear vaults. Also, I had my new pair of shoes waiting for me in Independence! (Or so we thought.) 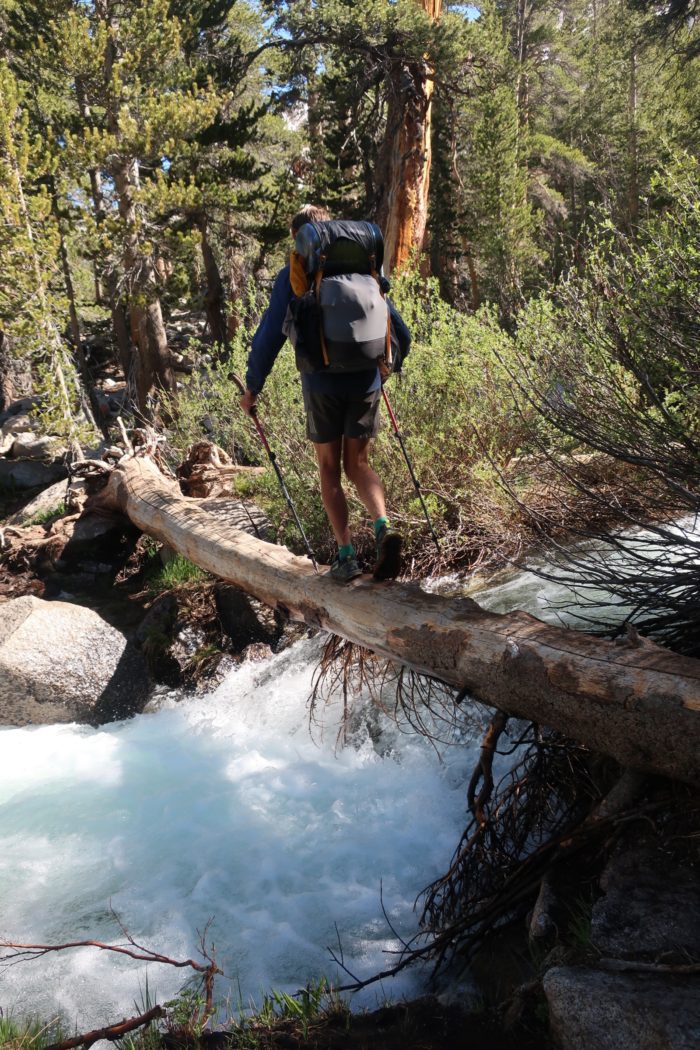 One of the many crossings of the day.

After trekking through the mud, mosquito ridden low lands, and crossing rushing water we hit the start of our ascent to Bullfrog Lake. This was probably the hardest part of our journey over Kearsarge Pass. We had food and showers on our minds so the motivation was plentiful. 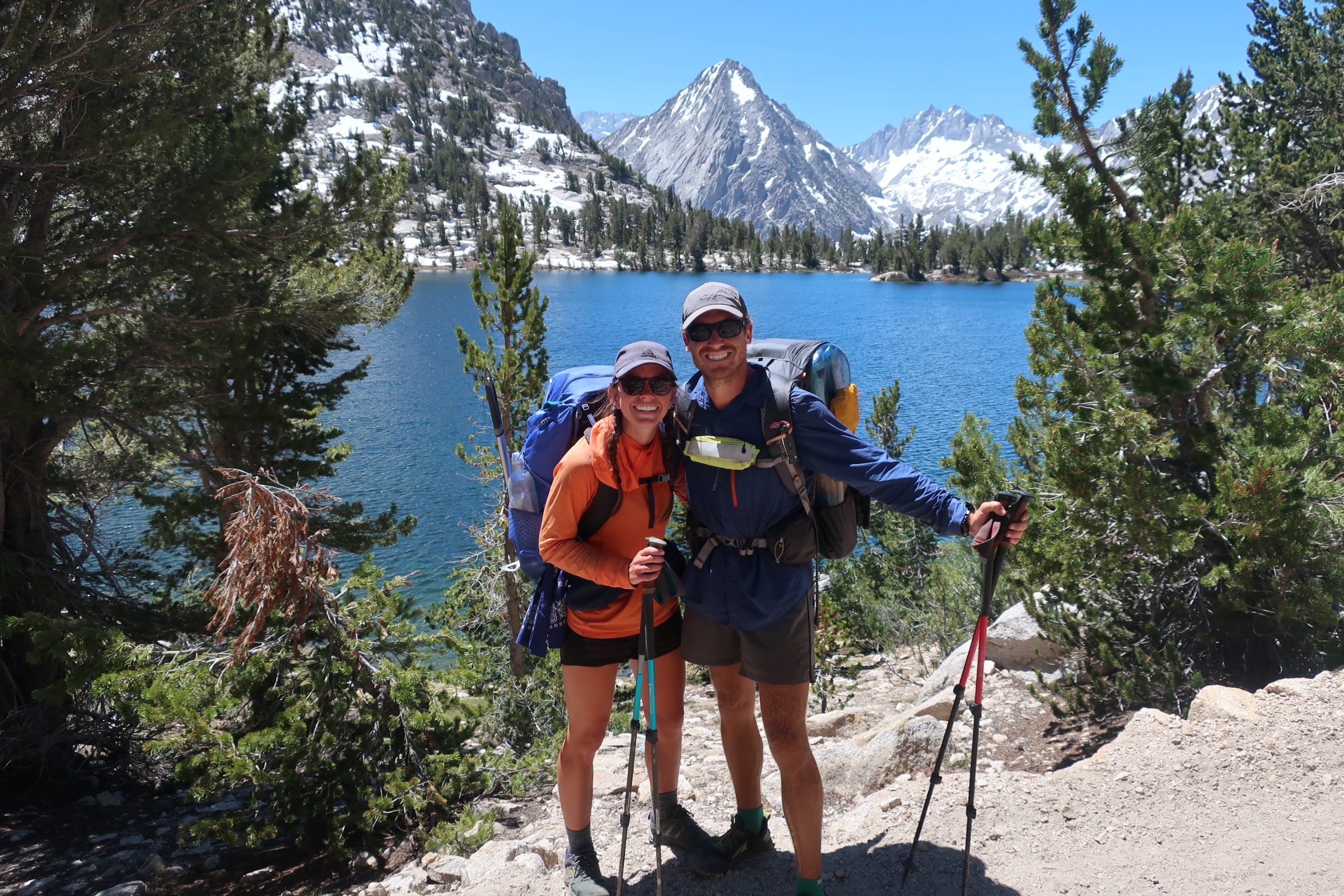 After reaching the summit we stopped to chat with some new friends and a couple of locals hoping to gain some information on the surrounding towns. We continued down the beaten path passing several lakes on our descent. All looked like great places to hang out but we had food on our minds so town was our priority. We reached the parking lot and sat in what little shade we could find hoping some day hikers would give us a ride. After learning that Kelsey’s box had been sent home to Kentucky instead of Independence we were pretty much down to go to whatever town the driver picked. A young couple from Bishop took us under their wing and drove us the 40 some odd miles to Bishop and happily dropped us off at the brewery. It was delicious so we gorged ourselves as we looked for a place to rest our heads for the night. 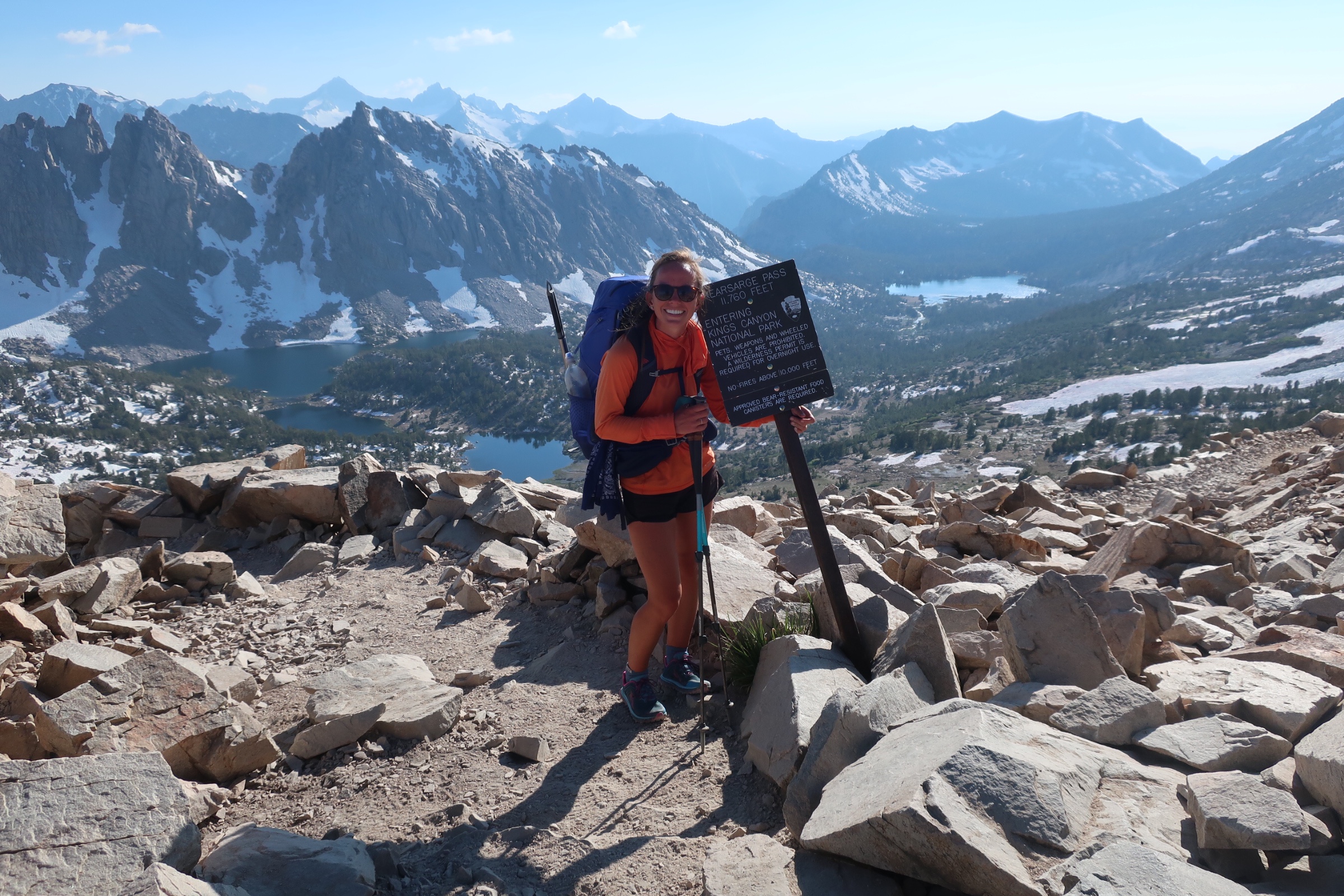 That place would be Hostel California in Bishop. They even had loner bikes with baskets on the back that you could ride to the grocery store. We were able to do laundry around the corner, eat an awesome breakfast and layout our resupply on the massive dining room table. It was there that we met our friend Rick who agreed to give us a ride back to the trail head. He was in the area to do some climbing and figured it’d be good karma to take a few hikers back to trail. Thanks Rick!!! 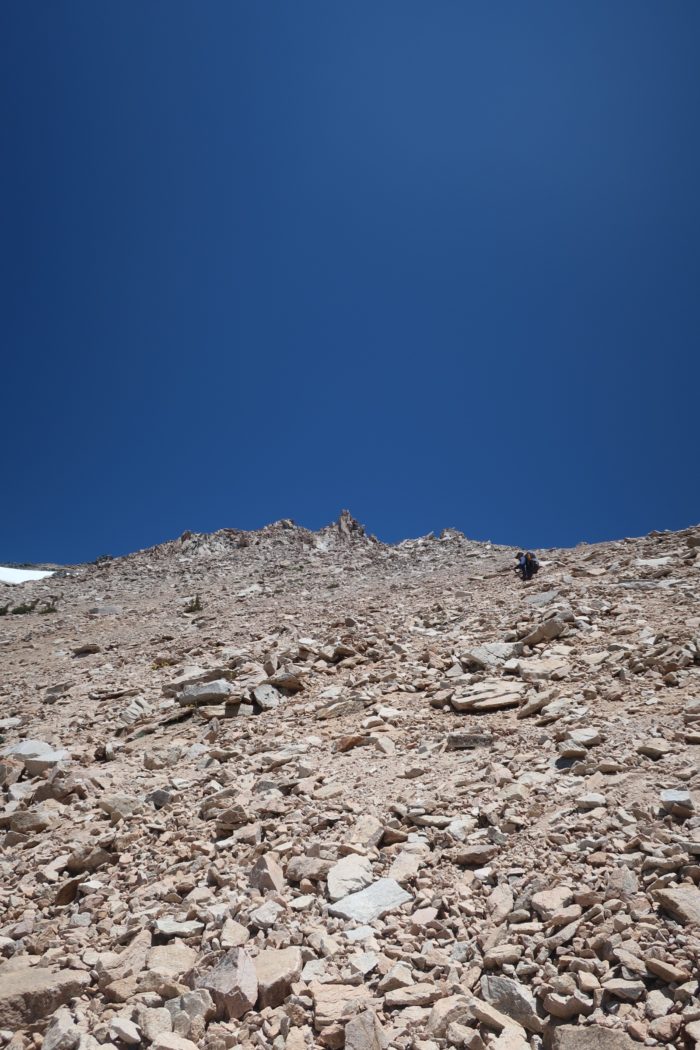 Cody on his way up.