Reflecting on Backpacking the Monadnock-Sunapee Greenway

In late April I made the impromptu decision to set off on a two-night backpacking trip on my own. This decision was based on the fact that I’m planning on thru-hiking the Long Trail this summer and wanted to get some true backpacking experience under my belt. I chose the Monadnock-Sunapee Greenway trail, located in South-western New Hampshire, for this trip. The trail runs from the summit of Mount Monadnock to the summit of Mount Sunapee. After completing this trip, I published a trail report; however, I’ve waited to publish my reflection on what this trip meant to me until now. The following reflection on this mini thru-hike will take you through the emotions I felt and what the experience meant to me on a much more personal level. 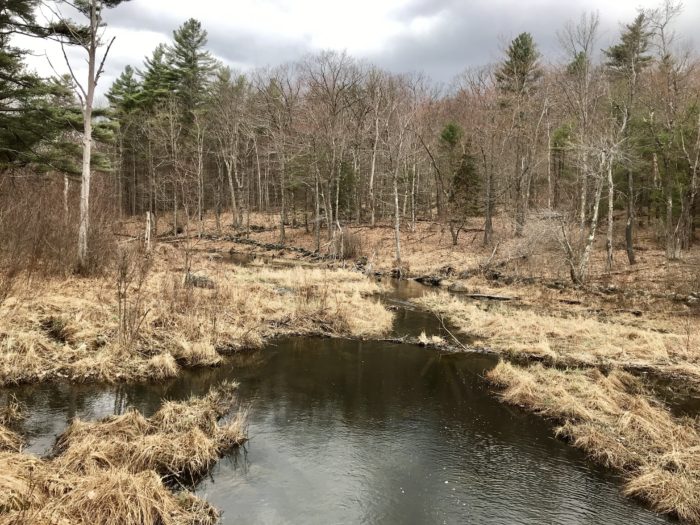 The first two miles up Mount Monadnock were like any other with the exception of the added weight of a 20-pound pack. Cloudy skies and a cool spring breeze kept the bugs at bay, and with every step I ascended a mountain familiar under foot. Emerging from the trees onto the bald, rock slab that leads to the Southern Terminus of the Monadnock-Sunapee Greenway, I was greeted by a swift wind and enveloped in low-lying clouds. I shrugged on my raincoat, swallowed a Snickers bar, and hefted my pack back onto my shoulders. This was the day, the conditions were perfect, and the summit was the beginning of a journey I’d put off for years.

The summit marker, embedded in the granite, marked the beginning and the end. I stood there, feet planted, bracing against the wind, the rain pelting my cheeks, as a smile curled on my lips. Deep breath in, a pivot to the right, and I set off down the trail. This was the beginning of a journey that would show me how far I could go and how far I had come.

Down into the forest I descended. I wrapped myself in the trees that lined the path north. Winding and wet, my feet floated over rock and root, as though they were doing what they were meant to. Wandering thoughts filled my mind, as they do, like they always do when I’m on the trail. But time began dragging, as miles weren’t adding up as fast as I’d like them to. The sun emerged above me, burning off the clouds from the morning, and I broke from the forest onto endless dirt roads. 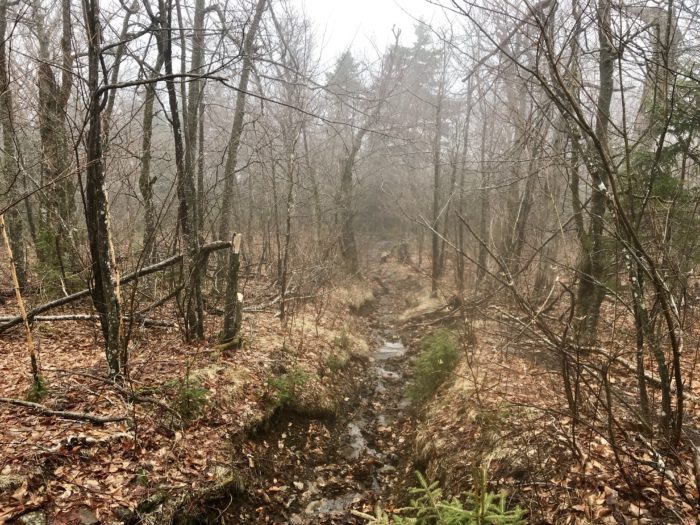 By afternoon, the pain started. A familiar aching in my right foot, a reminder of tendons that have borne the weight of many miles over dozens of years. A burden I’ve carried and a companion of sorts. With each step the pain mixed with the moisture that seeped up through the ground into my shoes. Mud and water forced their way into the soles of my feet, between my toes, and offered minor relief from the pain. The path leading to my home for the night appeared and a day filled with miles of walking were replaced by a night alone in the wilderness.

The peepers in the nearby swamp filled my ears as I hobbled down the trail to the shelter. This was the moment, this was when it all began. The journey from day hiker to thru-hiker, from Rebecca to Socked In. In my mind lay a mixture of fear and exhilaration all stirred together with the wings of the butterflies that nestled in my stomach. Everything came together perfectly. My hands worked as though they had set up camp dozens of times before. And within an hour, my meal rested in my belly, and I was wrapped in my quilt like a chrysalis.

A jolting awoke me and my brain worked quickly to establish where I was. I peeled open my eyes and strained to make out a shape in the darkness; anything that could generate a familiar memory. Nothing. But then, wait, was that rain? I let out the breath I had been holding and with it the panic and fear dissolved. It’s only the rain. I’ve become familiar with the rain, gentle or stinging, it’s all the same to me now. And within minutes I drifted back to sleep. 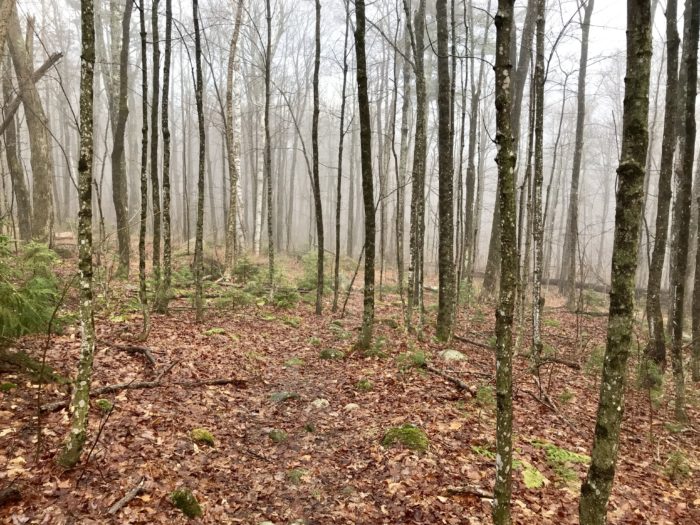 At daybreak, I emerged from my quilt, welcoming the morning and with it the sunshine. Camp packed up fast and I was surprisingly unsore. My muscles stretched quickly as I ascended the hill out of camp and the miles racked up. By midday, hunger mixed with soreness and once again I was reminded of the pain that lived in my shoes. It had made nests in both shoes now, interlacing itself around my toes and tendons. It made a beautifully crafted home of branches and feathers that housed two birds whose songs were silent screaming.

It was then, when I decided to push on and not turn around, despite the pain, in spite of the pain and fear, when I changed. That was when I emerged from my chrysalis as Socked In. As I rounded the bend and ascended the mountain, stepping on and up through the pain, that was when I knew strength. That I could be in such immense agony and yet continue to go forward. With every step I broke through barriers that lay in front of me; barriers built out of all the limits I had set for myself.

That night, after hammering out 41 miles in two days, I slept uncovered and unfearful of the world around me. I slept naked in the darkness, with nothing to protect me but the black of the night. The next morning I awoke with only one thing left to do: to hike. I welcomed the clouds, the rain, the elements others dislike; those had become my friends, those are what I’m made of now. I had become the wind. 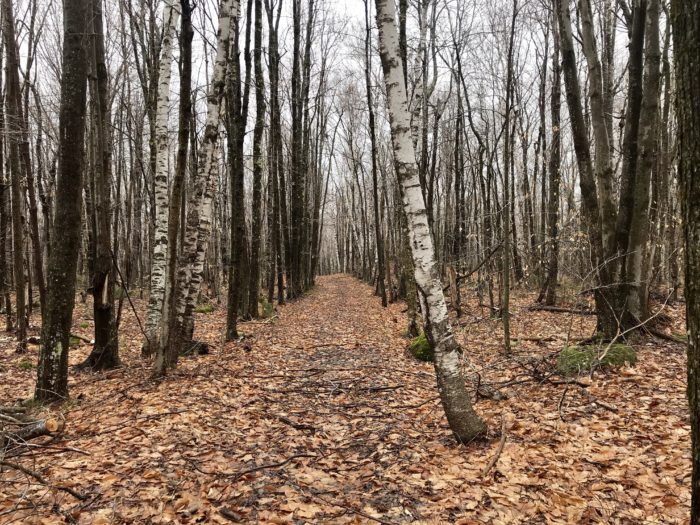 The final day started without the technology I was accustomed to using. My GPS watch had died the night before and with no way of charging it, I had no way of knowing when my journey would end. But I was the wind now, the wind that blows through the trees and has no beginning or end. So I strapped on my pack and I blew down the trail. I blew over pine trees, through streams, up and down hill after hill and mountain after mountain. I ate when I was hungry and I drank when I was thirsty, but I didn’t stop blowing.

As the hours progressed and the elevation increased, the pain in my feet became severe. I know what a stress fracture feels like, and there was a hint of that pain developing. But I was miles away from everywhere and had God knows how much farther to go to the end of my journey. So I pushed on and I slowed down and I swallowed hard on the fear that was building. I was so close to finishing an epic journey and there was no way I was going to give up now. I was the wind and the wind doesn’t stop blowing, even when it comes up against a barrier. So I kept blowing. 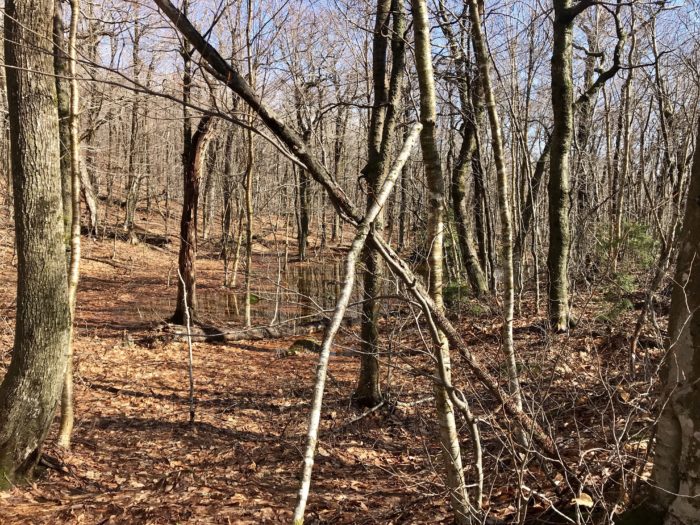 And then, and then, yes I think that was the end, that was where the journey ended. The path came to a stop, right there on the summit of another mountain. Seventy-two hours, 55 miles north, I emerged from the clouds and planted my feet at the Northern Terminus of the Monadnock-Sunapee Greenway. Three days earlier I had been picked up on a breeze, on a northerly wind blowing over the wilderness between two mountains in Southwestern New Hampshire. The breeze carried me over many mountainous miles, through fields, between tree-lined paths in the woods, up and down so many times, until it dropped me right where I needed to be. And in the process, that breeze grew to hurricane-force howling, window-shattering, cloud-covered, Socked In. I am the wind.