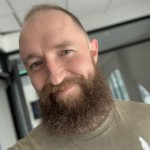 Sweet Monkey on the LT: VT15 to Sterling Pond via Whitetop Mountain

When hiking into town there are two widely accepted options: nero and zero. A zero day is fairly straight forward as it involves at least one day completely off the trail. This full rest day is utilized to recover from injury, recover after a long or particularly tough section, waiting on mail drops, or a host of other reasons one might need a full day away from the wilderness.

A nero day, which is what we took, involves hiking into town, spending the night, and hiking out the next morning. Planning mileage to allow for nero days breaks up some of the tougher sections with a shower and a real bed. Both allow for resupply, rest, and town food, but the nero kept us moving along quickly.

Following much-needed rest at Nye’s Green Valley Farm, Michele and I planned a 10.7 mile day over Whiteface Mountain to Stirling Pond Shelter. Several NOBO hikers we passed north of VT15 spun myths about miles of snowmobile paths and logging roads ahead, but after four days, we almost lost hope in finding trails wide enough to walk next to each other. We definitely got what we asked for.

After a quarter-mile section of ATV path, the trail turned right and began a three-mile section of logging road that was continuously uphill. We flashed back to a gear check hike in Southern Indiana where a trail closure and reroute forced us on a two-mile paved road walk in full sunlight back to the truck. Thankfully, most of the three miles of logging road was shaded, and flowing water snaked by us on the right, so we were at least able to stay hydrated. Our escort of six to ten deer flies never left us, however.

A day hiker out with her dog was warned by a NOBO hiker that he spotted a bear and her cub a ways back, so Michele and I decided the bear and cub were hiking south with us since it must be the same bear and cub we saw the day before.

The trail cut left after the logging road section ended, and we continued a steepening ascent up to Bear Hollow Shelter for a protein bar snack. 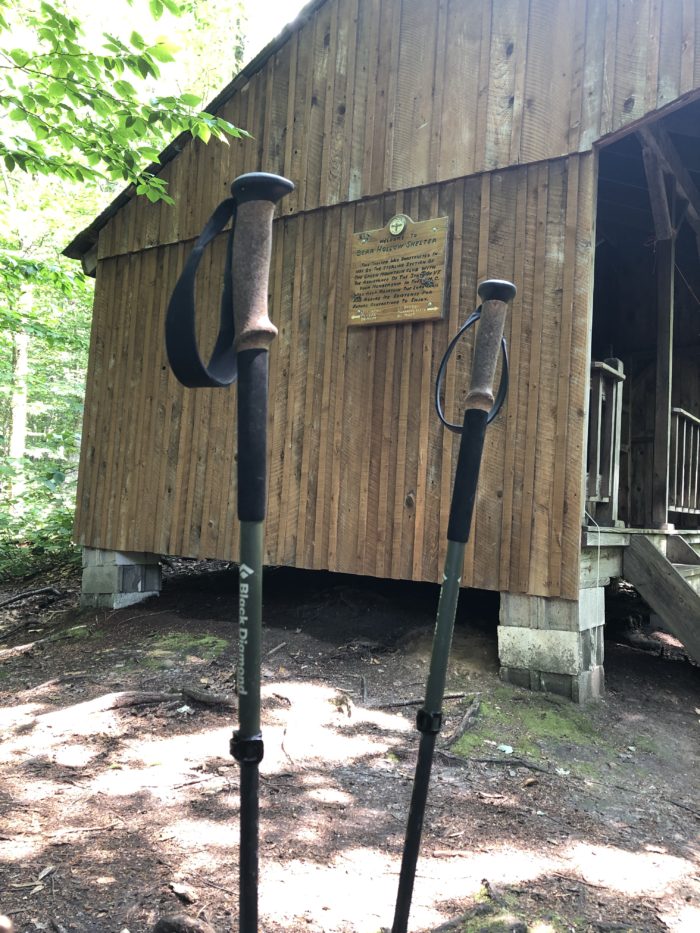 After a quick bathroom break, we continued our journey up Whiteface Mountain. The terrain was similar to what we had experienced to the north with roots, rocks, and muddy patches increasing in steepness until the summit. 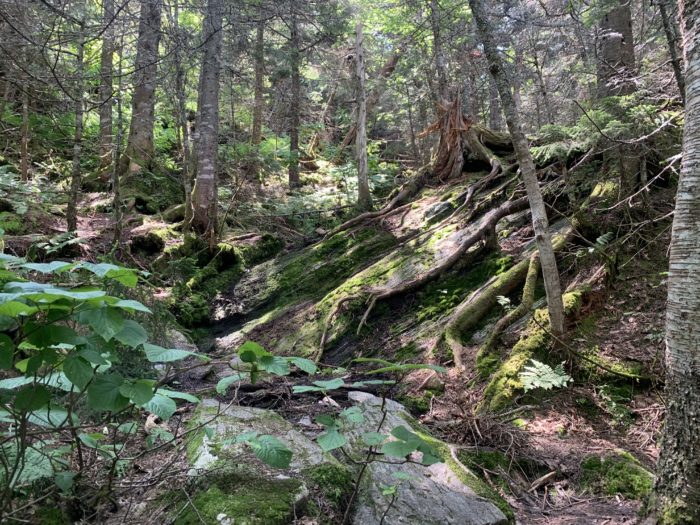 While sitting at Bear Hollow Shelter, I opened up my spreadsheet with planned mileage and realized that we could make some small changes to our mileage schedule for more comfort.

Small backstory: while planning this hike, my parents told me they were interested in spending some time in Vermont during the same time I was hiking and that they would like to support Michele and me if they could. Originally we planned to meet before Camel’s Hump and do some half-slackpacking between gaps for a few days. Since Michele and I were two days behind schedule from starting a day late and taking a shorter mileage day on day three, my parents were arriving in Vermont this very same day.

I sent a text message to my folks and told them that if they were going to be in the area that we would be able to meet them at the Barnes Camp and hiker parking lot in Smuggler’s Notch. Luckily, their hotel room was ten minutes from the parking area, so Michele and I abandoned our 10.7-mile day and settled on a 14.6-mile hike with three days of resupply in our packs to get another night in a hotel and offload some extra weight before Mount Mansfield the next day.

After almost seven miles of climbing we reached the summit of Whiteface Mountain. The mostly wooded summit offered no views to speak of, but a short spur trail offered a view of Mount Madonna, which we would be summiting later that day. 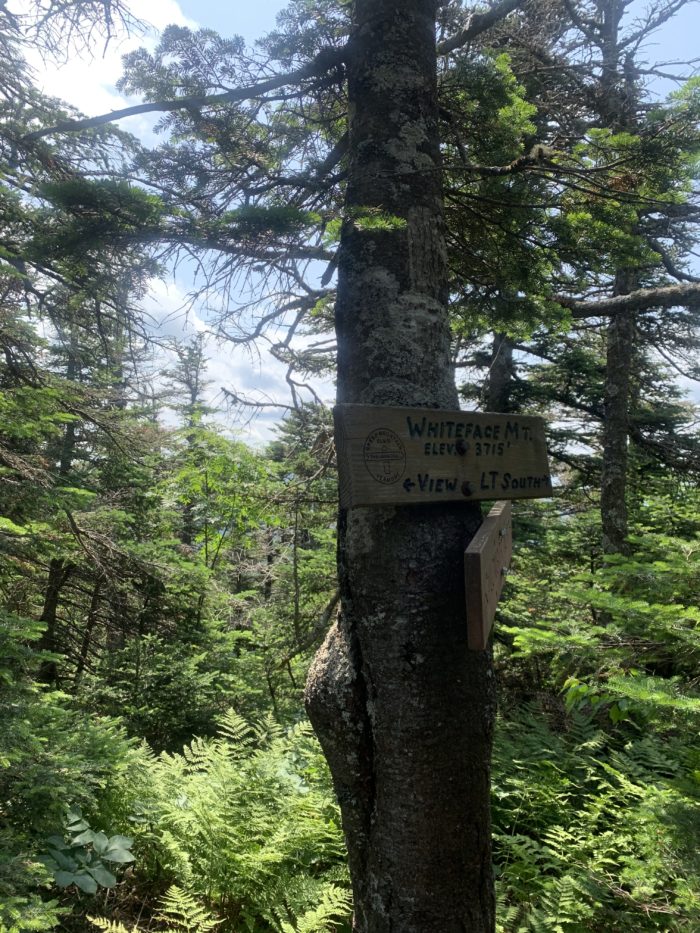 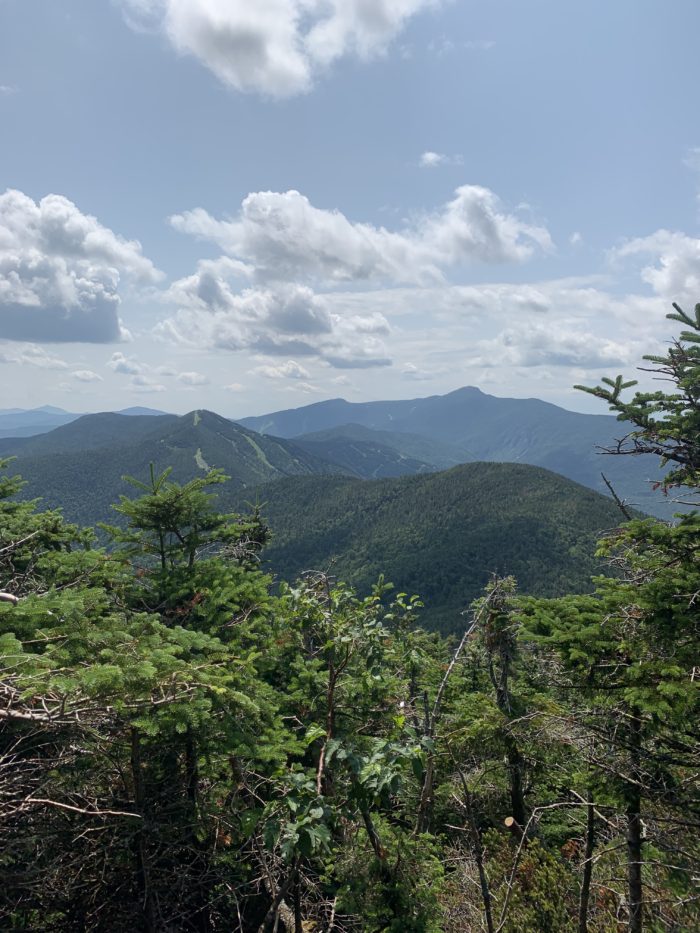 During our resupply in Johnson, I picked up a pack of Starburst, and Michele and I instituted a reward system for finishing the climb strong: Summit Candy. 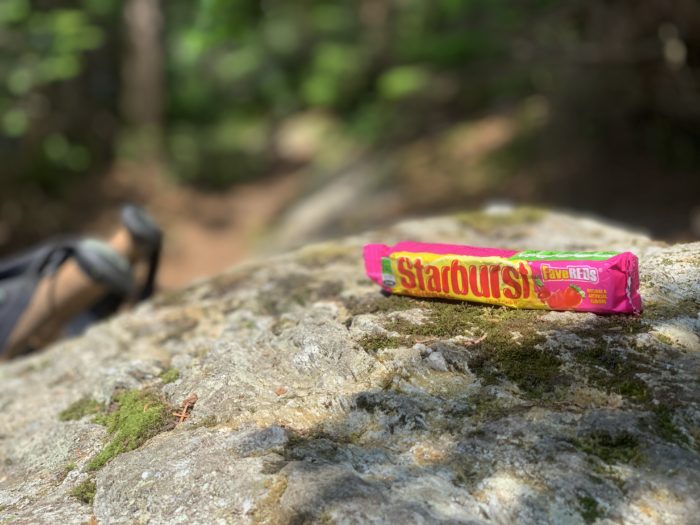 On to Madonna Peak

After descending about 600 feet, we decided to stop for lunch in the Whiteface Shelter. The shelter boasted a nice view of Madonna Peak, so we ditched  our deer fly escort (we figured out they won’t follow us into a shelter or any place dark) and fueled up for a longer day than originally anticipated. 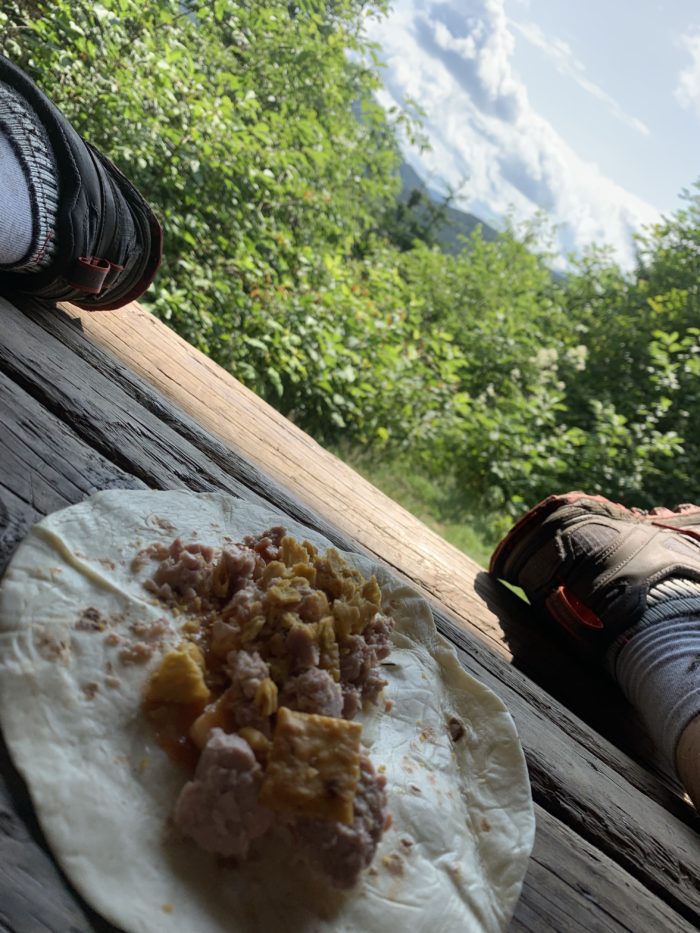 Several nice overlooks and views dotted the trail prior to Madonna. The climb up to Madonna peak was similar in feel and length to climbing Jay Peak (no thunderstorms this time), and we enjoyed summit candy once more before beginning a rough descent to VT-108. Passing Stirling Pond was difficult because the heat of the day and the reinvigorated deer fly escort from the open and sun bathed summit made a swim call tempting. 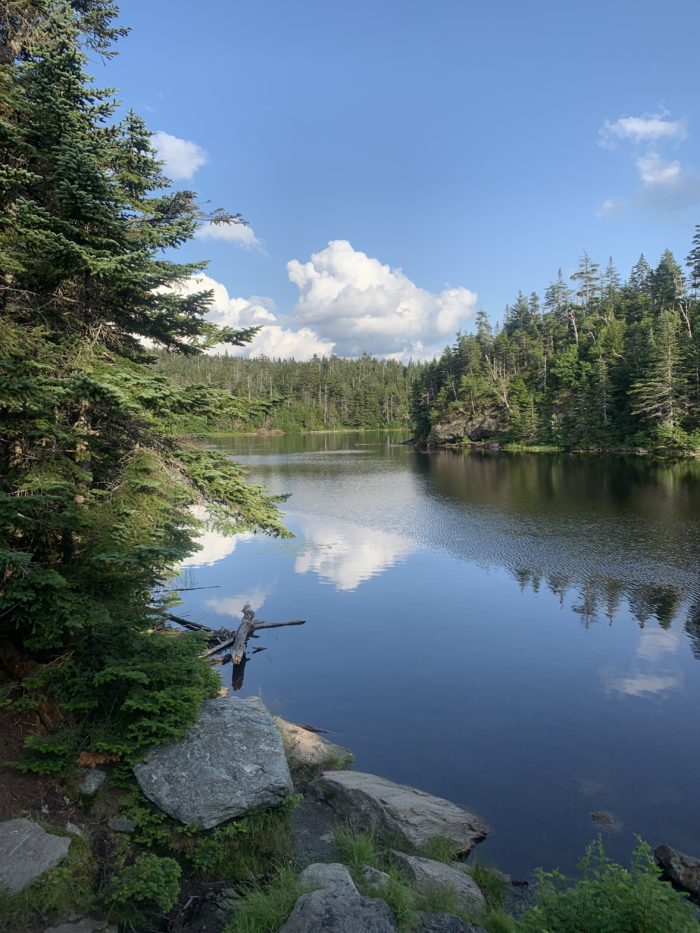 The hike down to VT-108 was not technically difficult compared to what we completed in the north already, but our knees continued to bother us with every downhill step. Our pace slowed significantly, but we reached the road without injury and met my parents for a ride back into town for the night! 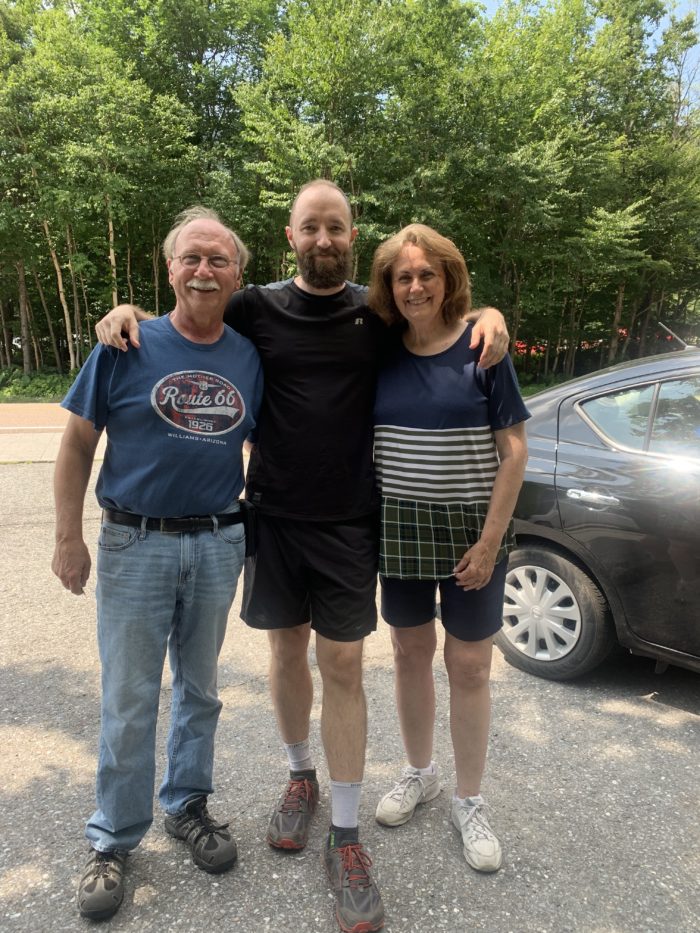 Michele and I want to give a big shout-out to my parents Rob and Shelly for lots of support over the next few days!

Up next: Mount Mansfield, Bolton, and a zero day!