I had always assured people I wouldn’t be alone on the AT, but knowing I would be a southbounder, I’m not sure I really believed it. But when I got to Medway, there were seven of us in the van on our way to the AT Lodge–all southbounders. I summitted Katahdin last Tuesday with three other hikers: Derek, Neon, and Fiber One. Neon got his name from a hiker on top of Katahdin who noticed his brightly colored shoes. Fiber One wouldn’t tell me how he got his name, and he acted really embarrassed when I asked. Come on, Fiber One! We’re all friends here! Derek and I summitted the mountain in two-and-a-half hours, and then I camped at KSC with Neon while Derek pushed on to the next shelter, which was about 13 miles down the trail. Ain’t no way I was doing that after the Katahdin summit. 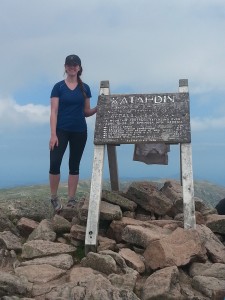 Not a very epic Katahdin picture . . . because it’s the beginning, not the triumphant finish.

It rained all that night and was still raining when I woke up, but I packed up my tent and pushed on to the first shelter, where a summer camp group rolled up and started dropping shredded cheese all over the shelter. I thought about pressing on to the next one but was ultimately too lazy. 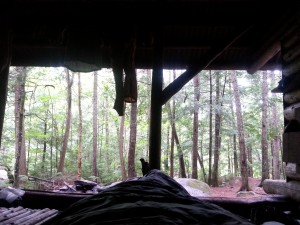 The view from my first shelter.

The next couple of days were relatively easy in comparison to what was to come, but I spent them cursing the rocks and roots that make up the trail in Maine. To me, the trail is less of a trail and more of an obstacle course of boulders, roots, logs, and bogs. At one point I was crossing a bog on a log, and the log tipped over lengthwise,  sending me flying into the mud, where I landed on my butt. Back home, a trail typically means a dirt path through the woods. Here, the trail has seldom been a dirt path unencumbered by random obstacles. And let’s not fail to mention the mosquitoes that swarm me in a craze like moms at a Luke Bryan concert. This swarming phenomenon made it nearly impossible to stop comfortably for a snack. 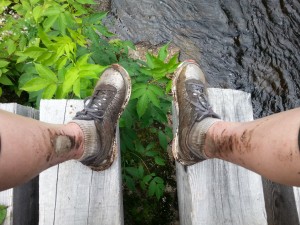 Maine filth. I scrubbed so hard to get it off, but it wouldn’t quite budge.

A few days in, the trail got really hard. According to my guidebook, I climbed ten mountains in two days. And switchbacks don’t exist here–the trail just goes straight up and sometimes requires the use of your hands to do some technical bouldering.  When I climbed Chairback Mountain, it was the fifth mountain of the day, and it requires some serious bouldering. Nobody warned me about that S.O.B., and I’m super pissed about it. When I got to the shelter that night and found Painted Lady and Pippi waiting there, I had never been happier to reach a shelter and to get some rest. That day I had my first good cry. The next day was just as hard, and I had an even better cry. 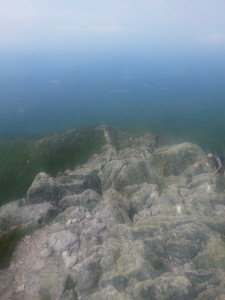 Not a great photo, but this is an example of some bouldering on Katahdin.

I used to look down on people who quit their thru hikes early, but after my week in the 100-Mile Wilderness, I totally get it. As I was trudging over rocks and roots through grueling ascents, I was thinking of all the things I miss about home. I really like my life! So why did I leave it for this? But even though the past week was really hard, it gave me a great sense of accomplishment and strength. I had done what seemed impossible! I had climbed every mountain! Forded every stream! I had done it! I can do this. 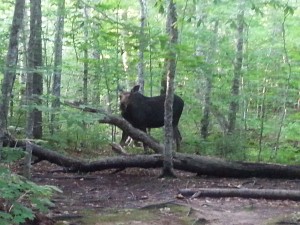 A moose wandered into the shelter campsite!

There’s a saying on the AT: “When the going gets tough, the tough get their ass to town.” That saying is true. Sometimes all it takes to feel like you can face the trials of the AT is to head into town and eat some ice cream and a good meal. After a couple of hot meals in Monson and two scoops of ice cream, my feet and my emotions were well rested. I now feel like I can get back out there and keep doing what seems impossible. So on to Caratunk I go! Thanks for the words of encouragement some of you have given me so far.