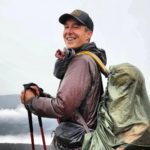 Quick Disclaimer: There’s a little more swearing and poop-talk in this post than normal.  Read on at your own risk.

Even though I’m 1000+ miles into an Appalachian Trail thru-hike, I still self-define as a creature of comfort.  Just because I’m backpacking nearly the entire width of the continental US doesn’t mean I can’t relax and enjoy myself along the way.  Check out my gear list; I’m carrying some pretty heavy luxury items.  Hiking as fast and light as possible is not my goal.  My initial plan was actually to drag out this grand adventure for seven months and finish in early October.  I quit my job before starting, and have no concrete plan post-trail, so it’s not like I have anywhere to be!  We’re taking ‘er easy out here.

Still – I felt a twinge of envy and admiration when I heard fellow thru-hikers talk about banging out 25-30 mile days.  Could I do that?  In the last few weeks, I’ve been slowly ratcheting up to 20 miles/day, and the 23-24 mile days I’d completed weren’t terrible.  It doesn’t hurt that I’ve passed through the gauntlet of the southern Appalachians and into Virginia (which IS NOT FLAT, but is… you know, less steep).

Then I heard about the 4-State Challenge.  The AT through West Virginia and Maryland is “only” 43.6 miles (according to the 2022 AWOL AT Guide), so if you’re truly determined (and a little touched in the head), you could set foot in Virginia, West Virginia, Maryland, and Pennsylvania in one day on the trail.  Add in the extra miles to get to campsites before and after the state borders, and I was looking at an ~45 mile day.  A few friends had already completed it (lookin’ at you, Marathon) and I figured I was just crazy enough to try.  What’s the worst that could happen? 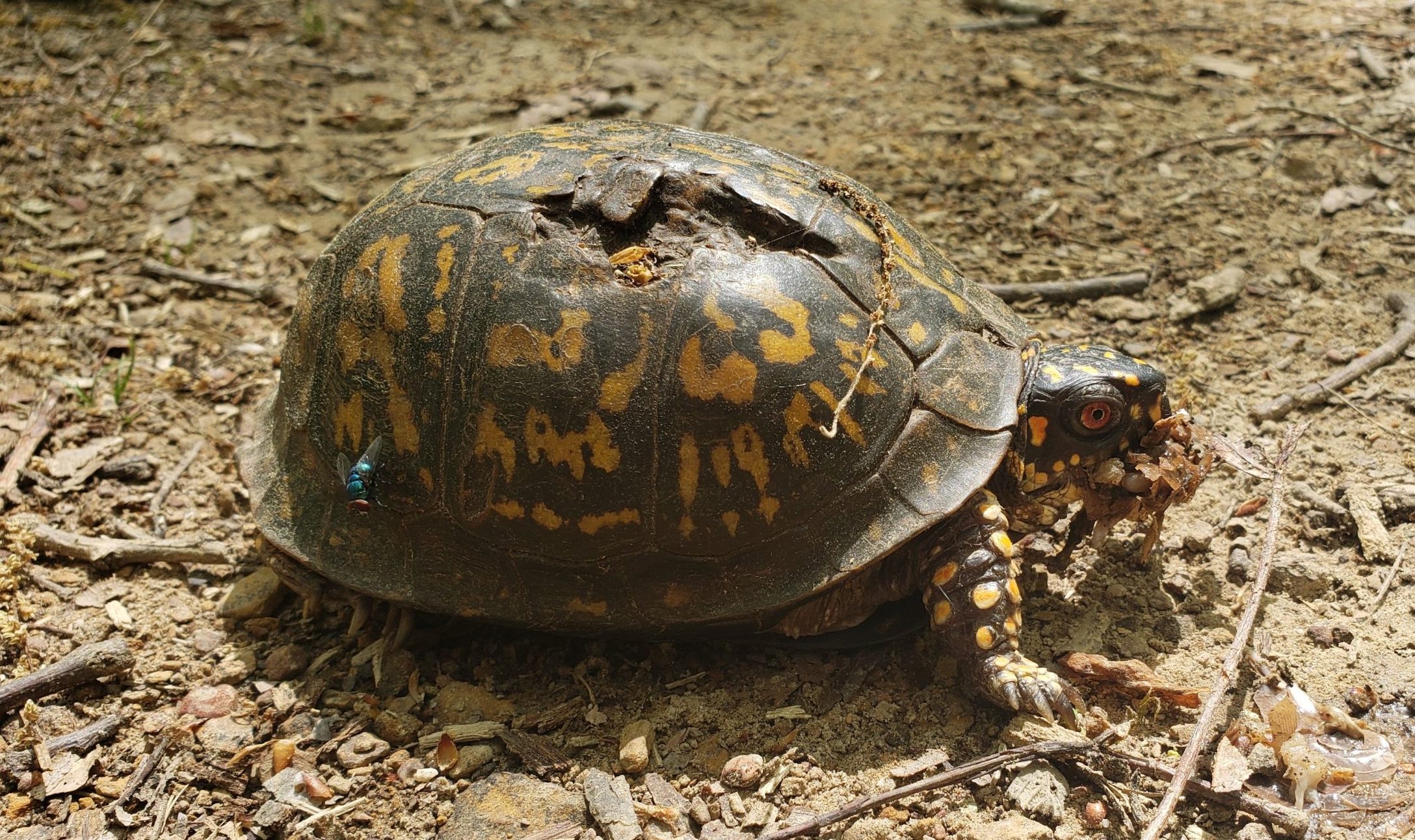 The Calm Before the Storm

The days leading up to my 4-State attempt were clear and cool, while my mind was aflame with nerves and excitement.  I did everything I could to prepare.  I’d be attempting it on my 4th day out of Front Royal, VA, so I’d only be carrying the food fueling me during my big day.  To lighten my load, I mailed a few non-essential items (Kindle, condoms, etc.) to Harper’s Ferry, where I was planning on meeting my parents the day after.  I got close enough that I only had 14.5 miles to hike the day before my big push.  I even planned where I would stop for lunch and dinner during the 45 miles, to eliminate as much decision-making as possible during the day itself.  Planning ahead gave me a false sense of control, but it did help me get to sleep the night before.

The forecast showed severe thunderstorms, but I’ve completely lost all faith in weatherpeople, so I wasn’t terribly worried.  I’m still grumbling about the time they predicted sunny skies and 0.5″ of light snow and we ended up thigh-deep in snowdrifts near Roan Mountain.  Fool me once, shame on you.  Fool me twice, shame on me.  Fool me a few thousand times – you must be a meteorologist. 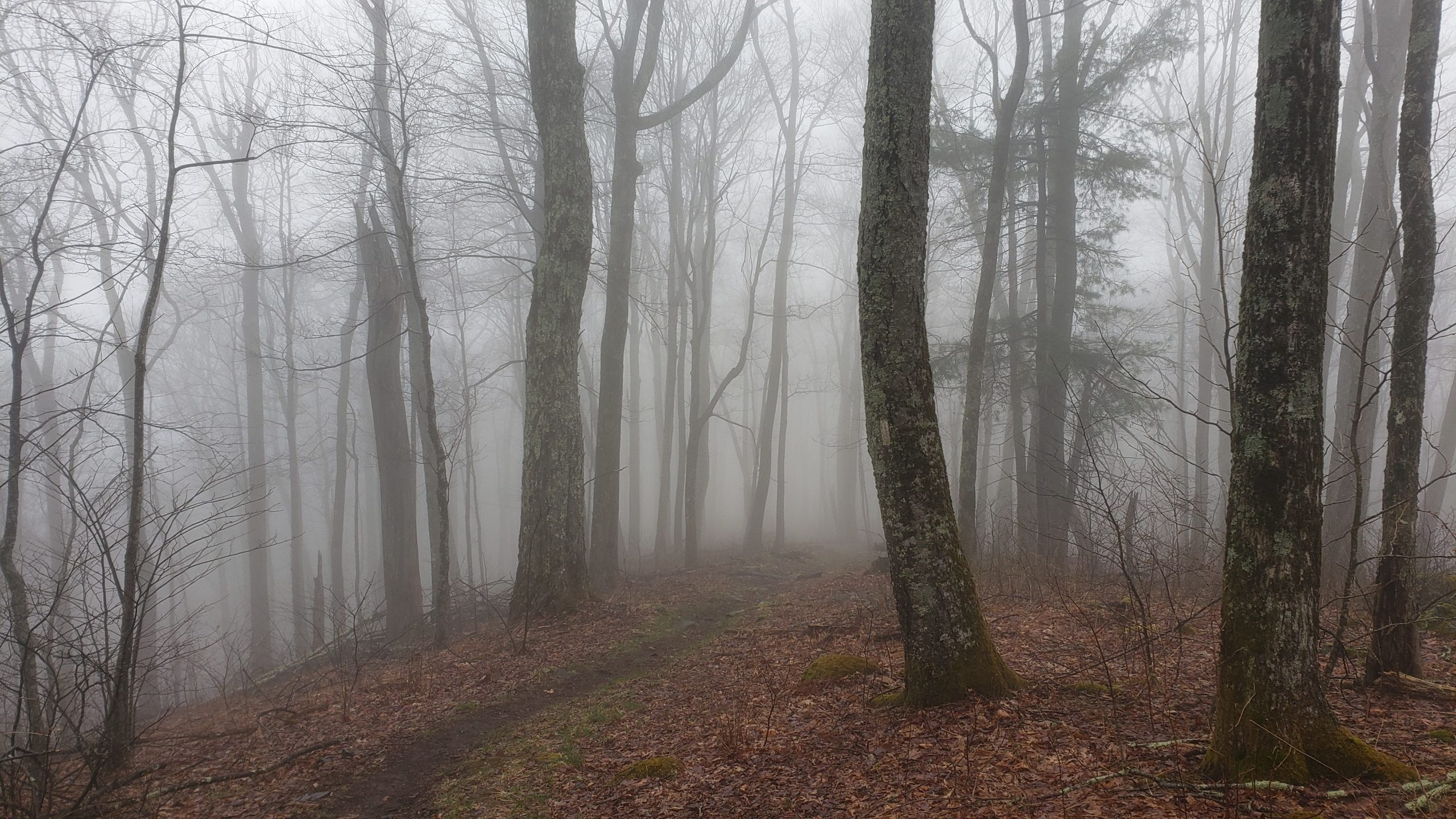 A sunny day, according to so-called “meteorologists.”

Suffice to say, I wasn’t as worried about the weather as I should have been.

There’s a reason they call me “Catchup” – I’m always the last to leave camp in the morning.  If I wanted to keep getting up early, I wouldn’t have quit my job.  I prefer to slooowly awaken as the sun gently *tickles* my eyelids, yawning and stretching until I eventually stroll out of camp at, say, 8:30 a.m.  Or 9:00.  Ok, maybe more like 9:30.

In order to hike 45 miles and still finish before midnight, I knew I had to get up by 4:00 AM.  Ugh.  But when my alarm went off, I was so flooded with excitement for the day ahead that it was surprisingly easy to get moving and I managed to hit the trail by 4:40, my fastest camp breakdown yet (including, of course, my first poop of the day).  As I expected, the forecast for the morning (thunderstorms starting at 5 AM) turned out to be completely wrong, and I was only hiking in heavy mist.  I blithely thought, “maybe I’ll stay dry all day!” Ha. Ha ha.

In order to quickly hit the three mph pace I was striving to maintain, I started off my day with some caffeinated almond butter and Pop-Tarts.  As someone who’s basically cut caffeine out of their life entirely, this turned out to be a big mistake.  My brain and muscles felt fucking amazing, but my bowels were not as receptive.  As I walked through a silent Harper’s Ferry in the pre-dawn stillness, I was desperately searching for a public restroom.  Fun fact – the bathroom right along the AT in historic Harper’s Ferry, which is shown on every single map, is permanently closed!  I came extremely close to just shitting against a historic building, before convincing myself I’m not quite that level of hiker trash (yet?).  I hustled across the bridge into Maryland, along the C&O Canal for a couple hundred yards, and down to the banks of the Potomac River for a very scenic 2nd shit of the day as the sun was rising. 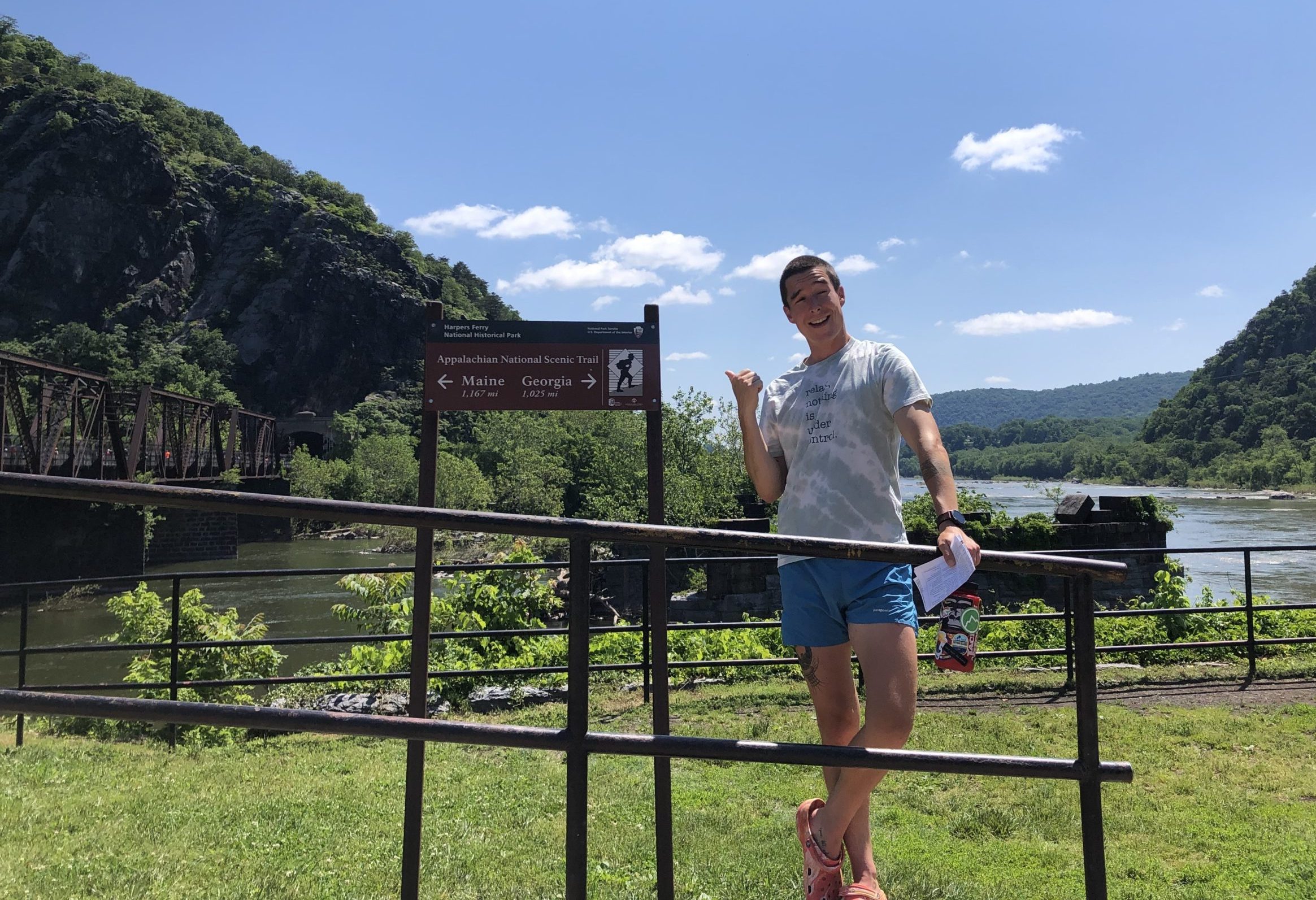 Bridge from WV to MD, the day after the 4-state challenge. Freshly showered, empty colon, and in a COTTON t-shirt.  Look at this cocky SOB.

I sucked down some peanut butter and devoured a fiber-rich Greenbelly breakfast bar, thinking those would calm my stomach – nope.  Less than three miles later (and only seven miles into the day), I scrambled off the trail to drop trou yet again.  I’d like to tell you I was a couple hundred feet away from the trail, but I think 25 feet is more accurate.  A single step further and I would’ve needed to change my shorts.  Leave No Trace can be hard, guys.  At least I was able to dig a deep enough hole in time.

By the time I hit my first shelter of the day (only 0.3 miles later) it was becoming a bad joke.  People tell me I’m full of shit, but Jesus, this was getting ridiculous.  I barely paused to drop my pack before waddle-sprinting to the privy for my 4th evacuation of the day.  After refilling my water, and praying for an end to the shit-storm, I was back on the trail…

…but the Lord of feces is a cruel Lord.  Mile 13 brought a public restroom at Gathland State Park, and my 5th cheek-clenched, panicked shit of the day.  If the emergency poops hadn’t finally stopped, I might still be out there now, frantically digging catholes.

And So It Begins

I made it 17 miles before the rain started.  The light sprinkle quickly escalated into a fucking downpour and I found myself chuckling as I was battered by waves of wind and rain (yes, I am that guy).  Sometimes, the weather is so bad you just have to laugh – what the hell else are you going to do?  As my old construction Supt. from Alabama used to say, “you can wish in one hand and shit in the other – see which one fills up first”.  You can’t change the weather so you might as well adjust your attitude.  When you can feel your feet swimming in your boots, and the trail ahead is literally a river pouring down towards you, you have two choices: irritation or amusement.  I choose the latter.

I was only out in the deluge for 45 minutes before I made it to the refuge of one of the many public bathrooms along the AT in MD (Dahlgren Backpack Campground).  Once the downpour stopped two hours later, and I’d changed into a fresh set of clothes and wrung as much water as possible out of my first outfit, I was back on the trail.  Even though my boots were still completely soaked, I put on dry socks to prevent blisters.  I knew that they, too, would soon be damp from my boots, but anything was better than my sodden socks from the morning.

Just a few miles down the road, I stumbled across a public restroom with a hand dryer (thank the sweet Lord above) and was able to reduce the moisture in my boots somewhat.  And of course, while I was there, I took my 6th and final shit of the day.  I apologize to anyone who walked in that bathroom after I’d been in there – the combination of hot, wet socks, rank caffeine shits, and yeasty boot smells made for a truly vile mélange.

You may have noticed there aren’t any photos in this post from the day of my 4-state challenge.  That’s because my Samsung smartphone (supposedly waterproof, although only for up to 30 minutes underwater) was so saturated that it completely stopped working around hour 13/mile 28.  I won’t leave you in suspense – my phone did not recover.  Although I normally hike in silence, it was a loooooong rest of the day without any music or podcasts to distract myself, especially as it got darker and my views were limited to the reach of my headlamp.

The thunderstorms started again around 9:00 p.m. and continued for the next two hours.  I’d changed into my third and final pair of dry socks when I stopped for dinner, so the only thing to do was keep moving and get to the PA border.  I kept waiting for my legs and feet to seize up underneath me, but they stayed strong all day; in fact, around mile 30, I started to feel miraculously strong and incredibly cheerful – riding high on endorphins and my body’s endocrine system.

I only got lost in the dark and pouring rain a few times, and by the time I made it to my campsite across the Mason-Dixon line, I’d hiked 47.9 miles.  Exhausted but pleased, I found a flat spot, got my tent set up, and passed the fuck out.

I won’t be doing any more 40+ mile days anytime soon, but I was amazed at how great I felt throughout the whole day and even the next morning.  Maybe I’ll start working some 30-mile days into my thru-hike, just to mix it up…

Until next time, see you on the trail!

Hey there! My name's Willy. I grew up hiking in the Shenandoah's and always dreamed of attempting an AT thru-hike. After 5 years of hating my corporate job and with my 30th birthday fast approaching (quarter-life crisis, anyone?) I'm finally doing the damn thing - quit my job, moved out of CA, and am coming home to the welcoming bosom of the Appalachians. I'm blogging with the goal of one day supporting myself as a writer. Subscribe to follow along as I walk, and walk, and then walk some more!