Have you had the strawberry one with icing and sprinkles? I just wolfed one of those bad boys down. Either they’re amazing, or I’ve been eating trail food for too long. At this point I can’t be entirely sure, but breakfast is sorted for the next five months. Now that my belly is satisfied I suppose it’s time to start hiking – I’ll talk to you again in just a bit.

Break times at lean-tos are becoming a regular thing. They’re perfect shields from the weather, whether it be shelter from rain or sun. We spoke about our various blogging avenues and moved on to potential books we could write as a way to occupy our time in the evenings – not that we have a lot of time to occupy; 8 p.m. is a hiker midnight.

During our discussion I threw out scenarios for an epic AT thriller (because the wildlife isn’t enough to scare me), and a kids book about Bear and his adventures on the AT. Don’t ask me how I went from stalker couples to cute cuddly teddy bears; I really couldn’t tell you. But stay tuned for Bear’s adventures; I’m writing that one.

Would you look at the time. 7 p.m. It’s almost bedtime so here’s a quick reflection on my day before I love you and leave you. What on earth happened to my quad? I have no idea what I’ve done but the pain makes every step excruciating. I’m pretty sure it’s just a cramped muscle as opposed to something serious, which is great news, but it’s been a very difficult day for me. I was fine leaving Monson, and fine for the first nine miles of the trail because it looked like this… 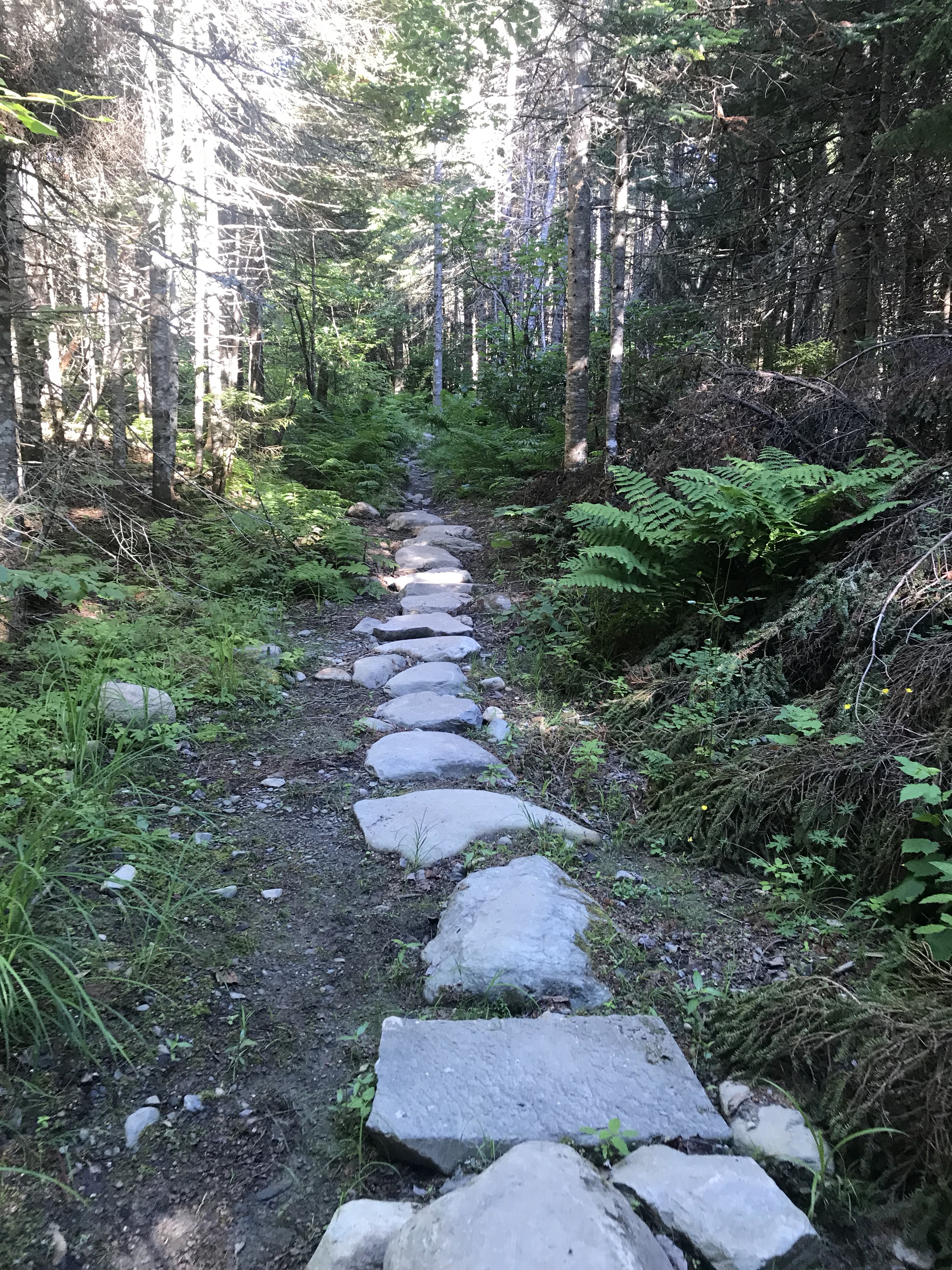 But the last few miles seemed to last a lifetime with the slight ups and downs. Hopefully, I’ll wake up tomorrow and the pain will have magically disappeared and unicorns will exist.

Last night was insanely warm. I’d stripped down to my sports bra and knickers and draped my sleeping bag over me like a quilt rather than using it in its normal cocoon style. Boy, did I regret that decision this morning. I’m surprised I didn’t wake up to icicles in my tent because it was freezing out.

After giving myself a much needed prep talk, I grabbed my puffy and headed outside for my bear bag. What did I find? An intruder. Someone had infiltrated our campsite in the early hours. Rude, I know.

It turned out to be Calories, though, so I let it slide. We’d met him and his trail buddies in the 100-Mile Wilderness a few days back. He’d got sick of hiking in the dark and decided to ditch his buds in favor of pitching a tent and sleep. 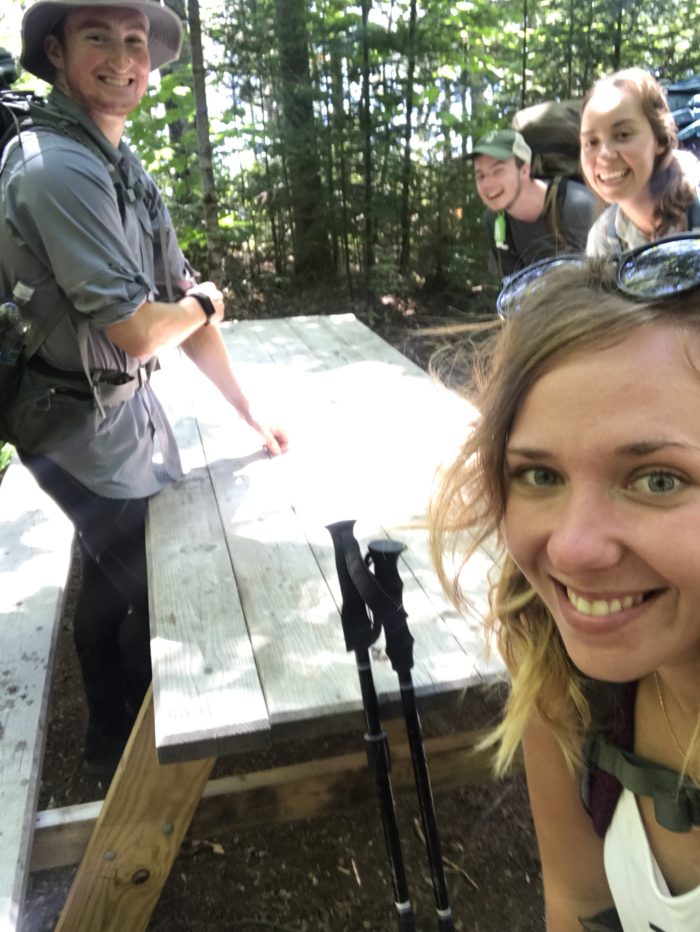 He’s clearly crazy cause one of his buddies has a dog. I would not have been able to leave that cute morale booster behind. That reminds me, while we’re on topic, if you have a dog that needs walking I’m your girl.

On the upside, Calories got to spend the day hiking with Al, Alex, and me. What a lucky guy. 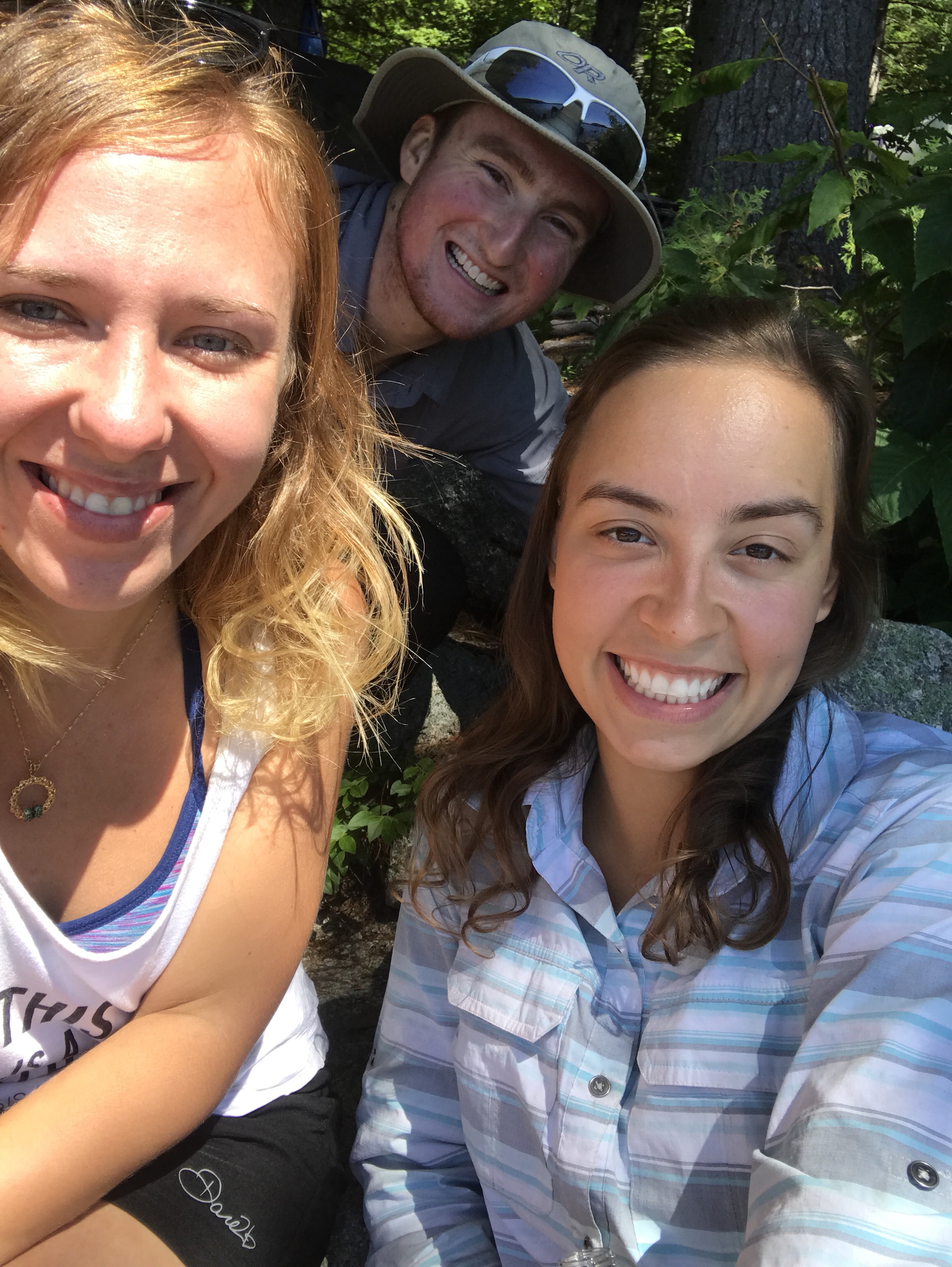 I think I’m starting to adjust to life in the woods. It takes seconds as opposed to ten stressful minutes and real concentration to pee behind a tree. That’s right folks, I’m no longer pee shy! If that wasn’t enough get this, I left my shoes outside my tent last night (they’re pretty smelly from all of the bogs). What’s the relevance, you ask? Well, as you know, I hate spiders, ants, and pretty much anything that crawls – but mainly spiders. So riddle me this; what do spiders like to crawl inside of? Bingo, you’ve got it! I grabbed my shoes and there he was, a red-bodied, long, eight-legged arachnid staring sadly up at me. Poor guy must hate the rain as much as I do. Did I scream and run away like normal? Don’t be silly. I politely asked him to vacate the premises while turning my shoe upside down, like any normal person. Impressed? I am.

Saying that, I did have a slight hiccup with my newfound wilderness bravery when a wasp started playing with me. Are they the spawn of Satan, or are they the spawn of Satan? Bees I can do; they sting you and they’re out of the game so they leave you be. Wasps, though, they’re a game-changer. They fly around your head taunting you, occasionally smacking you in the face to see if they can get a reaction out of you so they can use their locked and loaded stinger. Evil, evil beings. Needless to say I didn’t quite keep my cool.

Today had a lot of ups, but it wasn’t all smiles. Yesterday it was my left quad, today it’s my right. After a lot of rolling out I managed to get rid of the cramp in my left, but I must’ve been overcompensating with my right leg too much yesterday. Climbing up and down a mountain has not been fun, nor has it been an easy task. Despite the pain I managed to keep going and not let it get me down too much. Reaching the summit of Moxie Bald had us all mesmerized so the pain became an afterthought as we sat and ate lunch with a postcard view. 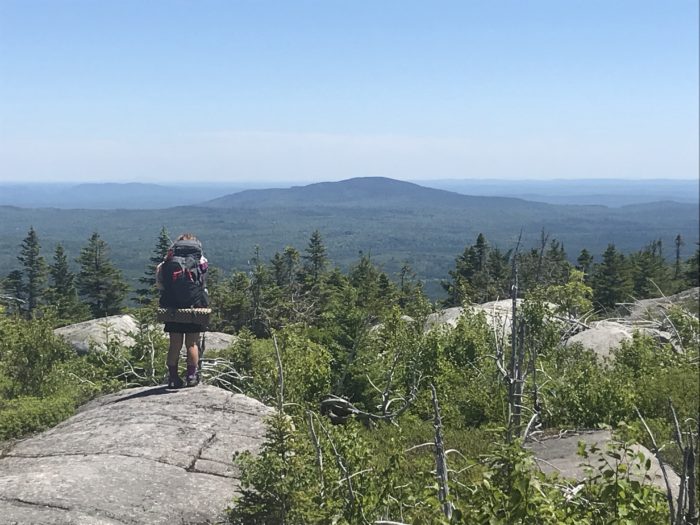 Isn’t it pretty? That view is still on my mind as I’m sitting on the side of a road by the river eating spoonfuls of peanut butter and a tuna tortilla waiting for the sun to go down. 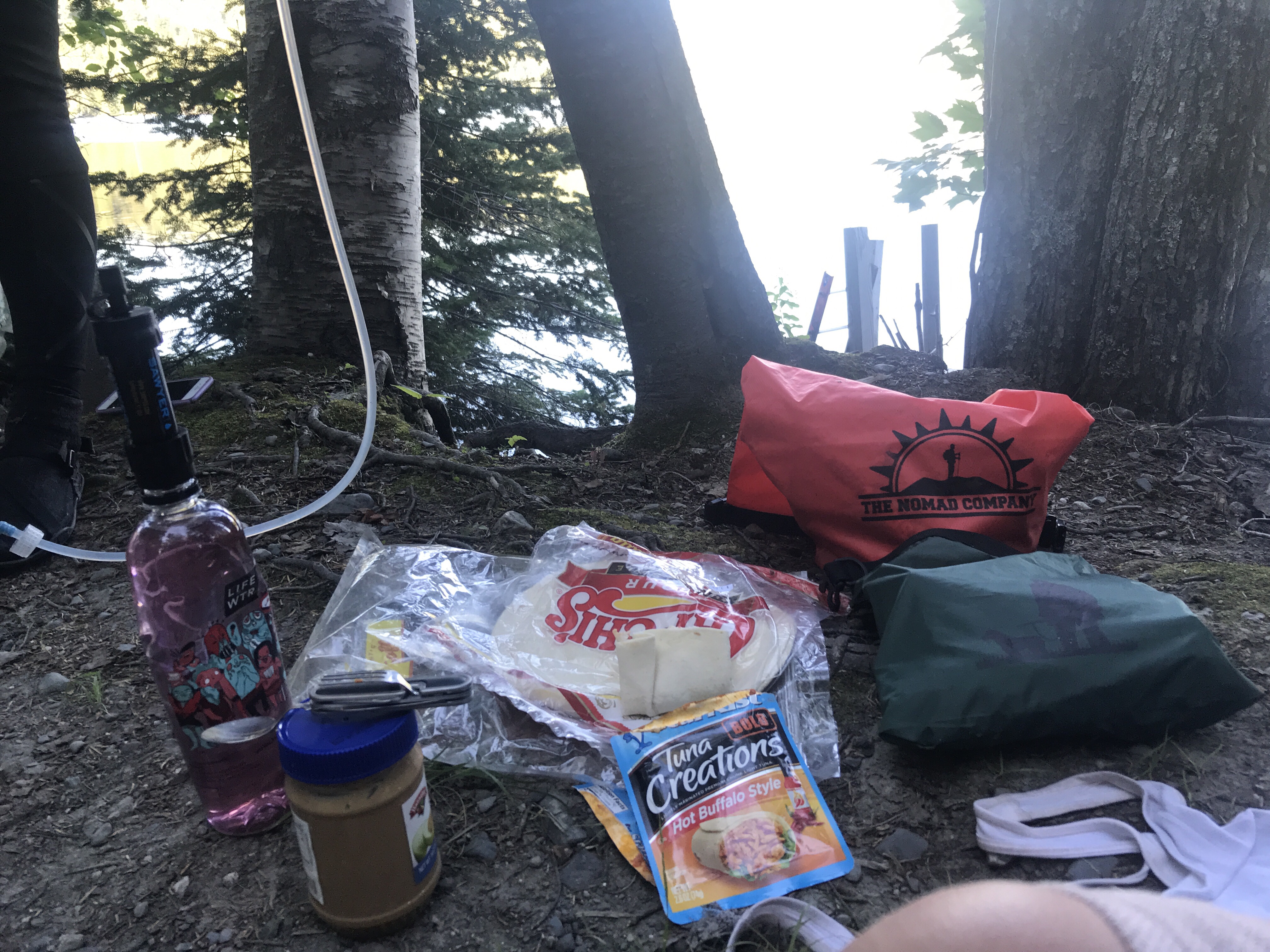 While it hasn’t been all smiles, it hasn’t been half bad at all. I could kill for a Coke right about now, though. A NOBO named Wings stopped to talk to us (after a casual 30-mile day) and spent a good ten minutes taking about all the trail magic down south. My Mio-flavored water just isn’t cutting it.

Sitting in a lean-to right now so I’ve got a few minutes to fill you in on my day. How’s it going? My leg can suck it. Mountains can suck it. Hell, today can suck it. All that’s keeping me going is the thought of a pulled pork sandwich, milkshake, and nero at Caratunk. Just 5.9 more miles to go. 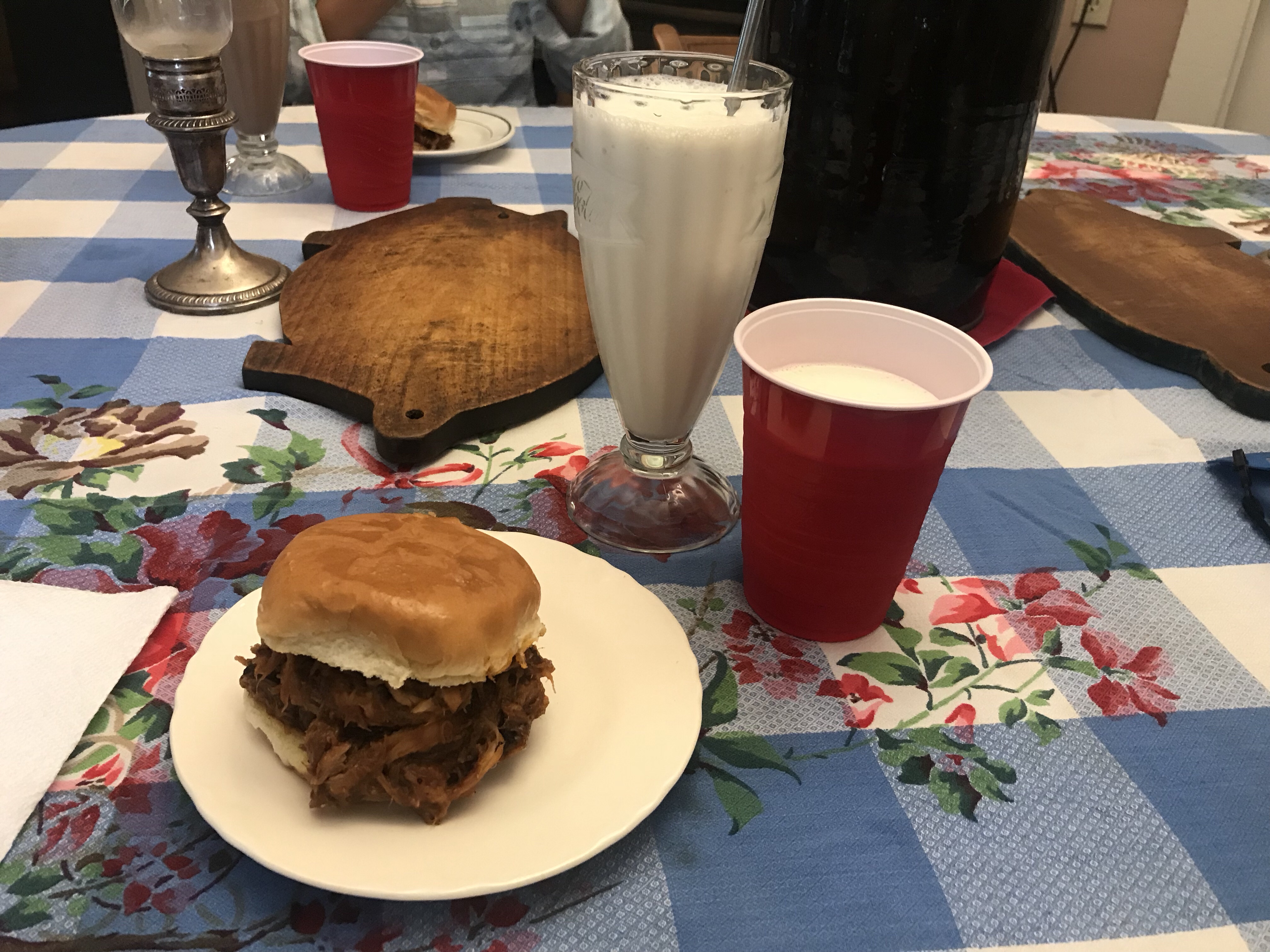 After a painful 5.9 miles I finally made it. Looks good, right? Tasted even better. Definitely put some cheer back in me. That and the luxury of a hot shower. Showers are one thing I will cherish from here on out.

Woke up to some awful news this morning. The weather outside married perfectly; it was miserable.

The one good thing about being on trail is that it takes you away from reality. I had little time to think about anything but the terrain and the path in front of me. Having no phone service helps, too.

We pulled a 14-mile day as we’re planning on getting into Stratton two days from now. We started off slow, but as soon as we crossed the Kennebec River in a canoe (officially part of the AT), we started putting away the miles. 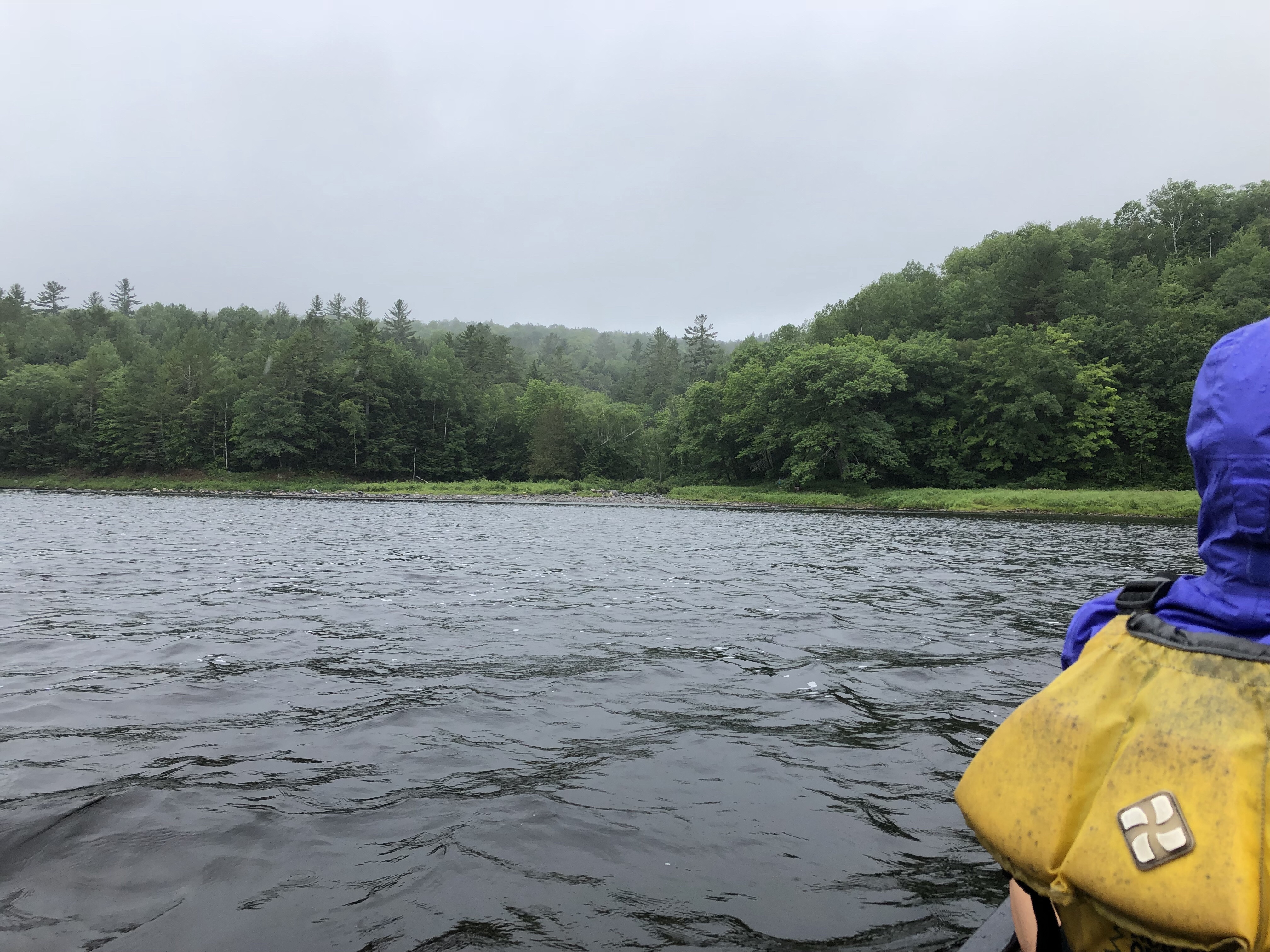 It wasn’t hard to do as the terrain was mostly flat. What was hard was managing to stay upright. I managed a comical face-plant, much to the amusement of Al and Alex. The way I went down was video-worthy. It took me a minute or two to unbuckle my pack so I could sit upright, which made me think of turtles. I now understand how they feel when they’re lying on their backs.

Favorite place of the day was Pierce Pond Lean-to; it was super pretty. 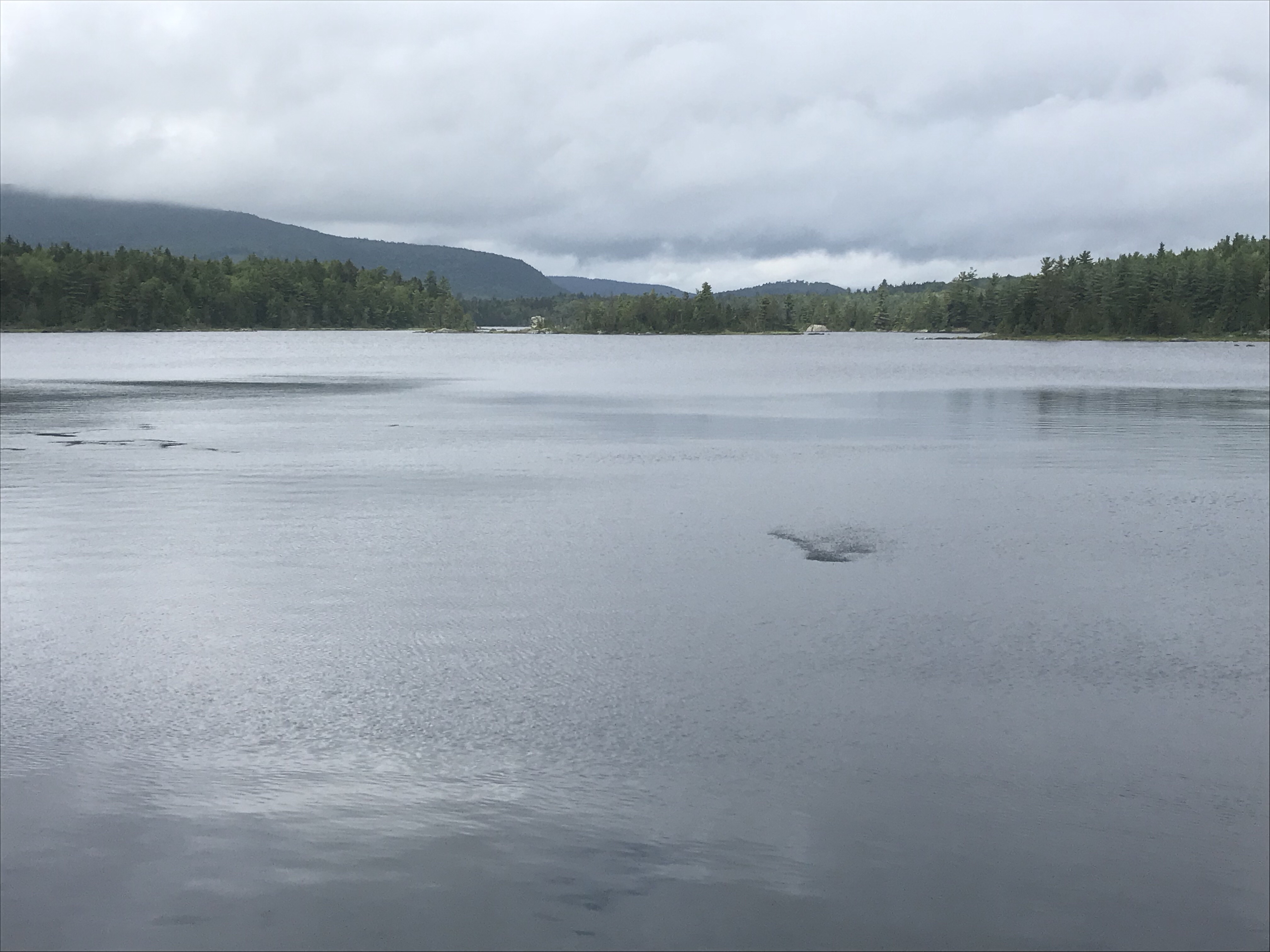 Maine is turning out to be a very beautiful state, and I understand why it’s a lot of thru-hikers’ favorite.

After about three miles I stumbled onto what seemed to be the set of a thriller movie. There were happy birthday banners tied to trees on the trail’s path and two people dressed in terrifying (or funny, depending on your outlook) costumes lying in wait. I had no idea what was going on, but I thought I was about to die. Alex had failed to tell me it was Alison’s (Flower Power) birthday. Al’s mother and twin brother had come to surprise her. They’re hiking with us for the next few days, too. 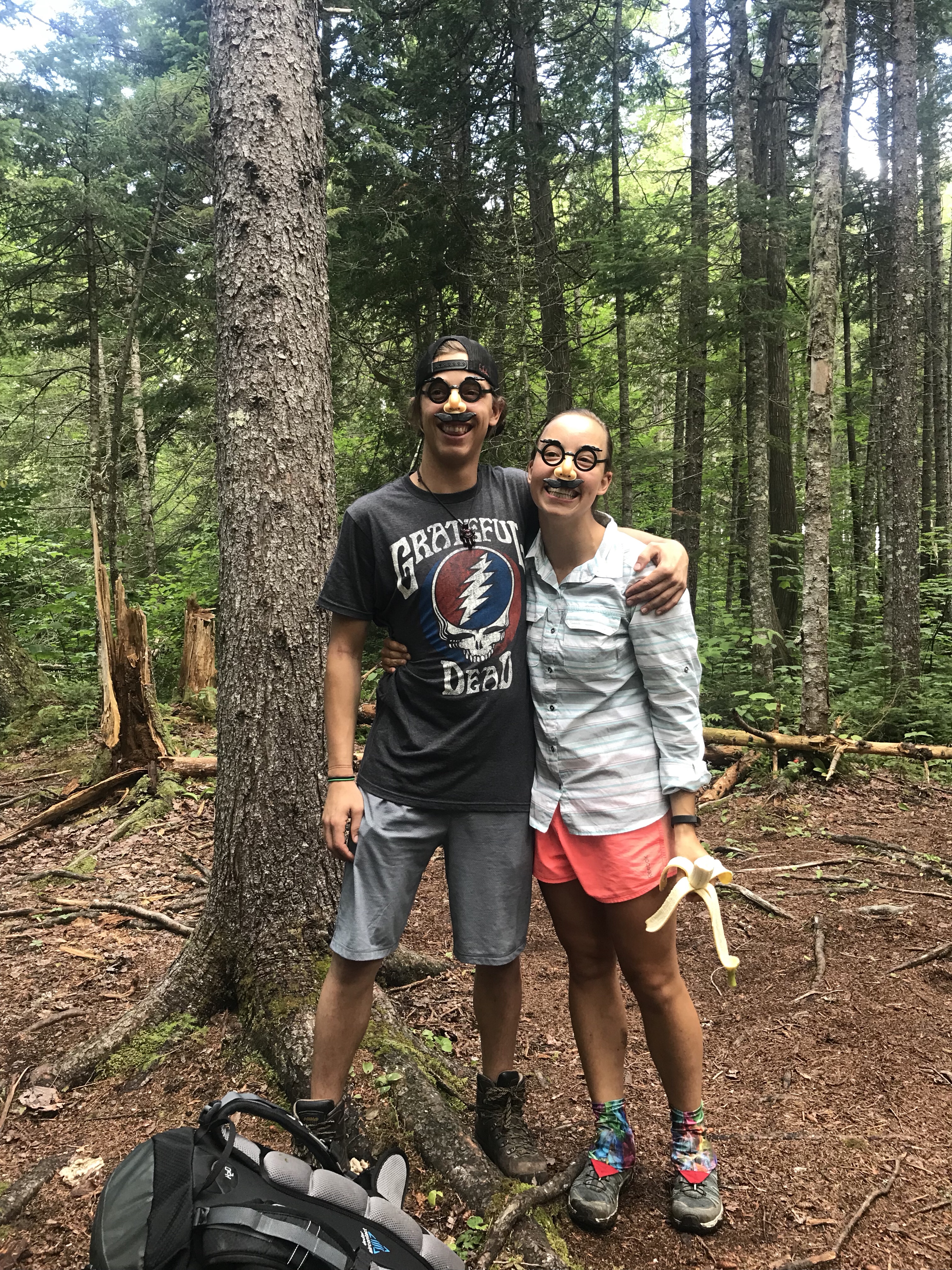 After the near heart failure we were ready to tackle Little Bigelow Mountain. For all of you that don’t know Little Bigelow, I’ll let you in on a secret…. she’s a tease. She provided some jaw-dropping views, but boy did she make us work for it. 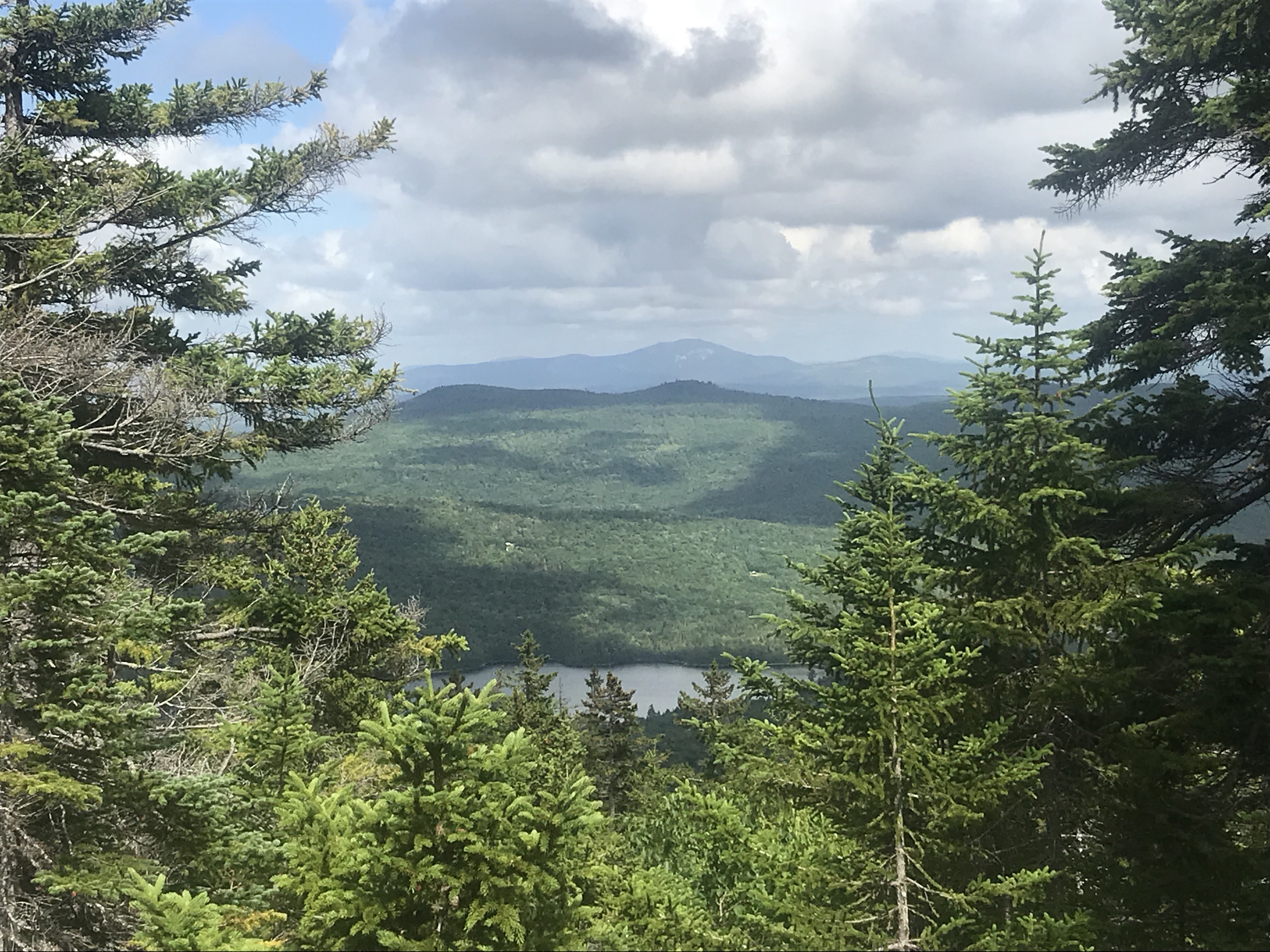 There was an awesome ledge you could sit on that overlooked the Bigelow Range. Had I not been tired from yesterday’s 14 miles and had it not been super windy, I would have perched for a while. The risk of the wind whisking me off the side wasn’t worth the gamble in my tired state. I did stand for a few minutes to appreciate the scenery and take a snapshot for you, though. 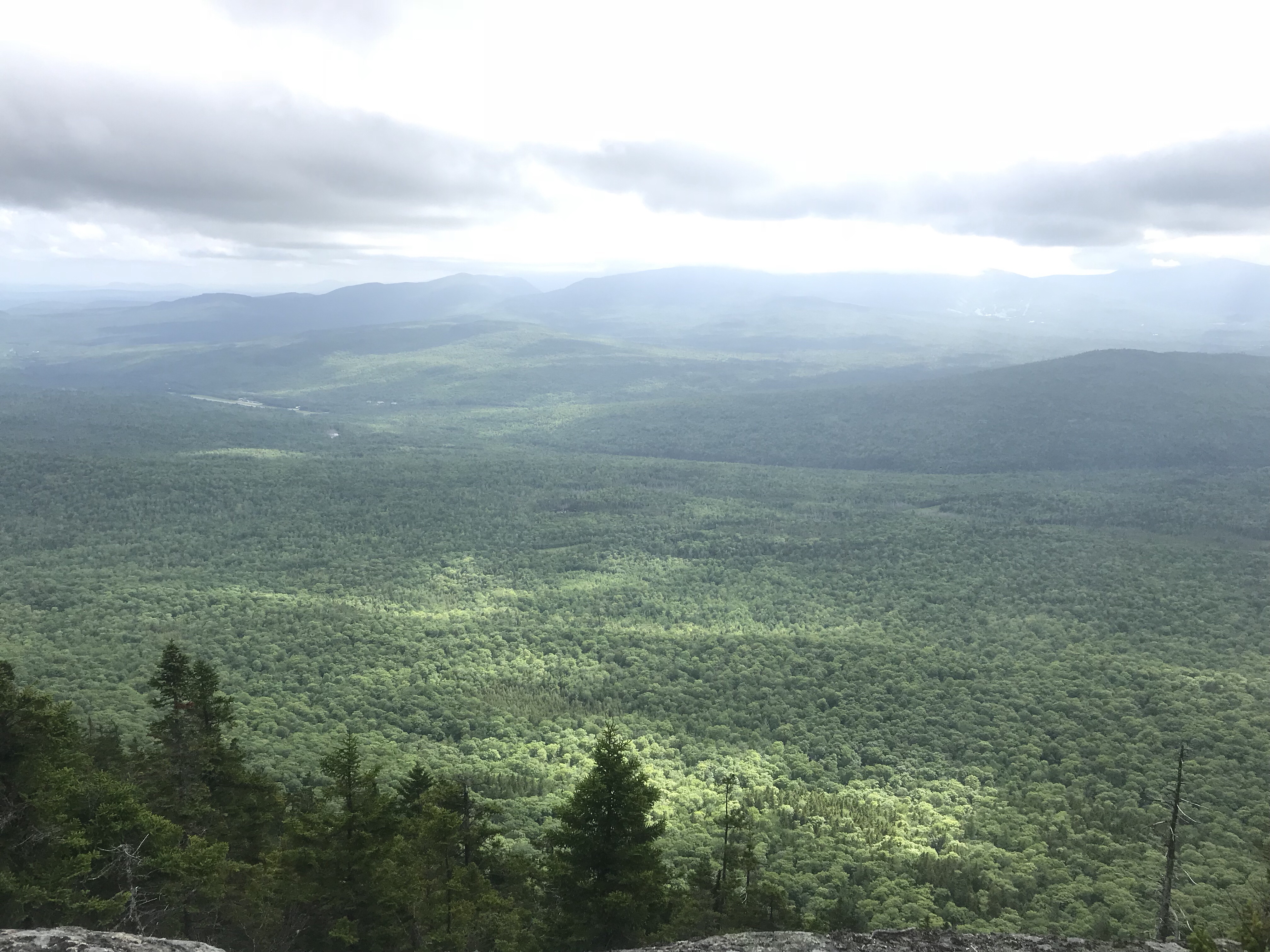 I didn’t take any tumbles today, despite the descent trying its best to increase my fall count. It’s tricky to climb down huge boulders and rocks with stubs for legs. Even Al and Alex struggle, so there’s really no hope for me. We’ve adopted the sit and slide approach for such obstacles, and if I’m being honest, it works like a charm.

I nearly forgot… we had our first taste of trail magic today. The sheer excitement over grapes must have been hysterical for the ordinary observer. To all of you trail magic goers, know that you are loved and appreciated. 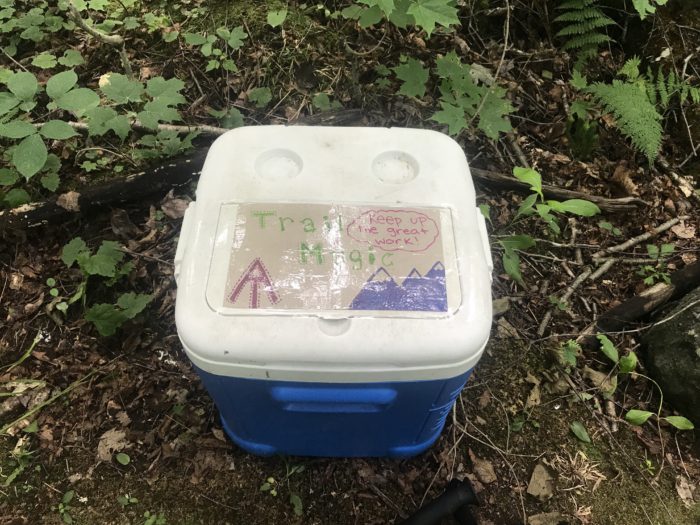 Big Bigelow tomorrow – I need my beauty sleep. Over and out.

What have you done today? If you haven’t perched on the summit of Avery Peak while eating a s’mores Pop-Tart you’re doing it wrong. It puts Moxie Bald to shame. Check out this view… 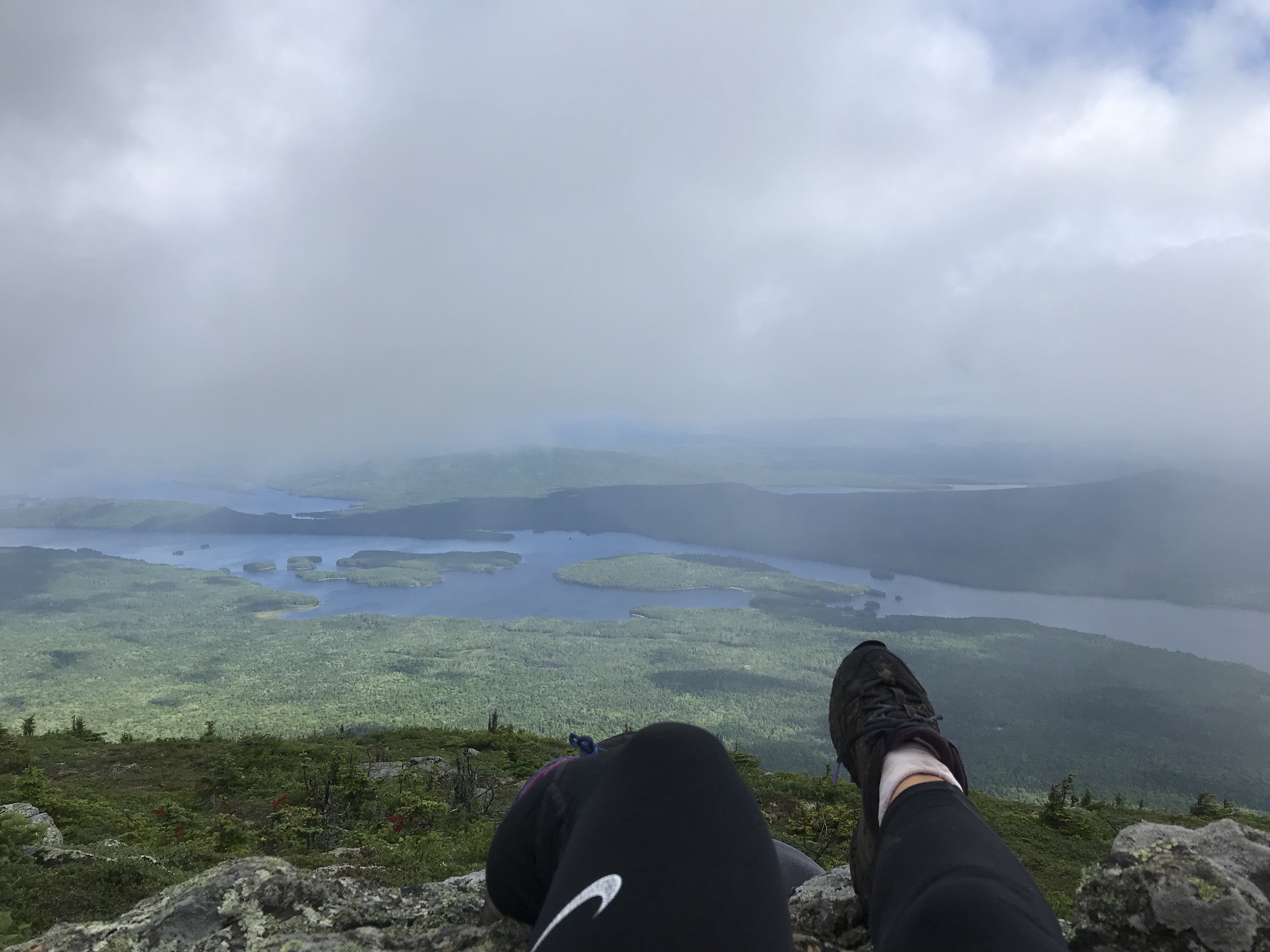 The weather could have been a little better, but the climb up was nice and breezy, and there was something oddly charming about the clouds rolling over us. 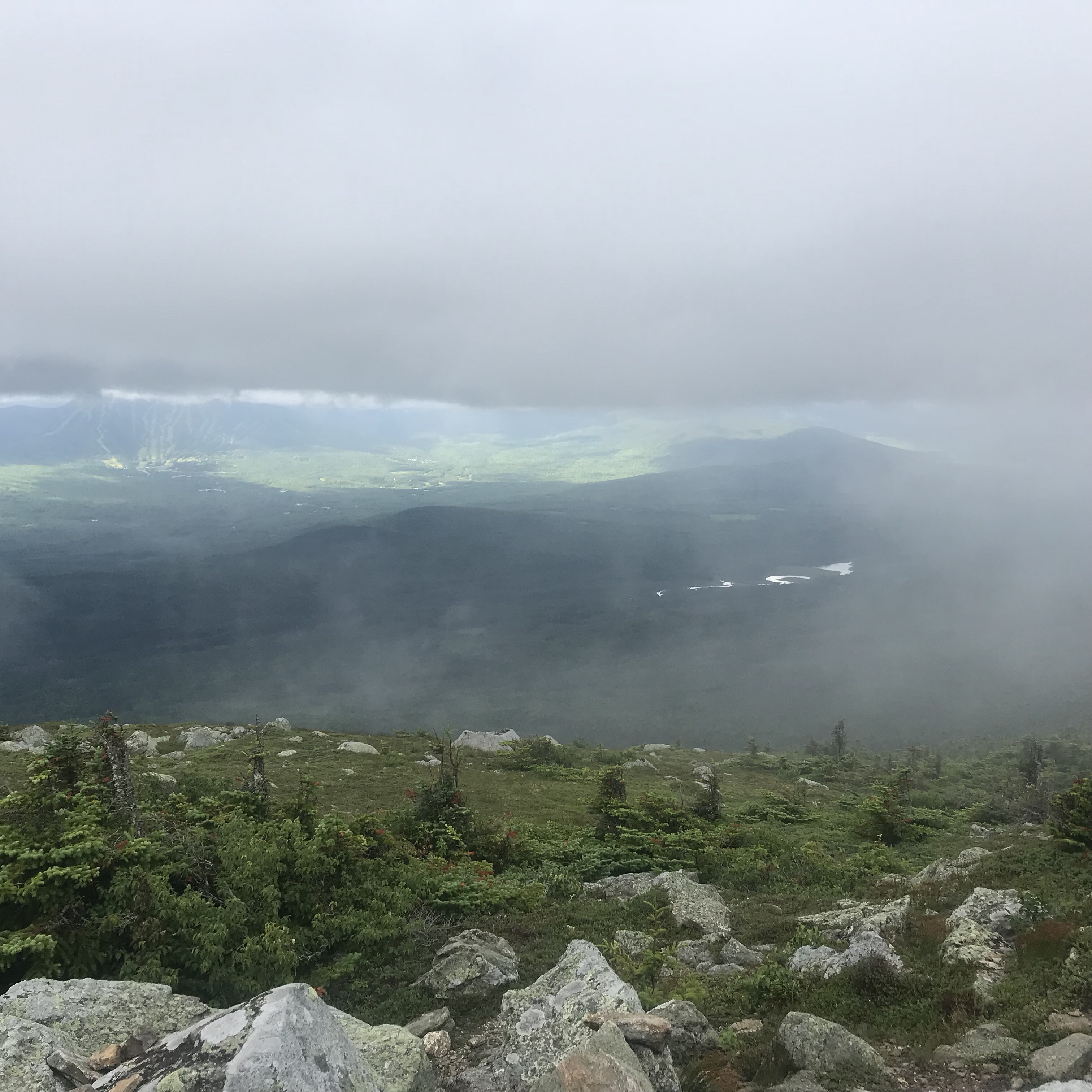 There should, however, be a sign before you take to the summit saying something along the lines of, Warning: wind may knock you down like a bowling pin. Oh, Mount Washington and the Whites, how I fear you right about now.

Need to get better at descending mountains. I am slow and it is terrifying. Should have taken a few rock climbing lessons before I started. No complaints from me today though – no more leg cramps and we’ve climbed three mountains. Yaaaay.

I’m going to end with a gem I think you’ll appreciate. Conversation of the day? Pills you put up your bum to make you poo (in case you only have an hour in the entire day where you’re able to relieve yourself). Flower Power’s mum is definitely adding some entertainment value to our little adventure. Perhaps we should give her the trail name Shitsticles.

About to head into Stratton for a nero/zero. Talk to you soon.