An Owl and Fontana Village

It’s amazing what a good night’s sleep does for the body! After a tasty breakfast of cherry pecan oats, I strode easily down the trail. The morning had patches of fog and I spotted a magnificent owl sitting on a tree branch. 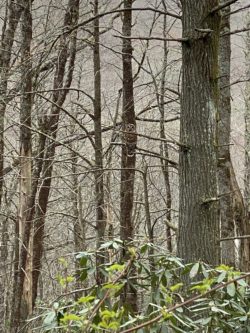 I took a break at the next shelter to get water from its spring and care for my feet. My first blisters showed up yesterday afternoon on both pinky toes. The culprit was rubbing from my socks that got wet and then froze. It took me too long to realize what was going on and change socks. Now care is a priority. The right blister was small so I applied fresh moleskin; I drained and bandaged the larger left blister.

Shortly after a late lunch I summited Wesser Bald. It had a fun observation tower whose wooden platform offered a 360 degree view. Afterwards the trail followed a ridge line for several miles then descended steeply. I surprised two yellow-striped lizards sitting on a log. White flowering trees appeared in solo or clusters amongst the bare branches.

Just as I spied my destination shelter I felt a jolt from my pack’s left side. A glance down revealed that the shoulder strap clung by only a thread to the body. It broke free as I sat on a log by several other hikers and a cluster of tents. An awesome lady, Terry, loaned me a needle and I reattached the strap using dental floss as thread. I am disappointed though as my pack is fairly new. Luckily my phone had enough reception to email Granite Gear about the failure.

Another positive, one of the ladies pointed out a big, black rat snake in the grass. I like snakes. It slithered away and I pitched my tent near where it had been. When it got dark I saw the flickering light of fireflies in the trees.

It was less than a mile downhill from camp to the Nantahala Outdoor Center. My first stop was the General Store to get a partial day’s food. Then I went to the River’s End restaurant and got breakfast; a feta and veggie omelette plus country potatoes. I admired the view of the Nantahala River from time to time while making use of the WiFi. The place was full of thru hikers; most of us charging devices. 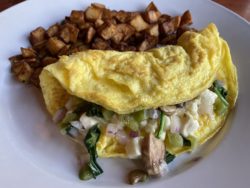 I heard back from Granite Gear. Their customer service is excellent! They are mailing me a new pack further along the trail. I will pick it up and use the same box and a return label to send back my damaged pack.

It was a reunion out front of the outfitter store. I chatted with hikers I met last night, two nights ago, and Psyched who I hadn’t seen since Georgia. The trail is funny like that.

About 1 pm, in the heat of the day, I left the Center and began the climb to Cheoah Bald. It was a 4,000 ft plus climb counting the dips into gaps and one shelter. I really enjoyed it and felt full of energy. On the way I stopped at a couple springs to refill my water bottles. AT water is delicious! A lot of the springs have one leaf or several inserted to make a natural spout. Here is a picture: 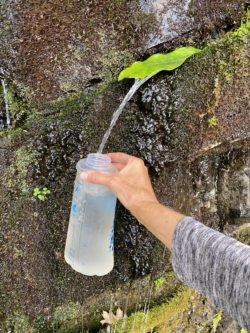 I was so glad I went past Sassafras Gap shelter, which looked rather sad. Cheoah Bald’s summit is at 5,062 feet. It is grassy, flat, and has an amazing view! I camped next to a couple section hikers that I met last night. We were treated to a colorful sunset. Now I get balds… they offer the best vistas!

This morning I saw my first rabbit on the trail. Otherwise I wondered if I’d have anything to write about and whether I got enough food yesterday. Then both problems were solved as I walked into Stecoah Gap. A huge trail magic event was going on!

There was an RV where I met Hopeful and his wife. It was his birthday and I guess he always does trail magic to celebrate. He hiked the AT in ‘03 and ‘11. Hopeful said ‘03 had great people but the weather was horrible, lots of rain. There was also a tent where a couple was serving up tacos. I had tacos, chips, a tangerine, tea, and ice cream. It was a feast! Space was made at a picnic table and I met a bunch of other thru hikers as well as two past hikers, both triple crowners, named Stride and Hunter.  (A triple crowner has thru-hiked the AT, CDT, and PCT.) For me it was like sitting next to a celebrity.

Through the afternoon I leap-frogged with hikers I met at lunch. I intended to camp at Cable Gap shelter, but was told it had major rodent issues that might affect tenting. So I got water to continue past the shelter and dry camp. However, descending into Yellow Creek Gap I came across more trail magic. I joined the group to chat and snack.

Afterwards I did end up tenting by the shelter along with two guys from the last trail magic. We had the place to ourselves. Later I was elevating my legs and a gal named Dragon Queen walked up. She is the first person I’ve met who started the same day as me and is at this point. 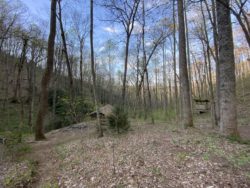 The night was excellent with no rodent issues. I slept well and woke to the sound of chirping birds. Soon I was cruising through the 5.5 miles to Fontana Lake. There is a small marina with a resupply stop, but I took the shuttle to Fontana Village.

At the lodge I picked up my second resupply box. Yay, so much yummy food! Then I did laundry while distributing supplies. It felt great to put on clean clothes. My pack fix held just barely to here, dental floss is stretchy, so I bought a little sewing kit and reattached the shoulder strap a second time. I feel that it will hold until Hot Springs; if not I have the kit!

I walked uphill to the Woodfire Grill and four people I met yesterday invited me to join them for lunch. They are a trail family that I enjoy being around: Meredith, Austin, Silent J, and Low Gear. I got to know them better while I ate a delicious veggie burger and sweet potato fries. They went in on a room for the night and invited me to use their shower. I did so gladly and it felt even more amazing than the clean clothes!

The shuttle took me back to the Marina area. I used the WiFi, then hiked 1.2 miles to the Fontana Dam shelter, nicknamed the Fontana Hilton. The shelter sleeps 24, has a water pump, a device charging station, and a bathroom with showers. I didn’t feel like setting up my tent so I claimed a spot in the shelter.