Fresh off of a zero day in Erwin, Tennessee I’d put in four solid hiking days to reach my next resupply point in Hot Springs, North Carolina.  Here are the daily details:

I have no quantitative evidence to back this up, but it seems that the roughest AT terrain always follows a town with a good taproom.  Such would be the case on Day 136 as well.  My fond memories of tipping pint glasses the prior night at Union Street Taproom quickly faded as I toiled up the non-stop pitch above the Nolichucky River.  My ace shuttle driver Steve had thankfully gotten me to the trailhead at 7 AM – because even at that hour the humidity was high.  And there was NO moving air.

At least I was treated along the way to some nice views of the popular rafting river as the sun rose over the ridge: 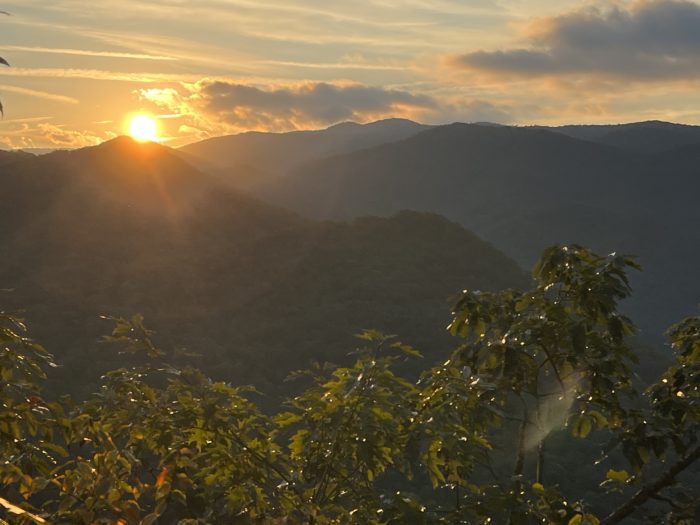 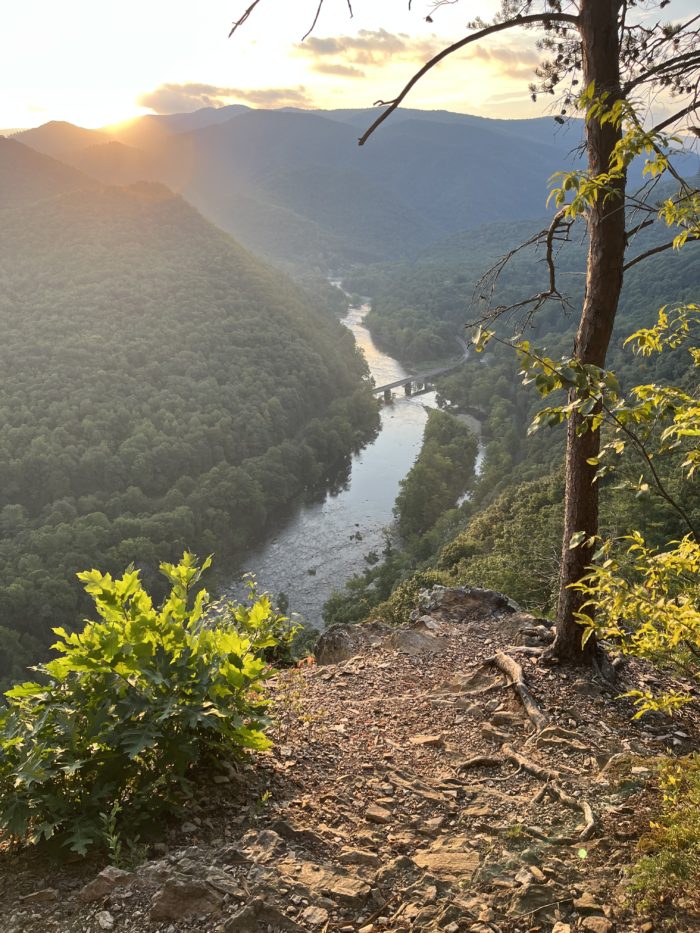 Later in the day I’d face a fairly steep and rocky climb to High Rocks peak, where I’d take a lunch break.  That was soon followed by another arduous, root-filled and twisting climb up Little Bald Mountain.  I don’t think it was a coincidence that earlier I’d passed the sign below in Spivey Gap, noting that the Carolina Mountain Club maintained the upcoming 93 miles.  The trail here had steeper slopes and less switchbacks than I’d seen so far in the South. I’d need to account for that in my mileage planning- I couldn’t count on two miles per hour in steeper terrain. 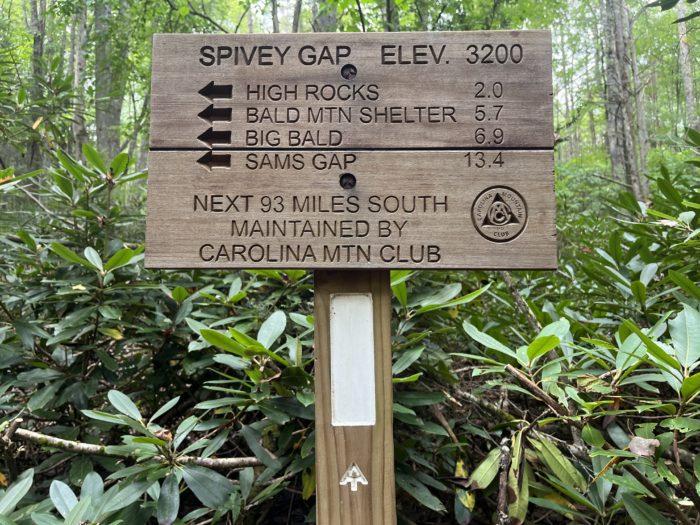 Another challenge on the Little Bald ascent was trying to avoid bothersome plants on the narrow path.  I’ve actually been amazed that I’ve not had at least a couple of poison ivy incidents on my trek.  In the past I had some serious reactions to it.

Here in the South I discovered a new skin-irritating foe, the stinging nettle: 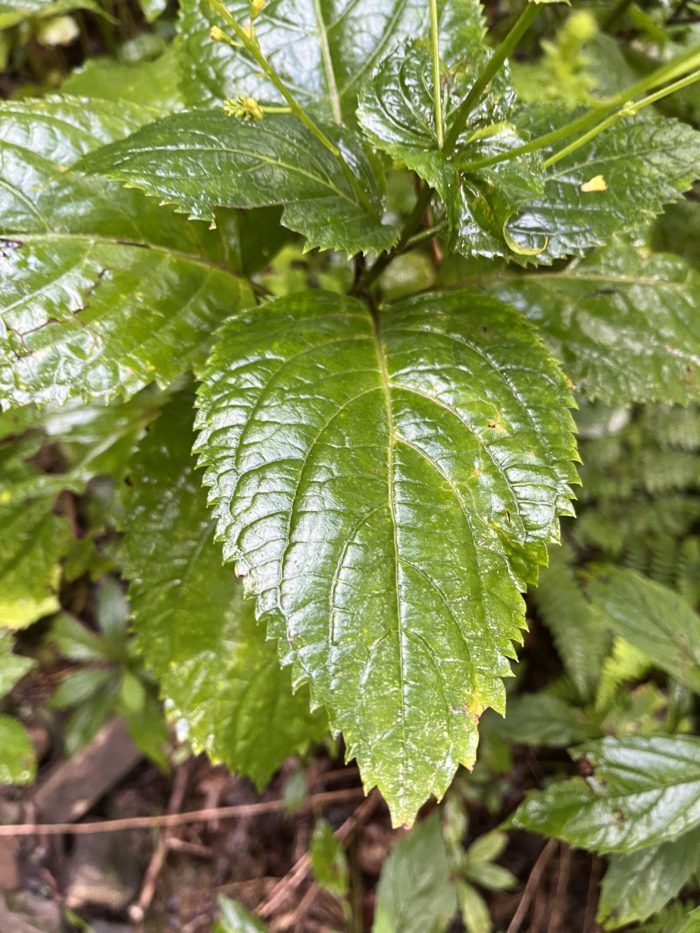 My first encounter with this plant, which I originally called a “serrated spade”, was in Shenandoah VA.  I stepped in the bushes to hang some wet clothes from a tree and came away itching my legs furiously.  I thought for sure I had poison ivy but no marks appeared on my legs.  The intense itchiness went away after about 20 minutes.  Since then I’d run into a lot of stinging nettle and danced around it as much as possible – but how could I not scrape against it here? 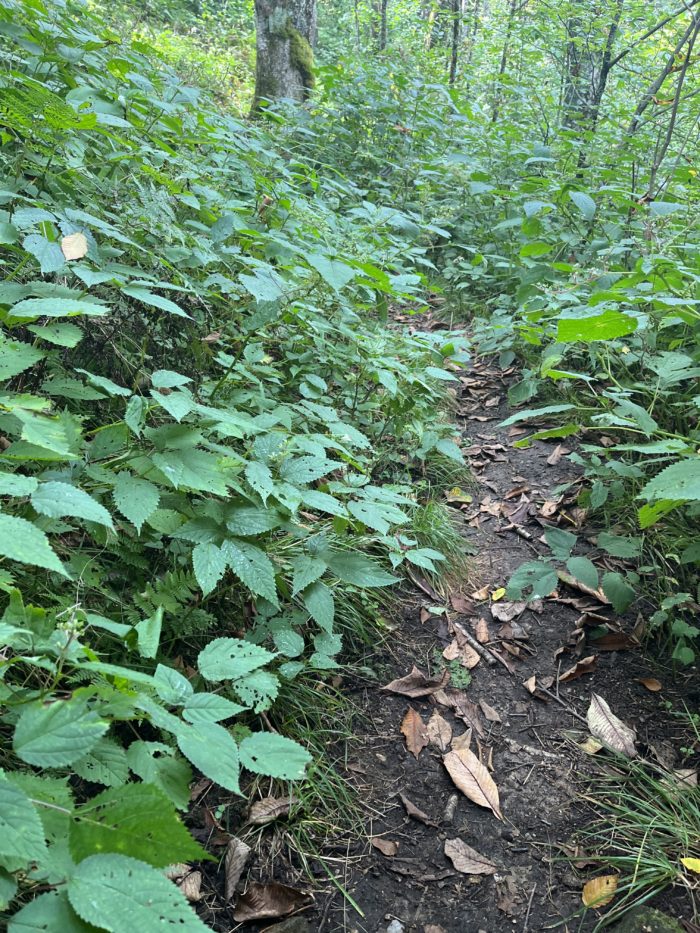 So by the time I arrived at Bald Mountain Shelter I was tired and itchy.

More rain on the ridges

Day 137 started with a climb over Big Bald, which gave some adequate views despite a lot of clouds. 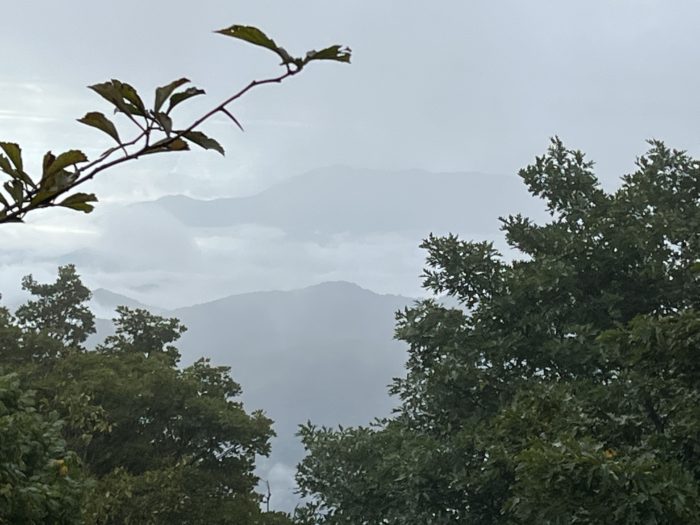 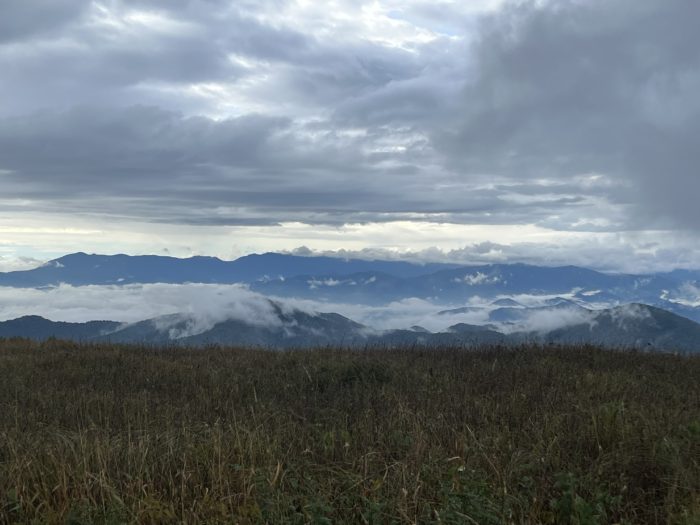 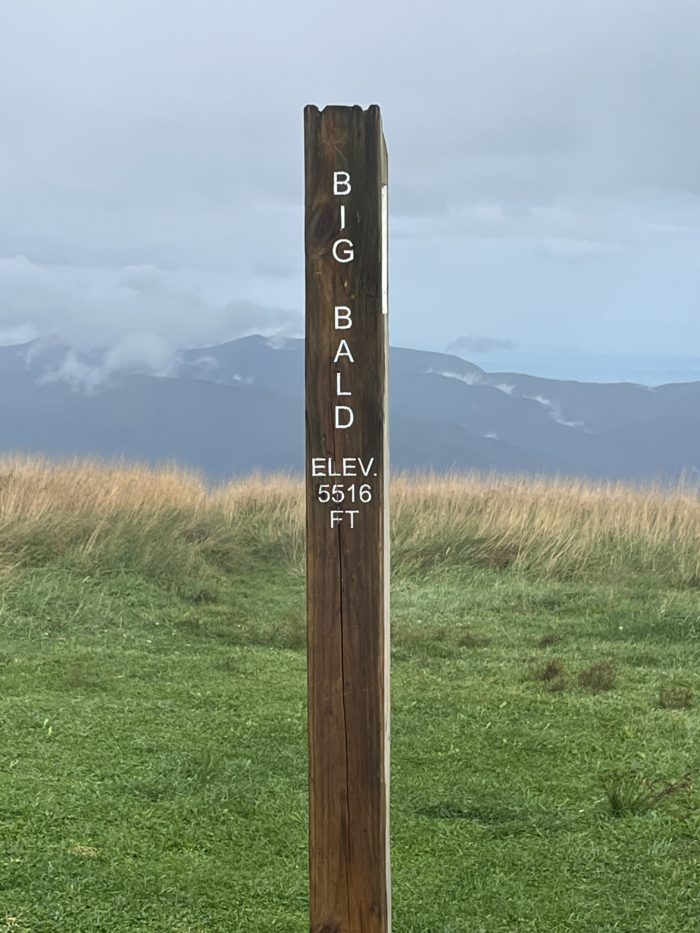 Unfortunately these morning clouds were a precursor to rain later that afternoon and evening.  It would extend into Day 138, taking away any views on the ridge I’d hike for most of the day.

I liked Big Butt and I cannot lie

Yeah, I couldn’t help myself – as I scaled the peak called Big Butt I felt compelled to write that heading.  But I have to tell you, these southern peak names just beg to become 5th grade humor!  I mean, Big Butt simply follows Hump Mountain and Big Bald on the trail!  I’m pretty sure that I’d find Sweaty Bald some where in the area, too (or is that Schweddy Bald, Alec Baldwin?)

You couldn’t mess that way with the mountain names in New Hampshire.  How can you make humor out of Mount Kinsman or Mount Garfield?  The latter was named after a president who was assassinated – there’s just no humor to be squeezed out of an assassinated man!

Anyway, if you thought that you wouldn’t like Big Butt the local trail builders at least provided another option: 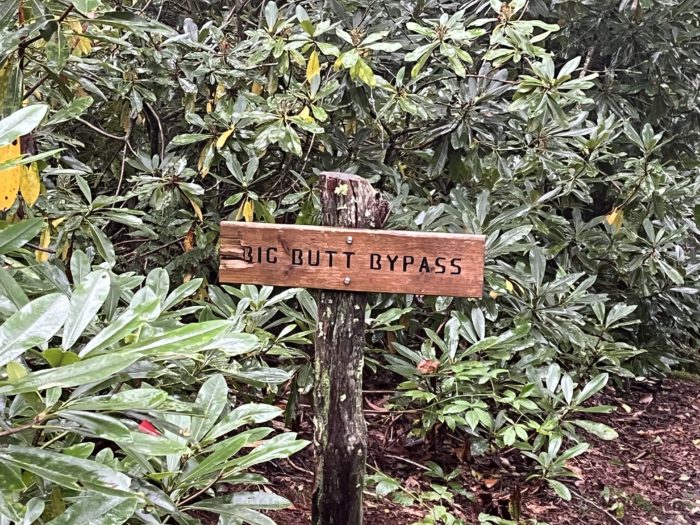 I really couldn’t make this stuff up, my dear readers!

Despite the rain wiping out views on the ridge, my Most Memorable Moment of Day 138 was the mile plus of the “Exposed Ridge Trail”.  The rocky up and down path is not recommended to be hiked in bad weather- but hey, I’m not coming back anytime soon- so I took it on. It reminded me quite a bit of rugged New Hampshire ridges, and that absolutely made my day!

A stealthy finish to the day

I’d wrap up Day 138 by finding two adequate trees near a trail junction and setting up my hammock tarp to just escape the downpour that persisted that afternoon.   I’d be dry as I slept, but the rain was relentless.

At 5 AM I was awoken instantly by one of the loudest forest sounds I’d ever heard.  It sounded like a building collapsing!  I can only guess that a tree completely gave way due to the rain, crashing down a slope.  I packed up gear soaking wet in the morning with no idea where the 5 AM crash had occurred.

A surprising trip into Hot Springs

Despite the rain and dense fog I was jacked up on Day 139.  You ought to know by now that town food and beer will do this for me – but it was also the night of my league’s fantasy football draft.  My son Ben took the reins of the draft planning for me while I was on trail this year, but I’d be connected via Wi-Fi at a hostel!  After all, this was no fly-by-night operation; it was the 20th season for our league, and my team is the current league champion!

The trail route into town had some big surprises.  About six miles in I rounded a trail corner to find a guy dressed in camouflage leaning against a tree with a scope rifle across his chest!  I stopped and said “Whoa!” when the tree appeared to move, then he said “Whoa!” too.

I cautiously approached and said “What are you hunting?” He looked at me with a greasy smile and said “Squirrels”.  I didn’t think it was the time or place to ask why he was hunting on the AT, or why he was assuming a Call of Duty pose to hunt a tiny foot long animal.  So I just high-tailed it out of there, fully remembering why I chose my shirts and jackets to be either blaze orange or red.

I’d also get far away and extreme close up views of a very bloated and angry French Broad River.  From high above, the muddy river was the color of French Roast. 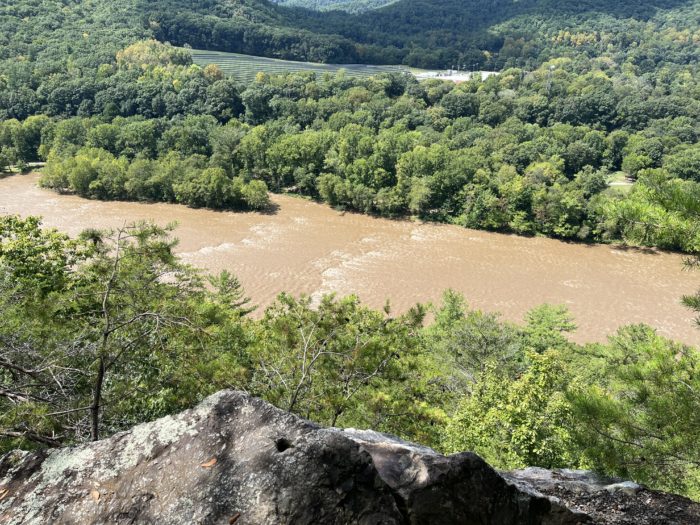 Up close, I saw an amazingly powerful current engulfing trees on the swollen banks. 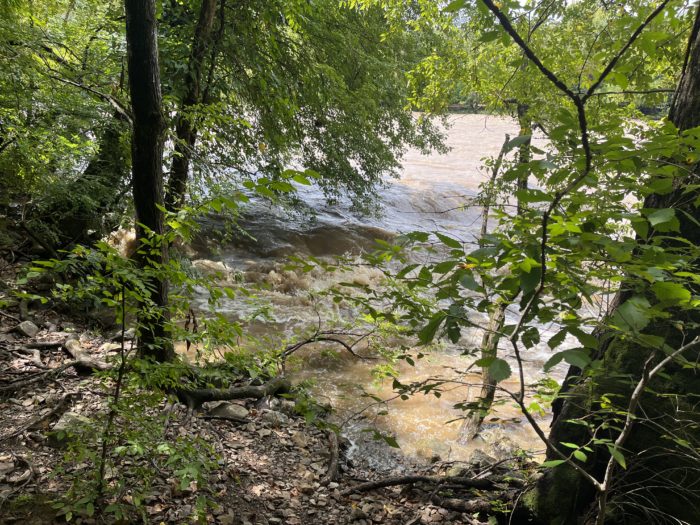 But soon enough, I’d be in town – and even though my first two choices for a burger and beer would be closed (Tuesday) – I’d find a couple of places open. 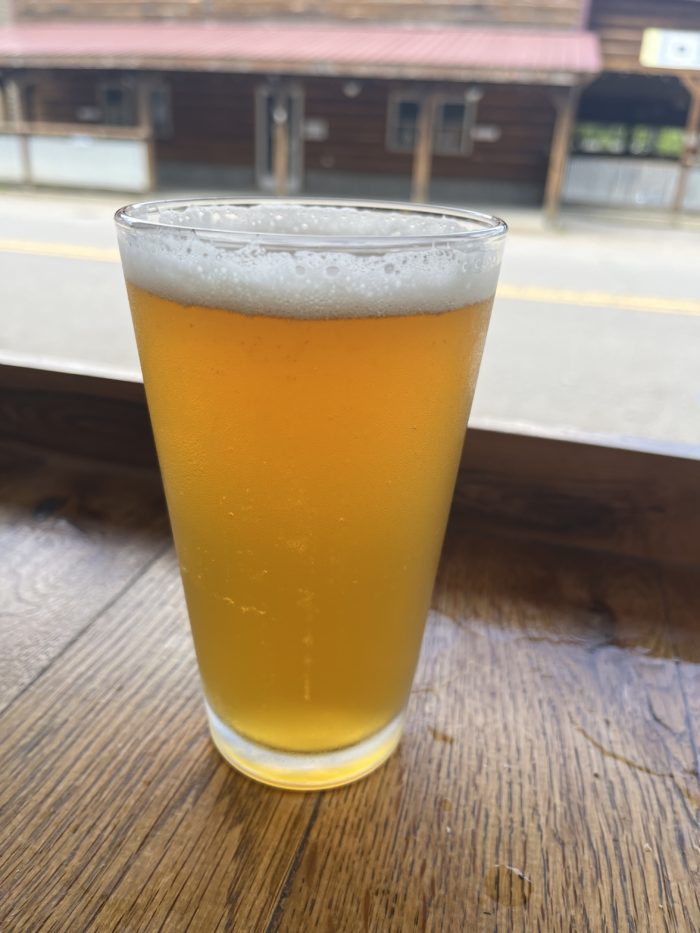 I had a couple of IPAs from Foothills Brewing in North Carolina that I thought were very tasty.  Also, the Big Pillow taproom in town had some excellent offerings.

I’d ultimately end up at Laughing Heart Hostel to dry my stuff, resupply in town, and “advise” for the FFL draft.

It was a great ending to a challenging four day segment, and I was seventy miles closer to the end of my trek.  Springer Mountain was awaiting my arrival less than 300 miles away.