AT Part Three: Back to Tennessee

The old man trudged into camp just before sunset. He was accompanied by a rotund pug and a chihuahua that looked to be about the age of 90, in human years.

“So how many times have you hiked the AT?”

“I SAID, HOW MANY TIMES HAVE YOU HIKED THE TRAIL?”

After a painful round of questioning, we determined that the man had done a lot of hiking. The chihuahua alone had already thru-hiked the AT… twice. 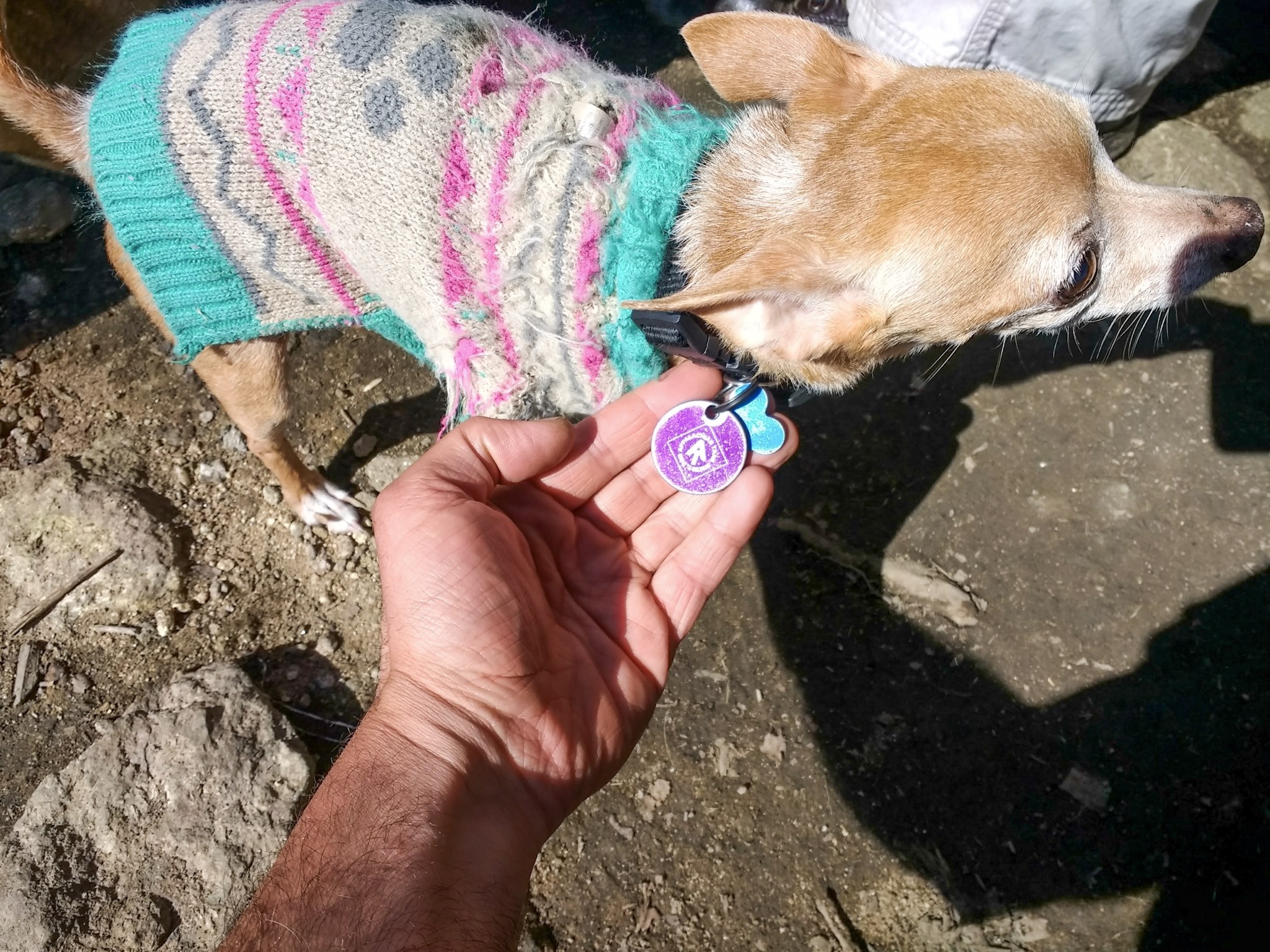 The man pulled out a skillet and fried up an enormous steak, which he generously shared with everyone gathered around the campfire.

He fed the scraps to the dogs, crawled into his sleeping bag, and immediately dozed off.

Drying Out at Standing Bear 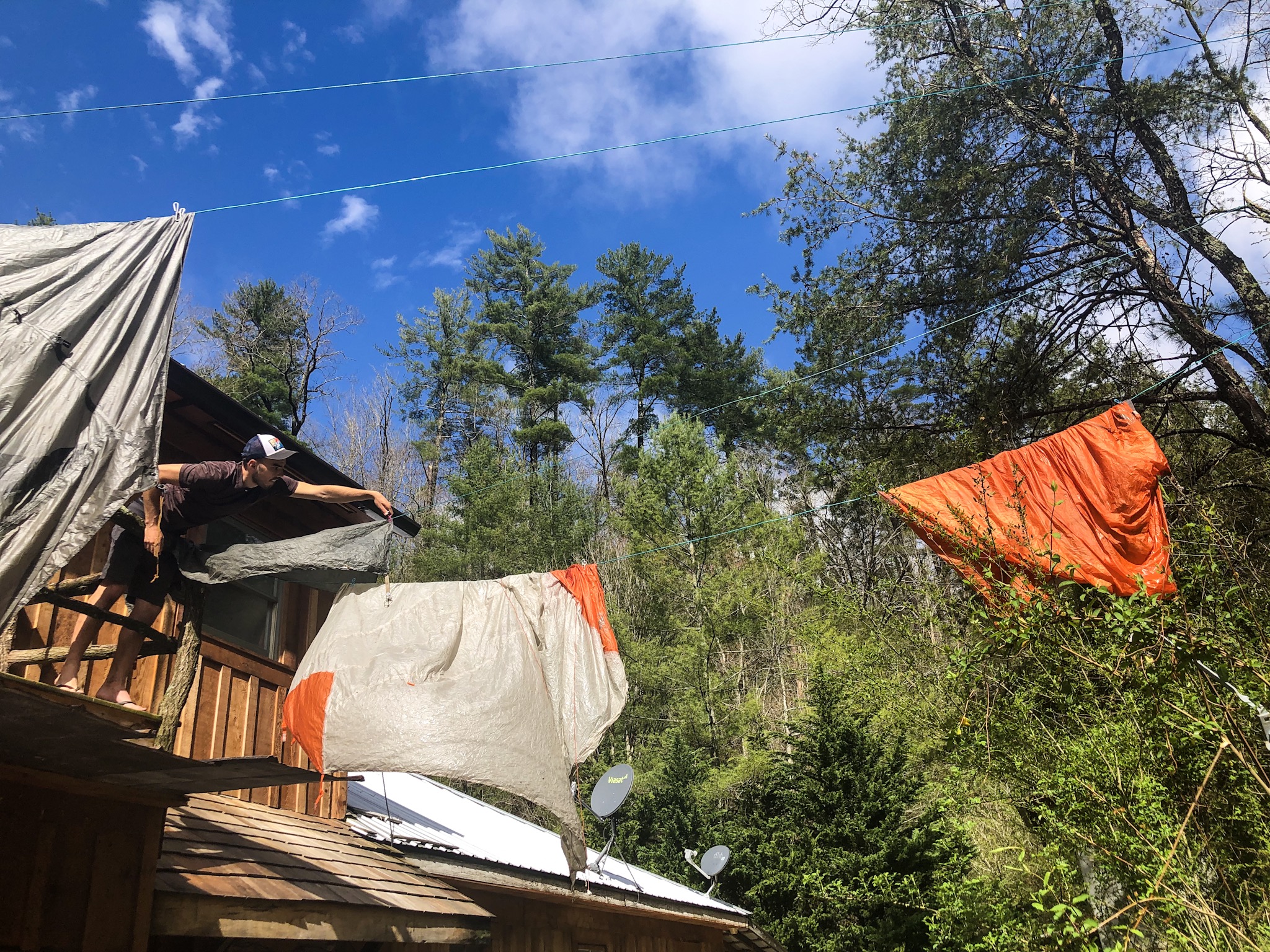 After spending several days getting soaked in the Smokies, walking into Standing Bear Farm was akin to entering the gates of paradise. There were mountains of breakfast burritos and rivers of hot coffee. Clotheslines to dry sopping wet tents. A gentle stream to soak one’s feet and wash away the aches and grime of the past 72 miles.

The hikers fiddling with a guitar around the fire pit might as well have been singing Kumbaya.

The quaint resupply store at Standing Bear ran totally on the honor system. You simply wrote down anything that you placed in your basket, tallied it up, then paid Jack—head of operations—before you left. 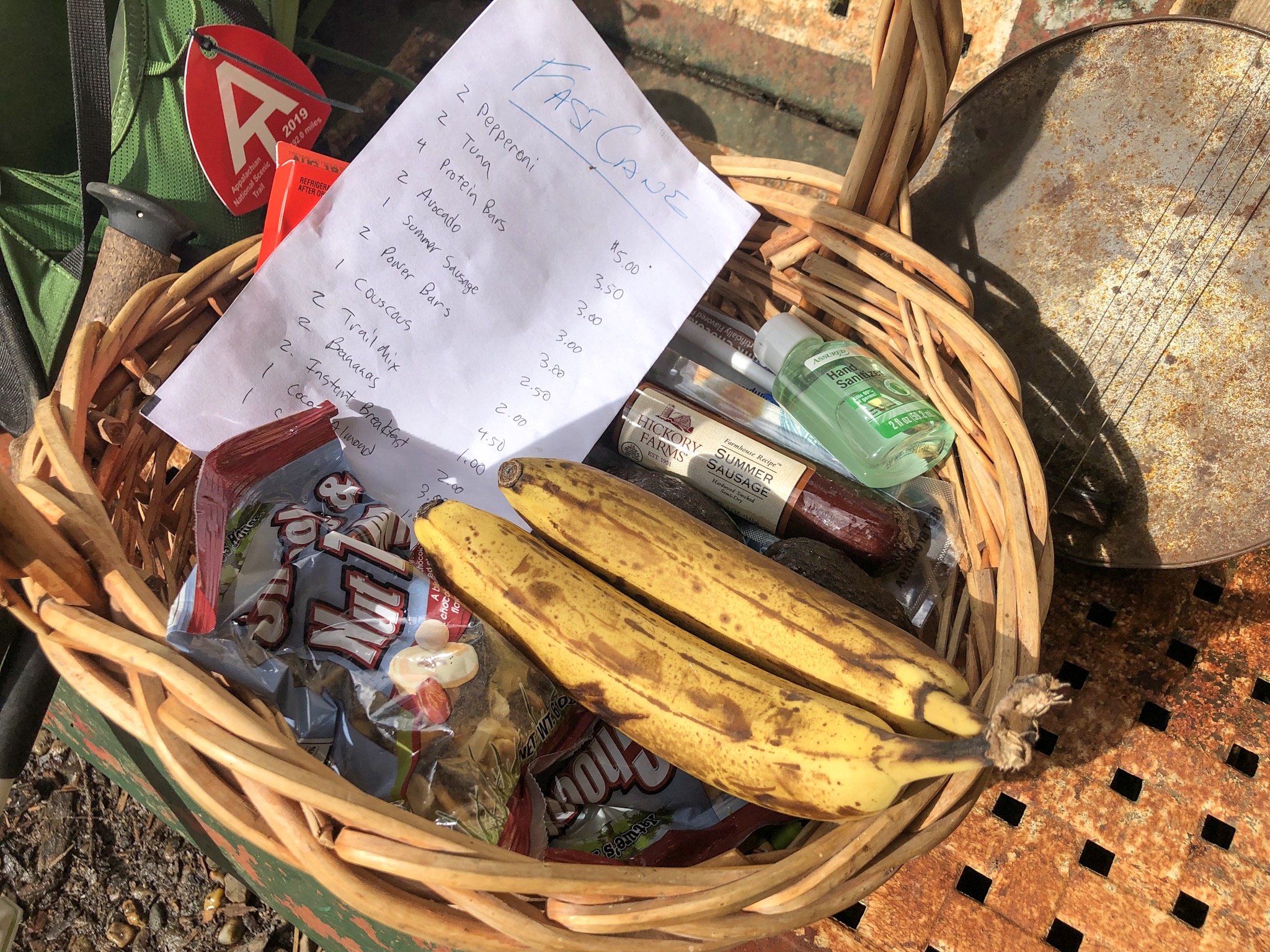 The temptation to stay at the hostel for the night was strong. But with the promise of taking a zero in Hot Springs shining in the distance, we decided it would be best to be on our way.

We crossed back into North Carolina for what ended up being a beautiful few days of hiking. Tiny white wildflowers lined the trail for miles, looking almost like a dusting of snow. Steep climbs led to grassy balds that provided panoramic views of the surrounding mountains. 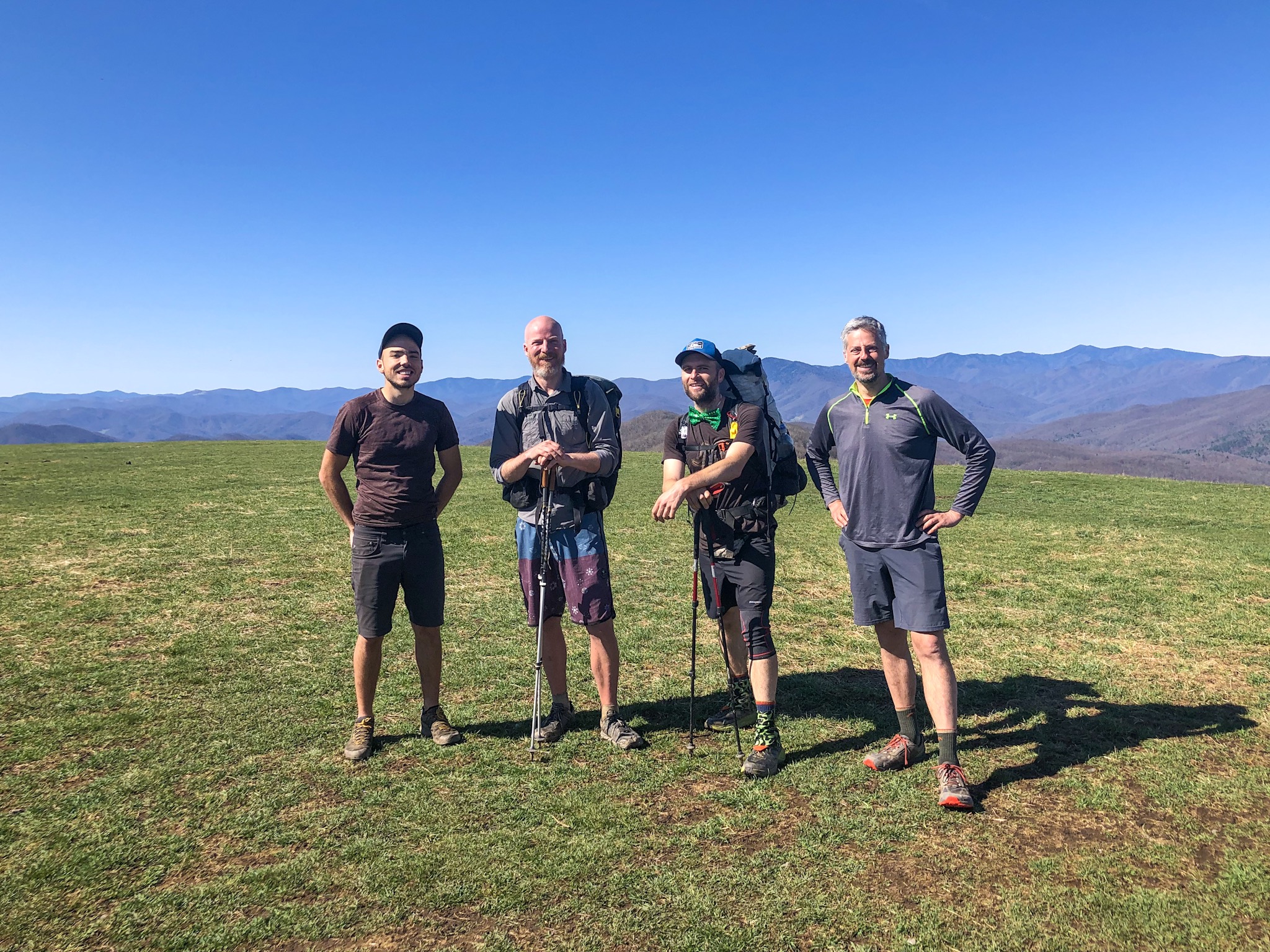 By the time we reached Hot Springs, we had covered 275 miles in less than three weeks. We thought we deserved a rest day.

As Clammy so elegantly put it, “Even God took a Sunday off.”

The Zero That Wasn’t 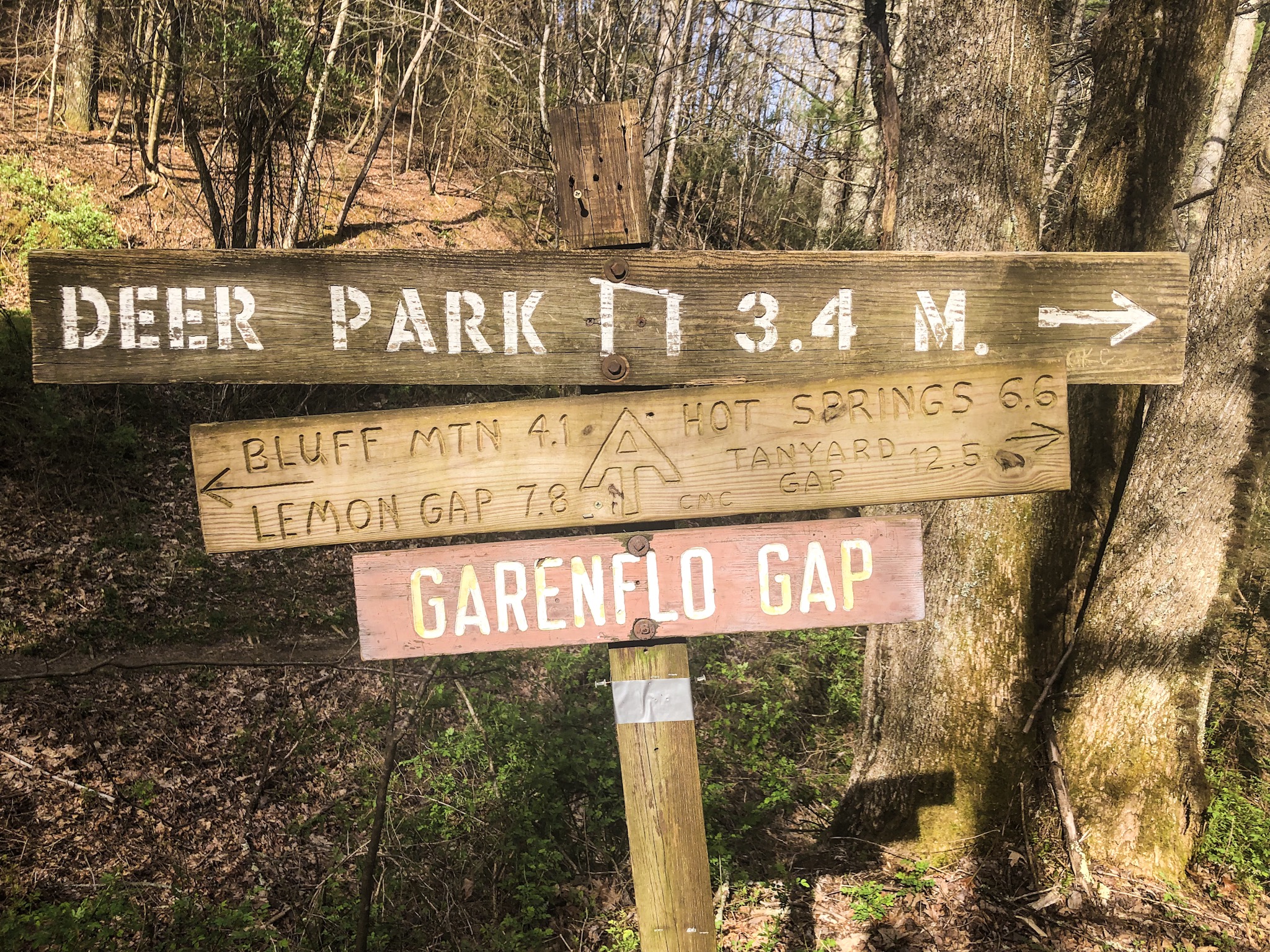 In Hot Springs we performed what had become our town routine: immediately find a restaurant and attempt to eat all the food in said restaurant, do some laundry, take a shower, and resupply.

Instead of paying for an extra night’s stay at a hostel for our highly anticipated zero day, we thought it would be more cost-effective to hike a mile out of town and set up our tents along the bank of the beautiful French Broad River. 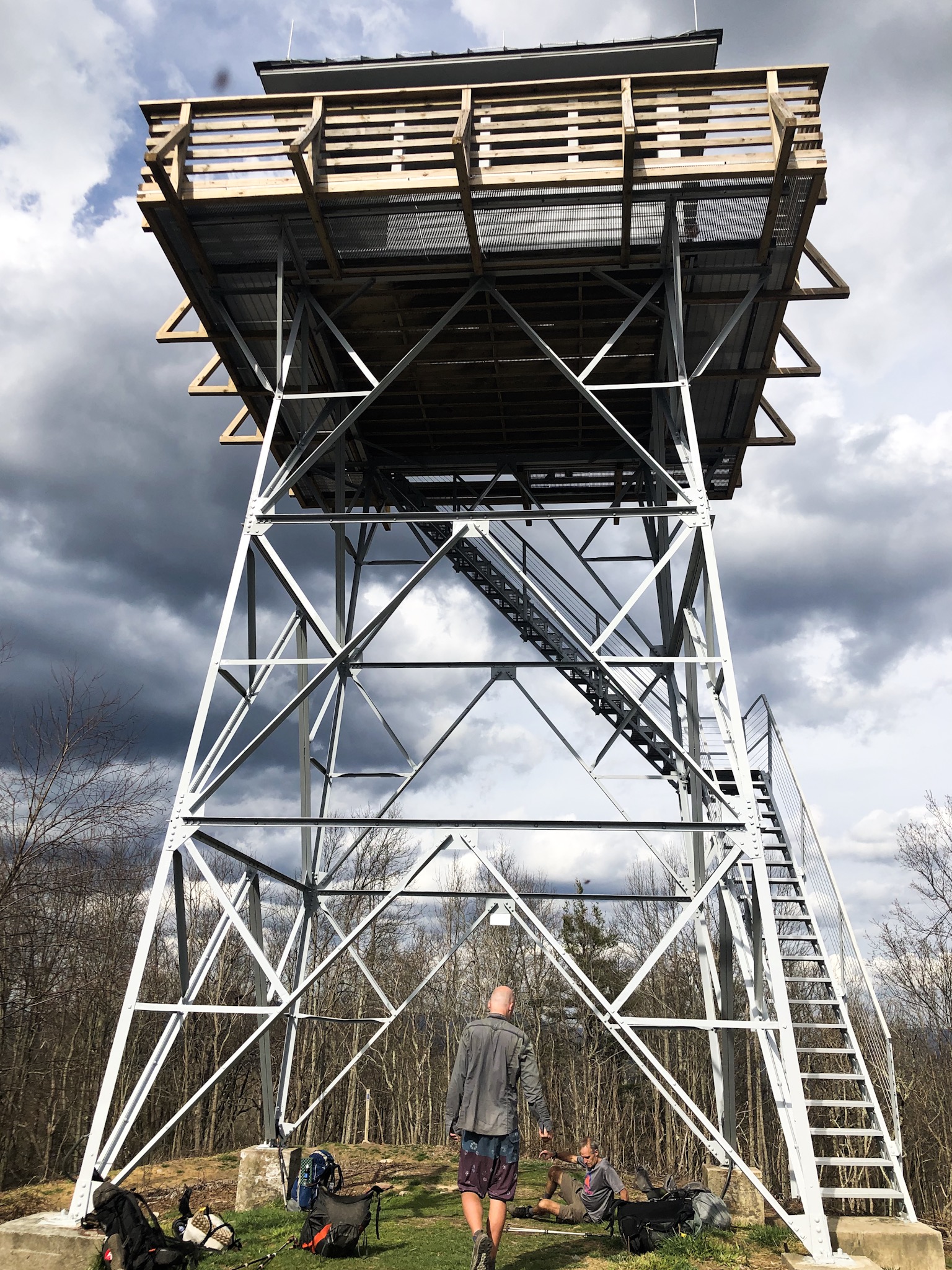 One mile quickly turned into two, which then somehow turned into 12. Before we knew it, we were very far away from Hot Springs and had put in a solid day of hiking.

We were obviously in good shape physically and mentally. Our illustrious zero would have to wait for another day. 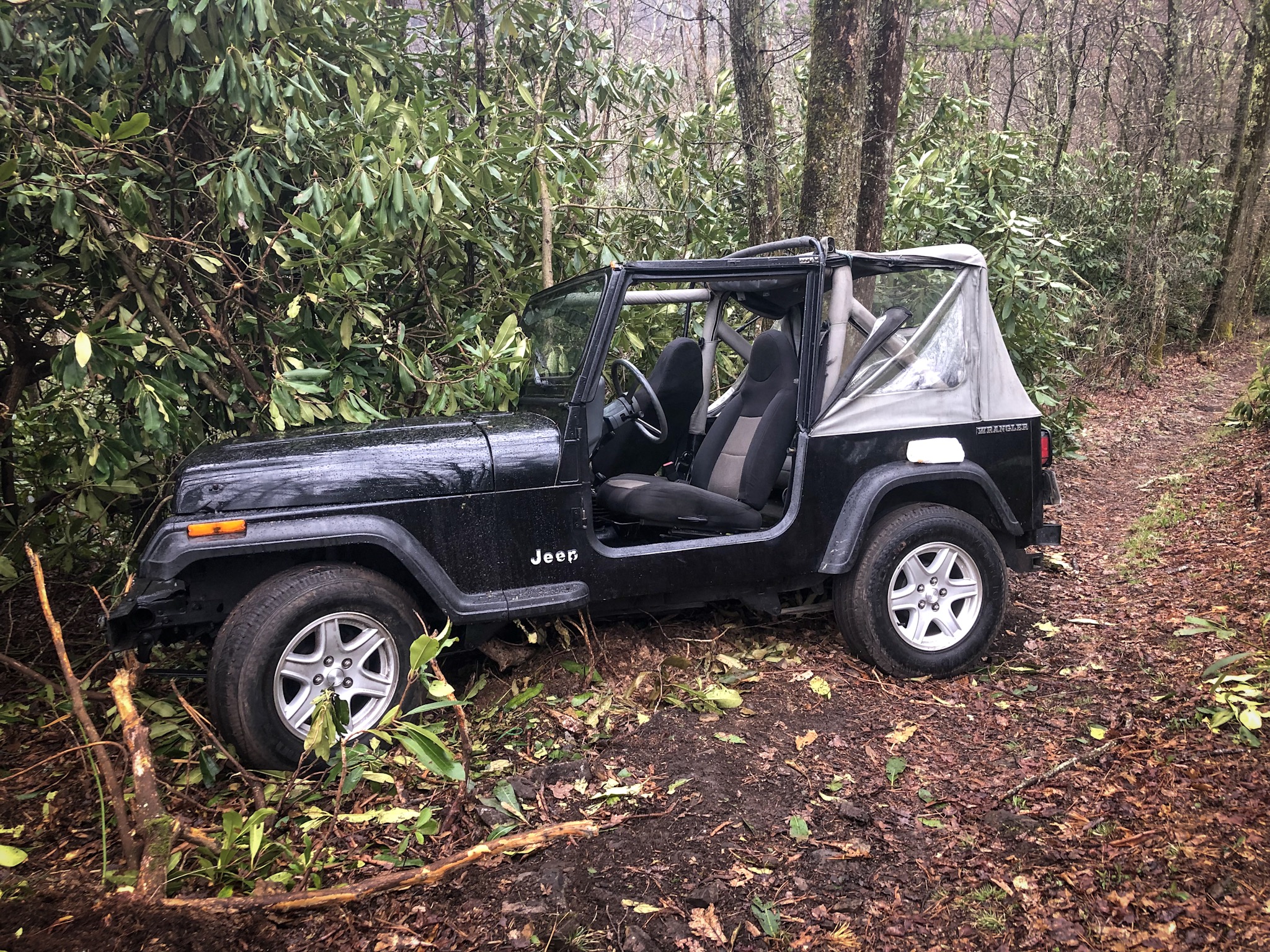 Miles from anything that could be considered a road, I came across the strangest sight on the trail to date: a Jeep Wrangler.

It was parked in a rhododendron bush with the top ripped open and puddles on the floor. I later found out from some fellow thru-hikers that the owners had shown up at a shelter the previous night. They were wet, freezing, and intoxicated.

Apparently they thought it was a good idea to test out their new Jeep by driving down the Appalachian Trail. The Jeep got stuck. 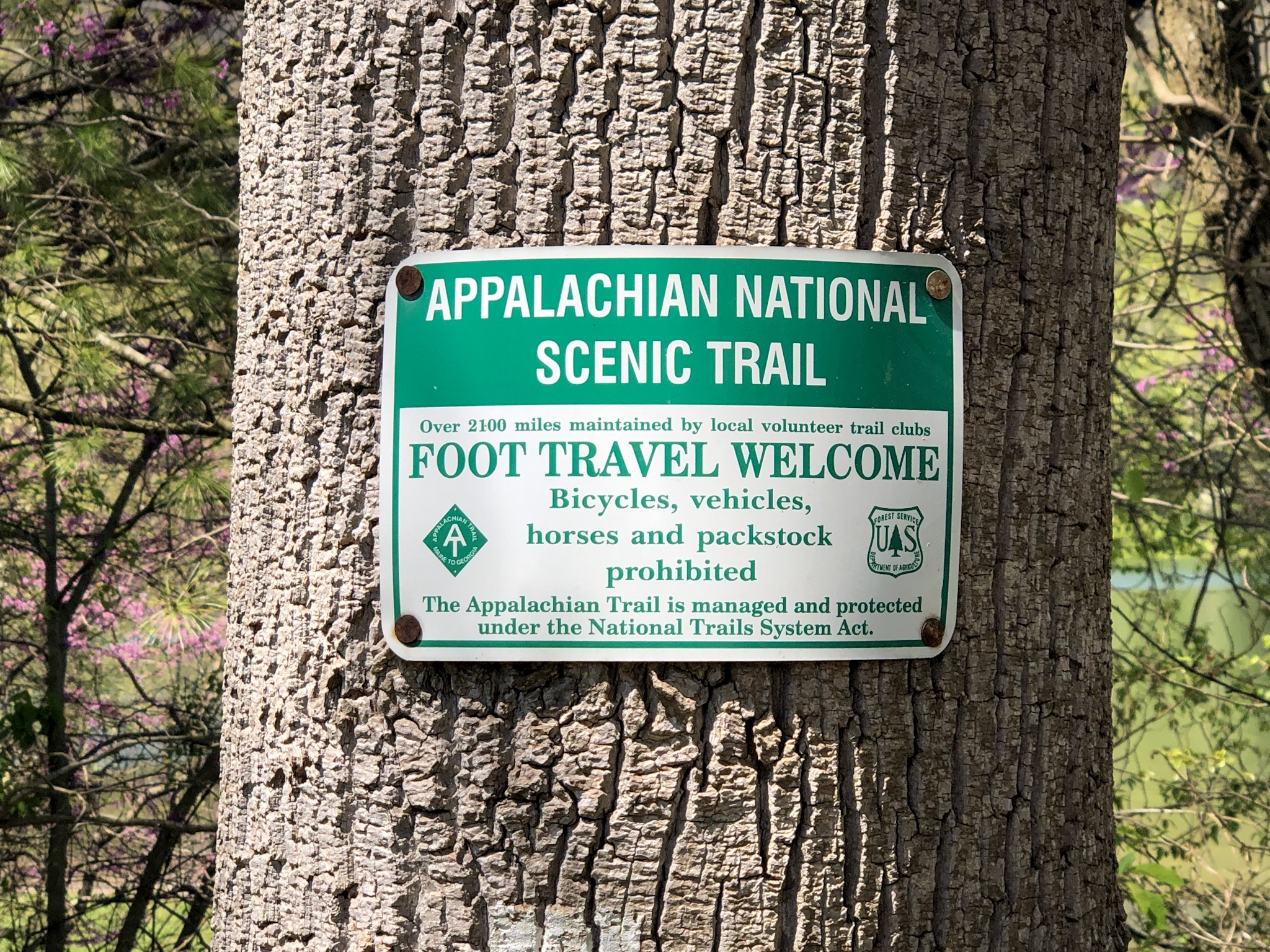 Park officials had been notified and were currently figuring out how to get the vehicle off the trail.

If anything, the incident was a good reminder that the AT is intended for foot travel only.

There Are No Boundaries 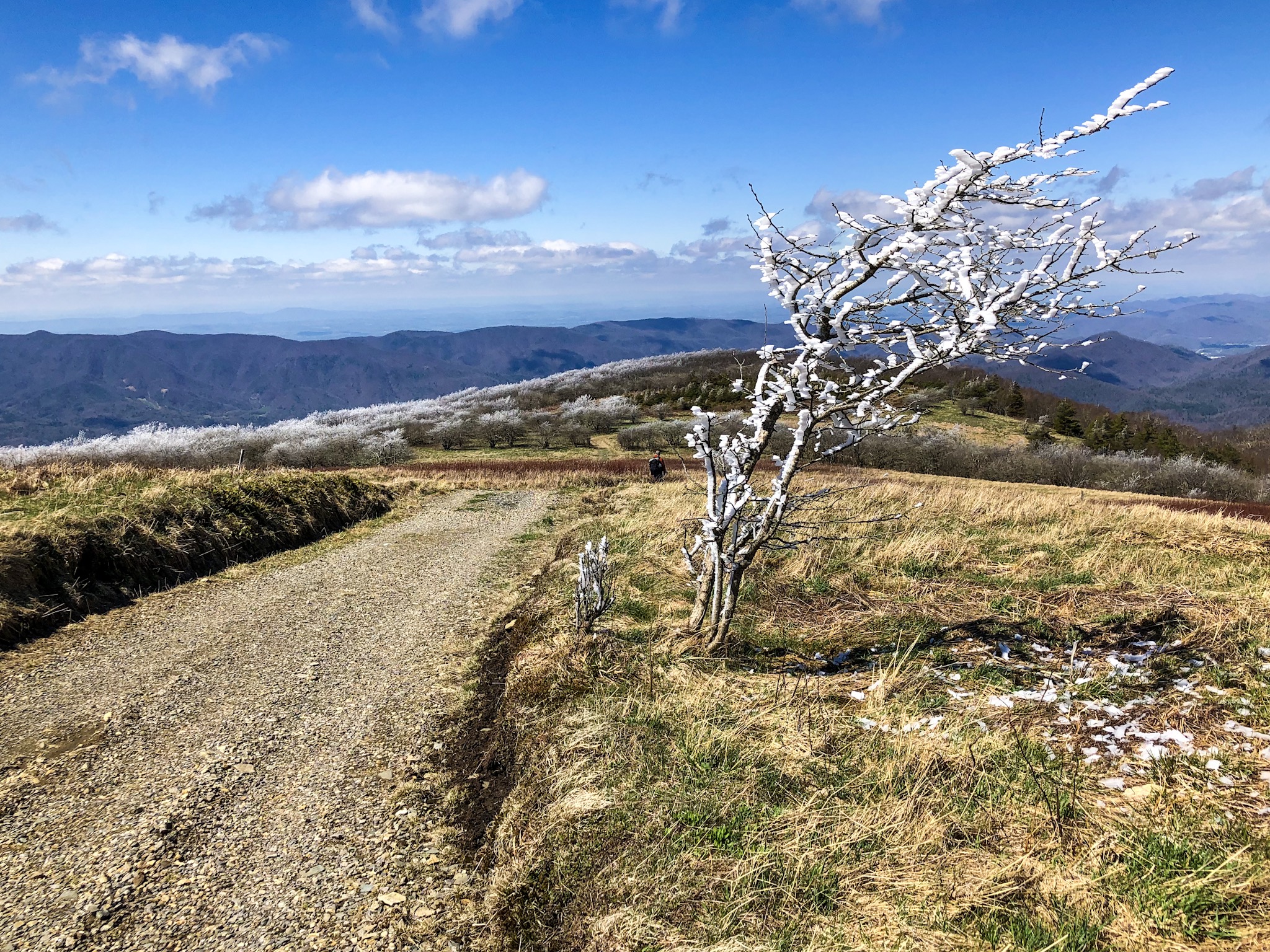 From Davenport to Doll Flats, the Appalachian Trail flirts with the border of North Carolina and Tennessee. I’d start out in one state, walk a few miles in the other, then end up in the original state for the night.

I desperately wanted to be able to cross another state off the list, but at some point I realized that it really didn’t matter—the boundaries were manmade. 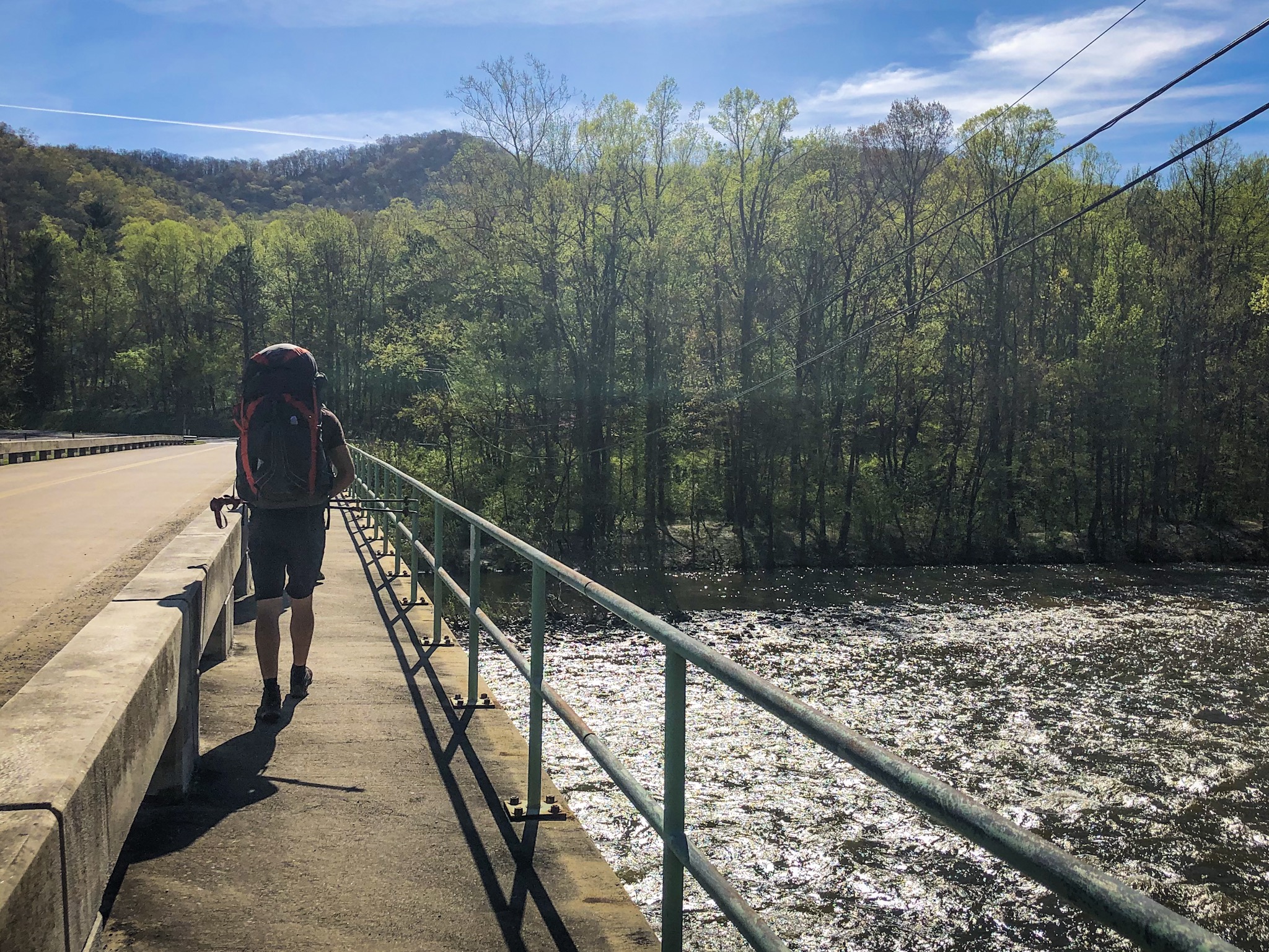 Some stretches of this section were gorgeous. I’ll never forget ascending Big Bald with its frosted treetops sending ice crystals to the ground whenever the breeze picked up, or looking down upon the picturesque Nolichucky River and town of Erwin. 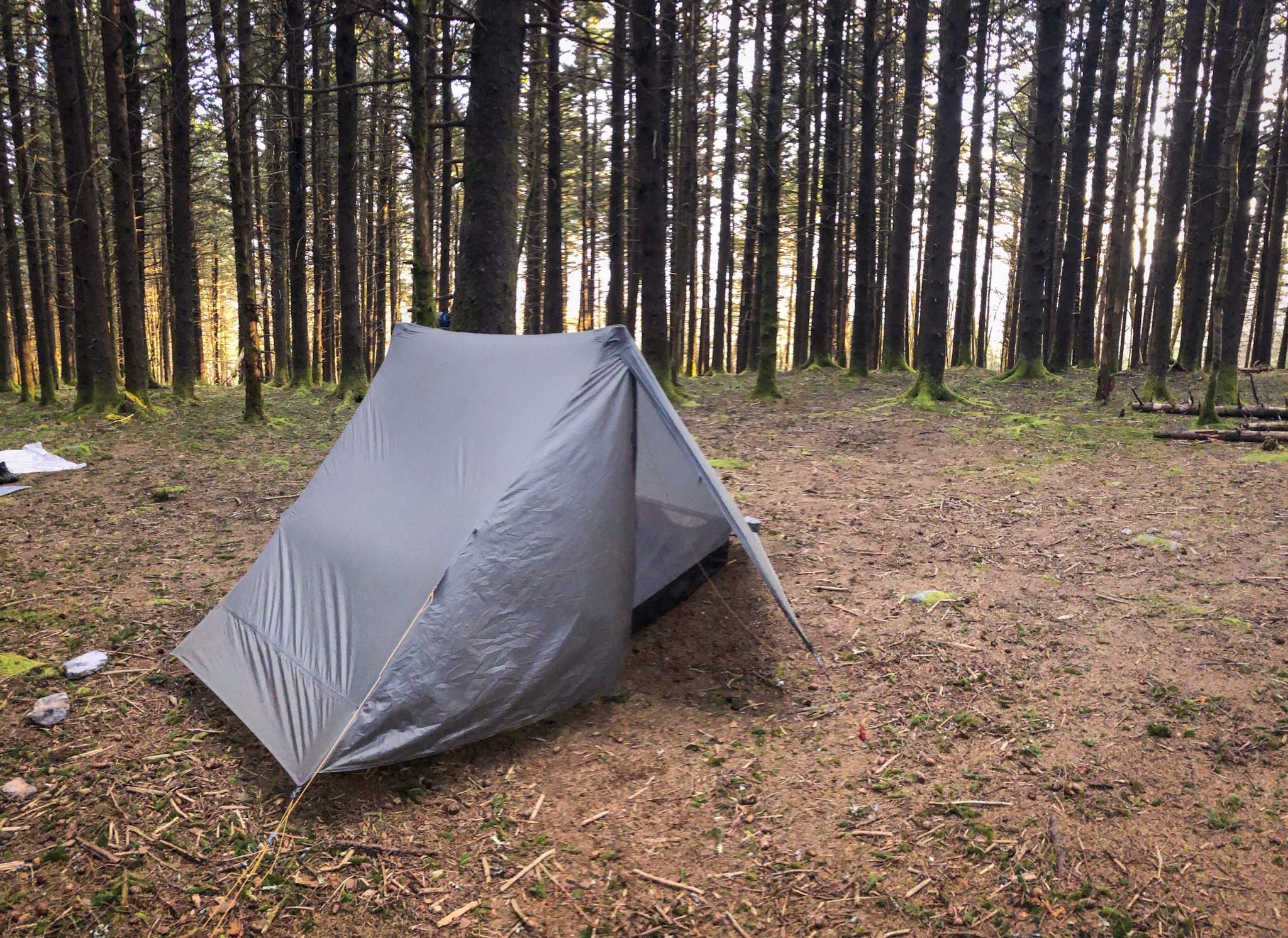 Other parts were tedious. Many mornings started off extremely cold, wet, and windy.

Contracting a 24-hour stomach bug didn’t make the ascent up Unaka Mountain much fun. The mystical pine forest on top of the mountain, however, ended up being one of my favorite camping spots on the trail so far.

Thunder on the Mountain

The climb up Roan Mountain began innocently enough. A warm afternoon sun shone on my back as I made my way up the long series of switchbacks. The hillside was littered with wild ramps. I started daydreaming about all the tasty things that I could cook with them.

Shortly after the summit, I met up with Clammy and UNICEF at Roan High Knob Shelter for the night. I never had a chance to say goodbye to Valley Forge, who had continued on to catch a shuttle from town the next day.

Due to time constraints, his hike had come to an end just 75 miles shy of his goal of Damascus. Valley will undoubtedly be completing his section hike of the AT very soon.

Later that night the weather hit. 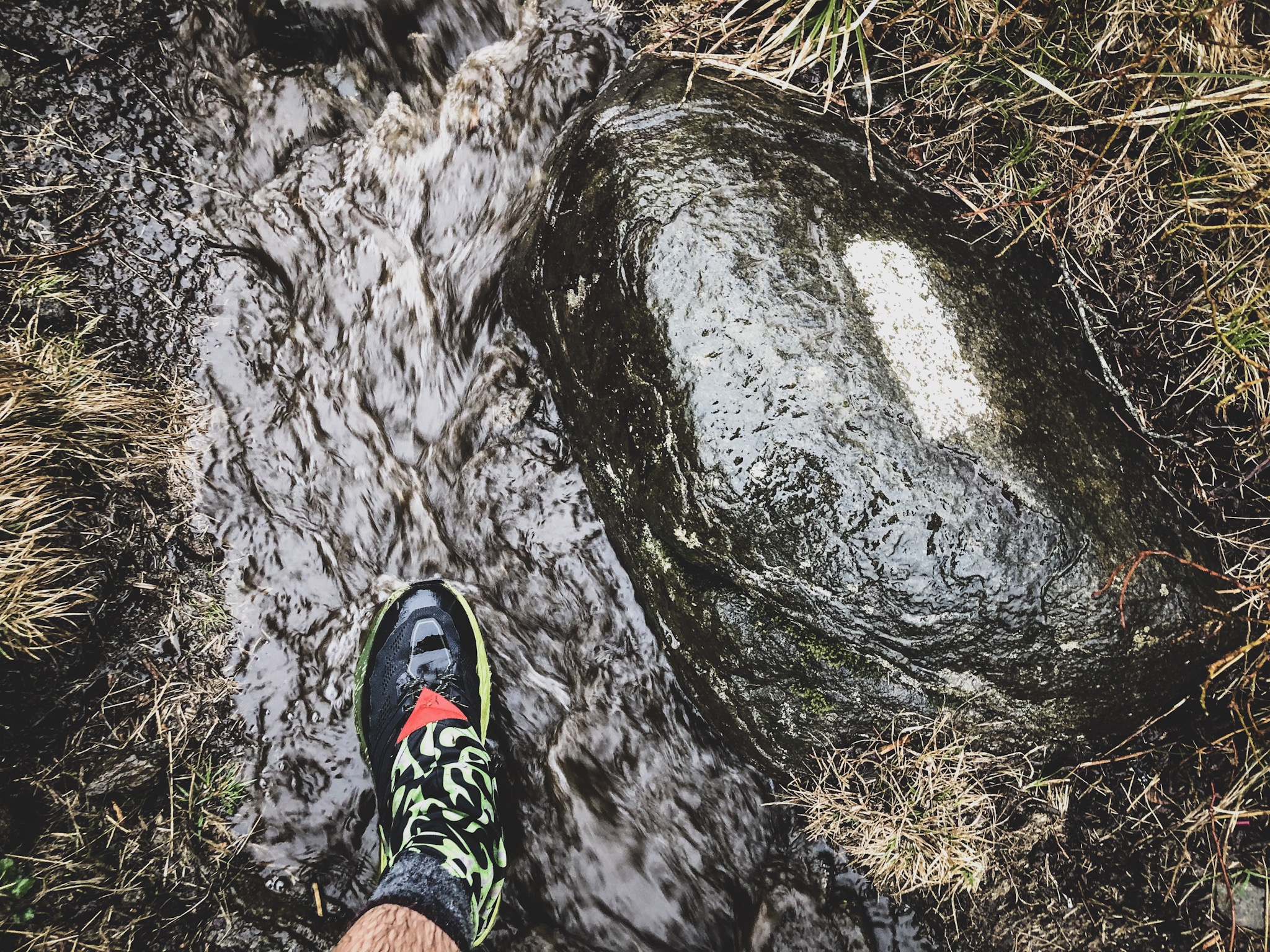 Over three inches of rain fell during the next 24 hours, transforming the trail into a gushing river.

As I ascended a bald in driving rain the next morning, I saw a flash. Before I could register what it was, a deafening boom resonated across the mountains.

Standing in a river on a treeless ridge holding two metal poles was suddenly the last place I wanted to be. 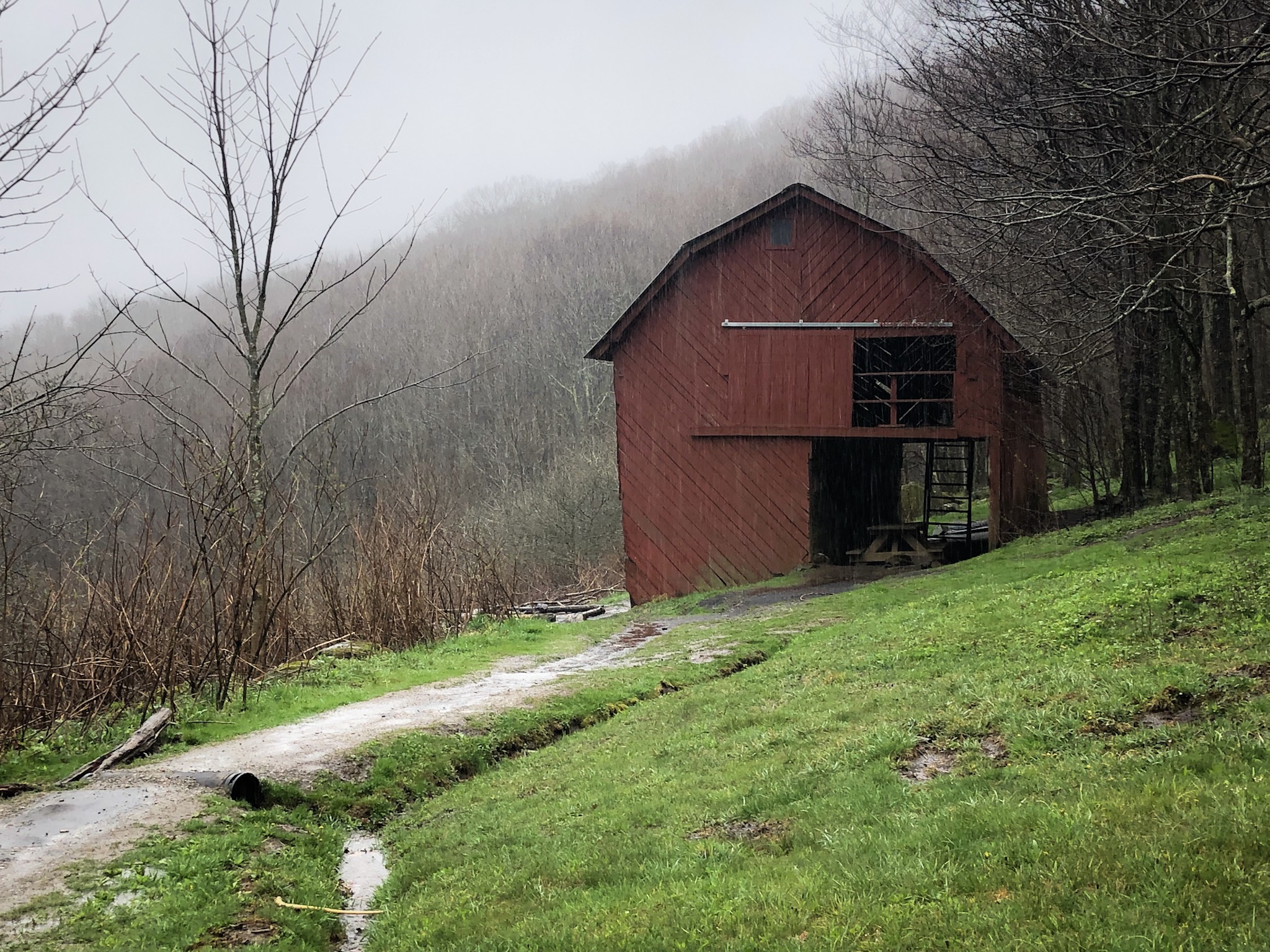 Cracks of thunder continued to sound as I hydroplaned down the trail. Clammy and UNICEF, who apparently had the same reaction as I did, sprinted past me. At one point I took a brilliant spill into some thick mud.

We found refuge in Overmountain Shelter, an old converted barn that could hold up to 30 hikers.

My partners decided to stay put for the night. With the rain starting to subside, I made the decision to keep going. I had a package waiting for me at the Roan Mountain post office and wanted to get there before it closed for the weekend.

On the next exposed ridge I experienced more forces of nature. Sustained 60 mph winds knocked me to the ground a few times. Raindrops darted at me sideways, penetrating any exposed skin like tiny needles.

Yards began to feel like miles. I started running again. 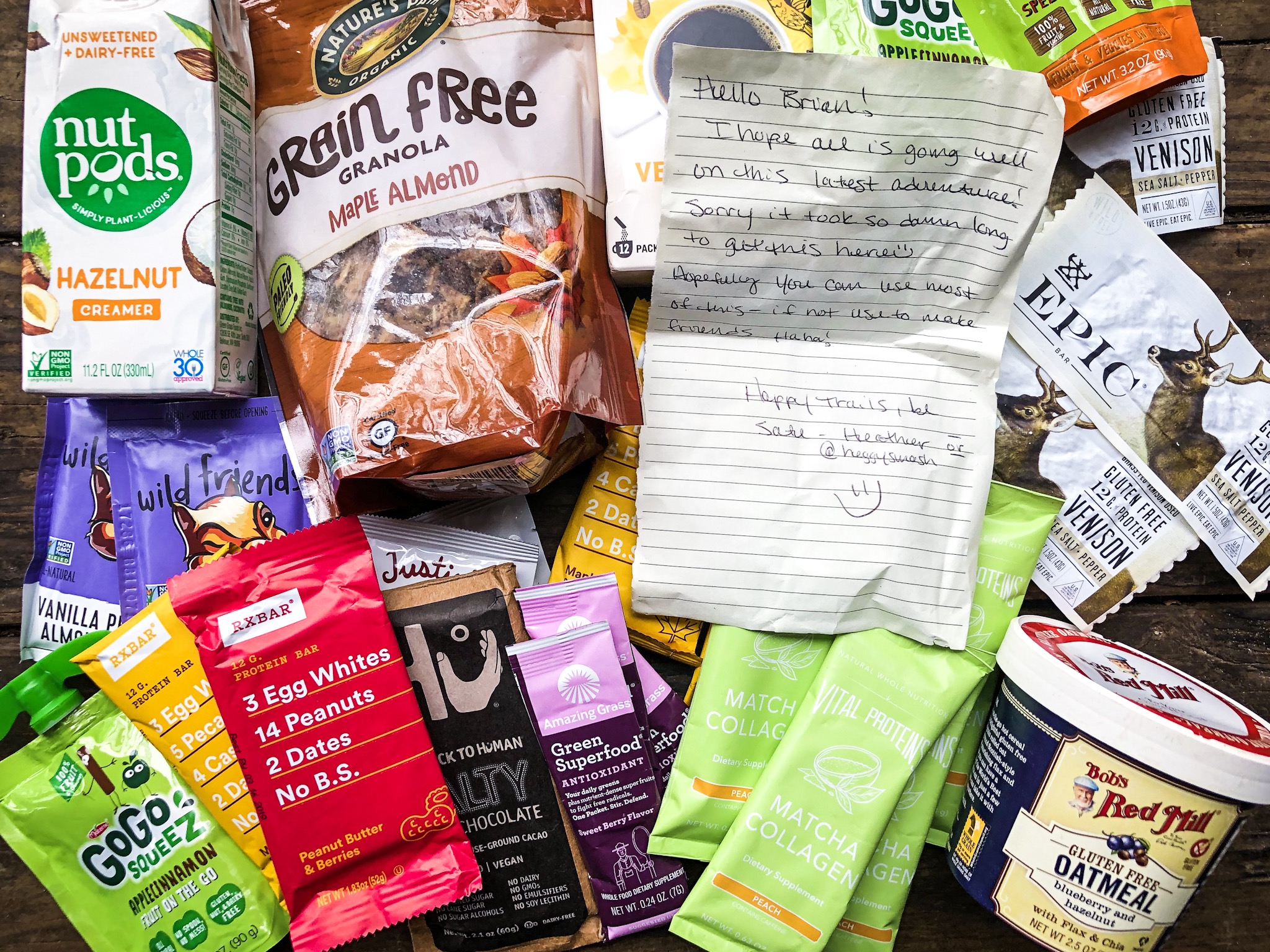 I still think this awesome mail drop was worth the harrowing trek.

Several hours later I was sitting safe and dry in front of the fire at Station 19E Hostel with a care package at my feet. My experience on the ridge almost felt like a distant dream.

While I knew that I shouldn’t be concerned about state boundary lines, at that moment it felt really good to be back in Tennessee. 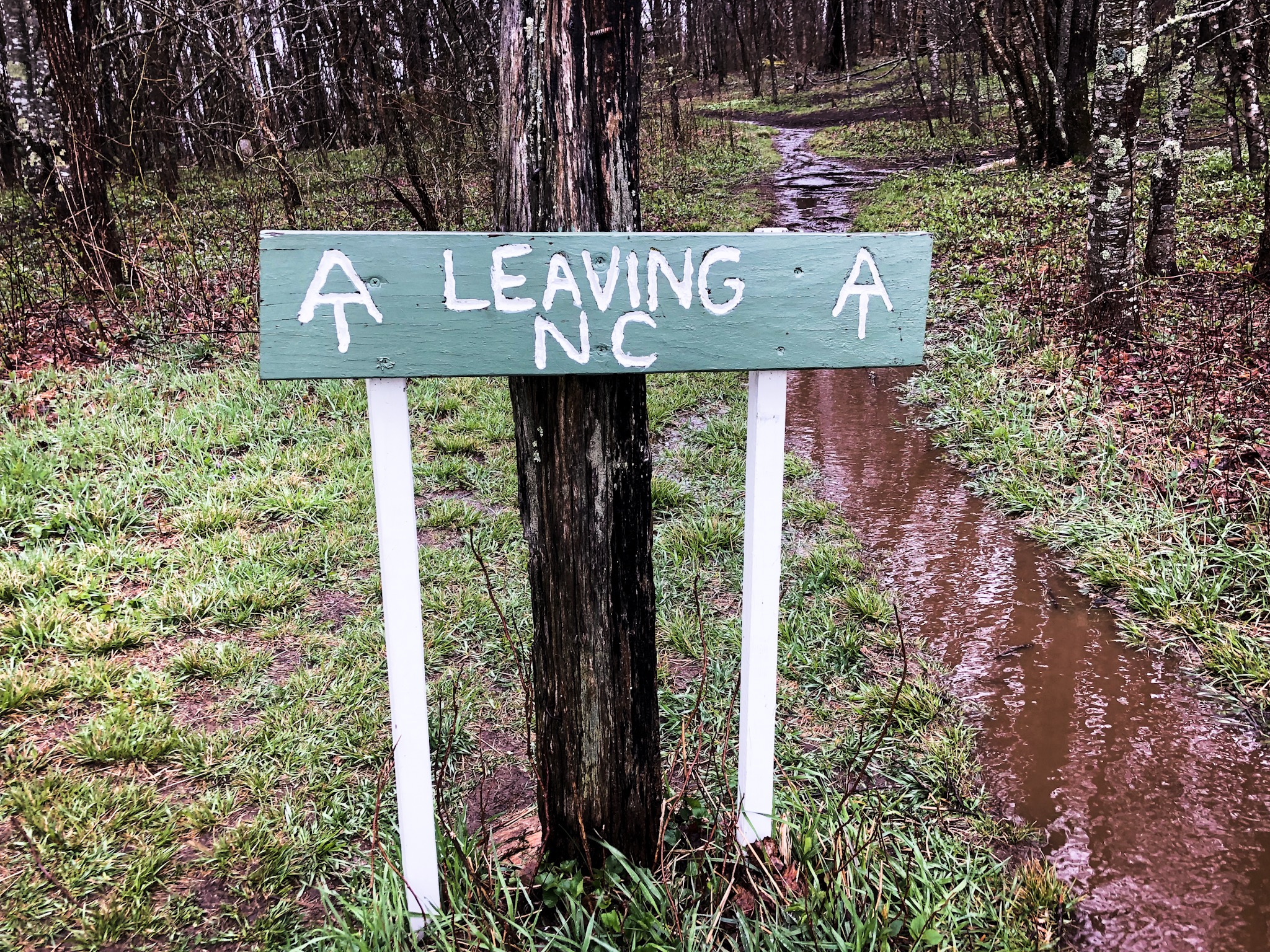