The Appalachian Trail Conservancy this week denied a request to release the full text of its August 2020 “voluntary stewardship agreement” with Mountain Valley Pipeline, LLC, the company overseeing construction of a 303-mile natural-gas pipeline that will cross the Appalachian Trail near Pearisburg, Va.

Opponents of the pipeline delivered a petition signed by more than 400 “ATC members, volunteers and/or Trail supporters” to ATC President and CEO Sandra Marra and the board of directors Feb. 16.

On Monday, the ATC informed the petitioners that it would not make the agreement public.

“As a matter of ATC’s policies, standard philanthropic practice, and for reasons that have been previously discussed, the voluntary stewardship agreement with the Mountain Valley Pipeline and The Conservation Fund is private,” the ATC said in a statement, which included a link to the August announcement of the agreement. 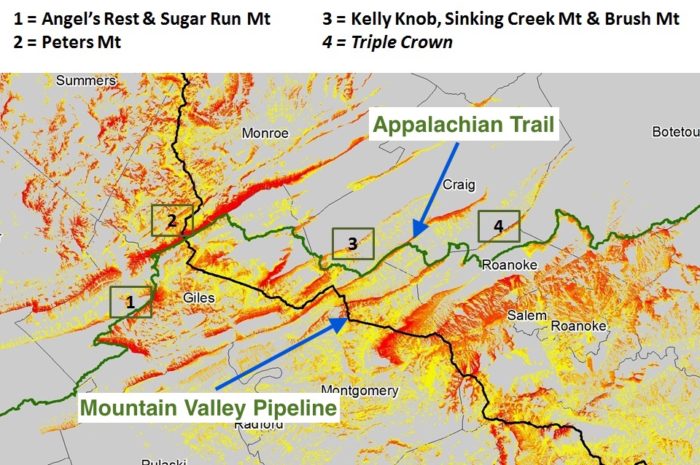 A map showing the proposed route of the Mountain Valley Pipeline in Giles County, Virginia.

Under the agreement, MVP committed up to $19.5 million “for use by the Conservancy to conserve land along the Trail corridor and support outdoor recreation-based economies in Virginia and West Virginia,” according to the ATC.

“The ATC’s actions are a truly grotesque departure from their public ‘Identity Statement,’ which claims the ‘Conservancy’s staff and board embodies honesty, mutual respect, openness, continuous learning and improvement, and excellence,'” ATC member Russell Chisholm said in a statement released Feb. 24. “Instead, the decision to enter into a Voluntary Stewardship Agreement and refuse to provide transparency about the decision inappropriately prioritizes the power of the Board over the wishes of ATC members and the public.”

In an interview with The Trek published Feb. 16, ATC Senior Regional Director Andrew Downs said that keeping the agreement under wraps was part of the initial conditions set for negotiations and revealing it now would damage the ATC’s credibility in future negotiations.

“To release an agreement, when we said we wouldn’t, could harm trust in us,” he said.

Downs said that MVP had already given “about half” of the $19.5 million. The full amount is contingent upon completion of the project, he said, but the ATC will keep all funds provided under the agreement.

Under the current plan, the pipeline will cross the trail 110 feet below the surface for about 600 feet. It also will run parallel to the trail for about 12 miles, four miles off the trail along the Virginia-West Virginia border north of Peters Mountain. 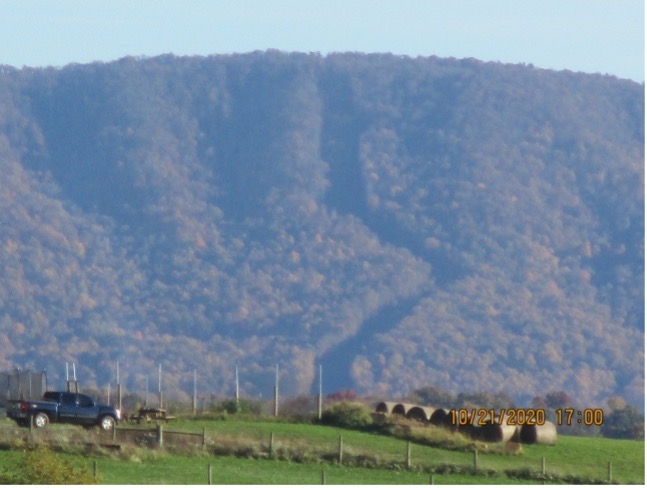 Maury Johnson, an ATC member whose West Virginia farm has been bisected by the pipeline, and who helped organize the petition, said that the private, non-profit ATC should be required to disclose the agreement, because it is partially funded by public funds.

It’s not clear whether the ATC would be required to release a private agreement to the public, since receipt of government grants does not necessarily subject organizations to public-information laws. In 2018, $2.4 million of the organization’s total income of $8.9 million, or about 26 percent, came from government grants.

In addition, Downs said the agreement includes information about potential real-estate purchases, which even governments usually are not required to reveal, since such information can affect ongoing negotiations.

If the ATC continues to refuse to release the agreement, Johnson said opponents are willing to pursue “every legal option.”

Johnson said he felt betrayed when he was notified of the agreement “literally five minutes” before it was publicly announced.

“We were working with them, trying to create the Peters Mountain Cultural Heritage Area. At the same time, the ATC was negotiating with MVP and never said a word to us,” he said. 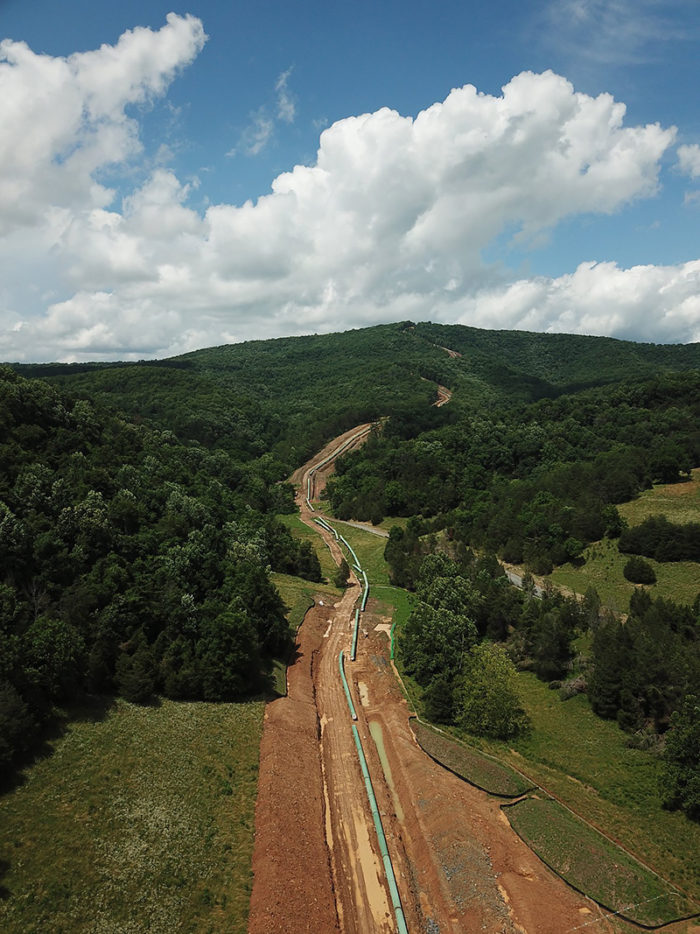 Johnson acknowledged that, “by themselves, the ATC was never going to stop this pipeline.” But he said the ATC’s decision to work with MVP sets a troubling precedent. He called the promise of $19.5 million “greenwashing.”

“This means that anybody that wants to can pay a small amount of money to take shortcuts, to come in and destroy viewsheds,” he said. “It’s influence buying.”

Downs said the ATC entered into the agreement to ensure the best possible outcome for the trail, regardless of what happens with the pipeline. The ATC will continue to participate in the federal permit process to minimize impacts to the AT, he said.

MVP announced Feb. 12 that it expects to complete work on the $5 billion to $6 billion project by the end of 2021, but that the pipeline will not enter service until sometime in 2022.

But opponents say MVP’s 2020 claim that the pipeline was 92 percent complete is exaggerated, noting that the company recently revised that number to 80 percent. One critic used public records to estimate that as of July, 85 percent of the project’s 303 miles had been “trenched” and 78 percent had been “backfilled,” but just 51 percent had been fully restored as required.

“This is not a done deal,” Johnson said.

He said  the “steepest, most difficult part” of the project still lies ahead. He believes MVP’s plan to bore under the AT won’t work, due to the geology of Peters Mountain.

“If that doesn’t work, I believe they are going to have to blast through the trail,” he said. 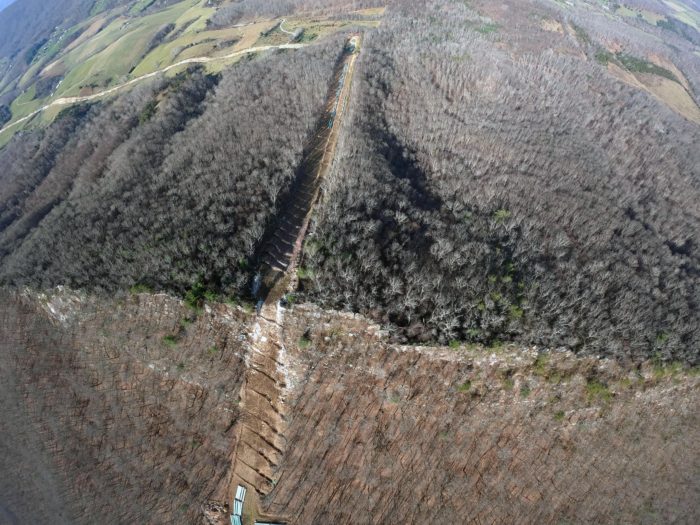 But Johnson is encouraged that the pipeline is facing an increasingly uphill battle. He expects Congress to approve the National Scenic Trails Viewshed Protection Act, which will provide new protections for the AT — and which the ATC helped develop and continues to advocate for in Congress, Downs says. Johnson also notes that the Biden administration’s effort to rejoin the Paris climate accord will raise further obstacles for the project.

Combined with MVP’s January decision to abandon plans to use a “blanket” permit to cross at least 500 streams and wetlands — an idea twice rejected by the U.S. 4th Circuit Court of Appeals — and a host of lawsuits, those factors have convinced Johnson that the pipeline will never be finished.

“I’m confident that this is going to be stopped,” he said.