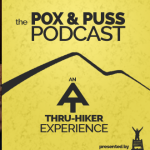 “Got a wife and kids in Baltimore, Jack
I went out for a ride and I never went back
Like a river that don’t know where it’s flowing
I took a wrong turn and I just kept going”
– Hungry Heart by Bruce Springsteen

We just heard the news about the passing of an Appalachian Trail legend: Baltimore Jack.

In 1998, Pox crossed paths with Jack while hiking the Trail, originally meeting him at Kincora Hostel.
Earlier this hiker-season, Pox drove around Franklin trying to find Jack…but couldn’t locate him.
Jack was probably somewhere sipping a coffee and enjoying a copy of the NY Times.

Puss met Jack in 2009 at Mountain Crossings, four days after she was “famously” asked “Have you met Baltimore Jack? You will.”
Puss is even wearing a Baltimore Jack button on her shirt in the first promo photo we ever took for our podcast.

In 2013 we were lucky enough to sit down and do an interview with Baltimore Jack while he was working at Mountain Crossings. It was early on a rainy day, and up until this point we had never recorded an episode without at least one beer in our bellies. We apologized to Jack for cracking a beer at 9am in the stock room of Mountain Crossings and he playfully scolded us for about 5 seconds…before pulling a flask out from his jacket pocket.

On that day, Jack was an open book. He was like a jukebox of legendary tales about the Appalachian Trail. We would ask him to tell a story and he would. It was amazing.  We were giddy, and walked into that interview to talk to a trail celebrity and we were humbled to depart with a pass of the flask, hugs, back-slaps and promises to do it again sometime.  Since its release date, the “Baltimore Jack Episode” continues to be our most popular episodes.

For the past several years Baltimore Jack could be found up and down the trail, volunteering his time, experience, words or cooking skills at outfitters, hostels, and other popular trail outposts all hiker season long.  He almost inevitably crossed paths with any hiker or volunteer who spent any notable amount of time on the AT, backing up his legendary status and bringing a humorous truth to “Have you met Baltimore Jack?  You will.”

Baltimore Jack LIVED the Appalachian Trail experience we all wish we could.
To call him a “Trail Personality” would be a disservice to the word “personality”.

Below you’ll find the two episodes we released from our interview with Baltimore Jack.

The Pox & Puss Podcast is a monthly show focused on Appalachian Trail Thru-Hikers, Long Distance Hikers, Adventure Travelers, and Explorers of all types.