Coco and Magnus — Days 112 through 120 — Slackpacking, a Birthday, and Trail Magic History

* Entered New York!
* The trail offered a nearly flat, vertical rock face or a ladder. Magnus took more challenging approach and I took the ladder.
* Went off trail to Hot Dogs Plus. “Plus” refers to sodas and chips and no more.
* Saw a frozen bobcat a guy had in his truck. He was on his way to the taxidermist.
* More instances of Magnus taking the more challenging option of the path while I would take the safer route.
* There had been a steady drizzle all day with promise of more rain, so we called it a day early in the afternoon. By 2pm, we were in our tent and then it started to pour. We spent the afternoon reading, napping, and eating. The rain did not let up. Rather than cook in the rain, we ate dry ramen,  peanut butter by the sporkfull, tortillas, and cold hot chocolate. 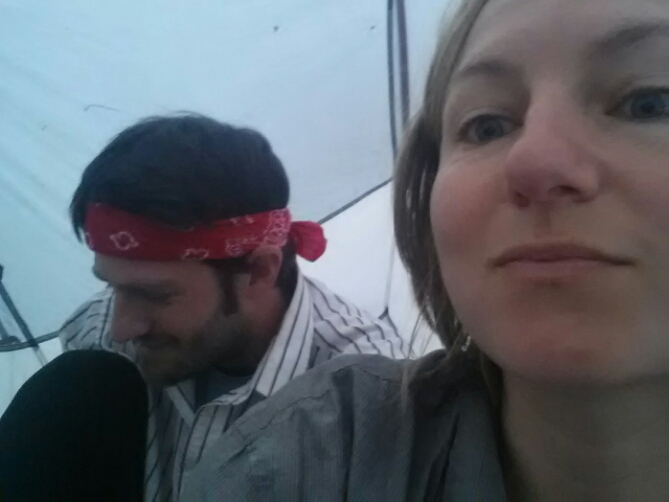 * It rained all night long. We did our best not to leave the tent and were pretty successful. Our tent once again proved to be a solid choice. (MSR Hubba Hubba NX!)
* Fitzgerald Falls was beautiful.
* Future hikers: great campsite just north of West Mombasha Rd., near mile 1378.8.
* Buchanan Mountain was the first boulder climb of the day. The climbs up and down wet boulders did not stop. Multiple times I had to toss my poles up ahead of me so I could use both hands to help pull myself up. Once I had to grip tree roots and hoist myself up because the ground was too slick to ensure steady footing. We had planned on hiking 20 miles, but the trail did not agree. Our exhaustion kept us from hiking and we didn’t even get through 15 miles. Every other hiker that I know of had the same experience. A humbling day on the AT.
* Harriman State Park is so beautiful! The water was metallic and orange-y, though.
* Many more boulder climbs. Every time there were two options, Magnus chose the harder climb and I chose to avoid injury.
* In the attempt to avoid injury, I noticed a huge black snake in our path as we crossed over a large boulder. Okay, no problem. Started to step a foot to the left. A huge rattlesnake coiled up. Began to walk around the rattlesnake more to the left. Another huge coiled rattlesnake. The boulder path was blocked by snakes. An Indiana Jones nightmare. There was no way around. We took our chances with the black snake and booked it around to the right as far as the boulder would allow. We survived.
* We passed the New York Long Path, which is a trail that goes straight to Manhattan. I really wanted to take it, but that will have to be for another time.
* Fingerboard Shelter is beautiful. The shelter itself is located high up and the camping spots are at various locations as the land slopes down until it finally reaches a stream. 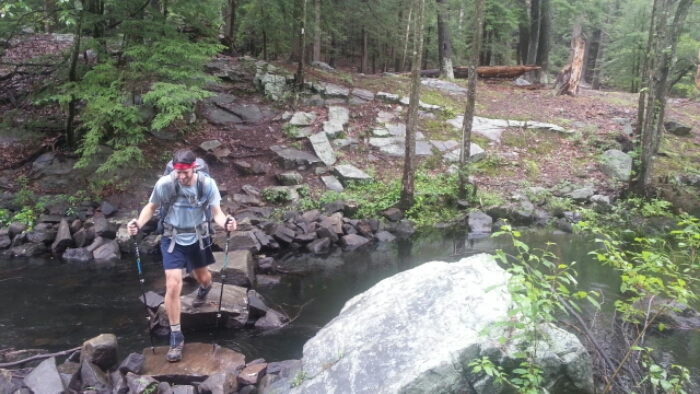 * New York City skyline from the Appalachian Trail!
* A section hiker thought some hikers ahead of us stole his solar powered cell phone charger when they thought they were returning it to a hiker who had already left. We witnessed the non-event. This will have relevance in a week or so.
* We climbed Bear Mountain — the first of three Bear Mountains on the trail. We celebrated our summit with Bud and Bud Light with snacks from the vending machines on top of the mountain.
* We took the long and beautiful descent down Bear Mountain, through a park, and through a zoo. Lots of high fives and a woman yelling “Girl power!” to Red Panda and me. Indeed, the Spice Girls would be proud of us.
* We passed the lowest point on the AT, located at the bear cage. The cage looked much more like a vulture exhibit, but no matter.
* Doc, Forward, and Red Panda continued over the Hudson and Magnus and I took a left down a sode trail to get to Fort Montgomery historic site. We were specifically looking for a cannon from the Revolutionary War from which you can look down the barrel at the Hudson. Magnus persisted and we found it, in addition to other historic ruins. I was really interested in spending more time there, but we had a date with the post office and not much excess time to get there.
* We did find the post office in time to pick up a care package from my dear cousin Kelly and her husband Harry. The guy looked at my ID, chuckled, and said, “Ahh Hans. You have the biggest box we have ever received for a thru-hiker.” He returned with a rather large box approximately the same size as my pack. Holy lord. It held such treasures as no thru-hiker has ever dreamed of. Dehydrated meals, dried fruit, candy, chocolate, three salamis, trail mix, dried rice snacks, five bags of beef jerky, beef sticks, and quite a few airplane bottles of booze. It. Was. Ridiculous. And. Awesome. Thank you, Kelly & Harry!!
* On our walk from the post office to motel, an off-duty firefighter pulled over, confirmed that we’re thru-hikers, told us to keep up the good work, then gave Magnus twenty bucks. Unreal! Thank you, Fort Montgomery Firefighter! We put the money right back into the community by buying our dinner.
* We stayed at the Bear Mountain Bridge Motel. (Future hikers: It’s great. If you ask very nicely, they might allow you to use their laundry facilities. BBQ across the street and a great breakfast place nearby.) Once laundry was underway, we tackled the task of consuming some of the tiny bottles. What a fabulous way to lighten our pack weight.
* Hikers beget hikers. Ran into all these dudes. Dudes are everywhere, always. I think these guys are great. 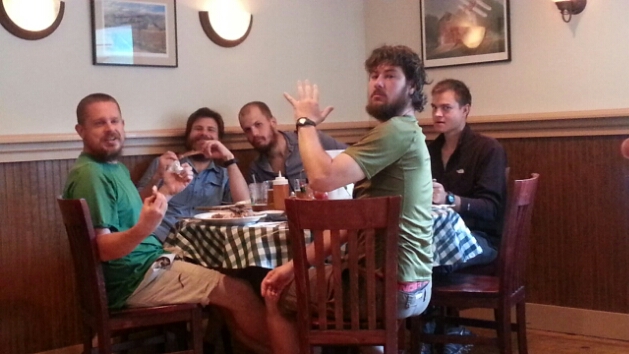 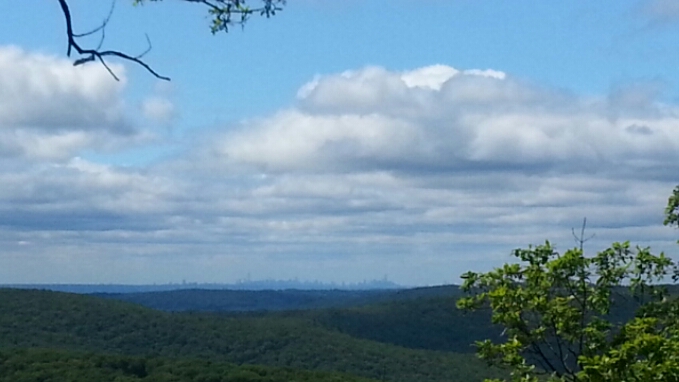 * We crossed the Hudson River!
* Passed a large black snake that tried to convince us it was a rattlesnake by shaking it’s tail against dry leaves. A fantastic effort.
* This night we survived the most intense thunderstorm on the trail so far. It was terrifying. We were camped on the edge of a meadow and the rain was relentless. Thunder that shook the tent. Rain that sounded like hail — fast and hard pelting the rainfly. Lightning concurrent with thunder all night long. Again — MSR’s Hubba Hubba NX tent is an amazing structure. 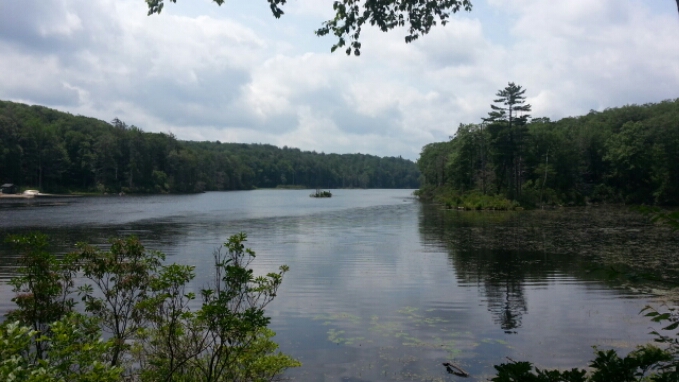 * Slugs were everywhere this morning. Tent, backpack, even the mouth of my hydration tube. Orange slime all over the place.
* We watched a mama bird feed a baby bird for awhile. Being still really affords so many opportunities to observe.
* Two kids tried to sell us weed while we were hiking.
* A spider literally came out of a water spout after the rain.
* We were the only thru-hikers at the shelter site. Paul, a section hiker from England, really giving the trail his best effort. Paul — I hope you’ve decided to complete the trail!
* Watched a kid engaged in a fabulous sword battle that only he could see. This lasted at least twenty minutes. Again, being still really pays off. 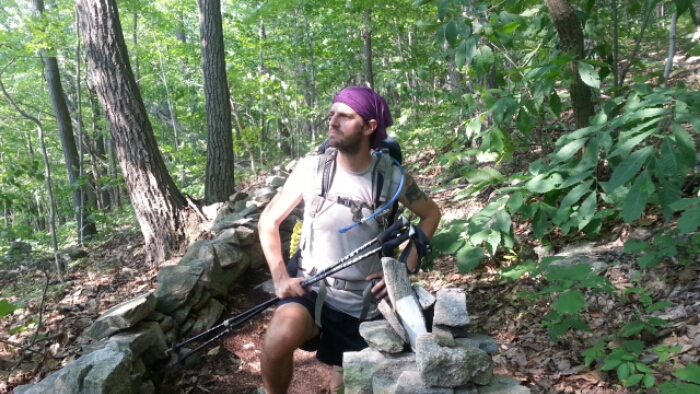 * My birthday!!!! Yay for me and thank you to my parents!
* Saw the largest oak tree on the AT!
* Trail magic from Mr. President!
* Hiked to Native Landscapes with Lightning and Porkchop.
* Wild apples are not as delicious as you might imagine.
* Native Landscapes is wonderful. Outdoor shower, reasonably priced snacks, a gazebo for hikers to loiter, outlets for charging, friendly and supportive staff. You can also tent for free — don’t fall for it!! Between railroad tracks and a highway. Rail and road traffic all night long. And my tent now has a faint odor of cat pee.
* More cousin love!!! Cousin Shaye and her friend Wade drove out to Pawling, NY from Brooklyn to spend my birthday with Magnus and me. It couldn’t have been finer: laundry, a tavern, and the most wonderful, adventurous, thoughtful, hilarious, compassionate people. I wish we all could have spent a month together instead of a few hours. Thank you Shaye, Wade, and Magnus for such a memorable and incredible birthday! 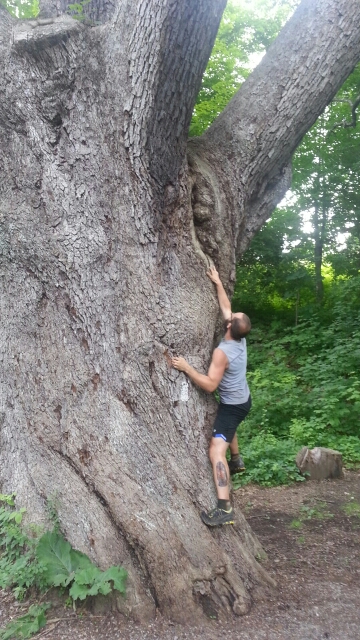 * Slackpacking! Finally, Magnus and I slackpacked. It was glorious! I am a convert. Even with little to no weight it was a challenging day.
* Connecticut! Our 10th stare! I wrote another beautiful song entitled “Gateway to New England.” True to form, those are also the lyrics. Magnus did not love this song.
* Varsity’s 100th day on the trail! We celebrated with pizza in Kent, CT.
* People got rowdy. To the people of Kent — please take us back. 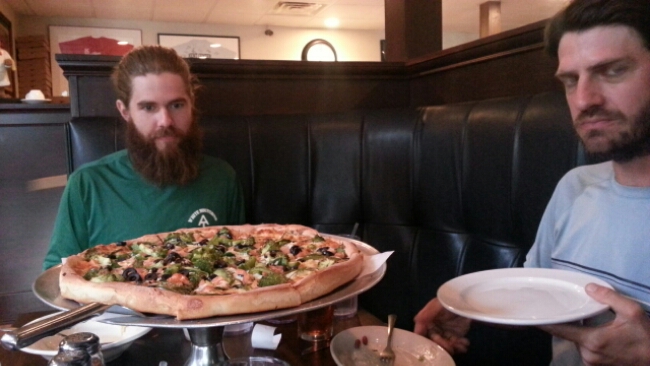 * Almost lost a trekking pole while crossing Guinea Brook. It was much more treacherous than it appears in pictures. Rushing water, wet stones, raining combined with posted notices about it being unsafe.
* The coldest 4th of July I have ever experienced. 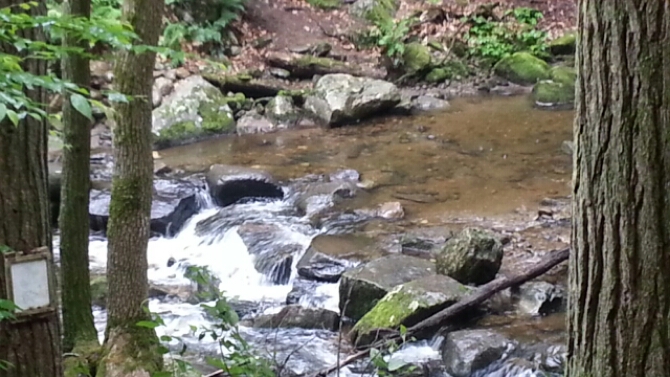 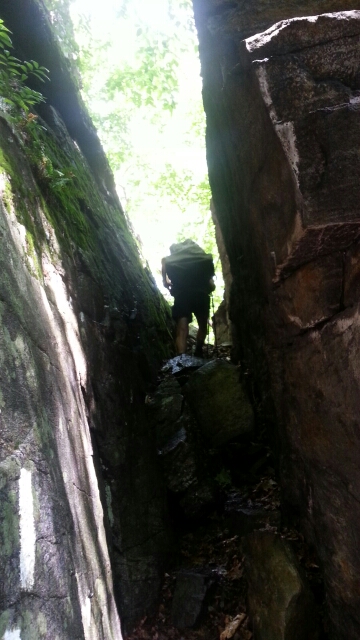 * Went to Toymakers Cafe. Delightful and delicious.
* Red Panda’s family created the most elaborate trail magic picnic possibly in hiker history. Tons of people, about six different kinds of salad, a grill, full resupply for about twenty hikers, and then some. It felt like the entire community of Goshen, CT was in on it. Want to know the Red Panda Clan’s level of dedication? They brought in their own picnic table that had to be cut down in order to fit in the truck. Thank you so much!!!! Extra special thanks to Red Panda and her immediate family!!!
* Very overwhelming but ultimately relaxing day. More people in one day than I normally interact with in a whole week. 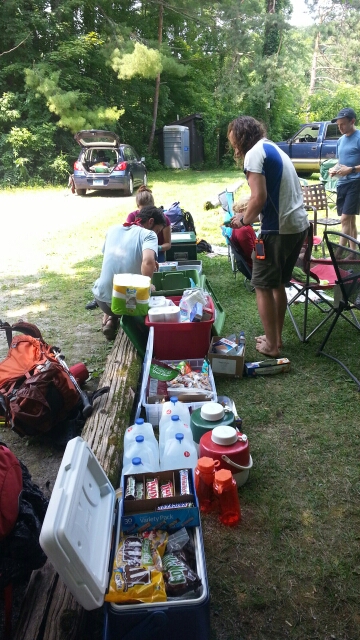