Dalton, Mass-Hanover, NH: Clinging to the shreds of my sanity

I can’t believe I walked back to my home state. I spent the first socially awkward 18 years of my life in New Hampshire, and I walked here from Georgia. I almost cried when we crossed over from Vermont, but that’s nothing new. I cry about everything now. 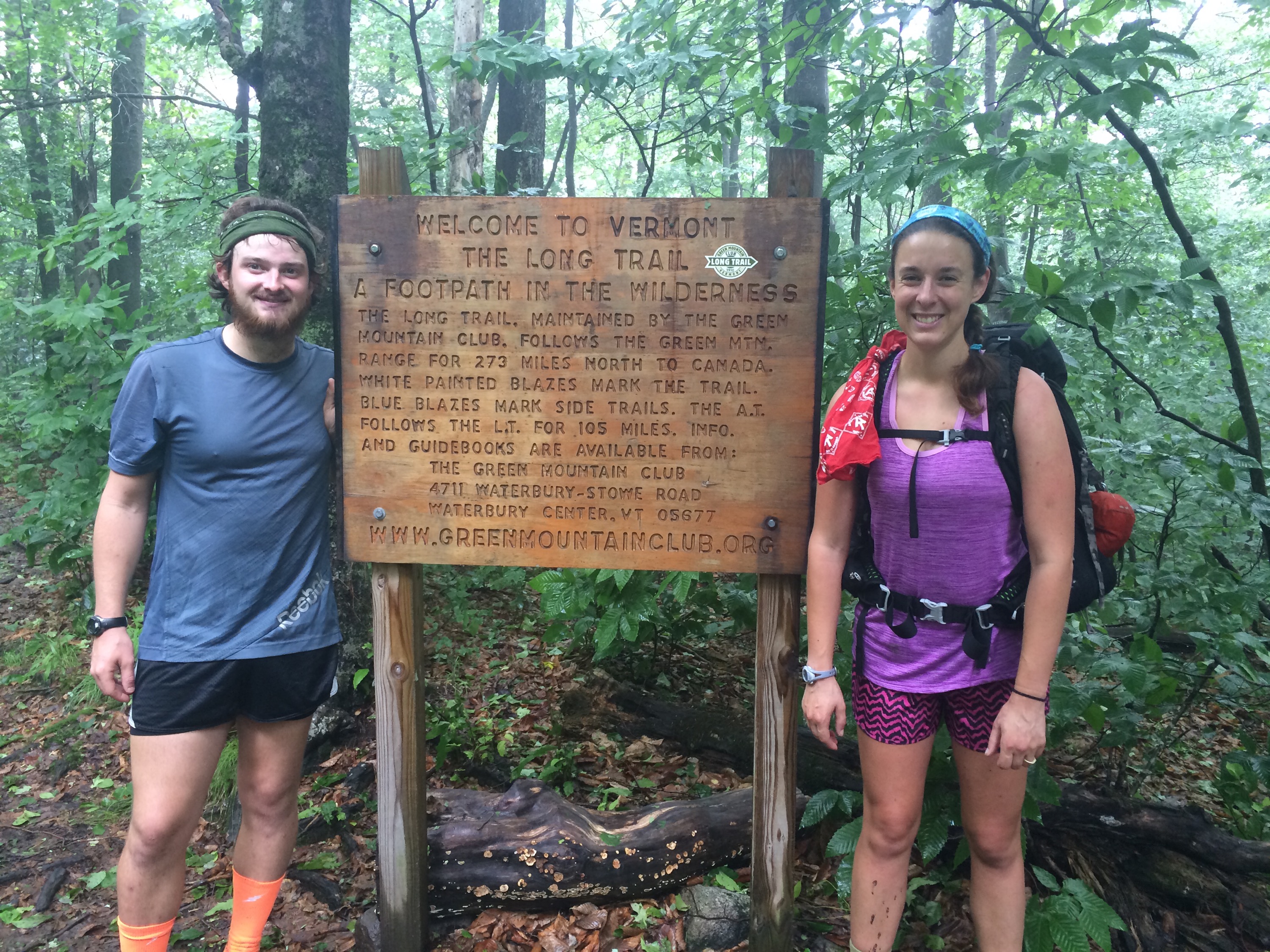 can’t you sense the upcoming mud pit you twerps?

Aside from mental collapse, I feel like I’m physically deteriorating. For the past 1000 miles, I’ve marveled at my body’s ability to recover on a day-to-day basis. The initial 500-mile period was hard, but then I got my trail legs and felt great. I’d still be wrecked after a hard day, but wake up refreshed the next morning. Since we got to Vermont, that has not been the case. Every day and every mile seems to compound upon the previous miles, and I wake up stiff and sore. My hamstrings burn going up hills, and I feel so weak I want to lie down in the middle of the trail and sleep for the next 24 hours. 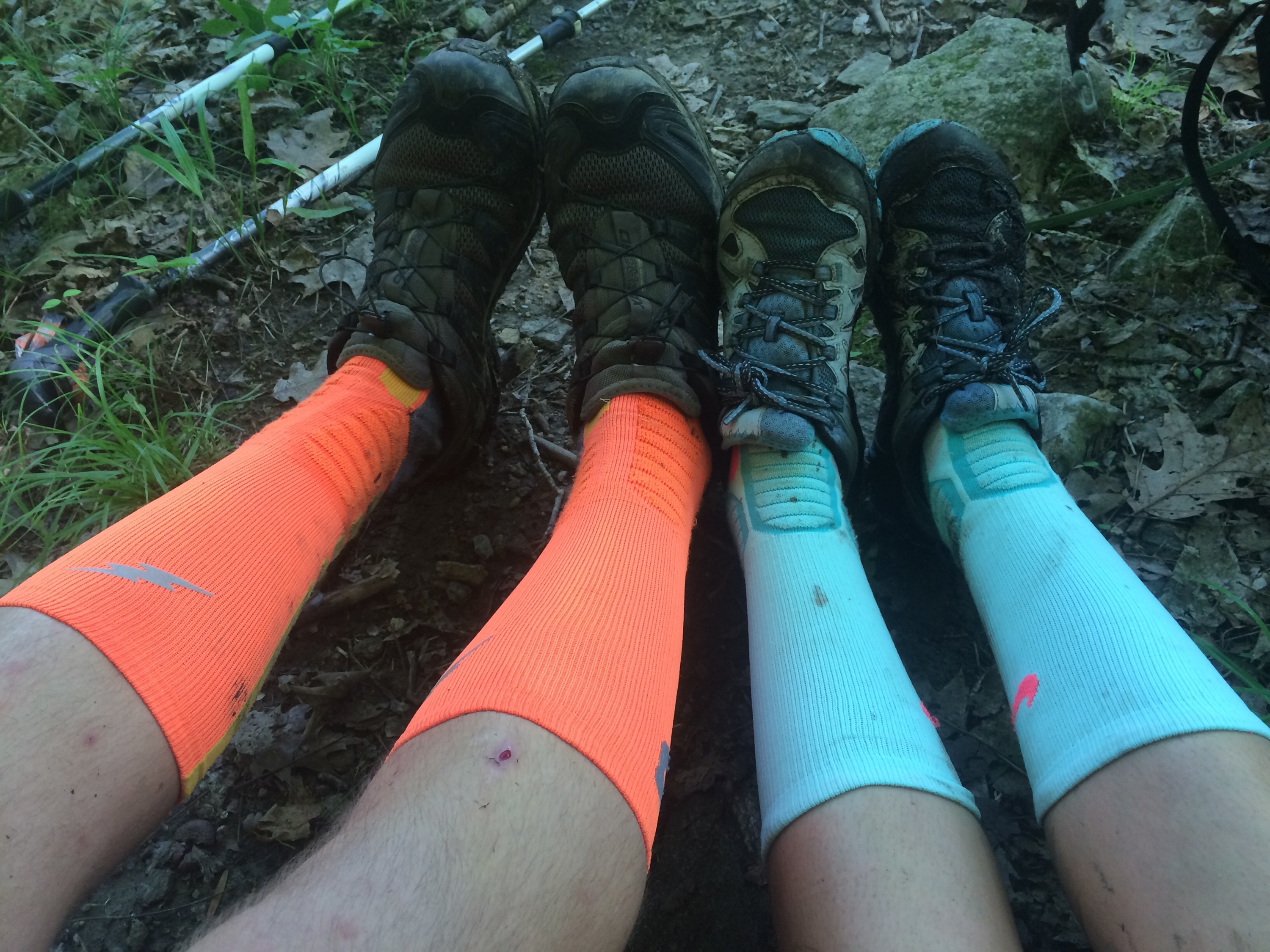 I think some of this is due to my weight issues out here. I’ve lost too much weight, and my appetite was misplaced around Pennsylvania, with no signs of reappearing. This makes me weak and exhausted, which in turn makes me moody and irrational. Like, more irrational than normal. We hiked up Killington Peak the other day, and for the first time on the whole hike, I wasn’t sure if I could physically make it. Killington is not a hard climb; you gain 2,500 feet, but it’s over the course of five miles, on relatively easy terrain. Silent Bob and Hare were way ahead, and I leaned my face on a tall, moss-covered boulder and sobbed. I dry-heaved trying to choke down a protein bar, and somehow stumbled/shuffled to the top. Then I cried the whole way down. 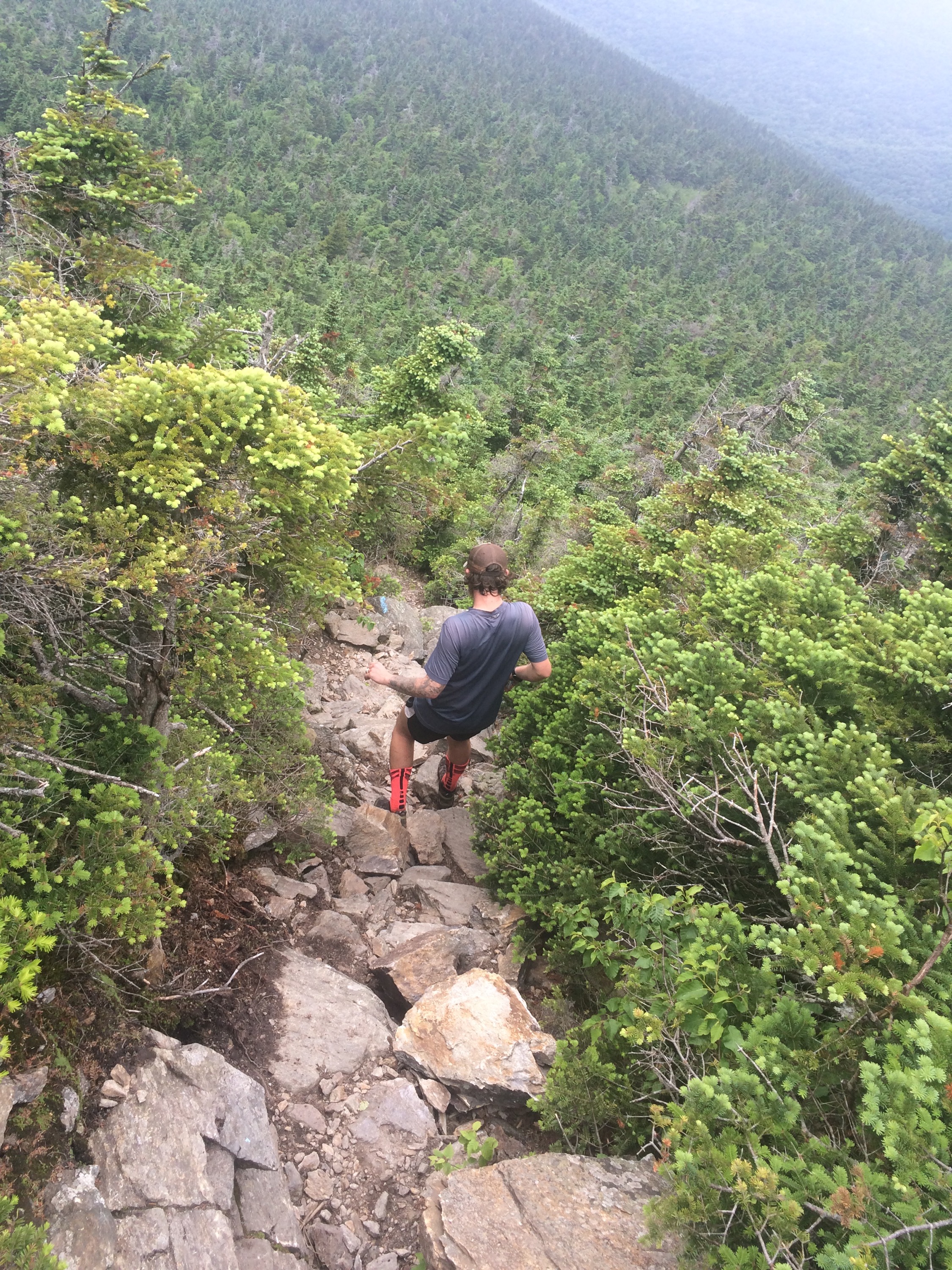 side trail to the Killington summit was super cool. Highly reccomended

Sleep is still a problem. Hare’s cold came back, and the snoring came with it. So between the lack of sleep, the lack of nourishment, and the accumulating miles, I have the emotional capacity and reactions of a maladjusted toddler. Bless the souls of everyone who has to be around me. Hare especially. 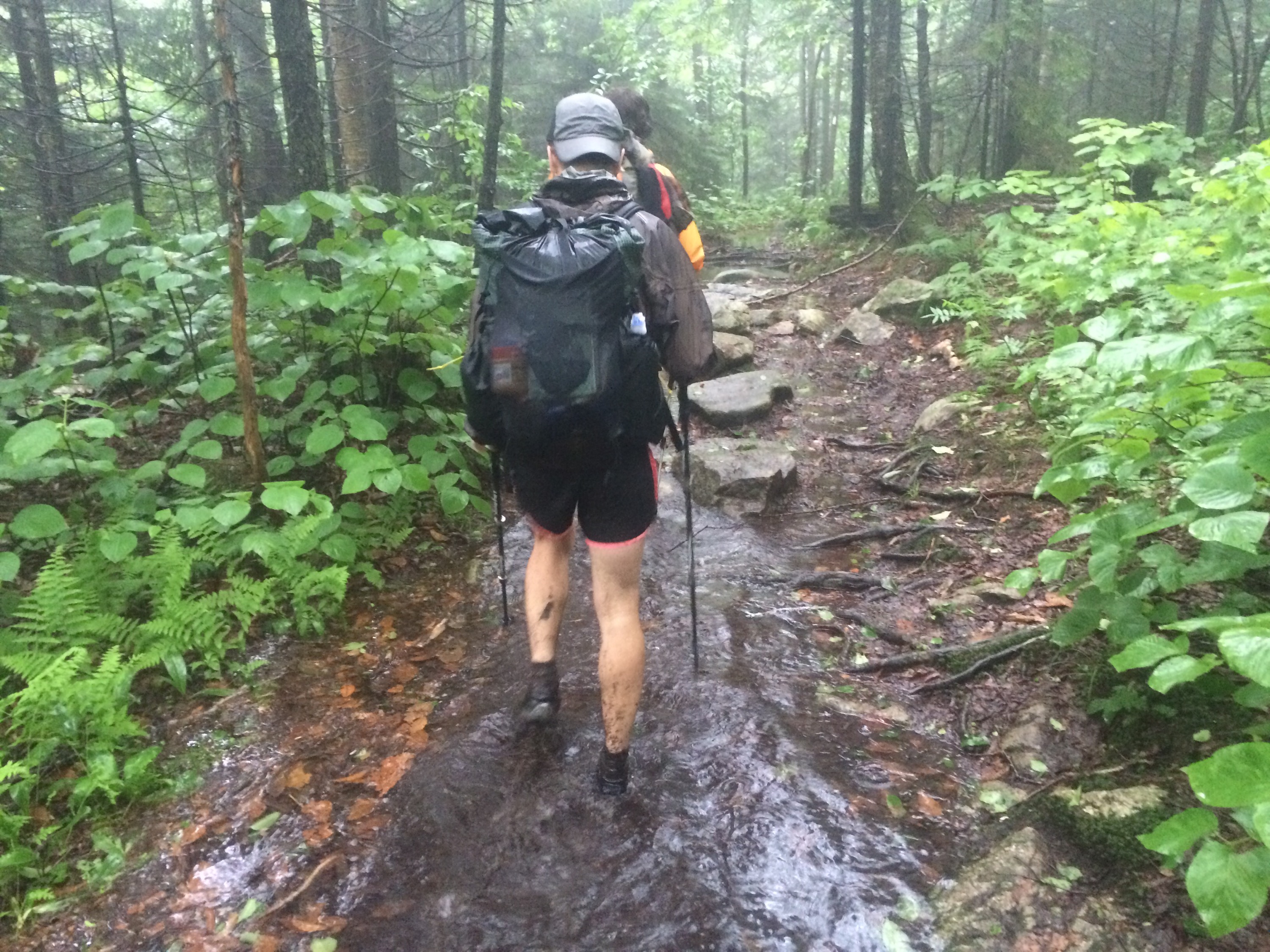 this was Vermont’s rainiest June in 130 years. ohhhhh

As for the hiking, we covered Vermont in 8.5 days, and we haven’t had a day off for 400 miles. I wanted to make it to my parent’s meet-up point next week without a zero, but Hare and I are both so drained that we’re staying in Hanover an extra day and taking tomorrow off. Phew. 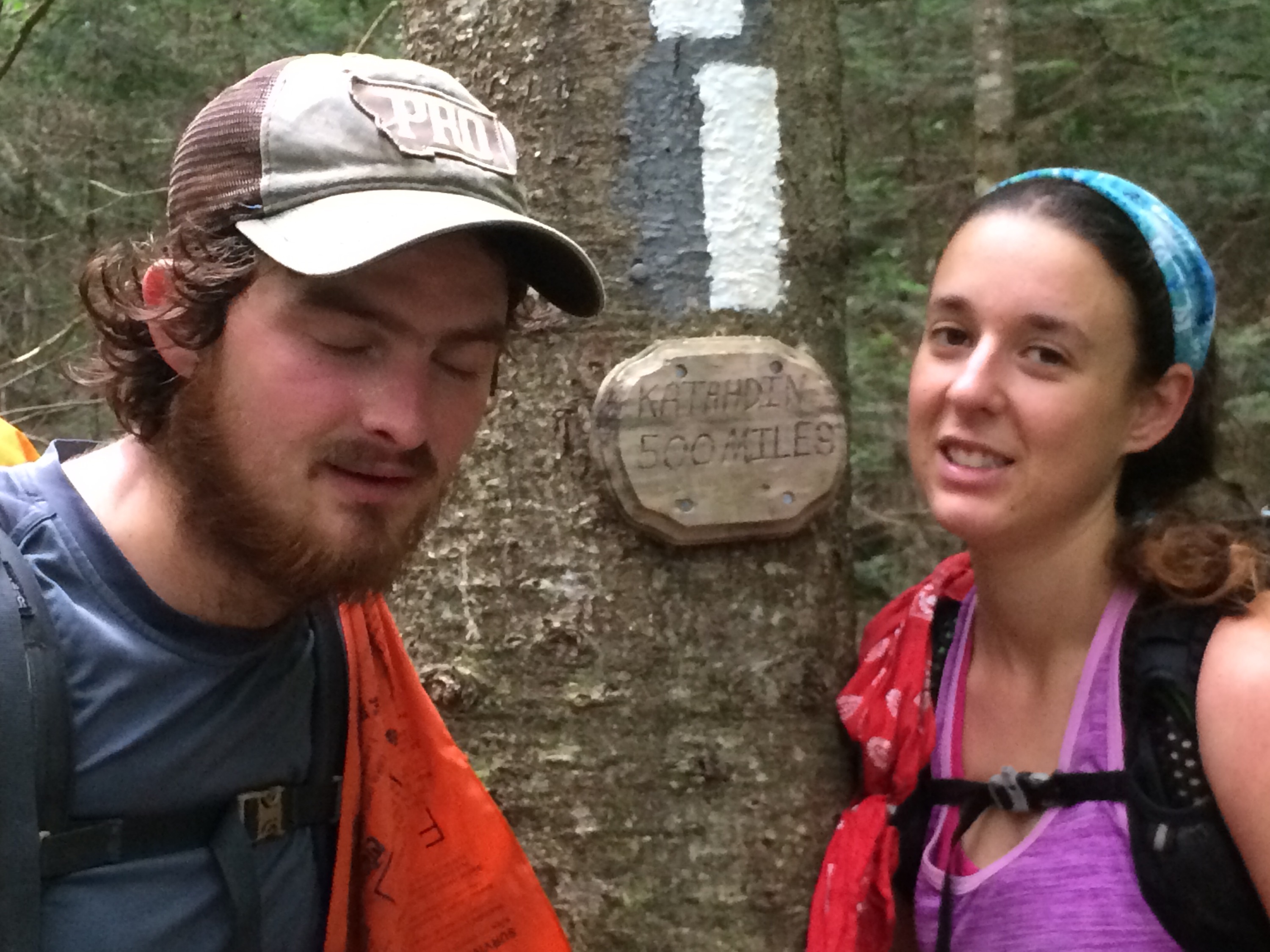 The end of Massachusetts was fun, we went over Mt Greylock as a frightening storm approached, and it was our fastest 20+ mile day yet. (I think it was also the last time that my hiking can be classified as “fast.”) The wind blew so hard I was semi-concerned our tent was going to fly off the side of the mountain.

coming down off Greylock the next morning. Look at the leaves blowing sideways! nuts!

Then we got to Vermont, and I was excited. The third-to-last state! The third circle of hell actually, if hell is trudging over 50 straight miles of ankle-deep, soul-sucking mud. I know Vermont (Vermud) is known for the viscous goop, but this was absurd. Do you know how hard it is to hike for 50 miles through mud and water? I didn’t. Now I do. I fell five times the first two days, effectively doubling my crashes from the rest of the trip. We camped in mud puddles, put our mud-covered shoes and socks on every morning, and landed in bogs every time we fell. Silent Bob crashed onto his hands and knees more times than I can count, and Hare had some spectacular luges downhill. Gross. On the plus side, Vermont LOVES hikers. It was the easiest state to get a hitch in, and trail magic coolers abounded. 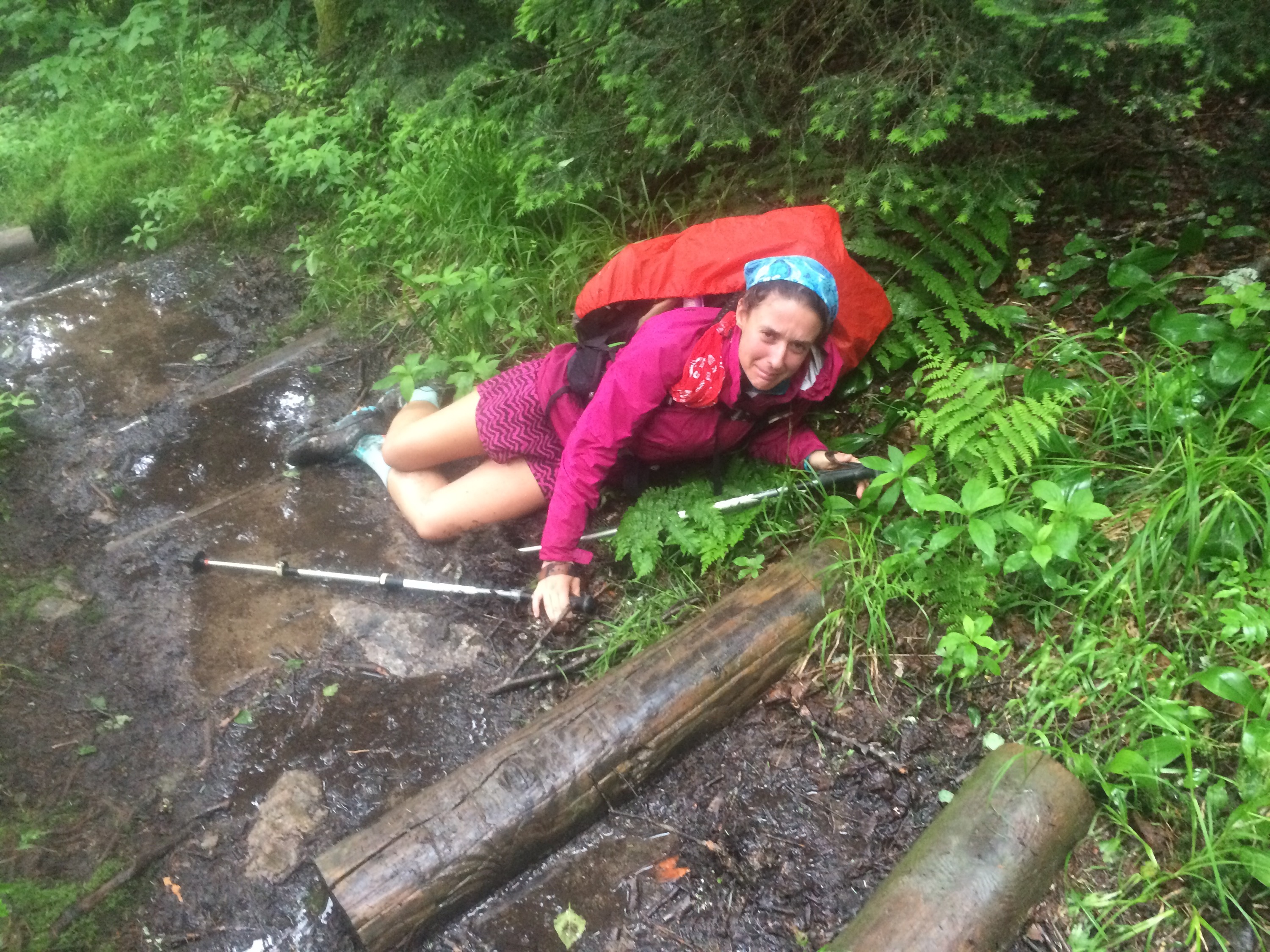 Spartacus thought this picture was staged, but I can assure you I did not lie down in the mud on purpose. this was a Class V wipeout

We ran into a TON of Long Trail hikers, which was fun, as the trail had felt empty for a while. We see a few SOBOs every day too. I think they’re so tough for having done NH and Maine as their first states. They also look more fresh and chipper than we do, and I’m happy for them. 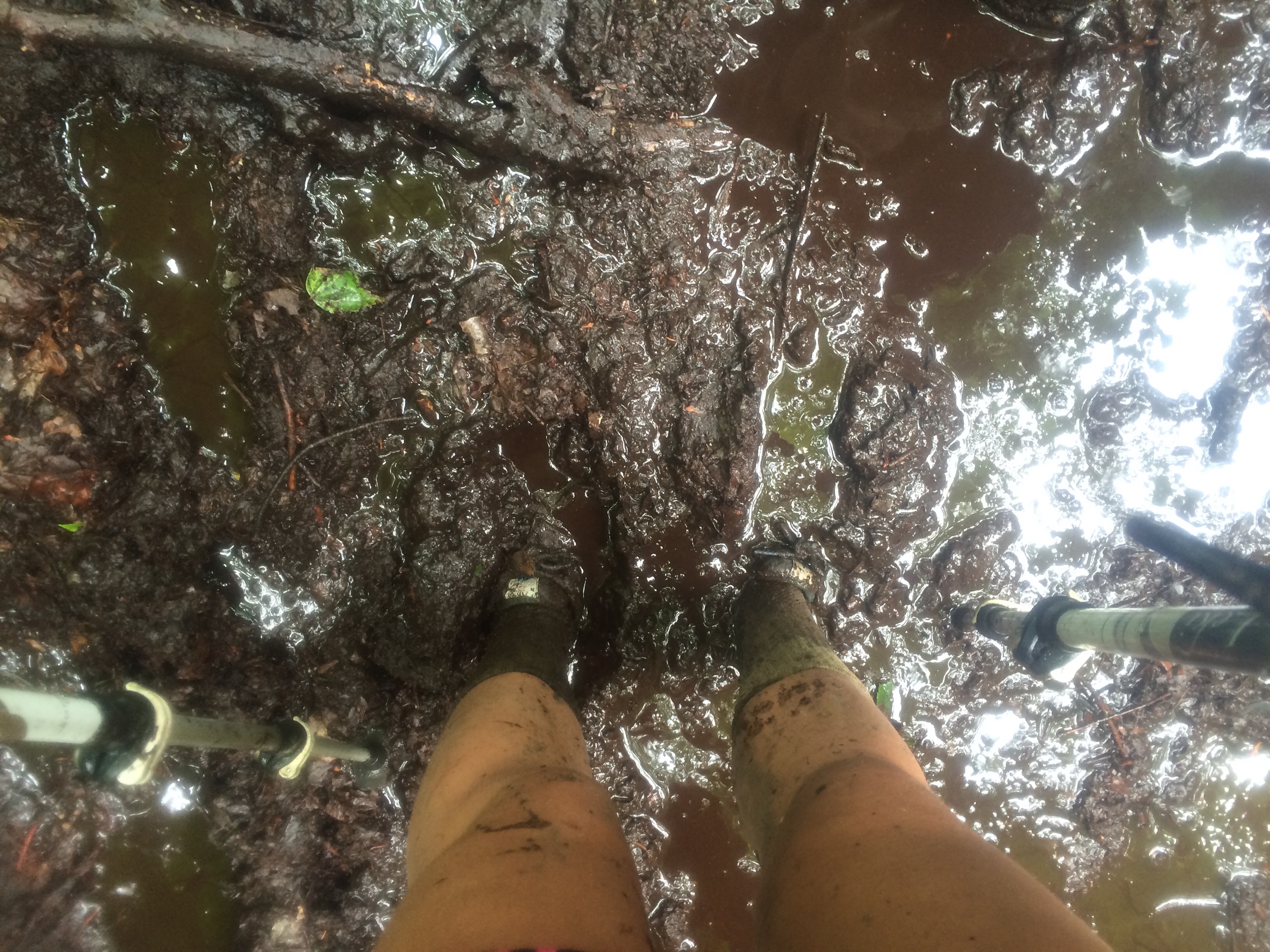 We hauled a$$ over Stratton Mountain in a terrifying lightning storm, which was less than fun, then hitched into Manchester the next day for a quick midday resupply. A lady came up to us, pushing a shopping cart with 12 bottles of wine in it, and offered us a ride. As we followed her to her car, I noticed her rubber chicken earrings, which dredged from the depths of my memory a blog post by 2014 hiker Amy Long, about an INSANE lady with rubber chicken earrings. Oh yes, same lady. We got in the car and she told us “I hope you don’t mind if I play some naughty songs for you,” and of course we said yes, go for it. So she played some “silly naughty songs,” then gave us a “silly performance about big t!ts” in the parking lot. She was completely harmless, and completely nuts. 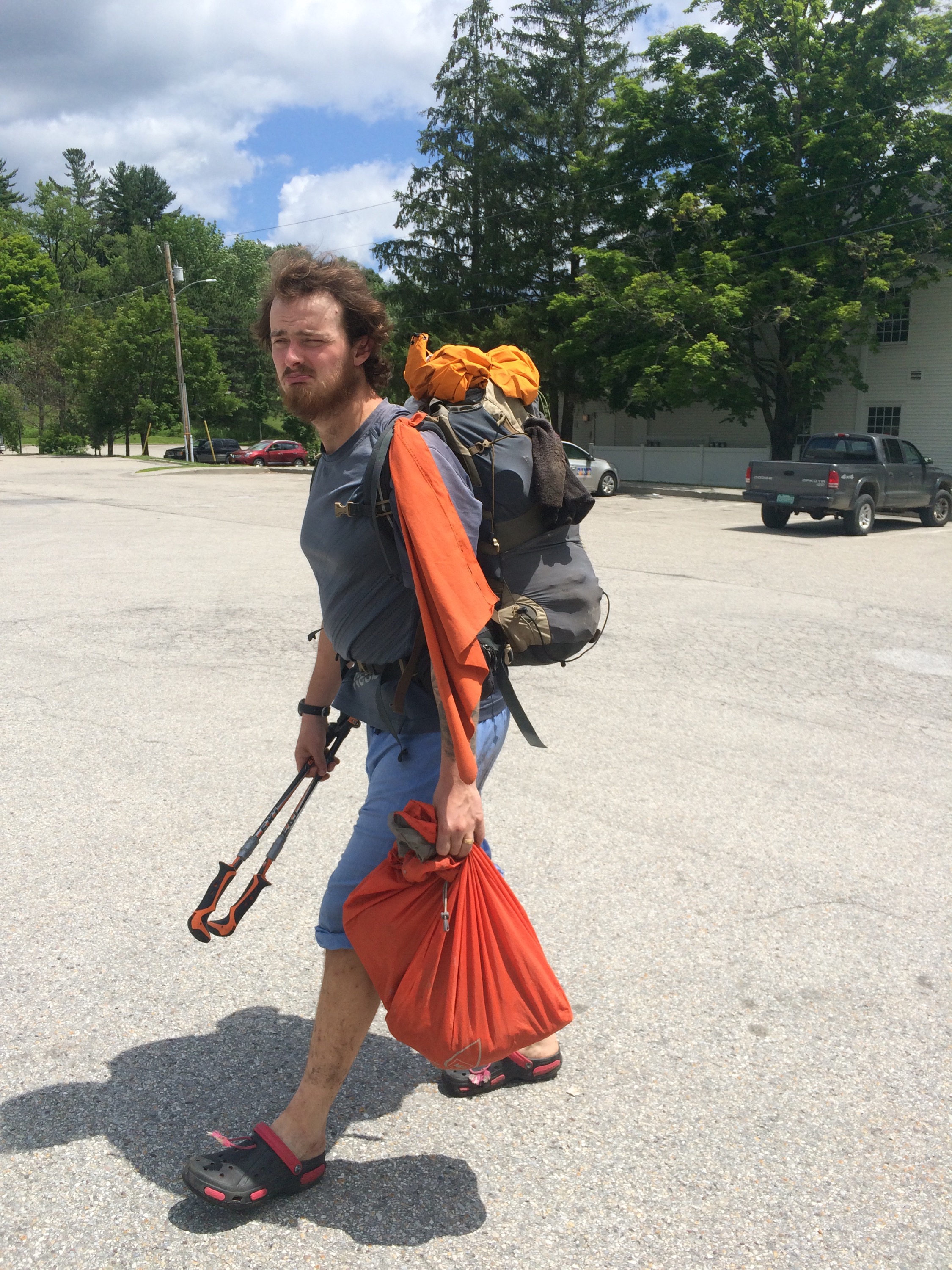 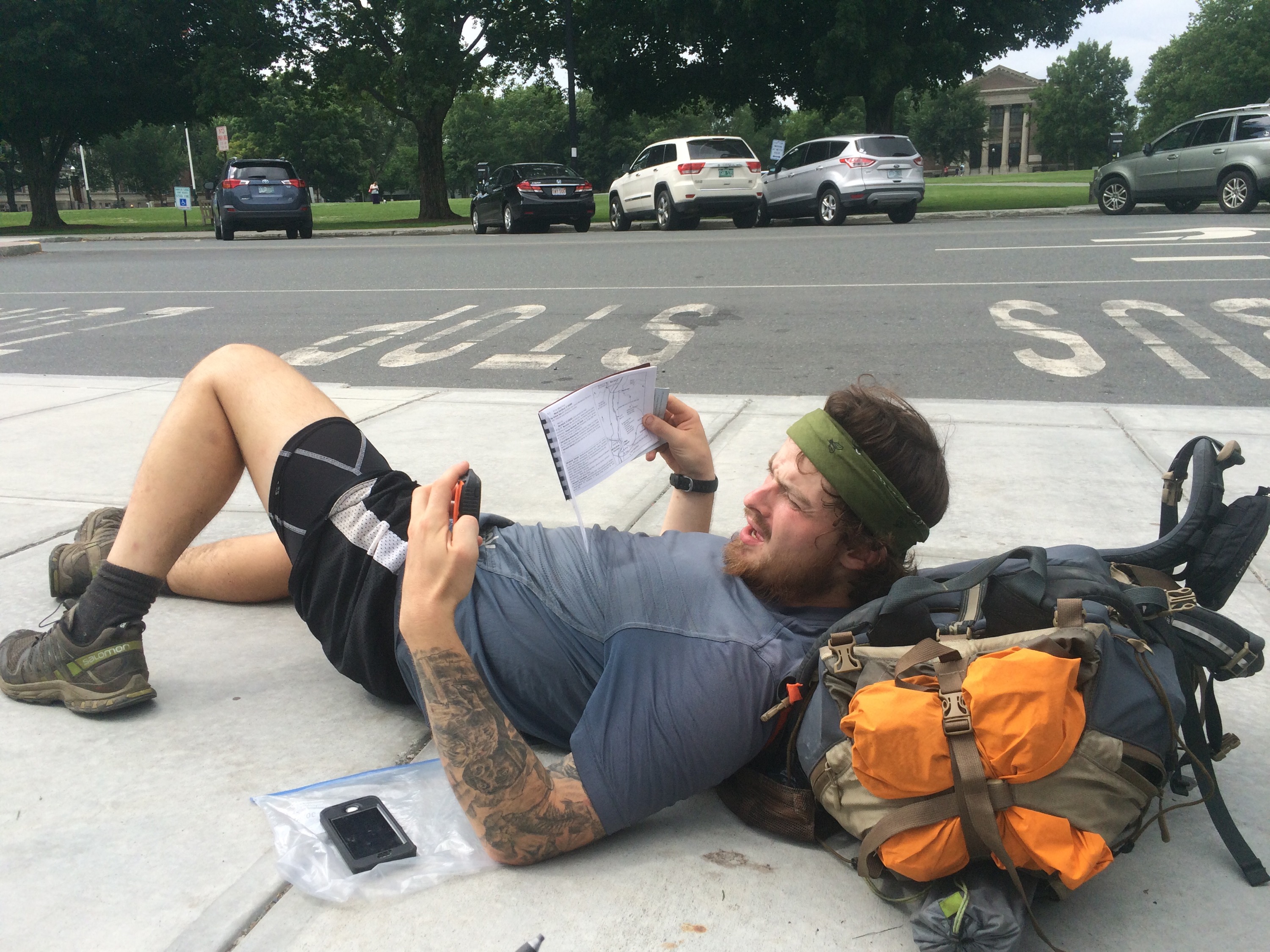 on the trail, we lie down whenever we take breaks, so he laid down to wait for the bus today, and it seemed normal I guess 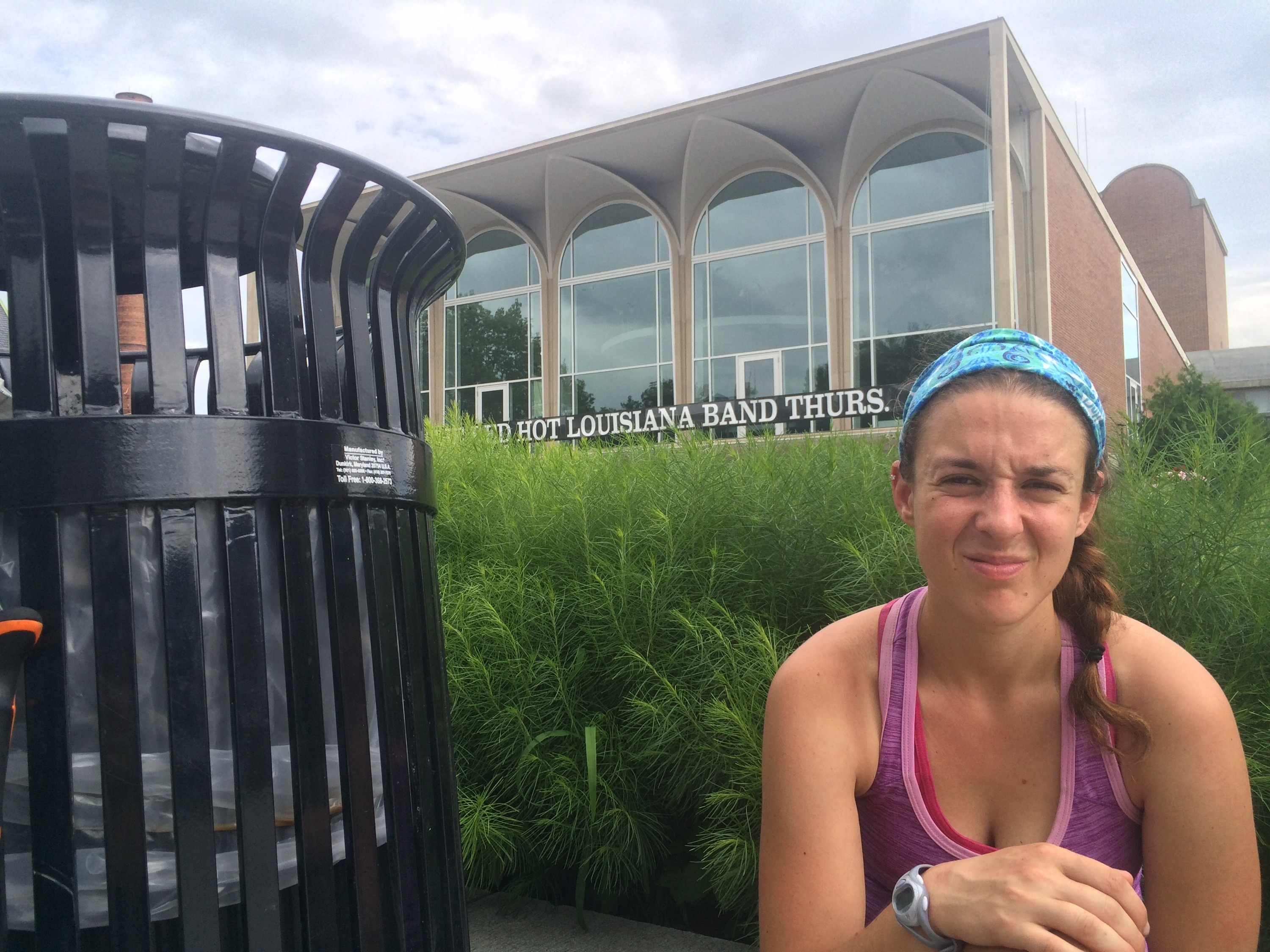 hiker trash, next to the trash

Oh! As we pulled back into the trailhead, we saw two female hikers emerging from the woods, and I recognized Emmi, from my frequent internet stalkings of other Appalachian Trials bloggers. Emmi is the first person I’ve met from AppTrials, and completely out of character for me, I gave her a huge hug. I think she was terrified, and halfway through I was like “oh my good gracious what the heck am I doing I’m so awkward help,” and then I tried to recover, so I encouraged her to take a ride with the chicken lady and listen to some naughty songs. I was hoping no one noticed my socially inept actions, but later that afternoon, Hare was all “Dude… Why did you hug that girl? You’re so weird.” So yeah, definitely blew my first encounter with another blogger. Sorry Emmi. 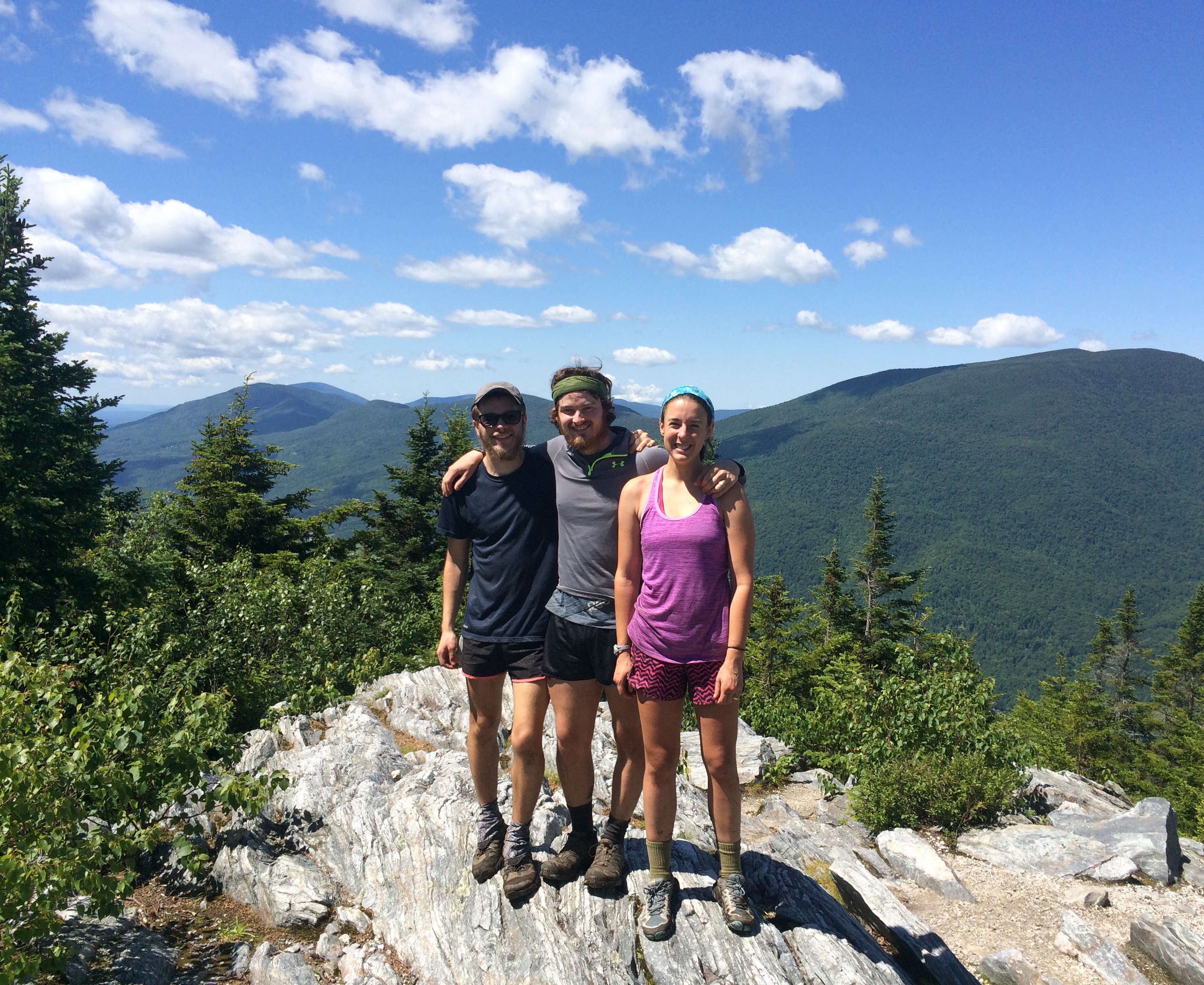 don’t know what this peak was, but it had a view! 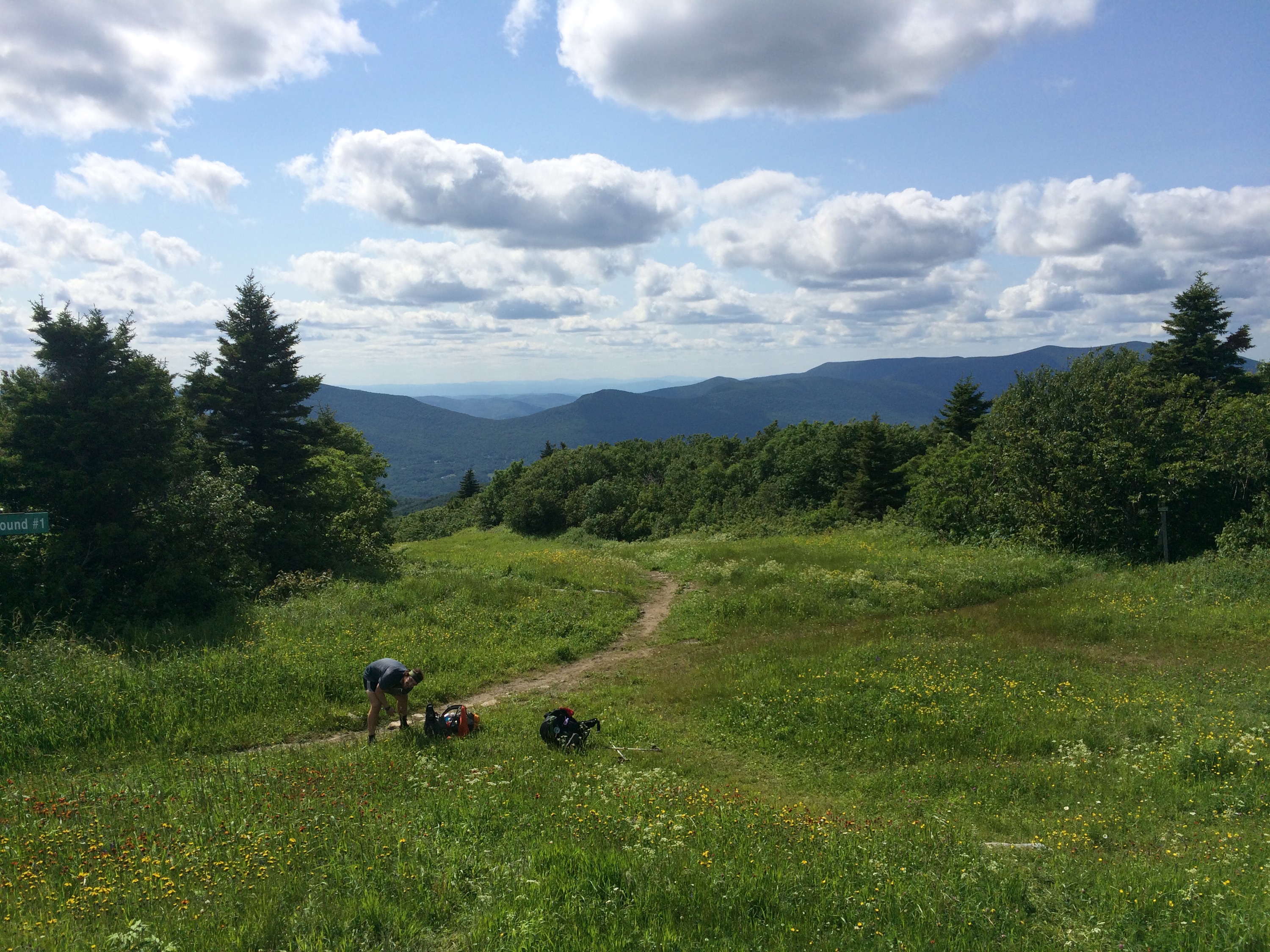 this was Bromley Mountain I believe. Hare is down there applying some Gold Bond hahaha

The second half of Vermont was way cooler than the first half, we climbed some fun peaks and the weather was amazing. I’ve just been so, so tired. I’ve never felt like there was the possibility of not getting through a day, but now I look at the map profile and freak out, wondering if I’ll make it. 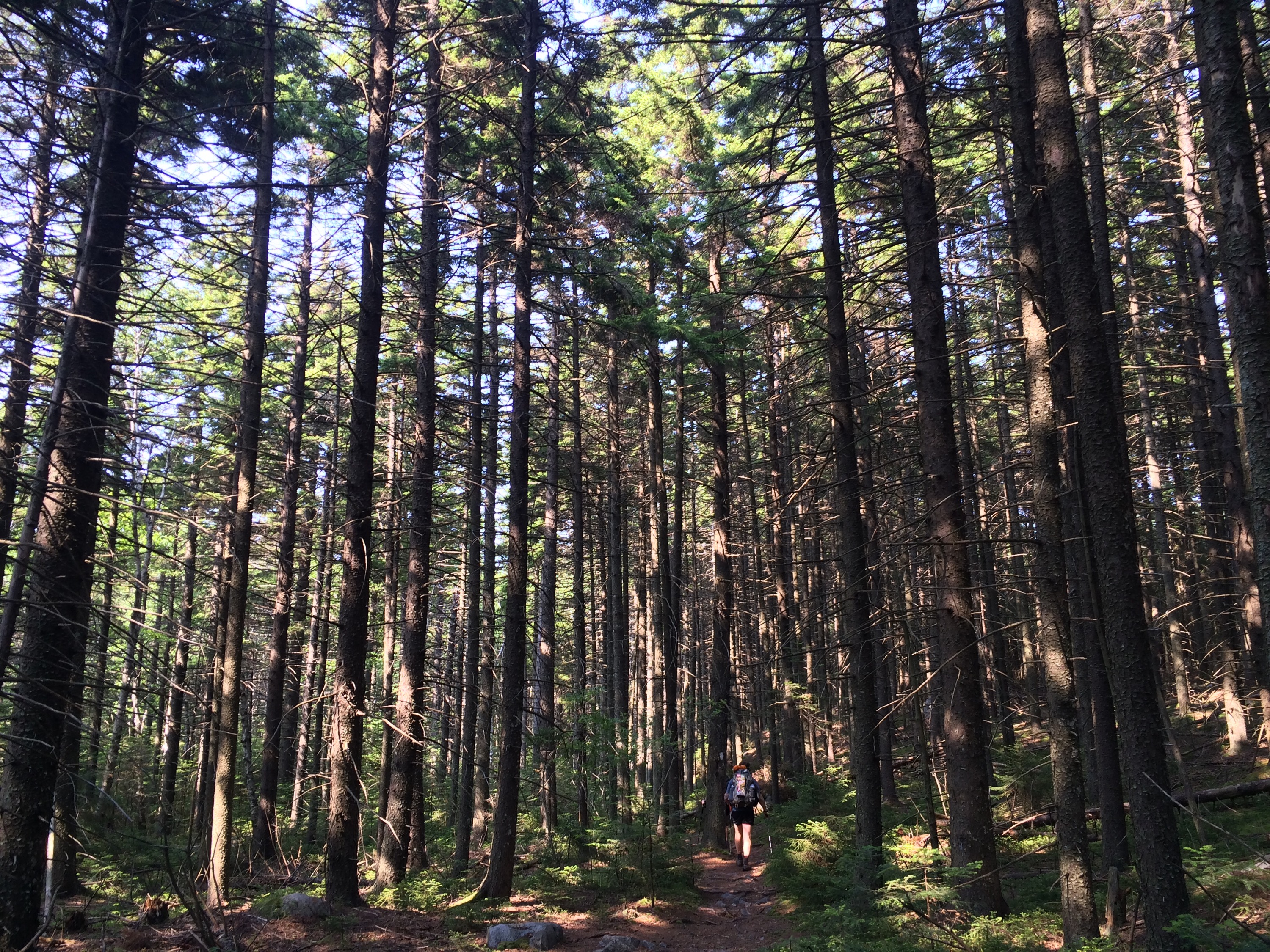 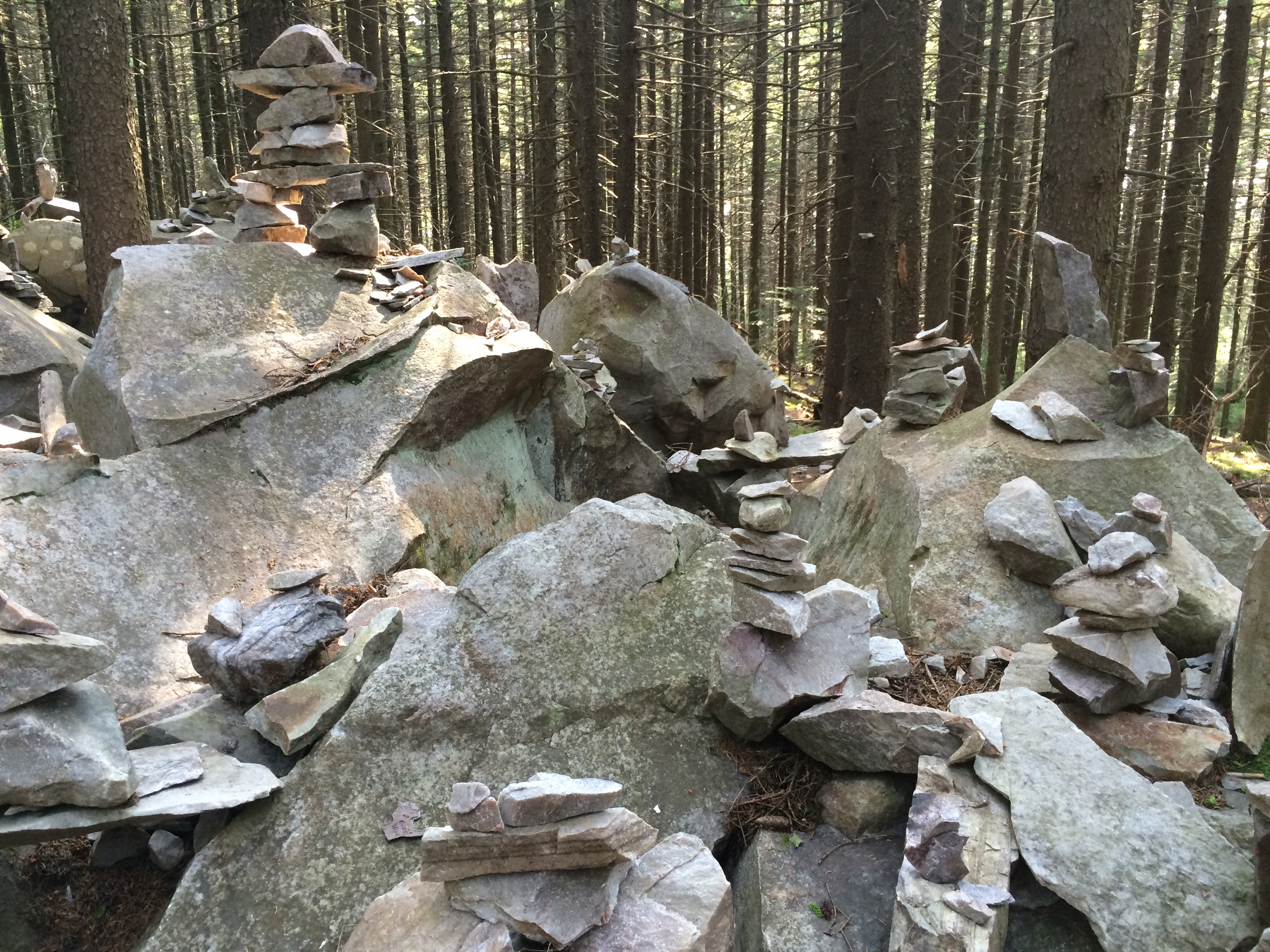 Yesterday was insanely difficult– 22 miles of 800-foot climbs and descents, all day. Allllllll day. I had a mental collapse after 20 miles, as we started up another insanely steep climb. I had inhaled a gnat and it was still alive inside my sinus cavity (or whatever’s up there) and I was sneezing and crying, wailing “I can’t dooooooo this anymore boohoohooooo.” And Hare just patted me on the back and let me cry, then we kept hiking. I apologized for being a wreck, and he said, “Aw you’re fine. Well actually, you’re a complete disaster, but it’s ok.” I love him so much. This is the hardest thing–mentally and physically–that I’ve ever done, and I don’t know if I would still be out here without his constant support. He’s got his days too– his trekking pole is permanently bent from being slammed into a tree during a period of sheer fury. Doin’ great out here, kids! The Appalachian Trail is a good old fashioned bucket o’ fun! 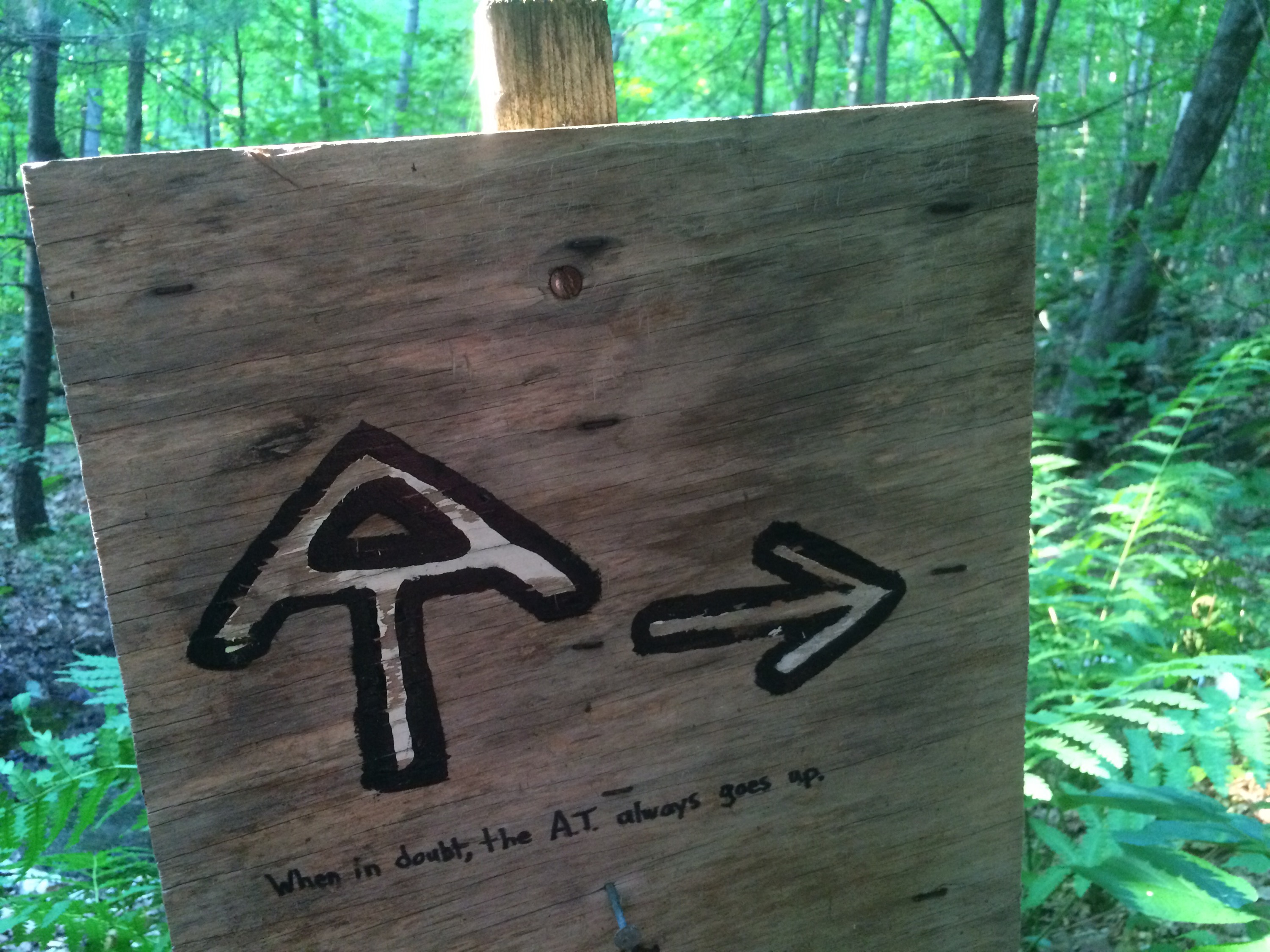 at a trail junction, the other trail went gently downhill, the AT shot straight up. Someone added that note to the sign 🙂

Well now we’re in New Hampshire, and we just met up with Spartacus for dinner, which was so great. He joined up with some folks who are slackpacking the entire trail, so now he stays in hotels/hostels every night and doesn’t carry a pack. We miss him. Prime is only a few days behind, so hopefully he’ll catch up soon.

In one week my mom is picking us up at Franconia Notch, and we will see my family for a few days, then my dad hikes in the Whites for three days with us! Oh, it will also be Hare’s first time meeting my family! Teeheehee. 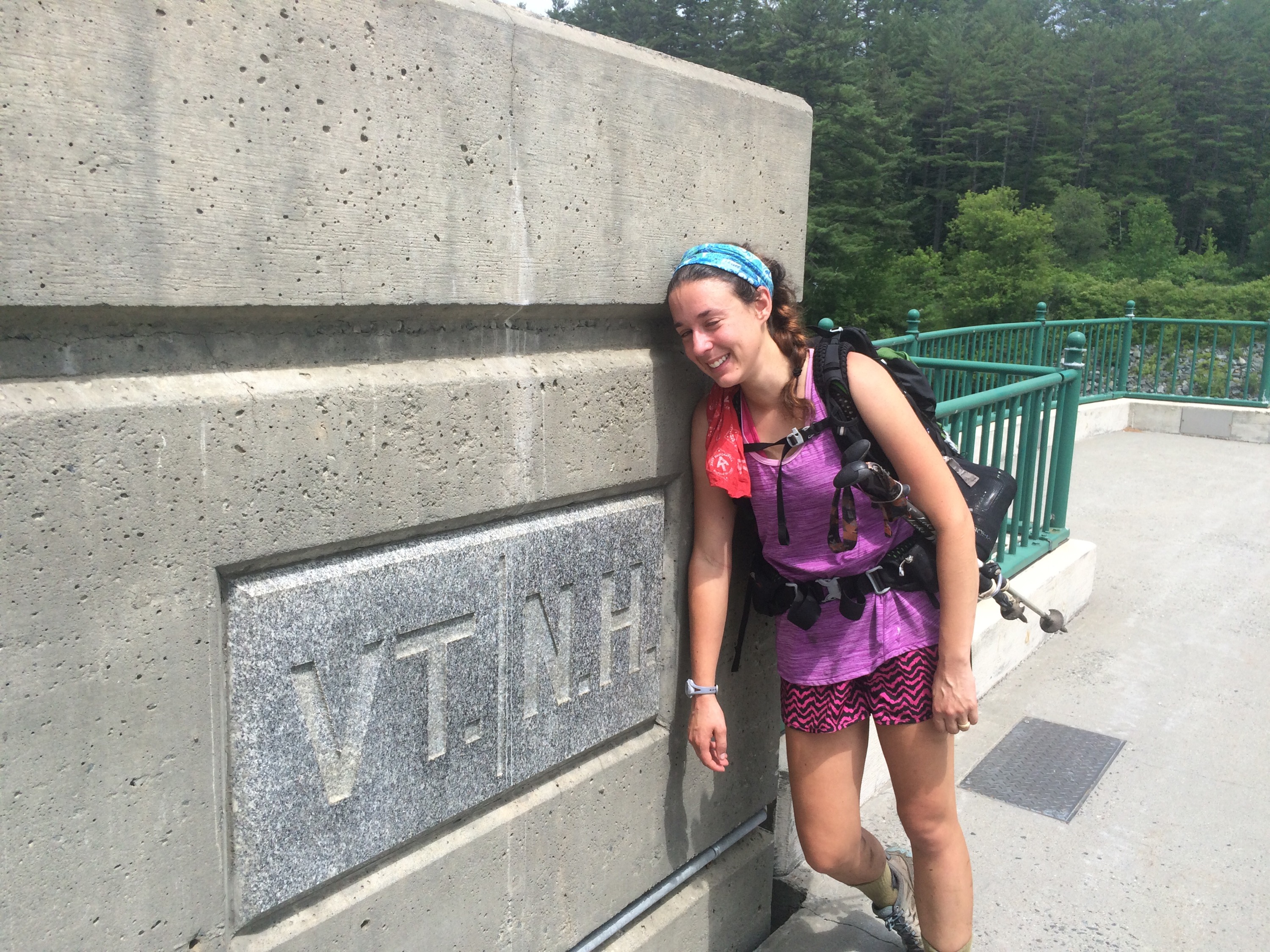 See ya! Honey Badger and Hare going to sleep now.