Enota to Virginia – A Quarter Complete

Even though each step up every mountain between Hiawassee, GA, and Marion, VA felt like it took forever, in retrospect it all happened so fast. I wish I could continue the day-to-day breakdown, but that’s impossible now.

However, I will walk you through—or more like a fast ramble about—the past 400-plus miles of our journey on the Appalachian Trail. 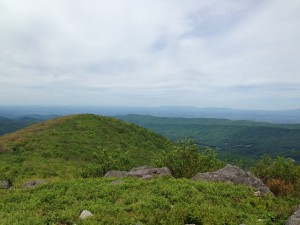 Since I last made an entry, we have crossed the Nantahala River, completed the Great Smoky Mountains section, hiked through our own backyard and have now entered Virginia. We hit mile 400 on Tuesday, May 14. We got to mile 500 on May 25. That’s right! Let the whole month of recap ensue:

After I recovered my knees at the Enota farm, I found a new way to walk. I learned how my body must uniquely move in order to hike long distance. I call it the “hiker hobble.” I even started to notice Noah had a hard time keeping up with me at times. Win for the girls! I also keep knee braces on. It might be a placebo but it works for me.

From Enota, the Nantahala Outdoor Center (NOC) was the next stop. Noah’s friend Alex was our host. We had an Easter feast with the 23rd Annual Trail Magic omelette breakfast at Rock Gap just before we made it to the NOC, which is at about mile marker 137. Noah decided to take on the 3 pound omelette challenge and devoured every bit. The omelette was made with eight eggs!

After a zero day and some much-needed showers, we had 30 miles to get to Fontana Dam and then enter the Smokies.

The Smokies changed the Appalachian Trail game for sure. With all hikers required to sleep in a shelter, it gets more interesting and crowded. The first day in the Smokies—climbing up to the Shuckstack firepower—was the hardest day for me so far. The elevation gain and hot weather (plus the lack of water) made it very tough.

We heard a story about a hiker named Doc who was visited by a boar while he was using the bathroom in the Smokies. We saw two elk first-hand the day we left the Smokies.

While we were hiking from Blackstack Cliffs in Greene County to a campsite about 17 miles away, we bumped into “Muttin Chops” who was searching for a cell phone he lost the night before. He had backtracked and scanned the forest floor for nearly two miles already but was willing to keep looking. He said it had fallen out of a pocket on his backpack. We wanted to help but had not noticed a cell phone along the side of the trail.

Not long after we parted ways we heard, “Oh! Here it is!” He found it about 10 feet from where we met him on the trail. I attributed the fact that we did not notice the phone on the ground to our curiosity of the potential south-bounder with interesting looking facial hair (mutton chops) approaching us. It was just coincidental that we met him at pretty much the precise location he lost his phone. Coincidences always excite me. This occurrence spurred my desire to document all coincidences in life.

When we made it to Hampton we got to see where Bob Peoples resides and has operated his donation-based hostel for 18 years. For 14 of those years, he has organized and executed a trail maintenance program called Kincora Hard Core. 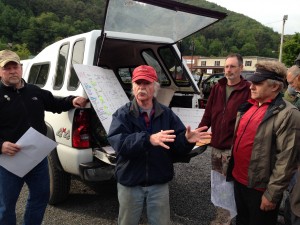 Everyone that wanted to do the Kincora Hard Core program this year had to sign up at Trail Days in Damascus, which was May 16-18. I completely enjoyed meeting all the brand representatives and I also had my busted sleeping pad replaced for free while at Trail Days.

After Trail Days, I was already convinced I wanted to participate in trail building, but the home-cooked meals, free Kincora Hard Core 2014 shirt (made out of expensive moisture wicking material—a hiker’s dream shirt) as well as the possibility that it could be Bob’s last Hard Core event all sealed the deal. Noah and I painted a white blaze along the new trail we built, too!

I plan to write in-depth about the Hard Core event for the Elizabethton Star since the program rerouted the AT on Roan Mountain in Carter County. I worked there before I turned in my two-week notice to hike the AT. I’m so thankful for the support the Star provides me while I’m out here.

From Hampton we started setting higher goals when it comes to mileage. We have been doing a lot of 16-mile days to get our average mileage back up. Zero days can knock your average down and it’s important that we keep up with that because Baxter State Park can close in early October some years.

Also shortly after leaving Hampton, we had a bear encounter at Watauga Lake! We watched a mother bear and her three cubs trying to get some other campers’ food down from a tree for a couple hours. Finally we moved to a new camp and put our food up again only to wake up to bears rummaging through our food anyway. I found it odd that we made it through all of the Smokies with zero bear sightings, but as soon as I’m hiking through home turf we were bullied by them.

Regardless, we made it back into Damascus within a few days of leaving Hampton. Noah’s mom brought us some food after the bears took ours. I’m really going to miss being so close to home. I’m so thankful for all the help we’ve received from family and friends. 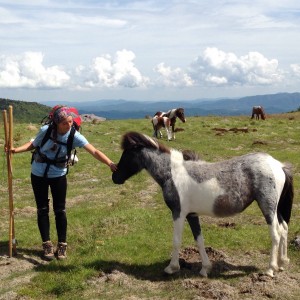 Just a friendly pony I met in the Grayson Highlands

I must also not forget to add that the Grayson Highlands were gorgeous. I got to pet a pony! Two ponies actually. It was such an awesome early birthday present! Speaking of birthdays, mine is June 4. We plan to be in Bland, VA by this weekend so my parents can visit. Can’t wait!

Right now we plan to be in Virginia for as long as we have been hiking the trail so far. Currently, we are finally at a 10-mile-a-day average. We did our first 20-mile day before we reached our current destination of Marion, VA.

We’ve had chance encounters with many friends we’ve made on the trail. We saw Wild Child and Little Guy in Hiawassee and Gatlinburg. The only way we’ve been able to catch up with Persistent and Refugee has been during the times we’ve slack packed southbound, which was twice. The Osprey Boys have also made several appearances as well as Grizzly and Guppy.

Our friend Donny came out on the trail with us and we camped on Unaka Mountain. My friend Veronica and my parents also came to visit us during Trail Days in Damascus. We also got off the trail earlier this month to go see Noah’s sister graduate. It has been great getting to see family and friends.

Wow. I feel as if I’ve barely grazed the surface of all the moments we’ve shared with others and together on the trail so far. I admit that I could do better at documenting this trip and I will.

Thanks for your patience!

Catch you all on the switch back,
Kayla (Pending)

P.S. My trail name is Pending. Started saying that and it stuck. And so it is.