In every walk with nature one receives far more than he seeks.
— John Muir

From preparations to participation, the Appalachian Trail has tested every fiber of my being — emotional, physical, spiritual and ethical. Currently, we are almost completely through Georgia. But, that skips through all the memories we’ve collected so far.

Immediately I realized that I wasn’t venturing off into solitude with Noah. There was no lack of new faces the first day on the AT. Some of those faces actually became very familliar by the four shelter to which we hiked.

But, then we started to deal with parting ways with those we’ve met because of injury, longevity and speed. Of course, I’m talking specifically about a particular group of people who made the first week unforgettably fun and full of support.

It was Gooch Mountain Shelter where the top bunk Space Cadets conveined for the first time. Including Noah and me, who were dubbed Smokey and the Bandit (more on the trail names later), the Space Cadets consist of Persistent, Refugee, Little Guy, Wild Child and Chief. We all hiked our own hike, but it just so happened we were eventually always going to the same places.

Noah and I didn’t stay in or near the Hawk Mountain Shelter the first night like everyone else in the April-4-or-5-AT-starting-day group. We camped right off the trail and in our tent. It was a successful, warm and dry night. We cooked dinner and made friends with Ronin, who is a retired military officer. Most of the details surrounding his service were not on the record though.

The next morning we set out to go to the Gooch Mountain Shelter and along the way realized some rain was about to head our way. We made it to the shelter while there was still room on the top bunk. Score one for the home team!

We situated ourselves near the wall of the shelter on the right side. As we nestled into our first AT shelter of the whole trip, we watched a slew of hikers come across the ridge and into the camp. The shelter quickly filled its 14 person capacity and the rest were left to decide whether to pitch their tents and hammocks considering the pending rain.

Some folks arrived after the rain began to pound the roof of the shelter. Many pressed on to make it to town — Suches. I was glad we decided to stay there because the bonds we made with our top bunk crew are unforgettable. The rain on the roof was also one of the most peaceful sounds I’ve ever had the chance to listen to.

Zero day because of rain. Lots of Yahtzee and resting on the top bunk. It rained all day and more hikers came through seeking refuge. But, we made sure the shelter stayed full by overstaying our welcome. Regardless, I saw a hiker attempt to sleep on the picnic table that was inside the shelter. Major fail. But, (A+) for effort.

We hiked 16 miles from Gooch Shelter to Mountain Crossings (Walasi-Yi Center). It was rough. We crested Blood Mountain, which had a shelter built by the Civilian Conservation Corps resting on top. The view was breathtaking. However, this was the point in which I had already drained my battery so no evidence. Once we got to the outfitter at Neel Gap, we settled into the hostel. It turned out to be a great idea because a local Hiawassee church provided us with some much appreciated trail magic. It included two types of macaroni and cheese, bread and butter, salad, chocolate, cookies and barbecue chicken.

The hike to Low Gap was painful for me. My knees had been sore for a while, but it was manageable until this day. I really think it was pushing too far to do two big days in a row. I learned a big lesson. I remember placing my knees in the cold stream that runs by the shelter that day. I was trying to ice and rest my knees, but nothing seemed to help. I took ibuprofen as well with no obvious improvement in my joints. It started out being the right knee, but I fashioned my ACE bandage in such a way it eased the pain. All I had was a bandana for the left knee.

The Space Cadets all contributed to a taco dinner that night at Low Gap. We contributed some pita bread and beef crumbles. The rest of the spread included tortillas, cheese, cheesy rice and trail magic leftovers that Wild Child packed out of the shelter. It was delicious and a great bonding moment. We really were becoming great friends who knew that we could all depend on one another.
The Space Cadets topped off the night with a huge “bond” fire.

Since I though I lost the tent stakes, we fashioned some out of sticks the night before in order to sleep  outside of the Low Gap Shelter. The next day Refugee and Persistent helped us scour each tent site along the way for stakes left behind. We found about five. It was a fun game and made for great opportunities to rest every once in a while.

We all made it to Blue Mountain Shelter. It was the first mountaintop shelter I’ve stayed in on the trail. When I woke up before light swept the mountains, I was able to watch as the sun peeked out from behind the mountain range. It was gorgeous.

Here’s where it all goes down hill. We made it about 2 miles to Unicoi Gap before deciding to flip a coin to either go into town or keep going. Town – heads won the toss. We tried hitching a ride, but eventually waited for the Budget Inn shuttle. Persistent and Refugee were with us.

When we arrived at the hotel we felt guilty for letting Wild Child and Little Guy go on without us. We even tried to pass the word on to them through hikers passing up the chance to go into town. Regardless, Im standing outside of the hotel office when I hear an exclamation from Persistent.

IT WAS WILD CHILD AND LITTLE GUY! Great minds think alike. We all hugged and rejoiced at the fact that we made separate, but similar choices. The all-you-can-eat buffet up the road was calling our collective name – Space Cadets. Reuniting with the crew we grew to know so well was one of the most authentic feelings I’ve had so far on the trail.

However, what I could also feel was the deterioration of my knees.

This was another zero day based on my knee pain and Little Guy’s illness. Chief caught up to us on this day. It was so good to see him again. Unfortunately, he had sad news — he was leaving the AT. He hitched a ride from some relatives to Gatlinburg, where he plans on staying for a while. He said he would be willing to meet up with us once we make it to the Great Smoky Mountains.

My knees were starting to affect my morale and determination. I felt helpless. Noah and I decided that we would take Dr. Suan Freed up on her offer to do a work-for-stay program at her farm in Hiawassee. We bribed a ride to the road where the farm is located along with Little Guy who was still feeling pretty ill.

The first day on the organic farm we shoveled manure for about six hours. It was surprisingly fun. We met some of the staff members — Guy, Robert and David — and were warmly welcomed. It’s been a blast to get to know all the animals — mini horses, cows, goats, chickens, rabbits and cats — as well as the Enota staff. Dr. Freed is hoping more hikers willing to work hard for their food and lodging might come through this year. I think we made a good impression, but I know that farm has made a lasting impression on me.

I found out through Guy that the buildings constructed on the property were built by the CCC. It just made the experience even more exciting for me. I just kept imagining that all the work I was doing was because I had enlisted in the CCC. Wouldn’t that be awesome? Enota truly embraces the Appalachian Trail spirit. After all Benton MacKaye meant for the trail to connect communities that returned to the roots of survival.

We are leaving tomorrow April 16 to continue on our way. I am hoping my knees hold out. We have arranged a slackpack with an Enota staff member. It will really help me get my knees back in shape without the additional weight. We are going to shelter hop until Dick’s Creek Gap, where we will pick up the rest of our stuff from the slackpack. We expect to slackpack for two days before getting all of our gear back.

We have more than 200 miles until we are close enough to home to slackpack, go to Noah’s sister’s graduation and watch his best friend get married. Let’s hope my knees didn’t set us too far behind schedule. Just a few more days and a whole state will be behind us.

Thanks for reading.
Here’s a quick video of a few moments I captured with my iPhone and iPad.

I’m hoping the videos I make in the future will be better because I’ve learned a few tricks on how to keep my electronics charged.

And, here are some photos, which may or may not be included in the video above. 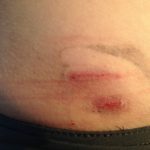 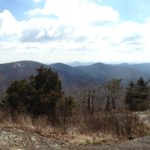 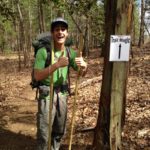 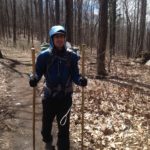 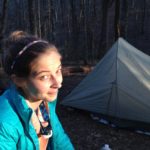 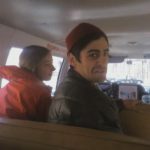 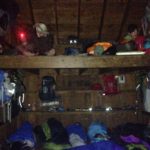 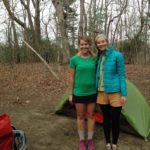 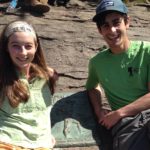 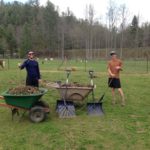 Little Guy and Smokey are full of shit, or at least their wheelbarrows are.

Catch you guys on the switchback.