For the latest, check out the update at the bottom of this post.

Last week, we posted about Kaiha “Wild Card Ninja” Bertollini, a thru-hiker who was gunning for the self-supported FKT.  On Sunday night, the same day that Karl Meltzer broke Scott Jurek’s supported AT record, Bertollini posted the following to her Facebook page:

Here’s the question many in the AT community seem to be asking: Could her time possibly be legit?

Why it’s a hard pill to swallow

The two primary sources of skepticism stem from the following:

1) Bertollini has no prior history of FKT attempts, ultra running, or anything of the sort. 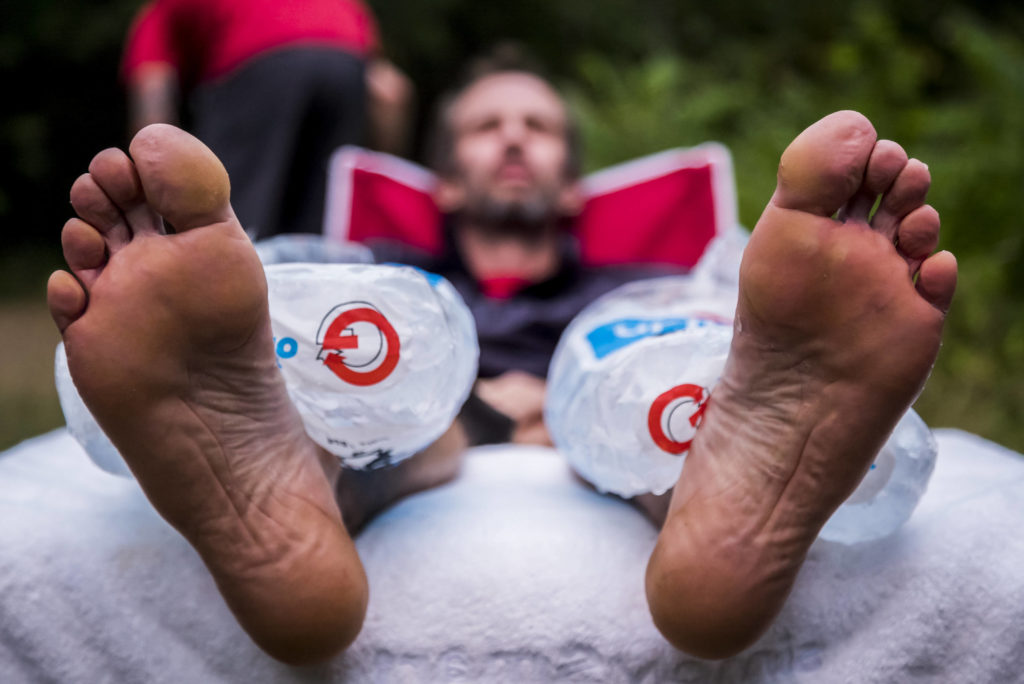 To establish a new Appalachian Trail speed record, one would have to unseat world-class ultrarunners (Jurek and Meltzer are two of the most accomplished names in the sport) and the only person to ever hold FKTs on both the AT and PCT (Anish).  She would’ve had to hike the AT’s 2,189 miles with a pack and no support system faster than legendary distance runners have without a pack and elaborate aid- receiving massages, meals, and shelter at road crossings along the way.

If Bertollini has any background in endurance sports, we are not aware of it. Her relationship with long distance backpacking dates back to only the beginning of this year, when she started hiking south from Virginia with a friend on January 4th.  After reaching Springer, she flipped back up to where she began her hike, and continued hiking north. Once reaching Katahdin (after skipping a small section in Maine), she then yo-yo’d back south, which kicked off her record attempting hike.

2) There is no GPS tracking data

Despite the unlikelihood of this feat, all of the skepticism could have been eliminated with GPS data to verify her claims. She did not carry a GPS device. Because of the impromptu nature of this record attempt, Wild Card Ninja did not research the process for what goes into “official” fkt attempt.

For these two reasons alone, her stated claim seems improbable, but certainly not impossible.

So did Kaiha Bertollini break the self-supported and supported Appalachian Trail speed record?

I don’t know.  The AT community will sort that out.  And it’s not the point of this article.

As FKT records become more lucrative and garner more national attention- resulting in book deals and exposure from Backpacker, Outside, the New York Times, amongst others- the carrot to become the new king (or queen) of the mountain grows bigger.  Whether the reasons are purely intrinsic, extrinsic, or more likely some combination of the two, I think it’s fair to state that the draw to break trail records is on the rise.

In a previous article, we stated that because Bertollini “is not carrying a GPS tracking device, and thus is not in strict compliance with FKT guidelines.” As it turns out, this is only half true (for the record, this was my doing, not post’s author).

It’s untrue because the three qualifications from the FKT proboard read as follows:

No where is there mention of GPS tracking.

Kaiha stated her intentions on her website. She passes the “open book” test, as she publicly shared many photos throughout her hike, even encouraging people to come out and “say hi”.  As for cataloging her day-to-day, she’s calling on those she encountered on trail to help fill in the gaps. 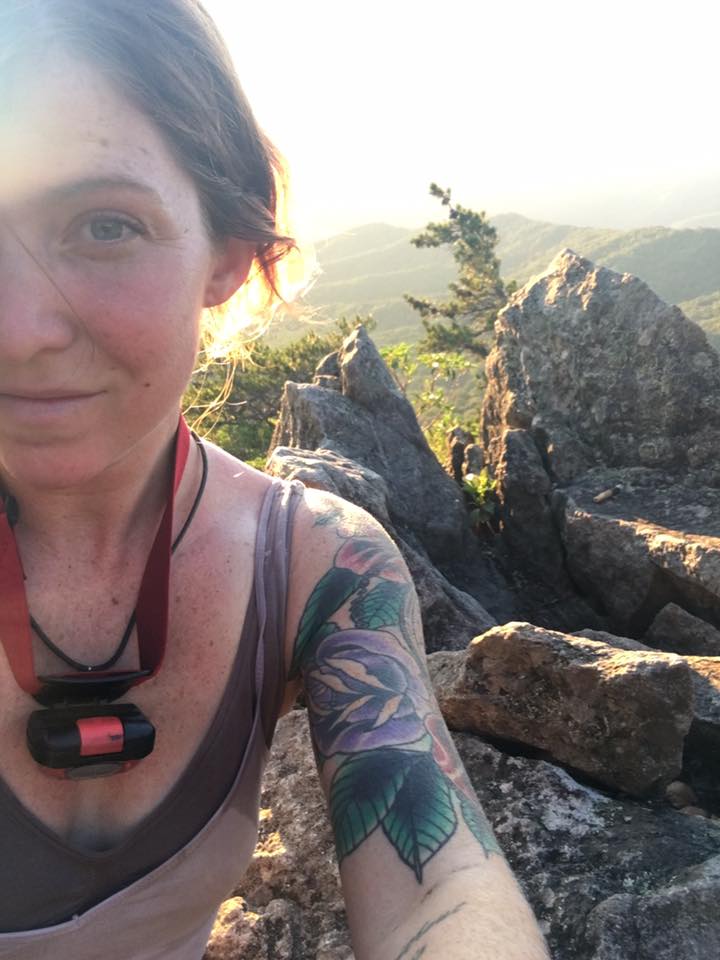 The GPS as a form of FKT verification is true because:

1) Further down the FKT guideline page, under the “thoughts on verification”, the following is stated: “SPOT and Delorme satellite trackers just might be the ultimate verification tool, and they provide a measure of safety as well. Also, it’s a lot of fun for your friends to be able to watch your progress online in real time. These are becoming standard for longer trips. Use them!” Although not a primary requirement, if you’re going through the effort of torturing your body for a month and half or more, one would think to utilize the “ultimate verification tool” to prevent this extreme effort from being invalidated in the public eye.

2) Although not explicitly required, it has become the unofficial standard for FKT attempts nowadays.  As one hiker who is heavily entrenched in the FKT world (who wishes to remain anonymous for this article) puts it, “SPOT and Delorme have definitely become de riguer.”

3) Perhaps most importantly, because of the absence of GPS tracking from Bertollini’s hike, even if all of the puzzle pieces are connected by the community, a cloud of skepticism seems destined to loom over the accomplishment indefinitely.  Since FKTs do ultimately rely on the honor system, as long as this is questioned, a large asterisks would lurk alongside the feat.

Why this is unsatisfactory

In the scenario that Kaiha did legitimately break the overall AT speed record, her accomplishment is unjustly mitigated. In the scenario where foul-play was involved, legitimate record breaking efforts by Anish, Meltzer, Jurek, Pharr Davis, and others, are grossly disrespected.

It should never get to this point.

Although there already exists stated guidelines for establishing a FKT, these procedures pose problems. First, as previously mentioned, there’s a difference between what the proboard qualifies as a FKT and public perception.  It’s possible that Bertollini will meet the requirements outlined in the proboard, and for the public to reject its validity.  As the draw for obtaining a FKT grows, as previously outlined, it’s easy to foresee similar scenarios playing out.

Additionally, at least to my understanding, there seems to be gaps in these definitions.  The proboard defines a self-supported FKT as:

“Self-supported means that you don’t carry everything you need from the start, but you don’t have dedicated, pre-arranged people helping you. This is commonly done a couple different ways: You might put out stashes of supplies for yourself prior to the trip, or you might just use what’s out there, such as stores, begging from other trail users, etc. Long distance backpackers are typically self-supported, since they resupply by mail drop or in stores.”

This definition leaves a lot open to interpretation.  Is hitch-hiking (i.e. accepting rides from strangers) allowed?  You can’t accept support from “pre-arranged people” but “begging from other trail users” is allowed.  At what point does another trail user become a friend (i.e. a pre-arranged person)?  These details may seem like minutiae, but over the course of a 2,200 mile haul, differing interpretation could result in the difference of several hours, if not days.

The unofficial system seems to necessitate someone attempting an FKT follow the protocols outlined by the current record holder.  After hypothetically posing the question of protocols to our buddy and accomplished thru-hiker, The Real Hiking Viking, he states that, “I would consider not adhering to unofficial rules about accepting rides and trail magic, but I respect Anish too much to rob her record by doing it my own way.”  Similarly, before setting out on her PCT FKT earlier this year, Carly Moree reached out to Anish to ensure she was following the same protocols (including what to do during a wildfire trail reroute, which is ultimately what derailed her attempt).

But what happens when someone follows the letter of the law (FKT guidelines), but veers from convention?  Controversy- which could otherwise be avoided with clearer language and updated guidelines.

To be clear, I’m not pointing any fingers at the people who run the FKT proboards.  They have been involved in the thru-hiking community far longer than this site.  Managing these records requires a lot of work, and it’s a labor of love. And, I’m sure, when FKTs were first introduced, no one envisioned it becoming such a national spectacle.  When the reward is notoriety amongst a small group of people, the honor system is sufficient.  But clearly, as the spotlight has grown, so too has the need for a new set of rules.

Specifically, I think this case sheds light on the fact that GPS should be required for an official FKT.  Sure, this isn’t a fool-proof system- anything shy of a constant, objective witness leaves some margin for error- but it’s a simple and meaningful improvement, and one that’s being implemented in most cases already.

Additionally, what constitutes a self-supported hike needs more clarification.  People entrenched in the FKT community are likely on the same page on this subject, but should it be mandated that someone take on a research project before embarking on a record attempting hike?  Wouldn’t it be much easier to include a few sentences of shared expectations to avoid confusion and controversy?

Regardless of whether Bertollini’s attempt comes back valid, invalid, or inconclusive, the personal attacks on her are deplorable and need to stop. You can question her feat (with stricter guidelines, we wouldn’t have to) without tearing her down as a person. Most of us cannot imagine what she has been through.  Those who can empathize with her have a new champion, regardless of outcome. Her story is courageous, her strength is admirable, and her goal is to empower other victims.  What makes the Appalachian Trail such a beautiful endeavor is the heart of its community.  Let’s keep it that way.

Although Kaiha still stands by her claim, the evidence against her does not look good.  Specifically the below timeline.

(Photo taken from the Hike for our lives Facebook Page)

Kaiha is seen at the intersection of the AT and Skyline Drive closest to Front Royal (i.e. Compton Gap). 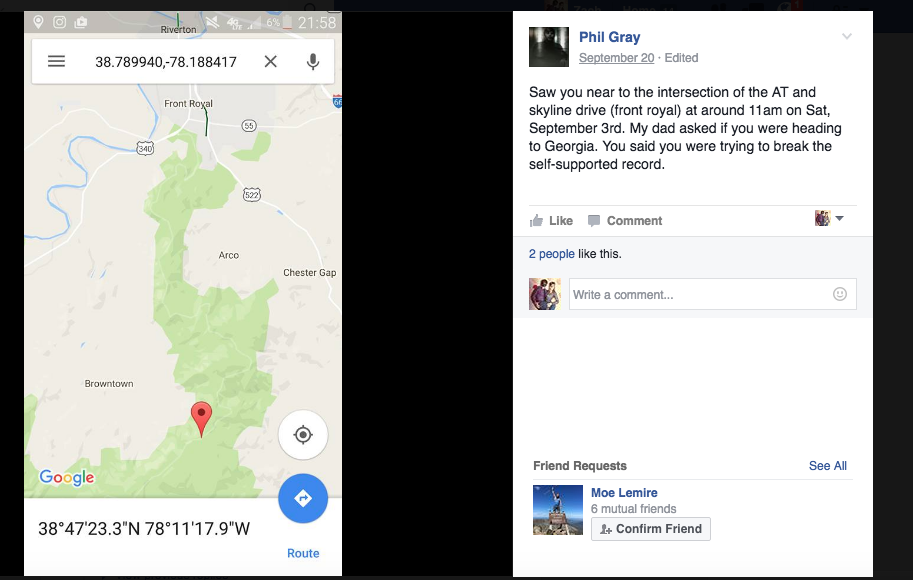 (Photo taken from the Appalachian Trials Facebook Page. Claim verified with a photo)

Billie Beartrap says to have hitched her from Swift Run Gap to Stanimal’s hostel in Waynesboro, arriving “around noon”, according to Stanimal. 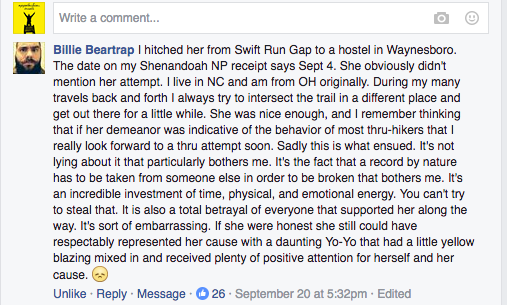 Kaiha is dropped off at Rockfish Gap, outside of Waynesboro, 45 miles south of Swift Run Gap (where she was picked up). 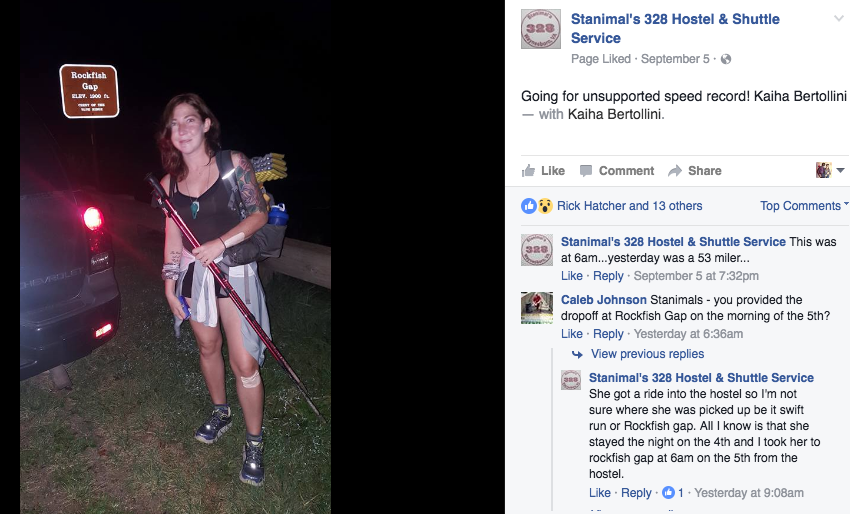 In her most recent note, Kaiha has made the claim that Billy Beartrap was lying about picking her up at Swift Run Gap, saying instead that she was picked up at Rockfish Gap.  For this to be true, based on Phil Gray’s Sept 3rd account, she would’ve had to have covered 105 miles in approximately 24 hours.  The first comment on Stanimal’s photo above says that “yesterday was a 53 miler”.

Normally, we opt to avoid the drama and negativity that can circulate online regarding trail rumors, gossip, and public shaming.  We would’ve preferred to stay hands off this as well. However- since we were the first to shine light on this story, because we respect the accomplishments of Meltzer, Anish, and those who came before them, and because people’s money was involved, we felt a responsibility to follow up with the facts.

Although it’s sad that this story has redirected the spotlight away from Karl’s incredible feat, I urge everyone in the community to drop this and move on.  Everyone who has engaged with this story has the opportunity to be the bigger person.  Please take it.