My First Shakedown (Not Quite!) Yellow Blazing and Another Ian….

So far, my only physical preparation for the AT next May has been to go for a 5-mile walk every morning with Linda.  In addition, Ian and I have scheduled some potential backpacking trips between now and then.  Some are for weekends and some are extended to 5-7 days.  These are all working around Ian’s school schedule.  He and I plan to do our equipment acquisition once he finishes his fall semester in early December.

However, this past weekend I did my first “shakedown” backpacking trip with Linda.  As a true shakedown, it was rather weak.  Seeing as it is now November in New England –  and Linda was very concerned about being cold – we booked a Saturday night in one of the AMC huts in the White Mountains.  Consequently, no need to pack a tent, we slept inside, and we had access to a kitchen with running water a stove and an oven.  Being the off-season, however, we were on our own for food.

Here are the things that didn’t get “shaken down”:

It was a good trip to check out clothing for cold, wet weather.  It was below freezing at night and the forecast called for rain/sleet/snow.  We planned an easy trip.  Friday night we stayed at the AMC Highland Center and Saturday night at the Zealand Falls Hut.  It was an easy 5.5 mile hike with some elevation.  We started at about 1,800 feet, hiked up to a ridge at 3,800, then down to the hut at about 2,800.  All in all some good exercise and significantly more than our daily walk (which doesn’t have much elevation at all).

We actually did some “yellow blazing”, but not in the “thru-hiking-the-AT” sense (no roads or cars involved).  The two main trails we took were literally marked with yellow blazes.  For the last quarter mile or so before we got to the hut, we were on the AT, so we did pass a couple of white blazes on our trek.

The weather was unpleasant on Saturday when we started out – a cold, wet drizzle.  We got to check out our rain gear a little, but hiking over the ridge generated a lot of body heat, so I spent most of the time on the trail in shirt sleeves.  As we moved toward 3,000 feet in elevation, the rain turned to snow.  Not much – less the a half inch in accumulation – but it made the trail both pretty and slippery.  We were the only ones we saw all day, and I think we were the first ones using the trail that day as we had to knock down all the cobwebs.  The light snow stuck to the cobwebs, so that they glittered like Christmas tree tinsel and it was distractingly pretty.  You tended to look at the glittering cobwebs, rather than at where you were putting your feet! 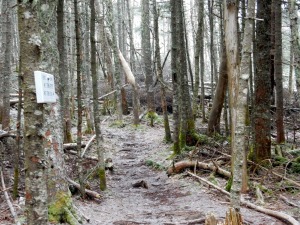 A Little Bit of Snow – Winter is Coming…. 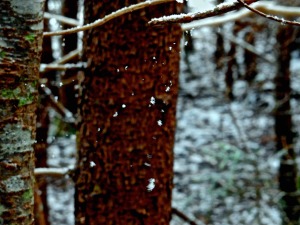 Footing was a bit of a challenge on the steeper parts of the trail,  particularly on the board bridges across the wet and muddy parts.  We both had to be careful.  I always use hiking poles and was thankful that I had them.  I also brought some for Linda.  She carried them up to the hut and back on her backpack, so I guess when she said she didn’t need them, I should have listened…..

We were a little slow, hiking up and down the elevation at about 1.5 miles per hour, but made steady progress.  We got to the hut around 2:00 in the afternoon, met the caretaker, and picked out our bunks.  There is a “back way” up to the hut where there is almost no elevation change and a simple walk of about 2 miles.  By dinner time, there were two rather large groups with younger children who came in that way, so things began to warm up (and get noisier)  inside.  It’s a good thing they did not take our route as they were wearing jeans and sneakers, which were all wet… 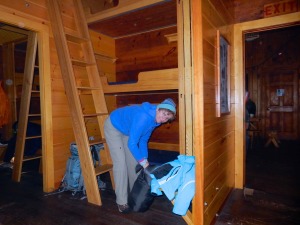 In chatting with the caretaker, we learned that he and his fiancé had just completed their thru-hike in August.  Their trail names were Coconut (because he wrote in every trail ledger how having a coconut in your pack was incredibly useful on the AT ) and Spicerack (because she carried a large variety of spices with her the entire way to improve the taste of their cooking).  They started their trip as a couple, and he proposed on Katahdin (using a ring pop) so they are now planning their wedding.  He told us the places we need to check out when Ian and I do our journey, the best trail magic they experienced, and the toughest parts of their trip (Mt. Moosilauke and Mahoosuc Notch).  He also pointed me at their trail journal, which I read as soon as we got home.

The surprising thing was that his real name was Ian.  So after deciding to thru-hike the AT  with my son, Ian, I’ve met exactly two thru-hikers where I did not necessarily expect them – and both of them were named Ian.  A strange coincidence…

Linda and I ate our noodles and sausage for dinner along with some wine as well as some cheese and crackers ( we definitely didn’t “rough it” in the food department).   After a comfortable evening of sitting next to the wood stove and playing cribbage and Scrabble, we hit our bunks by 9 PM.  We woke up the next morning to frozen pipes (so much for running water) and therefore had to boil water we got out of the stream.  After a fulfilling breakfast of French Toast (with real eggs, milk, Challah bread, sausage, butter, and real maple syrup)  we packed up and headed back the way we came.  The mud on the trail had turned into a crunchy oatmeal-like consistency after a night of freezing temperatures.  Winter is definitely on the way.

After we got back to the car and started home, we had a little scare when Linda said “I don’t know where my phone is.”  Visions of having to hike back up to the hut were dancing through our heads. Fortunately, it was in her pack and we were good, but it made me think about the need to be careful when packing up in the morning next year.  It’s a bigger deal when going back to get something you forgot means a walk of many miles and possibly a mountain or two! 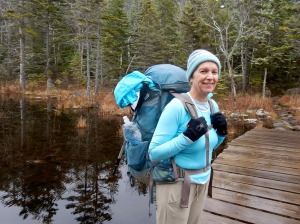 On Our Way Home

Ian and I are planning a weekend trip later this month, and then a week-long trip in mid December.  We haven’t decided where yet.  We are OK with cold, but want to minimize the likelihood of snow if we can.  I know – a hard thing to do considering it’s winter…..  Any suggestions for a good location would be welcome!