From Romania with love… (kinda)

Pe curand Bucharest! While your traffic may not reach the same decibel levels and anxiety-inducing road rage as Istanbul, you’re well on your way to achieving another notch on your belt as the “Paris of the East.”

Pe curand Sector 5, seat of the Palace of the Parliament, the second largest (after the Pentagon), but most expensive, administrative building in the world. Our apartment also happens to be in Sector 5, but is slightly smaller and a lot less expensive.

See you later Romania. You may have succeeded in keeping your herds of elusive vampires out of my grasp thus far, but I’ll be back! (I just Googled groups of vampires because “herds” didn’t seem like the right word. Looks like there isn’t really a consensus on what a group of vampires is called, but “brood”, “clan” and “pack” make the top three. I thought they would adopt the same brand as crows, who call themselves a “murder” for group get-togethers, but I guess there are still lingering bat-crow tensions that need to be worked out.) 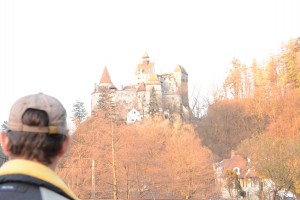 I’m on my way up to Castle Bran, the fabled birthplace of vampires and the inspiration for Bram Stoker’s “Dracula”

My relationship with Romania has become a bit strained over the past few years. We started off, Romania and I, the way most Rom-Coms do. I took dreamy strolls through the abundant and surprisingly tidy Bucharest parks. I marveled at her generosity as I bought a week’s worth of groceries for two with the equivalent of a $50 bill and had change left over for dinner at a restaurant. A quaint train ride out of Bucharest delivered me into the Carpathian Mountains where I could hike the numerous trails leading to mountaintop cafes, exchanging friendly Buna Ziua’s with other hikers along the way. Just off the trail, I occasionally witnessed honest-to-goodness shepherds as they ensured no lamb was left behind. 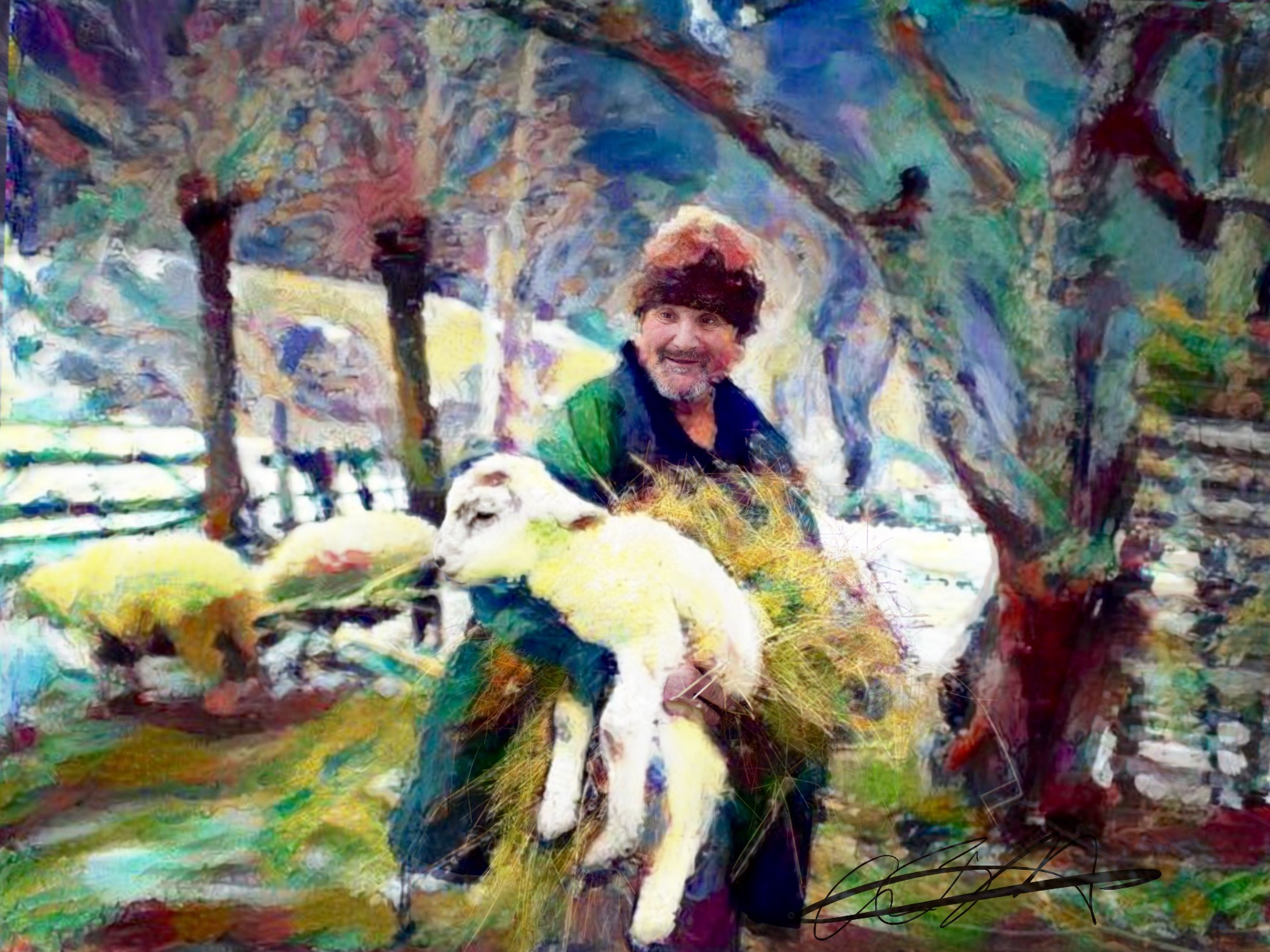 The luster of new romance faded as Monica and I began a multi-month quest to get married, a process that involved an endless series of bureaucratic roadblocks, and concluded with a 10-minute tribunal manned by three dour-faced, sash-wearing judges who were still reluctant to sign off until we humbly presented them a bottle of champagne. The city noise got louder. Shopping for meat other than pork or an aptly-named fish called “crap” became a scavenger hunt. The trains out of town were never on time, and I began to notice the stale, smoggy smell of big city.

Monica was very aware of the growing rift between Romania and I. I think she worried that I would never come back from the Appalachian Trail. She packed my last few weeks before returning to the States with several brief and intimate gatherings partly to allow me the chance to brag about my upcoming adventure into the exotic Appalachian Mountains. She also she wanted me to remember that Romania was more than traffic that seemed like Dodge-Ball in tiny metal cages, corruption that permeated all levels of society, and overworked, unhappy people chasing a tenuous Bucharest promise of prosperity.

We started by accepting an invitation to have dinner with Dragos and his family. Dragos was our first landlord. Unlike the stereotypical landlord, he was quick to respond with his bag of tools when a light bulb needed to be changed, or to preemptively replace the plumbing before leaks occurred. Exchanging rent became an excuse to get together for drinks, where I would vent frustrations about navigating the city, or learning what was undoubtedly the most difficult language to master, while he laughingly pointed me back in the right direction.

Dragos and his family moved into our old apartment shortly after we moved out. He guided me through our old digs. Gone was the snug kitchen that held the wobbly 2-burner stove I’d cooked so many slightly scorched meals on, and in its place was a gourmet kitchen with all the latest gadgets and appliances. By the time we stepped on the new hardwood floor in the hallways, I felt like I’d just bumped into an ex-girlfriend that got really hot right after I dumped her. 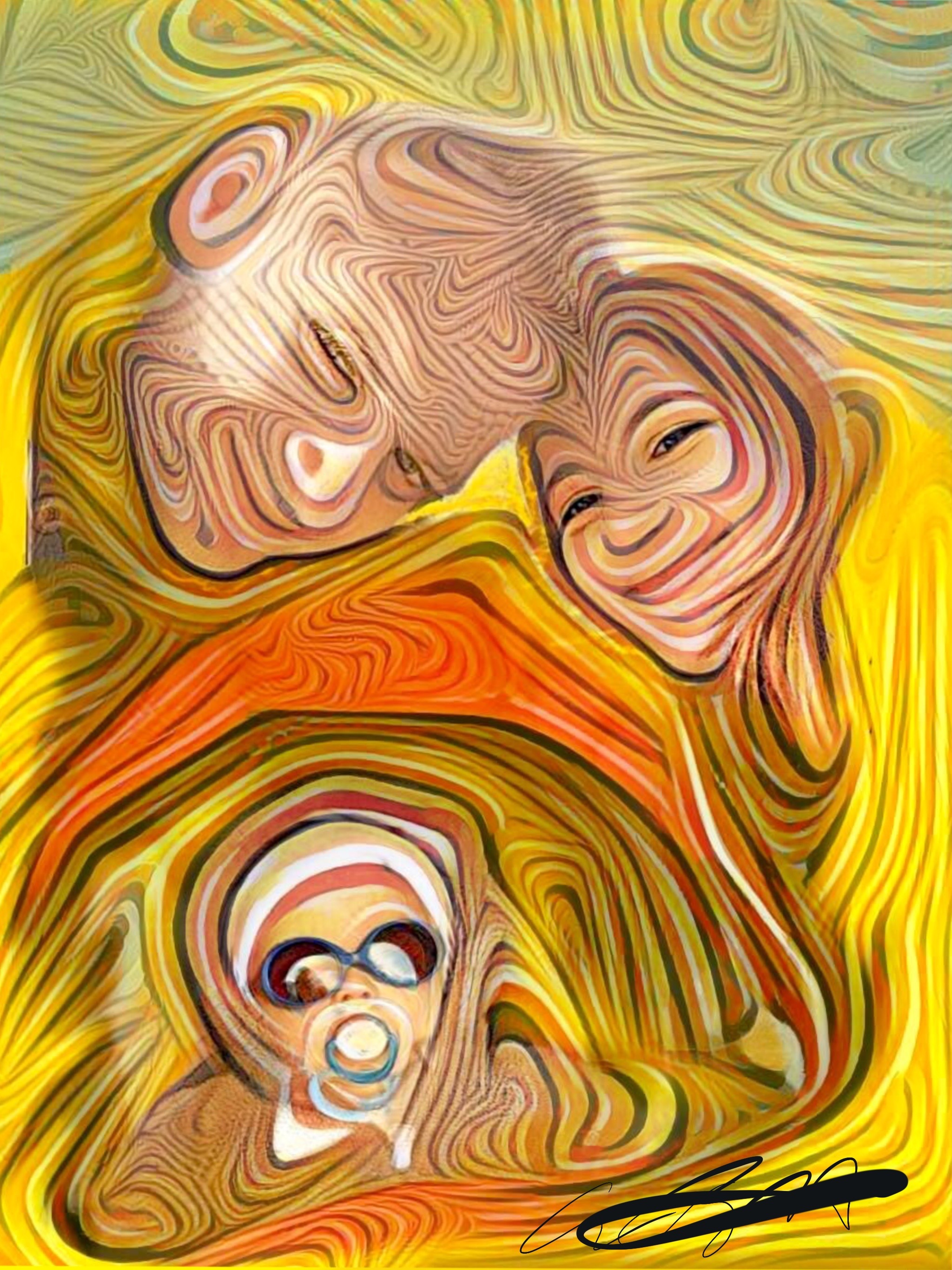 We caught up with Monica and Dragos’ wife Alexandra in my old office, which had been turned into a Disney-themed baby’s room for the 3-month old Andrei. I walked in to see a cooing Andrei reach out with his little hand to play with the tips of Monica’s copper hair. I almost had to brace myself against the wave of maternal “wouldn’t it be great if…” that was undoubtedly floating around in Monica’s mind.

Air-raid sirens sounded, emergency lights strobed in alternating reds and whites. I prepared to launch myself towards the nearest exit (as a frequent-flier, I embraced the logic behind the “secure your own air-mask before assisting others” philosophy), but noticed that they were still casually chatting about Andrei’s sleep schedule and diet.

“Does anyone else want a drink?” I asked without waiting for an answer before heading back to the estrogen-free confines of the kitchen. Everyone else picked up on my subtle cues and shifted the conversation back to me and my upcoming adventure, and me. But Andre must have been too distracted to be a team player. Instead of wailing like a banshee or dirtying a diaper, he curled up in the arms of whomever happened to be holding him at the time, looking cute and content.

Eventually, we broke into teams. The men slaved away over hot appliances in the kitchen where they belonged, while the women remained in the living room doing whatever it is that women do when we weren’t around. But we kept the alcohol with us so we won.

Next, we were off to visit Monica’s best friend Alexa (my “Sora mea din alt domn” – which loosely translates as “my sister from another mister”) in Arad, the former capitol of Transylvania (no vampires there either, I’ve checked). After a brief stay in the city, the duo of schemers had arranged for Alexa’s father Traian to provide some Romanian outdoor-survival lessons. The plan was to fish at an isolated lake until we caught lunch, then grill it over a campfire. I’d already caught one fish in my life, so I didn’t need the refresher. Traian tried not to look disappointed as the women crouched on either side of him, impatiently waiting for fish that never took the bait, while I dug out an earthen lounger so I could sketch on my iPad. 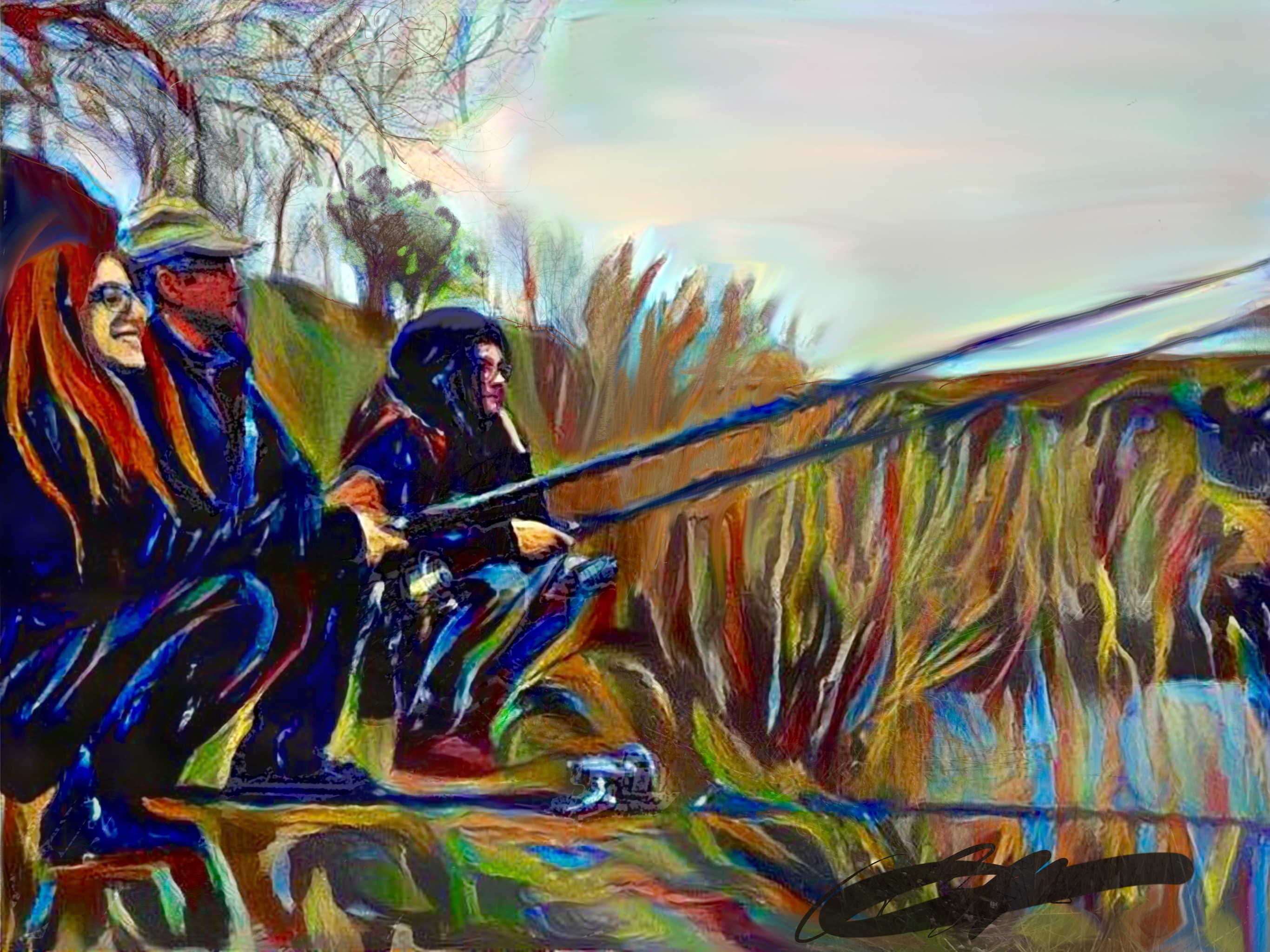 Fortunately, Alexa brought pork steaks, and onions, and loaves of bread just in case. Determined not to abandon the spirit of adventure, Traian skewered the pork steaks and showed me how to start a fire without the aid of lighter fluid. Once the flames stopped dancing, he threw onions right into the coals while we roasted our meat. The whole feast was delicious… I don’t know how well raw meat and vegetables will hold up in my pack after several days, but I think it might be worth exploring.

Back at her father’s house, he was quick to show me an 8kg pike that he’d recently caught in the same lake we (they) tried to fish in, probably as a means of proving that it was our inex 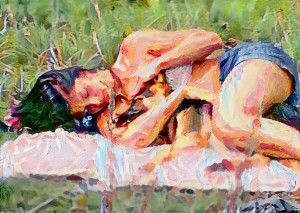 perience rather than a lack of fish that would have left us hungry were it not for Alexa’s backup plan. We ended our visit drinking homemade tuica (which is a plum moonshine that tastes like turpentine, with
extra alcohol) while Alexa played with Jackie, an extremely affectionate German Shepard that refused to give up puppyhood (her father has decreed that Jackie will start training when he is a year old, but I have my doubts as the dog seems to have everyone firmly under his control).

I couldn’t say farewell to Romania without speaking with Gheorghita again. She has become a steadfast acquaintance. I would like to call her a friend, but she’s not on Facebook, so I don’t really know what the rules are. I’ve seen her nearly every time I pass by on my way to one of the three markets I have to visit in order to prepare our exotic meals (like hummus and stir fry). She stands vigil on the same busy street corner, a diligent representative of Romanian preventative medicine, ready to shower blessings for health, prosperity and love upon you and your family in exchange for a small donation. Our conversations are more limited than I’d like, not because she isn’t friendly, but because I still don’t have a firm grasp on the Romanian language. She says she is 74, but doesn’t look a day over 70. She’s not homeless, and I can imagine (but have never seen) her grandson dropping her off each morning in a twisted inversion of a parent dropping their child off at school after sharing an encouraging word and supportive wave. 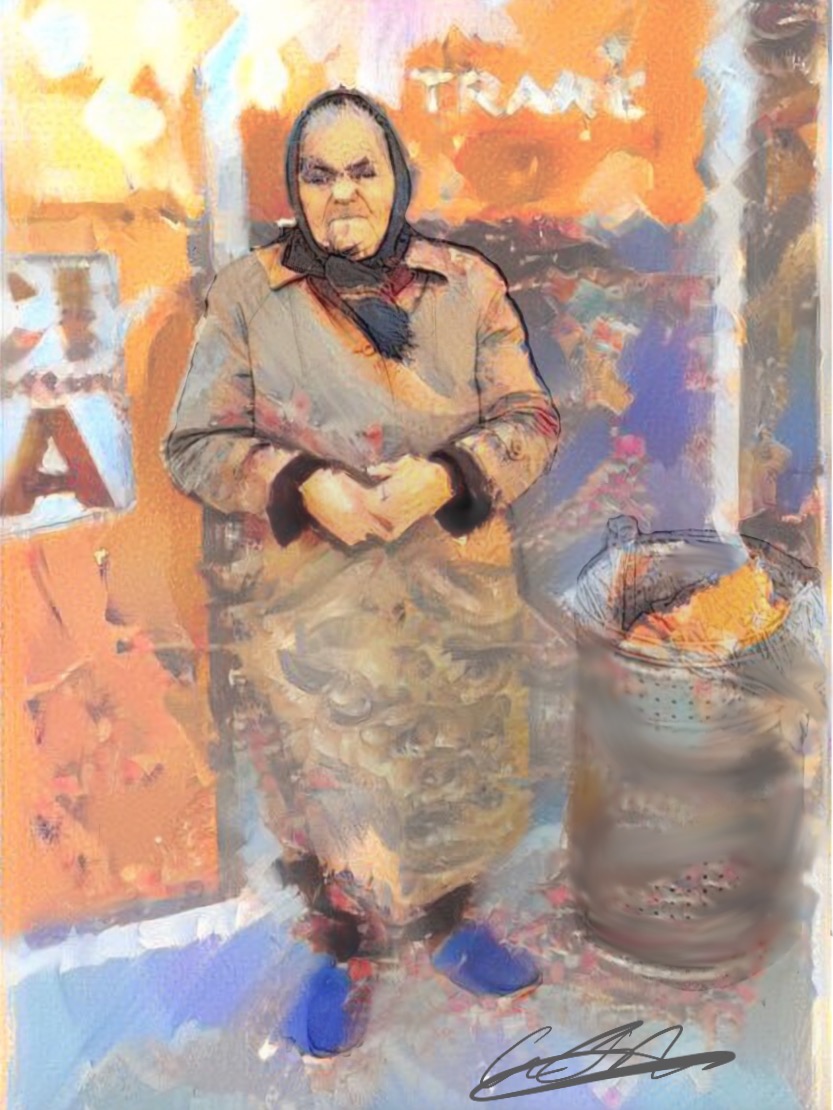 As she offered an Orthodox Christian blessing on my upcoming journey, I had the chance to reflect on the things I would be leaving behind for the next 6 months. It’s true that Romania and I are on the outs right now, and I wonder whether absence will make this heart grow fonder (as Francis Davidson penned in 1602). Regardless, I sure have met some amazing people during my time here.