For the first time since I’d started the trail, I got to see some people from home. My grandparents drove up on their way from Florida to Massachusetts to visit me in Harpers Ferry. They treated me to meals, and my very own hotel room. Not a hostel, a hotel. With two enormous beds, and pillows that were like clouds. I found myself googling how to use both beds in a hotel room. It was nothing short of luxurious. The hotel also had karaoke in its small restaurant, and my grandfather LOVES karaoke. Inasias, Peregrine, and Peregrine’s dad joined the three of us, and Peregrine and I thoroughly embarrassed ourselves by singing in front of strangers. 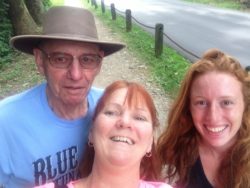 The next day I took a zero. I got to spend the day wandering around Harpers Ferry with my grandparents, and around noon we were joined by Pumpkin. Pumpkin is a girl I met on trail waaayyy back in Georgia. Unfortunately she got hurt and had to get off for a bit, but this also meant that we got to meet up today. Last I heard, she was planning on getting back on trail and finishing her hike this year by doing a sort of flip flop. 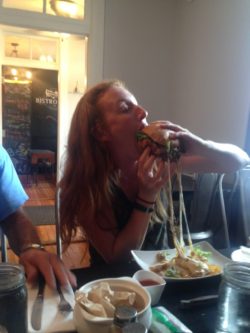 They were unprepared on how much I eat now.

I left Harpers Ferry early the next day alone. I had this irrisistable urge to do enormous amounts of miles, and have some alone time too. So I set off into Maryland with only my iPod for company and pulled some really big days. For anyone who’s interested, the mileage breakdown went like this: 24.5-21.1-15.9-24.5-26.3-11.3 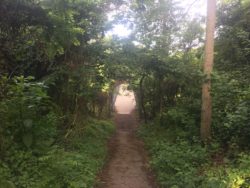 That got me from Harpers Ferry to Duncannon. Clearly, it was hammer time. The 26.3 was the longest day I had done so far. Maryland and Southern Pennsylvannia made it easy on me though, the terrain was not difficult. I kept myself entertained by playing “the floor is lava” and jumping from rock to rock.

Pen-Mar Park and the Cupid Shuffle

Just before you leave Maryland, the trail goes through Pen-Mar Park. I was not in a rush on this particular day, so I decided to hang out and have a look around.

This place was mobbed. There were so many people gathered around a pavilion in lawn chairs and on picnic blankets. I wasn’t sure what all the fuss was about, but it didn’t bother me because there was also homemade ice cream. I am easily distracted by ice cream.

So as I was sitting on a cute little park bench talking to a cute little elderly couple and eating my cute little hommeade ice cream, a band started playing music in the pavilion. Mystery solved: these people were all here for a concert. I happily continued to eat my ice cream, little did I know the best thing ever we was about to happen.

Just as I finished eating, the band started playing a song I recognized instantly. Amazement widened my eyes and I took off towards the pavilion. I jumped into the crowd of elderly folks and joined them in dancing to the “Cupid Shuffle.” I was ecstatic to be line dancing to a pop song with people three times my age. This is quite possibly one of my favorite stories. There is a video of it too, but I can’t directly upload it here. 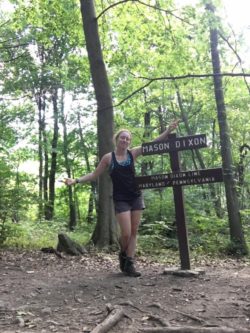 Officially in the North 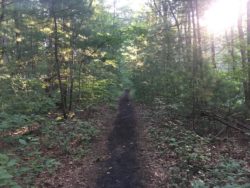 The flat section of Pennsylvannia

Because of the smooth terrain and lovely forecast, I got really ambitious and planned some long days. This whole plan immediately fell apart when I arrived at the Quarry Gap Shelter, after 16 miles. As you may or may not be aware, this shelter is the best shelter on the trail. People rave about the Fontana Hilton and Partnership because they have showers and lots of space, but Quarry Gap is where it’s at. Shout out to the PATC for maintaining such a wonderful space. 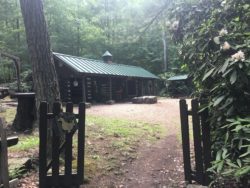 While this shelter may not have plumbing, it makes up for it with every other amenity you can possibly think of. Books and board games keep hikers entertained. The water source is in a concealed grove of rhododendrons, only twenty feet from the trail, and home to the largest frog I have ever met. There are tent platforms, group sites, and the shelter area is fenced in. They have a bear box for food storage, which also contains newspaper for starting fires. Rainy day? Worry not. You will stay completely dry in the picnic table area, all you have to do is let down the tarp that acts as a rain shield. Baskets of flowers hang from the corners of the roofing, little animal sculptures are hidden around the premises, and a swinging bench sits next to the shelter. Seriously, if you were to spend one night on the AT in Pennsylvannia, spend it here. 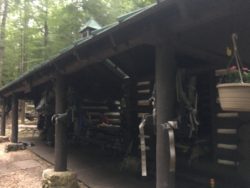 The Half Gallon Challenge

As I have previously mentioned, I frequently get distracted from hiking by ice cream. Luckily for me, it was high time for my half gallon challenge. That’s right folks, when you reach the halfway point on the AT, you’re congratulated by the opportunity to down a half gallon of ice cream in one sitting. This was the chance of a lifetime, and I couldn’t pass it up. 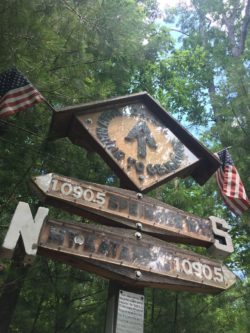 I arrived at Pine Grove Furnace at the same time as the ice cream truck did. Since the store was completely out of ice cream this was a stroke of luck. I got the pick of all the flavors and of course chose moose tracks. The one with the most calories, yes please. The only other person that did it with me was Tenacious. All the boys just watched as us girls dug into our tubs of ice cream.

I put away the tub with no issue. Tenacious and I stood, walked laps, and did lunges as we ate to promote digestion. In order to do the full half gallon, you’ve also got to get another pint in addition to the tub. I went back into the store to embark on the last leg of the task. At this point, I was so sick of moose tracks that I changed it up and finished off with cookies and cream.

The woman behind the counter picked up this little styrofoam cup and began scooping ice cream into it. After about four scoops, I thought she’d be done. Not by a long shot. This lady managed to get another 3 scoops of ice cream into this tiny cup, and she did it with the most sadistic smile on her face. I watched in dismay. How was I going to fit all of that into my stomach? How was I going to keep it there?

Tenacious noticed me struggling. “You’ve hiked 1090 miles in the blistering sun, freezing cold, snow, sleet, rain, and 80 mph winds! You’ve survived bugs and bears and mice! You’ve conquered mountains! You’ve fallen off cliffs! You CAN finish that ice cream!” And finish I did. I can now say that I am a proud member of the half gallon club. I think I’m more proud of hiking seven more miles after that to make it a 24 mile day. 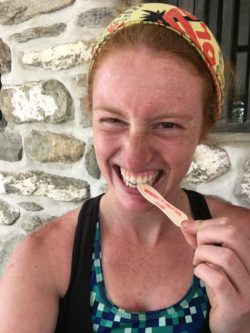 I picked a really nice day to do my longest day. The trail was easy, and I arrived in Boiling Springs around noon. I got my new boots from the post office once they reopened. I’ve got to tell you, these boots are amazing. I had the first pair for 650 miles and only replaced them because of the affectionate nickname people give the PA Rocks, “the place where boots go to die.” However, I replaced them with the exact same pair of boots. That’s how much I love these boots. I could go on, but I think I’ve made my point. 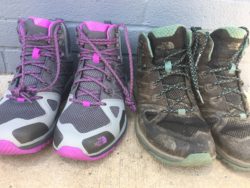 As I was gearing up to leave, Peregrines’ dad showed up, just out of the blue. I didn’t even recognize him. He was dressed in nice clothing and looked clean, so I was really surprised when he knew my trail name. Then he told me who he was and I went, “ah yes. You. I know you. Of course. Hello.” 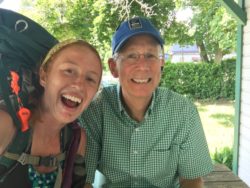 The next 14 miles is the flattest stretch of trail between Maine and Georgia. My little legs even managed to get up to three miles per hour at one point. I was very proud of myself. At the shelter I found River, who I had not seen since Daleville. 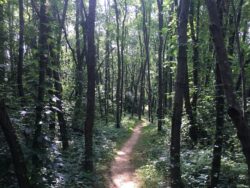 Flattest section between Maine and Georgia

Still Waiting For the Rocks

The next day we hiked into Duncannon. I didn’t actually need to resupply, my grandparents had supplied me with enough food in Harpers Ferry to make it all the way to New Jersey (seriously, I wouldn’t resupply again until just before NJ). I just wanted to shower and do laundry. Thanks to a nice stranger at the laundromat, River, Hybrid, and I got a free pizza for dinner. 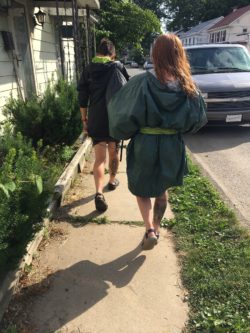 So far, Pennsylvannia and hiking alone has been smooth sailing. I particularly enjoyed Maryland. I’m still feeling great, and as I leave Duncannon with the warnings of the Rocks from Hell to come, I only have one thing to say.

As always you can follow me on instagram at erica.runs because shoot me an email at [email protected]