How I Went From GA to WV In One Month

Greetings friends! I’m sure you thought I may have dropped off the face of the earth, but life decided to add some excitement along with a few twists and turns, and every time I wanted to do a blog post, it never felt like the right time. I finally realized there is no such thing as the right time, so let’s get on with the story!

I am a month into my hike and I am in New Jersey right now. Huh? Did he just say New Jersey? Yes, that is correct! Let’s go back to the beginning, shall we?…… 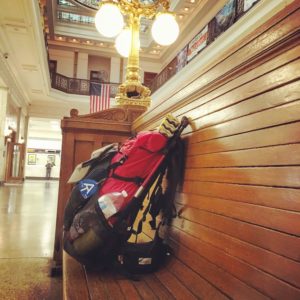 I had an awesome trip aboard the Amtrak Crescent line from Baltimore to Gainesville, Georgia. My super awesome, amazing, and wonderful cousin, Katie (totally told her I’d throw props her way), picked me up along with her children and drove me to Springer Mountain. It was an absolutely wonderful day, with the temps being in the low 70s and with a slight breeze. We all walked to the plaque on Springer Mountain where I signed the register to begin my thru hike. I can’t even begin to describe the emotion that I was having. After so many years and so much planning, this was finally happening.

After the fam walked down the mountain with me, we parted ways and I was officially on my own to begin my hike to Maine. 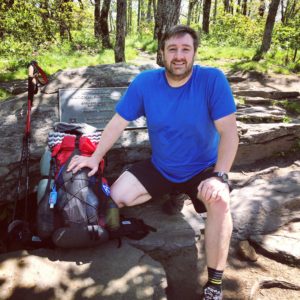 I wouldn’t be alone for long. About 4 miles into my hike I stopped at Long Creek Falls, and met a really cool guy named Jim. Jim and I would end up hiking together for the next ten days and on day four we would meet three more hikers that would join our group. 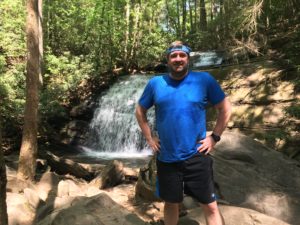 There’s basically two words that describe the Appalachian Trail in Georgia. Up and down! If you’re not going up, you are going down. That’s what it is, over and over for 80 miles. Don’t get me wrong, it’s not like this is the only part of the Appalachian Trail that does that, but for the very beginning it is definitely like having a pot of hot coffee thrown in your face. A total wake up call. I can now understand why some people drop out 30 miles into their hike. I was very glad I took the time to make sure my backpack was dialed in and lightweight. At no point did I ever think about the weight on my back as I was huffing and puffing and trying to keep my lungs from coming out of my throat. It was a little defeating at first, having to stop periodically going up the mountains to catch my breath.

Blood Mountain is the highest point on the Appalachian Trail in the state of Georgia. It is a pretty legendary climb, and even more legendary for its descent if you are heading northbound. A lot of people talk about how hard it is, but I found it to be my favorite day on the Georgia AT. It was the third day of my hike and Jim and I made it up and over and down into Neel Gap by 1 PM. It was there I had felt like I had been in the woods for a month. My appetite was huge and I wolfed down an entire large frozen pizza at Mountain Crossings Outfitters. Life was good and for the first time in my short hike, I went from “I hope to make it to Maine” to “I will make it to Maine.” Jim got one of the famous pack shakedowns at Mountain Crossings and dropped almost 40 pounds from his pack weight. You should’ve seen the look on his face when he left the store and how light his pack was. 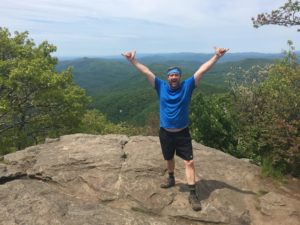 Things got into a routine after that. The following day Jim and I met three other hikers who had all started out solo as well. There was Will, Mark, and Paris. Something I have come to notice is that age isn’t so much of a factor as much as it is hiking style and personality. Between the five of us there was an age span of over 30 years, yet we all got along and had a great time hiking together.

We didn’t come right out and say “we are hiking together.” It just kind of happened. You start and finish at the same place each day and you begin to find yourself talking about where you’re going to finish the next day as a group. I really liked it, and to be honest, I am a very social person so having this group of people so early on into my hike was very good for me mentally. 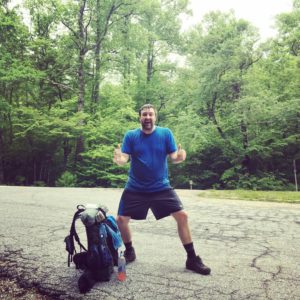 Guess who’s excited to take a shower after 6 days in the woods?

All in all, the weather was really great the first week. On day seven we crossed from Georgia into North Carolina, and Mother Nature decided we had had enough good weather and proceeded to dump rain on us for the next 18 hours. You would think this would be a drop in morale, but as we cursed our way up Bly Gap, we decided 12 miles was enough for the day as the temperatures dropped and the wind picked up. This put us at Muskrat Creek Shelter in the early afternoon. I would love to tell you why that night in the shelter was so funny, but it’s hard to describe hiker humor. In all seriousness, it was just hiker bonding and the laughs that came with it. To this day, one month into my hike, that was hands-down the funniest night I have had yet. I woke up with a sore stomach from laughing so hard. 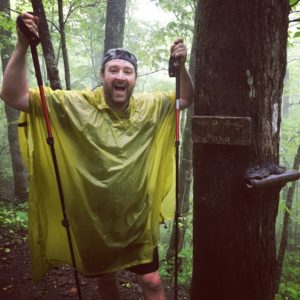 Because we had pulled off the trail so early the day before, we somehow decided it would be a genius idea to hike 22 miles the following day. The reasoning was, we wanted to get up and over Albert mountain at the end of the day instead of dealing with it the following morning. Albert mountain is the hundred mile mark of the AT, and is also a straight vertical climb to the tower at the top. When I say vertical, I am not embellishing. It is literally a vertical climb. I have to tell you though, when I got to the top I felt amazing. All of the hard miles it took to get there suddenly went away and I was overcome with euphoria. 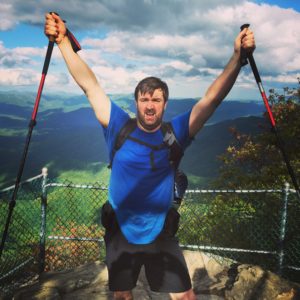 Everyone was riding a wave of elation as we walked down the backside of Albert mountain to the shelter that was 4 miles away. I was in such a good mood, that I really wasn’t paying attention and I found myself stumbling over a set of tree roots, but luckily catching myself with my trekking poles. I said to Jim who was in front of me, “Whoa, I dodged a bullet on that one!” referencing my happiness that I didn’t do a face plant into the ground. Little did I know that the stumble would have severe implications on my hike.

The following morning I woke up and as I went to go stretch inside my sleeping bag, I realized how painful my right ankle was. I put my headlamp on and looked, and my ankle had swollen considerably. The saving grace was that I only had to hike 7.8 miles that day as we were heading into Franklin, NC for a resupply and an overnight at the Budget Inn. I popped some Motrin like it was candy and proceeded to crush the 7.8 miles in no time. Maybe my ankle wasn’t so bad after all?

When I got into my room and took a shower, I realized I was not going to be able to hike on the next day with my group. My ankle and foot had swollen and the pain was just too much. 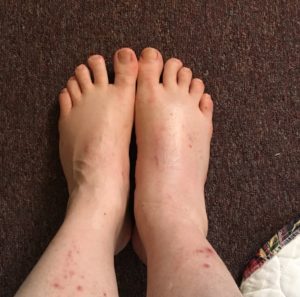 It was hard saying goodbye to Jim, Will, Mark, and Paris. They had become my hiking family and we all had a place in the group. I found them so fascinating and I really enjoyed learning about them. I honestly thought at that time, that I would only be a day or two behind them. But after a trip to the emergency room for x-rays, and the doctor telling me I needed to take time off the trail, I quickly realized that I would probably not catch them. 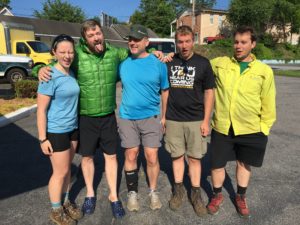 And thus began eight days of recovery in Franklin, NC. Franklin is an awesome trail town. The people were so insanely friendly and the slow pace of town life was good for my soul and recovery. However, my ankle and foot was taking longer to heal than I had anticipated. I really needed to get back on the trail and get some miles under my feet.

Knowing the immediate 100+ miles were going to be extremely difficult, I made the decision to become an official Flip-Flopper and I made my way north to Harpers Ferry, WV where the terrain would have less dramatic elevation gain and loss, along with a support network of family and friends nearby in case my foot and ankle could not heal anymore.

And so I officially became Flip Flopper #183 and with that came my trail name of “Just Tom”. There’s two versions of how I got that trail name. The main version, or rather the public version, is that every time someone asked me what my trail name was I would answer with “It’s just Tom.” The private version remains with the seven other people in Muskrat Creek Shelter. Maybe one day at the end of my hike I will share the story, but honestly, it’s more confusing trying to explain it in writing then it is to explain it verbally. 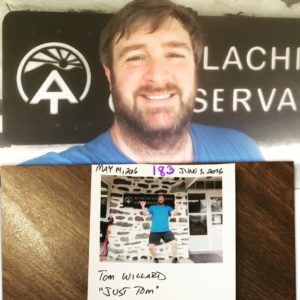 So how am I in New Jersey already? Well, that will be in the next blog post…

Haunted by a failed thru hike attempt in 2016, I am back in 2017. My head is clear, the flame is reignited, and I am hungry for the trail.