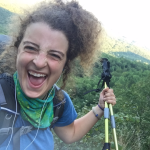 The following is an excerpt straight from my journal as Shaaades and I, two run down North Bounders, trudged through the last Hundred Mile section before Mt. Katahdin. In these journals you will encounter desperation, determination, rain, rivers, hope, and a profound longing to stay in the woods forever. Night Six, spent at Rainbow Lake Campground, is our last night in the Wilderness. It seems to have come faster than we expected.

Shaaades and I are no longer to die of hunger because Steely unloaded his extra meals onto us.

Did I tell you we were seriously low on food? When I say, “seriously low,” I mean that between the two of us, we had about a day and a half worth of food. …that’s not enough for two people for two days.

Yeah. So, thank you, Steely. Even though we’ll never see each other again, good lookin’ out brotha.

This afternoon I sat on a ledge looking at Katahdin while Shaades listened to the Bears game.

Unadulterated woods, Mama K, a huge lunch, and a live broadcast of the Bears as they slowly lose. Some things can’t wait.

Mama K is getting closer and closer, even though we’re weaving through the woods. There is a wonder, a deep feeling in my chest every time we get a view of the mountain. At this point it’s completely impossible to communicate. I mean, hell, even Shaaades and I are ignoring it. We don’t talk about our feelings much at all.

Actually, we did have a moment this morning.

We both shared songs that make us feel emotional and blah blah blah. I shared mine, and he responded with “Damn it. You ALMOST got me to cry.”

Now, hiking the AT obviously warrants tons of Lord of the Rings jokes. So when he played his, it began a waterfall of emotion and jokes.

After the song finished, we sort of sat in a bit of silence for a little while. “...I just saw my entire hike flash before my eyes,” I muttered. “GOD DAMN IT.” And with that I became an emotional wreck inside. Which meant we were both yelling at each other.

Then 12pack showed up.

“Hey, have you seen Coach?”

12pack tossed his trekking pole into the air behind him. Oh man. What happened? Well turns out they tried to hike on through the entire night, but their buddy’s foot hurt and also, you know, it was past midnight and they were exhausted. They agreed to stop somewhere and ended getting split up.

We all knew it would be alright. Truth be told we were more than elated to see 12pack. He was the first hiker we’d seen in what felt like days.

Don’t worry! It all turned out ok. Coach had just got misplaced and passed. It was cute how worried they were about each other. “Jesus you guys are worse than a married couple,” Tarzan said as he took another hit off his one-hitter. Such is bestfriendship, I suppose.

So today was another day down.

Right now I’m listening to “Sunday Candy” as the sun sets on Rainbow Lake. The loons are calling.

I realized I never feel like I’m giving you enough because I want every moment written down. Every second recorded. I don’t want to forget a single god damned thing about being out here.

Like seeing Coach eating Ramen on a rock, coming up and sitting next to him. All he said was, “I’m taking my TIME.” I nodded in agreement. The rock wasn’t incredibly comfortable to sit on. We were in the middle of the woods.

And I got up to keep moving. And I hiked on through the quiet pine.

Or when Shaaades came up behind me playing, “Into the West.” We laughed and started singing along.

Or all the times in the Whites,  like that moment at Ethan pond where Aussie and I chatted idly as the stars came out. We saw the Perseids that night. Those were the most stars I’ve ever seen in my life.

This book I’m writing in is so heavy with memories.

I miss my friends. I miss the trail and I’m still on it.

And the quiet lake is in front of me.

And my quiet heart rests.

That moment of summiting Katahdin? That moment that I had talked about with Walkamole and Garbanzo and Jukebox back in Georgia and North Carolina? It’s going to be here in a few days. I’ve been thinking about it for so long. And now it’s here.

“I can’t believe we’re there. Every day I don’t believe it more. I didn’t know I couldn’t believe something this much.”

I thought back on all those nights spent in Richmond drinking and complaining, thoroughly convinced that I would never make it. It felt like my life was over. I felt like the biggest failure in the world.

And now look where I am.

Camping at Rainbow Lake. Miles from Katahdin, officially 2 months out in the woods with no breaks, narrowly dodging starvation. I have completed all my personal goals and now I’m surpassing them without a second thought.

For the first time in my life, I’m finally living the way I’ve dreamed and more.

The stars are beautiful tonight.

This is Lil Wayne the LASHer, having hiked 1,189.8 miles of the AT in 2017! I also run a lit magazine called The Slag Review, am a ceaseless pun generator, and a cheap wine enthusiast. This is the time to live, let's all shout from a mountain top. The Trail Provides and the Dude Abides.