Katahdin and the 100-Mile Wilderness

Having completed Katahdin and the 100-Mile Wilderness, I’ve realized mirrors are far crueler than front-facing cameras. Over the past seven days I got to watch nail polish chip, eyelashes lighten, and my eyebrows wash off. I had this idea I resembled a type of naked mole-rat without the eyebrows, but now that I’m 12 days in I’ve come to embrace the natural look, or at least fool myself into believing it.

I summited Katahdin on July 1. I heard it was feared by most NOBOs (northbounders), but besides that, I hadn’t glimpsed it yet due to the dark clouds and rain. My mom and I dragged ourselves up and out of our hotel in Millinocket at an unpleasantly early time and hit the Abol Trail. She kept me company (and in good humor) for the first couple miles before turning back, and I continued on to meet the Hunt Trail that led the way to the peak. For me, that’s where the trail officially started, and I descended entirely down using the Hunt Trail, essentially know as the AT (Appalachian Trail). 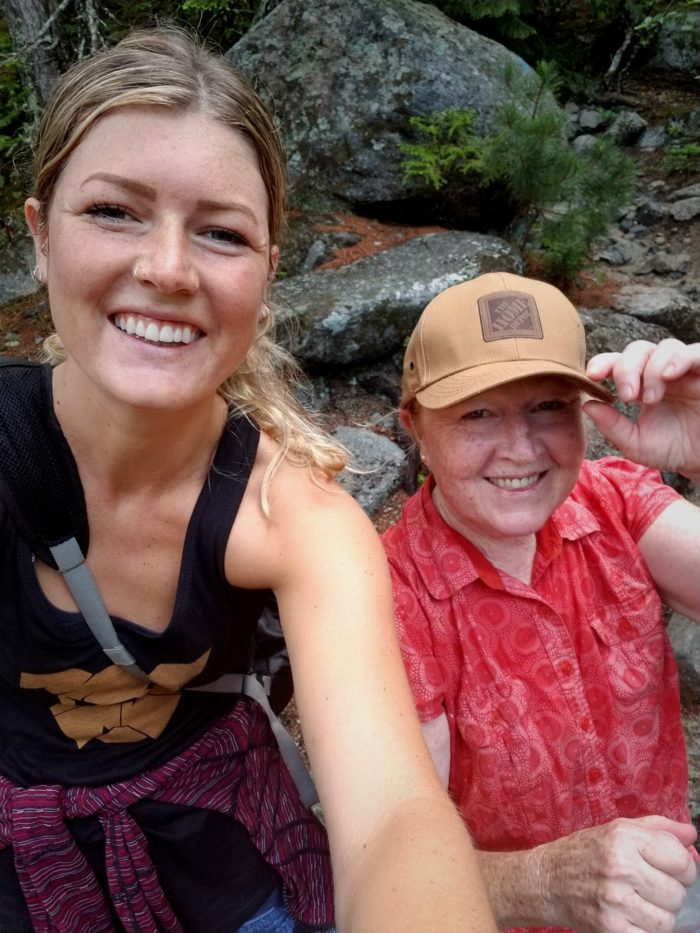 My Mom and Me

In the hours it took me I passed only groups and couples, but I climbed that infamous sign and got my first photo as a SOBO (southbounder). There was one single hiker I came across and stopped for a chat, but he seemed semi-crazy. Maybe he thought the same about me, who knows. I sat up at the top for a short time eating lunch, waiting for the clouds to move out of my way of the view, which they so kindly did. It was huge. The strenuous climb all made sense then, because let me tell you, it was not easy.

Katahdin had stones and roots to trip over, boulders to get by, and fallen trees that shorter people would find difficult to climb over. And don’t forget about its 5,269 feet of elevation.  In all of its glory, Katahdin, the highest mountain in Maine and whose name literally means “The Greatest Mountain,” was fun to summit.  It felt like an obstacle course at times; there were actual iron grips and footholds along the pathway that you’d need to use to maneuver up and down. I didn’t plan for arm strength since weights make better decorations, so it’s safe to say my arms were sore the next day. In total, it was 9.6 miles. Little did I know that was to be my shortest day I’d do for a while. Among the many benefits of your mom dropping you off on your thru-hike is your post-Katahdin meal. She waited for me and drove me back into the town of Millinocket, where I had shrimp and steak. Two ice cold ciders made for an excellent evening and I had a great sleep back in the hotel bed.

I wanted to be on the trail the next day by 7 a.m., but it was raining, and I’m not a morning person in the slightest, so it was 9 a.m. when I waved goodbye to my mom from the Katahdin Stream Campground.

My legs felt fresh so I took right off. Not knowing a pace, or having a map of any kind (extra weight/unpreparedness), I somehow managed 23.5 miles. I felt free, no matter my pack weight. I was officially let loose on the trail and I ran with that feeling. Neither the bugs, my rolled ankle from beach volleyball only days before, nor my heavy pack weight could deter those emotions. Yes, I sometimes have emotions. 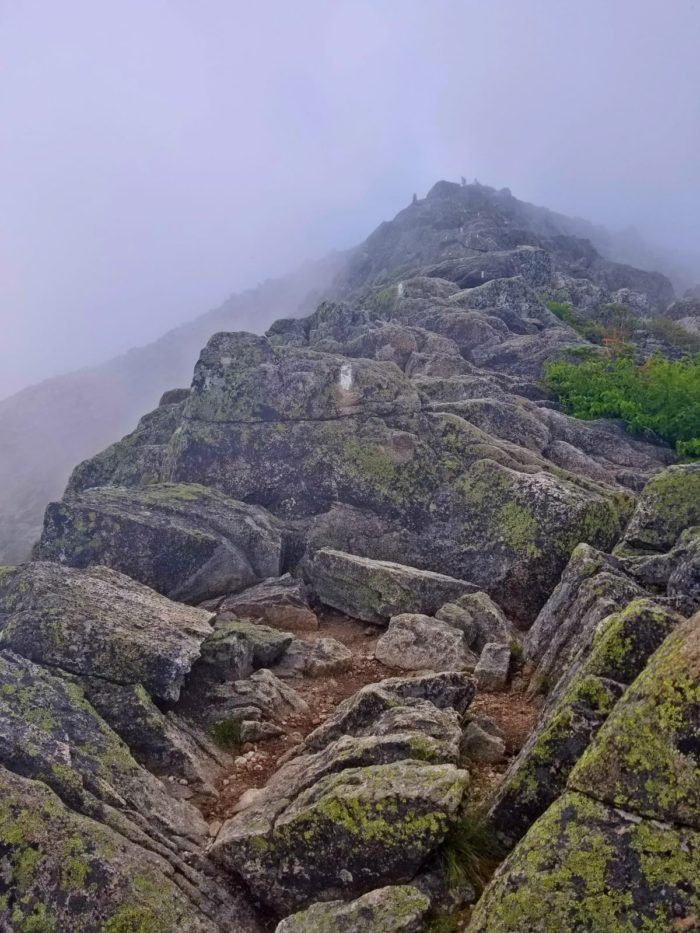 Rock Climbing, or a Walk in the Woods?

When I reached the 100-Mile Wilderness entrance I sort of just hoped for the best. I’ll be the first to admit I went into this trail knowing very little about hiking, camping, and the order of states I’ll be walking through. At one of the shelters I met two section hikers, Jay and Scott. They let me check out their map and answered any questions I threw at them because they had all the answers. So thanks for that guys, ha. I’m currently at mile 151.2, believe it or not. 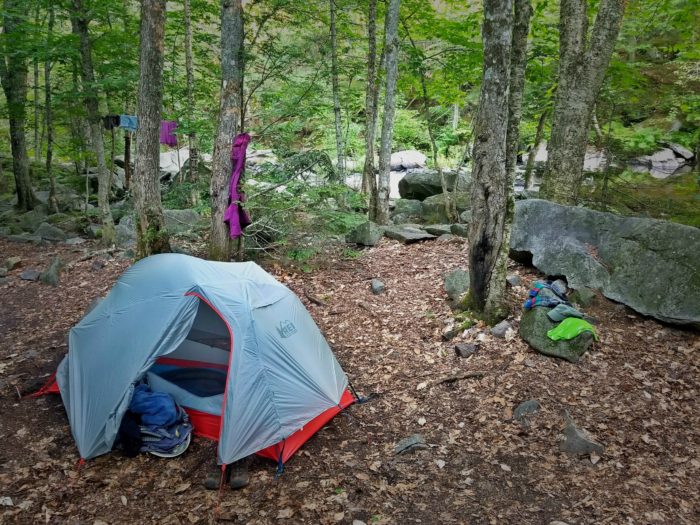 Sorry to my Canadians, but besides the occasional kilometer slipup, I’ve officially converted to measuring things in American (properly known as imperial).

I did about 15 miles to a campsite in 90 degree weather. Leeches or not, in this weather, I’m submerged in whatever amount of water I find. People came in later on and one by one they hung their food, talking about bear danger (in Maine?). So anyway, it would look bad if I didn’t, and bam, I did it. I have yet to do it since, but at least I know I’m capable.

By day four I was getting a bit nervous about my shoulders. They were bruised and purple where a lot of the pressure was resting, and I wasn’t sure if they would eventually get used to it or just plain fall off my body. Then I pulled something in my leg so I figured out a way to finish the 19-mile day at Cooper Brook Shelter by pulling my pant-leg forward in a puppet-like fashion with each step. The wilderness was very wildernessy in regard to rarely crossing others’ paths on the trail. I spent the night there, a lone tent, but I must confess that I watched a couple of Netflix downloads and ate far more than I had rationed for. Starvation would be better than carrying excess food weight on my back. 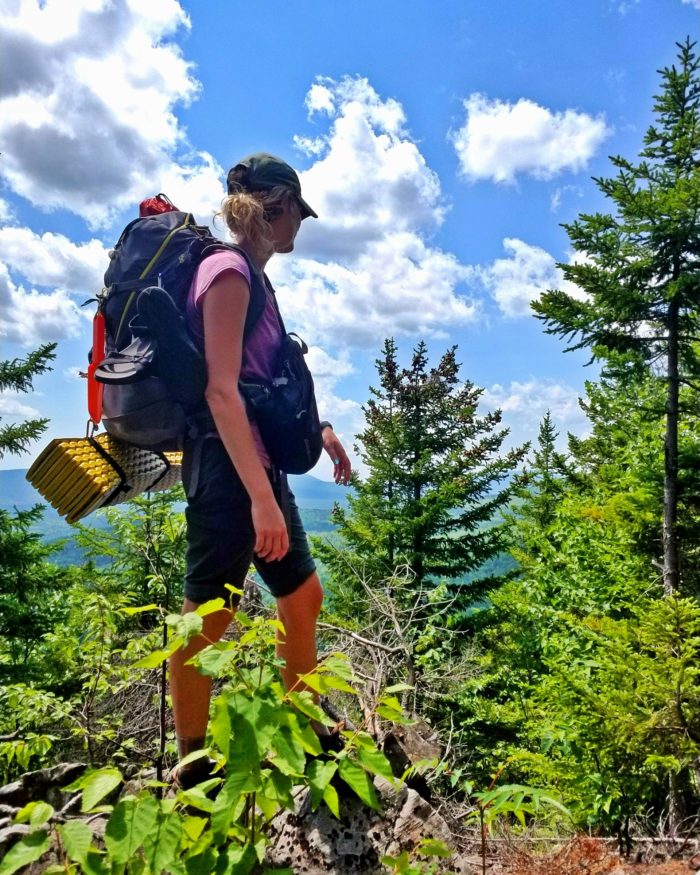 Selfie, Thanks to Automatic Timed Cameras

Eleven miles to Logan Brook Lean-to sounds easy, but it was all uphill. My puppet leg and I arrived to a group of SOBOs who left two days before me. They were good fun, awesome people, but I figured their group had formed already so I hit the trail early the next day. I was feeling pretty independent and antisocial, as I normally get when I’m first out on my own. In my rush to hit Chairback Gap Lean-to, 17 miles away, my foot caught on a branch lying across the trail that sent me face first into the brush. I tried to leap up but my bag was caught so I laid there like a turtle on its back for some time. I saved myself before anyone found me and gave me a humiliating trail name, so all is still good in the world. Dreamer (a Swede who has completed the PCT already) from the group made it that night, as well as 13 miles to Wilson Valley Lean-to the following night with the addition of OTB (an older man who is now Off The Bench and now hiking the AT). 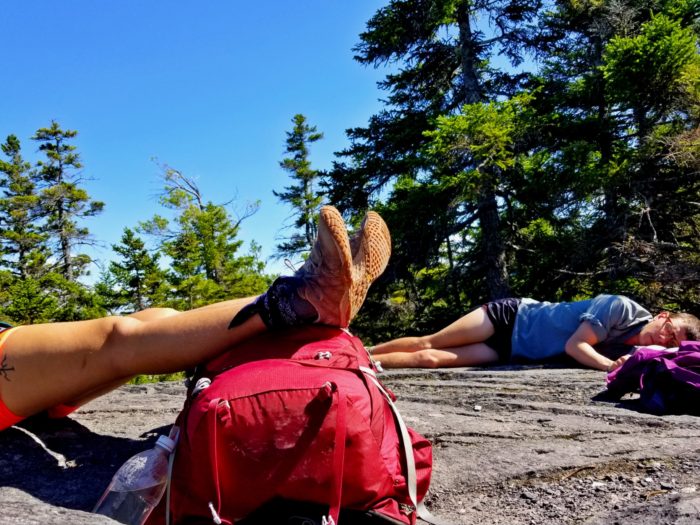 Since I Netflixed and binge ate the majority of my food the other night, OTB and Dreamer fed me a couple of bars to get me moving, then the three of us made it a hard ten miles to the first trail town that afternoon, Monson, where we were greeted with an ice cold beer and fist-bumps all around. I won’t ever forget the first milestone that really challenged us on the AT.  Also, I found out the hard way that hiking lowers your alcohol tolerance.

Just an FYI. I had to hitchhike from town to town to find one that had a public computer. Life is rough, but life is awesome.