Monson Provides, and a Shakedown Eases the Load

While I loved the beginning and the 100 miles of wilderness, it was nice to finally reach a town. Monson is the first town you come across for us SOBOs, and boy was it a welcome sight. I’d  previously sent a food package to Shaw’s Hiker Hostel from REI that had a resupply of food, so I felt obligated to stay there. Best decision ever! 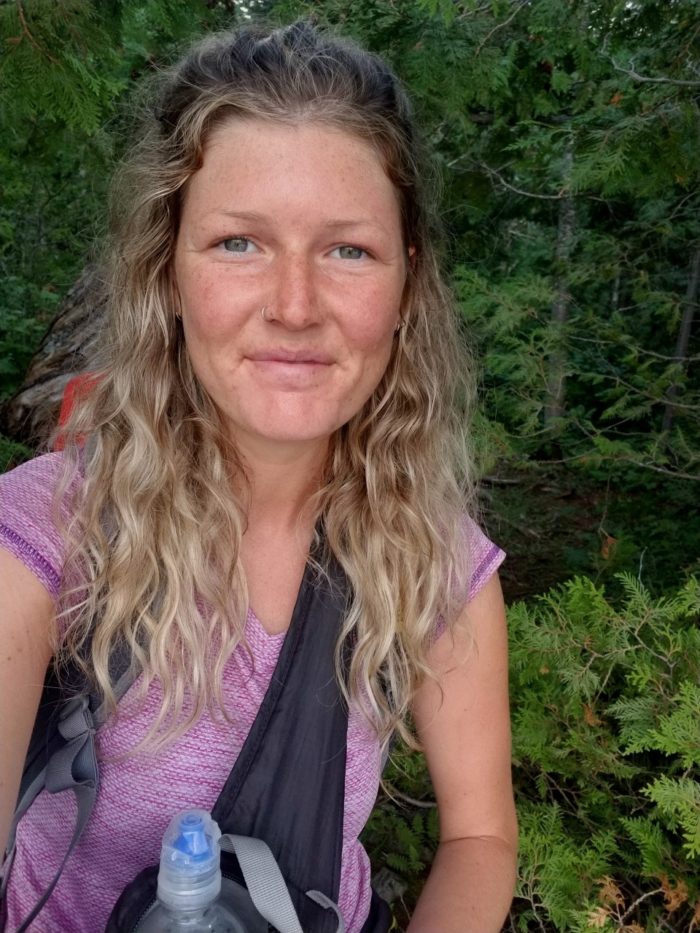 Dirtball me and my front pack.

Shaw’s charges only a small fee to let you tent in their yard, though they do have dorm rooms with actual beds. I stayed in my tent because I was afraid I’d never leave if I slept in a real bed again. Don’t get me wrong; I was extremely jealous of everyone staying in the real beds. I’m also being careful with my money, though, as it’s still just the beginning still. When I say careful I really mean the extra dollars saved are probably being put aside for cold beverages and food.

The Shaw’s shuttle came to the trailhead (free of charge) to pick us up, and Lars, a super cool dude I had yet to meet, gave me a beer within 0.2 seconds of emerging from the van. I popped out of the trunk, actually, where I was stuffed between six super smelly backpacks, so a guy running at me with a beer was a welcome sight indeed.

Civilization at last. Time to try to fit in.

I hit the shower before anyone else had a chance to and emerged resembling a real life human being again. Shaw’s even has loner clothes you can put on while you do all your laundry at once. I obviously picked the least matchy-matchy things and rolled with it.

The last ten miles into town had me salivating at the thought of fresh veggies, and I’d like to brag about the salad, tomatoes, and other greens I purchased… but I can’t. I ordered a nice burger at the gas station and a greasy slice of pizza to eat while I waited for my burger. (Shout-out to my neighbor Kathy for that meal.)

Now, a piece of hiker lingo here; a zero means a day of zero miles walked on the trail, therefore the beers kept rolling that night and I was totally OK with that, knowing the following day was my zero. Little did I know that hiking many miles a day will lower your alcohol tolerance, therefore a beer and four ciders  left me not feeling so well the next morning.

The night was a full of activity. A hostel of hikers is apparently a blast and a half. The majority of us were SOBOs that I’d met in the previous 100 miles, so it was a friendly surprise as each one rolled in. The beers were shared among the circle of us on the lawn, including Dreamer, PonyKeg, Sincerity, OTB, SharpShin, EarthSurfer, WhiteBread, Tomato, and Barefoot, and by 9 p.m. (hiker midnight) I fell asleep to the sound of tent zippers all around. I’d heard enough about 7 a.m. at Shaw’s when they have all you can eat blueberry pancakes that I knew I wanted to be present for…

But I didn’t make it. 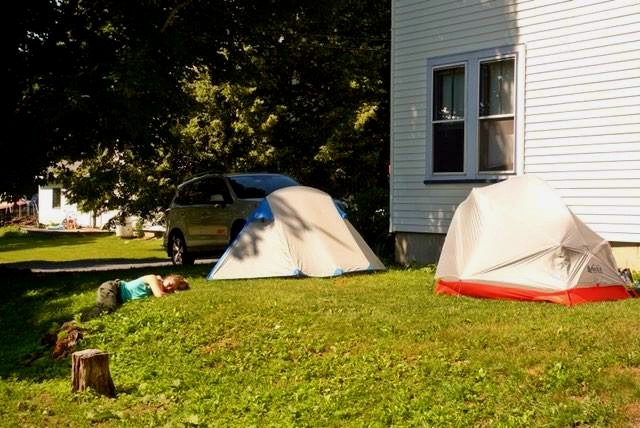 The effects of dehydration, and four beverages.

That was when I learned the hard way to always stay hydrated with water, especially when a hiker drinks anything alcoholic. May as well learn early on, right?

I woke up sweating in my tent, in direct sunlight. I proceeded then to go into a deep sleep in the middle of the shaded lawn until my headache subsided. I heard the sounds of everyone enjoying breakfast happily while I basically faded in and out of consciousness. Tomato was kind enough to bring me some water and I came back to life by 10 a.m. The rest of the day was spent sunburning by the lake and eating all the food I could get my hands on. It was not spent doing laundry, which is most hikers’ priority. Oooops.

The second half of the afternoon consisted of me drumming up the courage to face Poet’s shakedown. Now, Poet is a legendary figure I’d only heard about. He also cooks the breakfast. He and Hippie Chick run the hostel.

A shakedown is when you get rid of everything you’ve packed that you shouldn’t have. Sometimes it’s possible to believe you’re carrying something useful when really it’s just dead weight. Poet is the pro. He is behind the genius Shaw Shakedown. It happens in the gear shop shop and is recommended for all SOBOs following the 100-Mile Wilderness. There are usually hikers milling about in the gear shop, so I thought it would be a sort of public humiliation as I started this trail basically knowing squat. After much nerve building, I timidly asked him for his expert opinion and committed to a shakedown. Before I explain the shakedown, I want to point out the following morning I was up in time for the 7 a.m. breakfast, which fueled the mileage I put in back on the trail. It was as good as I’d heard.

Unless you can convince Poet that you have an everyday use for an object, he puts it in the pile of “things to ditch.” If he’s not convinced, he may laugh and throw it in the pile anyway. It was a good time. My pack went from 20 pounds to 14 pounds, which is extremely significant for a thru-hiker.

My clothes got the go-ahead to remain all with me, but I learned to say “base layers” instead of “sleep clothes” to keep from being laughed at in the future. I got rid of all my stuff sacks and replaced them with Ziploc bags, as well as my waterproof food bag, which was super heavy. Basically all food is packaged so there’s really no need to waterproof it. There will be a water filter syringe in each hiker box from Maine to Georgia so I ditched mine, too. He tossed aside my plastic trowel, because why not just use a stick or a rock? Marketing people are too good these days. I was told to ditch my bear flare too, since there are none in Maine. I’ve kept it if only for the sake of my mom’s sanity, trying to maintain good daughter status. Much to my own disappointment and future cleanliness, I left behind my shampoo and conditioner, which can be found for free in hostels along the way. My waterproof pack cover was thrown out as well, since it was super heavy for a pack cover. I actually went back later on to retrieve it but Dreamer sensibly stole it back from me and returned it to the hiker box where it belonged. (He hikes super ultralight, which I’m extremely jealous of, but he puts up with my mindless rambling throughout the day, so we’re even.) Anyway, Poet cut my rope in half because I had a ridiculous amount of it, as well as my toothbrush, which he said had the longest impractical hiker toothbrush handle he’d seen, then advised me to squeeze out at least half my tube of toothpaste. I like my toothpaste so I couldn’t bring myself to do so.

Aside from content, he helped me pack my bag properly. You could hear me coming a mile away since I previously had everything dangling from the outside. I kind of sounded like a decorated Christmas tree walking through the woods. Now I’m all stealth and stuff, since only my sleeping pad and tent poles are strapped to my pack, while everything else has a nice fit inside. Hint: compression sacks are usually unnecessary.

It’s a wonder I didn’t get stuck with the name “Front Pack” since I was the only hiker that had one. Poet definitely told me to get rid of it, but it took me days later to realize he was right, and when I did, I felt like a real life hiker. 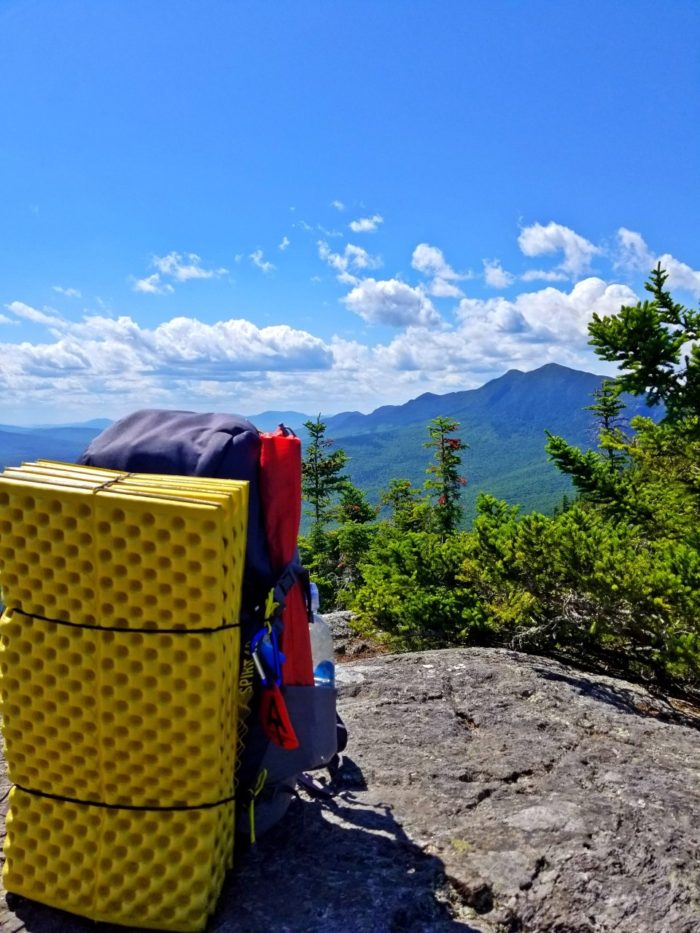 My new and improved pack.

All-in-all, it was hardly public humiliation, and I 100 percent recommend everyone to stop in to see Poet because he’s awesome to say the least. Last thing. I still carry a stick of deodorant and there’s no chance I’m ditching it. Sorry, Poet!

Briefly here I want to touch on the actual physical demands of the trail. Zeros exist for hikers to rest their bodies – I think. Blisters and rolled ankles are popular topics among hikers, and I’m almost sad to say I couldn’t contribute much among the circle in that way. I don’t know how it’s possible but aside from my minor leg issue, I have nothing wrong with me. Cross your fingers and wish me luck as I might have just jinxed myself, but I have a good thing going here and I hope it continues this way. 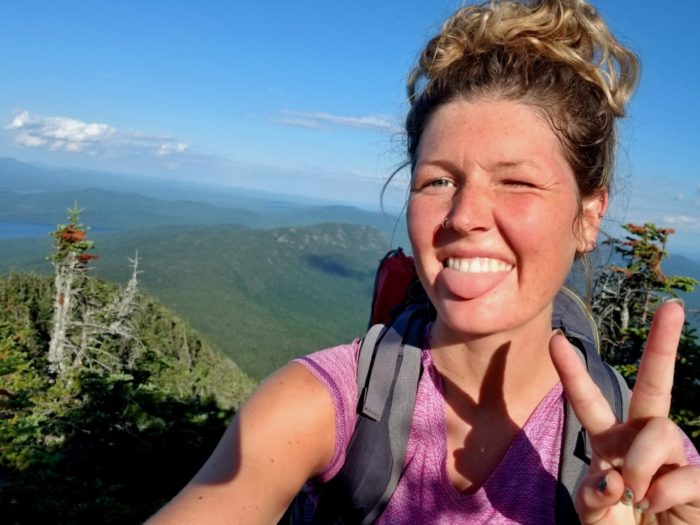 Back out on the trail I go.