Lessons Learned from a Back Garden Campout

Over the winter months I’ve gradually been gathering my hiking gear and starting to test it out. By mid-January I’d got to the point that I had enough gear to spend a night in my tent. I’ve now spent a grand total of two nights in my tent. For these first nights I opted for the very exotic location of my parents’ back garden. This meant if it all went wrong a warm bed was only meters away.

When it comes to camping, I am not a complete beginner. As a child many family holidays were spent in a tent and my time as a cadet gave several opportunities to sleep on the ground. Additionally, I have in fact spent two whole summers living in a tent. But these tents had beds, fridges, cookers, and electrical sockets. From a backpacker’s point of view, it should probably be described as glamping. Glamorous as it sounds a tent is still a tent; they were unbearably hot in the heat, leaked in the rain, shook in the wind, and you still had to walk across the campsite if you needed the loo in the night. Despite these experiences I’m still pretty apprehensive about my decision to live in a “proper” tent for six months. 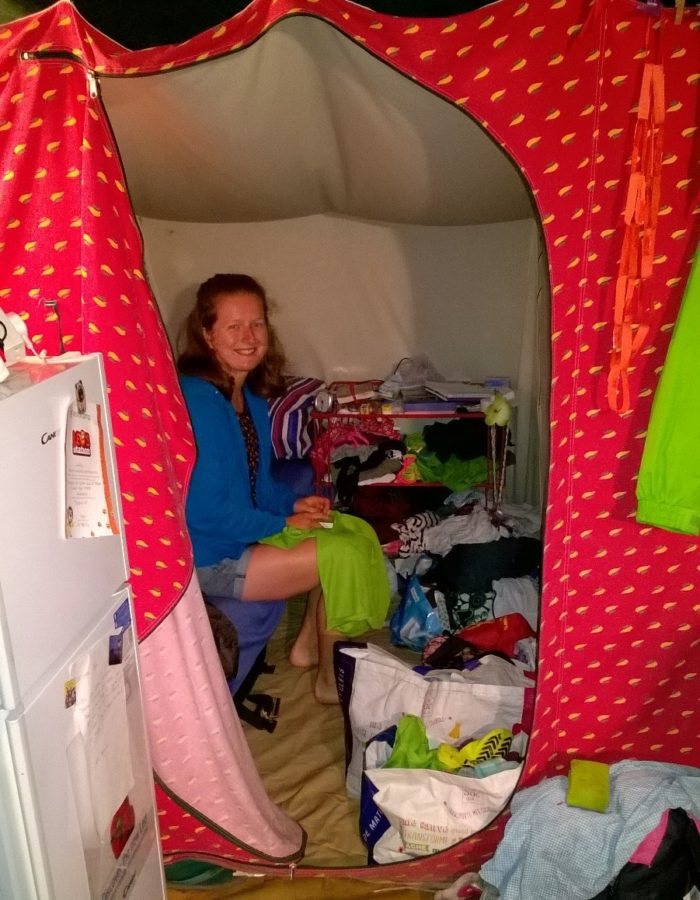 Glamorous it was not.

The tent in question is the REI Quarter Dome 2. This is a two-person tent. Yes, I’ve bought a two-person tent just for myself. Or as I’d describe it: a one-girl-and-her-pack-tent. One-person tents are designed to fit one person. And nothing else. While I could definitely survive in a one-person tent, the idea of my whole enclosed floor space being taken up by my sleeping pad makes me feel a bit claustrophobic. In my tent I can have my sleeping pad down one side and my pack down the other. Having the extra space obviously comes with a weight penalty, but to me at this point it seems worth it. Whether or not my opinion changes after I’ve carried it around for a few weeks, I’ll have to wait and see. 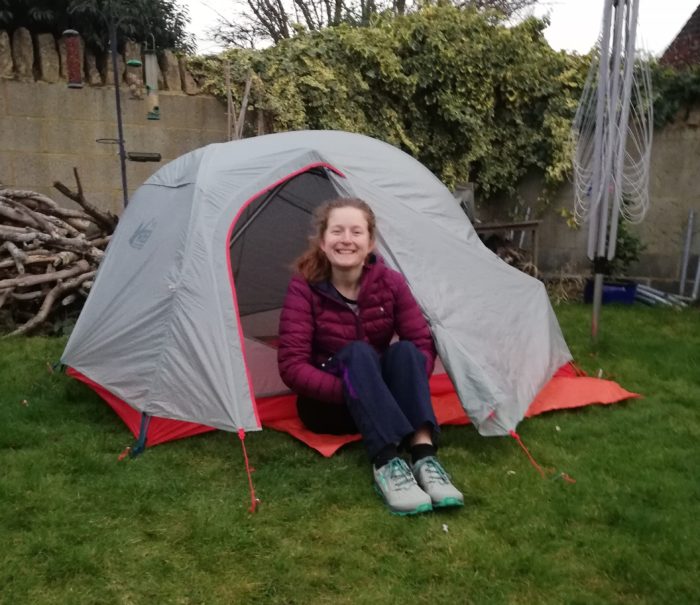 For my sleep system I’ve opted to go for a quilt (Sea to Summit Ember EB III). Quilts are essentially sleeping bags without the hood and without a back. I’ve gone for a quilt to save some weight and because I’m hoping it’ll be more convenient. Quilts are slightly less constrictive than sleeping bags as you can either fasten them to your pad, forming a little cocoon for yourself between the two or, when it’s warmer, you can use it like a blanket. Some hikers will carry a heavier winter sleeping bag and swap it out for a lighter one in the warmer months. I’m planning on carrying my quilt for the whole thing, gradually unzipping it as the weather gets warmer.

I’m using an inflatable sleeping pad, the Therm-a-Rest NeoAir Xlite. This is a very popular option and so far the only negative I’ve read about it is that it’s noisy. I have to agree. I don’t know what it’s made of but whenever you move even the slightest amount while lying on it there is a lot of rustling. But I reckon that’s a small price to pay for comfort! Having only ever camped using thin foam roll mats I was amazed how comfortable this thing is. It’s a lot thicker than I was expecting and also provides a lot of warmth.

So. How did my back garden campout go?

My first campout was only the second time I’d put up my tent (the first time being in my parents’ living room) and I was amazed by how quickly I did it. The hardest part was getting the fly sheet the correct way round. This became much easier once I realized it was inside out. The color coding system and the fact that all the poles are joined together makes the whole task really straightforward.

I set the tent up in the late afternoon when it was still light, then went about the rest of my day as normal. At about 10 p.m. I packed everything else I thought I’d need into my pack, then headed to the garden. After I’d got my sleep system set up I made one final trip into the house to use the bathroom. I hadn’t really been feeling the cold yet but the contrast of stepping back from the warm house into the cold night made me wonder why I was doing this. For a moment it all felt ridiculous. Why was I sleeping outside when there was a perfectly good bed inside? Why was I doing any of this at all?

But as I turned away from the house the sky caught my eye. It was a perfectly clear night and there were dozens of stars out. Living in a small village means there’s very little light pollution and I’m quite accustomed to seeing the stars, I often pause to look at them outside the house. But in that moment I couldn’t remember the last time I’d stopped to look. The last few months had been so busy that I’d barely had time to stop and look around me. As I gazed up at the stars I remembered why I was doing all this. The small amount of effort that it was taking to camp in my back garden had already rewarded me by allowing me to stand and look at this beautiful thing. How many moments like this will I be able to experience if I put in the final push to get myself onto the AT?

The lowest temperature of the night was about 3 C (37 F) and I could see my breath in front of my face, so I was braced for a pretty chilly night. To start with I didn’t feel cold in my quilt, I was aware that it was cooler round the edges than a sleeping bag would be, but by tightening the cord around my shoulders I felt pretty cozy. I fell asleep pretty quickly but woke up twice in the night feeling cold. The first time I dug a fleece sleeping bag liner out of my pack. I won’t be taking a liner as thick as this so I tried to hold off using it for as long as I could, but eventually caved. The second time I woke up I put my puffy coat on, I then slept soundly until 7:50 a.m.—almost a lie in for me! 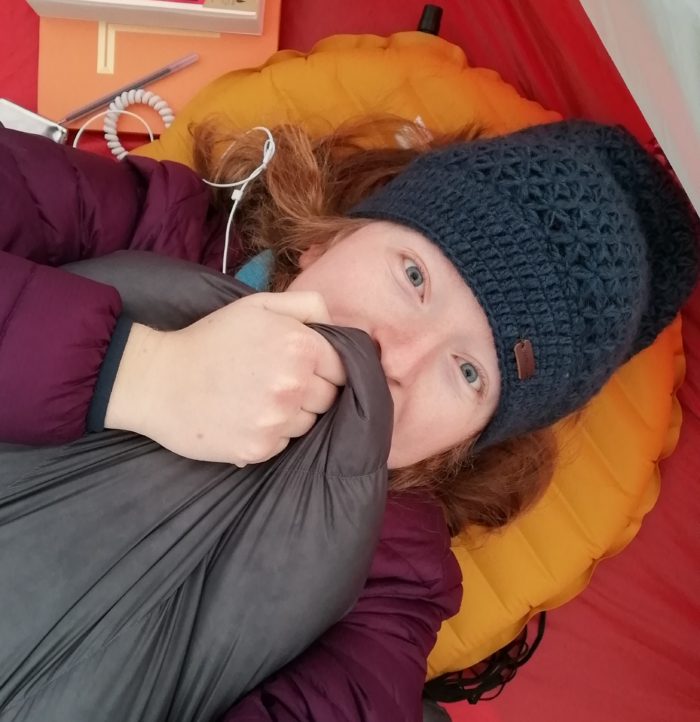 I survived the night!

When it came to campout round two I deliberately chose a cold night. I think it got down to about -1 C (30 F). There had been a few additions to my kit list since the first night, including an inflatable pillow (Sea to Summit Aeros Premium), a thin sleeping bag liner, and a Tyvek ground sheet.

The pillow may be considered an unnecessary item by many hikers. Initially I thought that I’d just use spare clothes as a pillow but after one night in my tent I realized that I would be wearing all my spare clothes to sleep in. Anyone who knows me will know that I value a good night’s sleep above pretty much anything else when preparing for a challenging day. If carrying a pillow allows me to get this good night’s sleep then I’ll happily carry the weight. Once it gets warmer I may ditch the pillow and use spare clothing instead. My logic is that it’s easier to get rid of a piece of gear once on trail than it is to try to source a new one.

So far, my Tyvek groundsheet is the only piece of gear that I’ve made myself. I didn’t want to pay for the “proper” footprint for my tent so looked at ways to make my own. Tyvek seemed a popular choice. Having never used this material before I was expecting a large sheet of plastic. What I got looks more like a large sheet of paper. 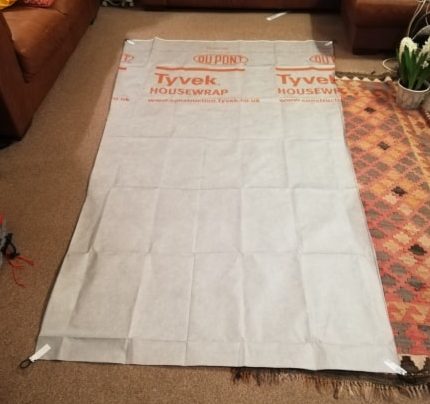 One big piece of paper.

Obviously, it’s not actually paper. It just looks like it. I didn’t believe that it was waterproof so left an off cut in a sink full of water for an afternoon. As soon as it was removed the water ran straight off and left no damage. I also thought it looked like it would rip easily, so I tried my best but couldn’t rip it with my hands. I therefore decided it must be worth a shot. I cut it to the size of my tent and used Tyvek tape to attach little loops of elastic to the corners. To be honest, I’m still a bit dubious but it did work well under my tent and is very light. It’s quite bulky as it doesn’t squash quite as well as a fabric would. At the moment I’m folding it to about A4 size, then sliding it down the back of my pack, but once it’s wet and dirty I imagine I’ll attach it to the outside of my pack. I’m still worried that I’ll look ridiculous when I get this thing out on trail, but if it works, it works.

For me, the biggest difference about this second night was that I put my layers on before I got cold. I started the night in my puffy coat and made sure my quilt was tightened as much as possible before I tried to sleep. My legs and feet did still feel a little chilly and at one point I added an extra pair of socks. I’ve since bought a pair of down slipper socks (Montane Fireball Booties) and am on the lookout for some new leggings to add that extra bit of warmth. 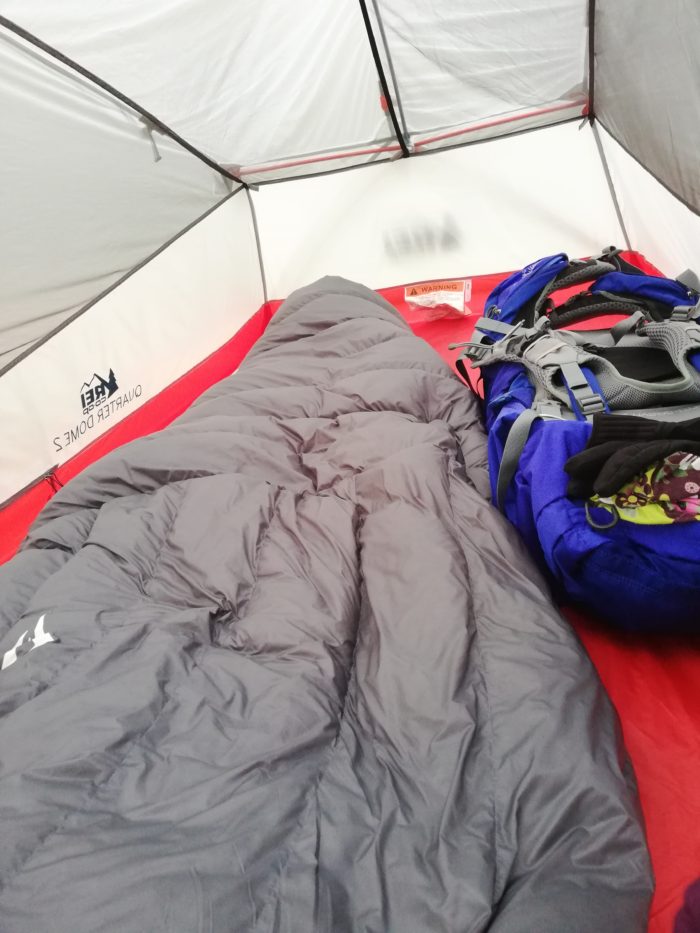 Overall, I’d classify these two nights as a success; my tent stayed up, I didn’t freeze, and I did actually get some sleep! Although this was a very gentle introduction to backpacking life I’m very glad I did it and may even have learned a few things along the way.

My main takeaways from these two nights were:

Can’t wait to put this all to the test as I head out to some actual hills next week.