March to the Sea

As planned, we got a typically early start this morning, desiring to walk more miles in good weather today, anticipating wet weather to come (soon).

While still in Santiago we passed a lone hiker who followed us in the dark for some time. When I realized that he was keeping up, I talked with him, and then he and I walked together talking for a few hours.

This was Ignacio, a retired Spanish bank director who has hiked the Camino 6 times. Fun to talk with, and good exercise for my Spanish skills. 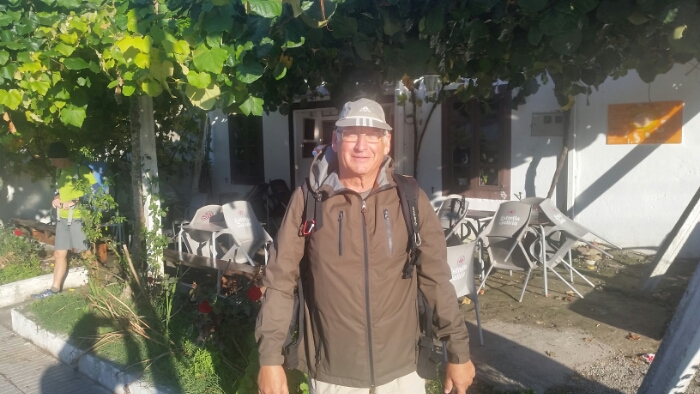 One thing Ignacio pointed out was the number of tall Eucalyptus trees. Once he pointed these out it seemed like we saw them all over. This is a fast-growing tree that’s grown like a crop, then harvested for pulp. Ignacio said there used to be a lot more pine trees, and in general felt that these are bad for the environment.    Just before we parted from Ignacio, we all sat under a vine covered patio area (of a bar that was closed). On second glance, the vines were both grape and kiwi, both bearing fruit. The kiwis were hard, unripe, and Ignacio said they’re uncommon in northern Spain. 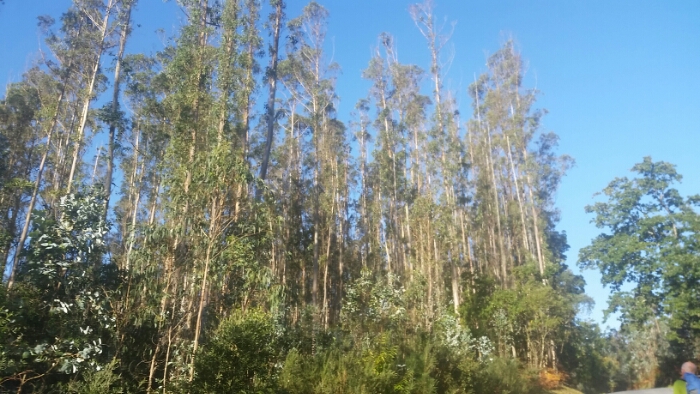 Another beautiful day, though with a lot of climbing (ups and downs). Some lovely towns too.
Walking into one town we heard Galician bagpipes, and felt that we were being piped into the town.

There was a piper going at it (and playing well), next to the door of a building from which additional piping sounds emerged. He was in the shade on a sunny day, so I don’t know if my photo came out well, but still… cool. 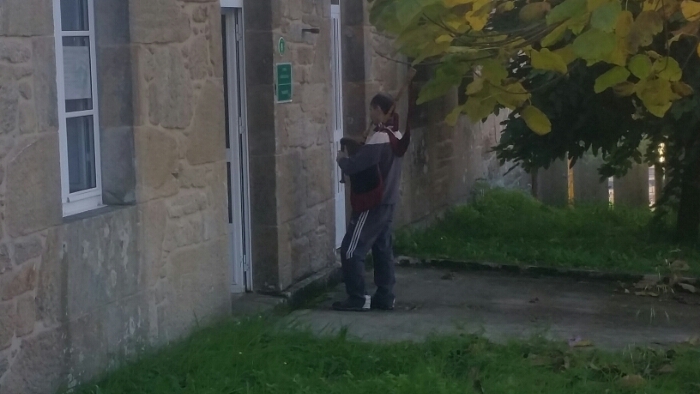 Piper near entrance to town

We saw more hunters, with dogs in trailers, particularly at a little store/bar in a village where we stopped to buy sodas and eat snacks. I asked what they were hunting, and the reply was “conejo y perdiz”. I knew that the former is rabbit, didn’t know the latter, so the guy smiled and flapped his wings. Turned out to be partridge. Friendly folks. 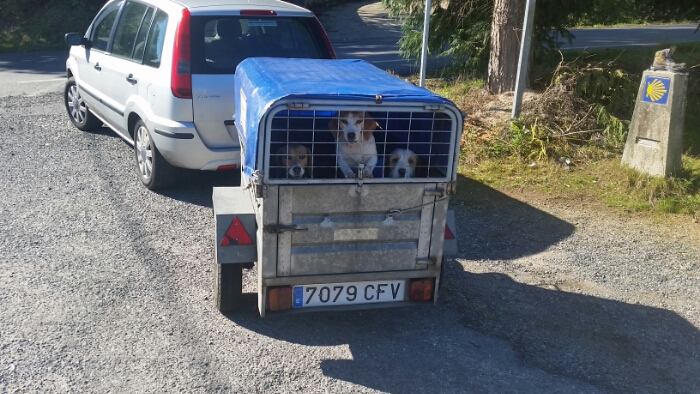 We got to our Albergue (Parrois O Rueiro) a bit before 3, in the village of Vilaserio. When we checked in, we were the only ones in a good sized room, but then an English speaking Frenchman named Patrick arrived, followed by Vladimir, a Russian who has driven a taxi in Duesseldorf for 15 years – – no English, but he and I can talk in German. Then Heidi from California, and then others. So somewhat of a full house. 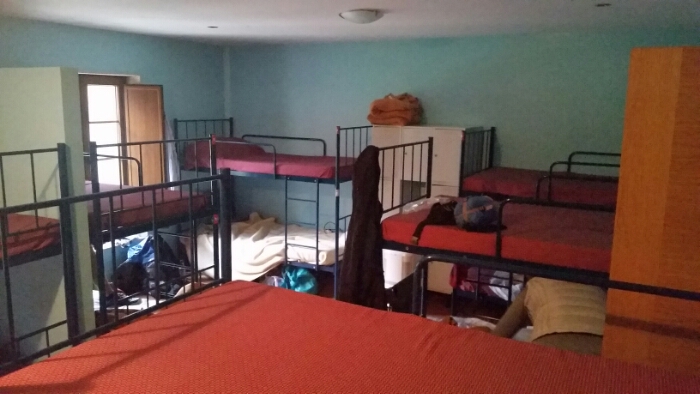 Overall a good Albergue with the exception of insufficient electric sockets. Note that where typically a U.S. wall socket can power two devices, a Spanish socket powers just one.

We were efficient enough to get our clothes drying in the sun, but later in the afternoon the anticipated clouds rolled in before everything was dry.    Not to worry, there are indoor drying racks.

We racked up 21.5 miles, about 34.6 kilometers. With the climbing involved, it was enough!

For our evening meal I sat with Vladimir and Milky joined us. The conversation was a little awkward insofar as Vladimir and Milky couldn’t talk to each other directly, but fun and interesting anyway. Vladimir served in the Soviet air force in his youth, stationed on their border with Japan about a year before I started my service in Germany. It was fun hearing his perspective on the cold war of that time. He’s been a taxi driver in Duesseldorf for 8 years now, and has driven people of many nationalities around, and so had interesting perspectives in that way too. His fundamental comment was “people are people”, regardless of where they’re from.   Worthwhile for us in our country to keep in mind that, for example, most Russians are basically decent and want much the same sorts of things we do, regardless of their current government. And of course, vice versa! 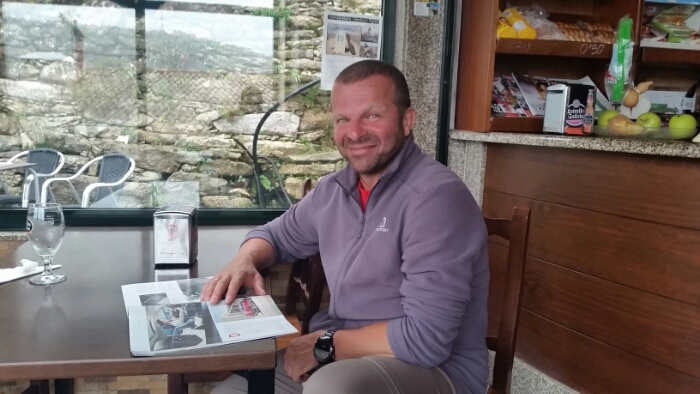 Our anticipated rain showed up as predicted the next morning (Oct 26th). We got started hiking at 6:30, but note that daylight savings time changes a week earlier in Europe than it does in the U.S.,so we had just “fallen back” one day earlier.
After we had walked perhaps a half hour, the rain lightened up, and then stopped. Lots of wind, and some dramatic clouds in a dynamically varying sky, but other than from perspiration we stayed dry from there on – – – very nice. 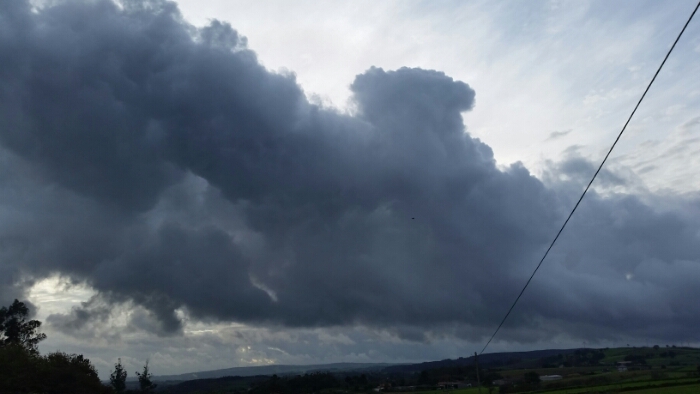 A lot of dairy farming in this area, including a couple of decent sized operations, but several smaller ones too.

Beautiful scenery again today, and again verdantly green. At one point we walked close to some wind turbines, and the sound of the blades turning in that wind made me think of the slow, steady wingbeats of some prehistoric flying lizard. 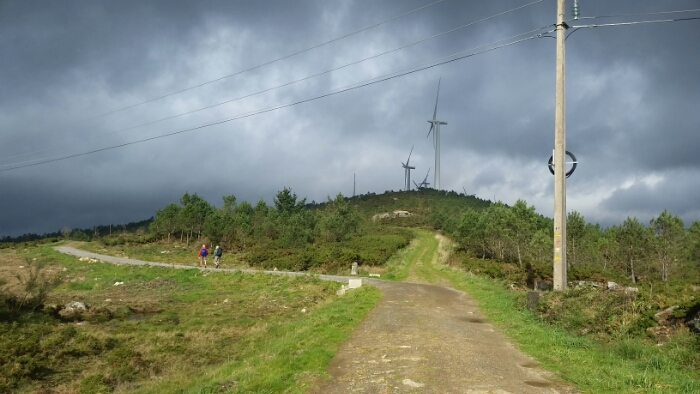 And with lizards in mind, I saw quite an interesting one right on the road today. 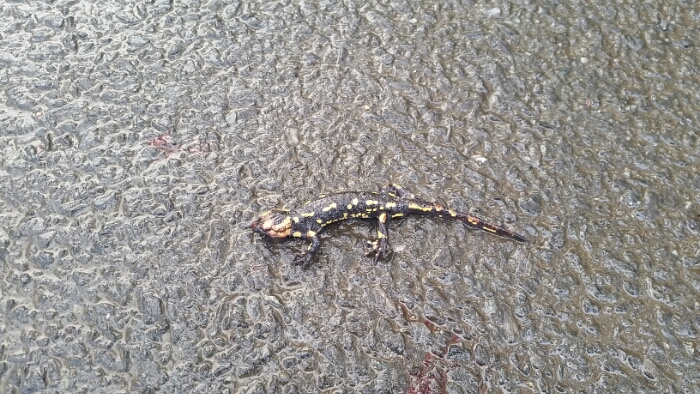 Lizard on the road

Other animals were sighted along the way. Lucky failed to lure the one cat he encountered, even with his cat treats, but he had better luck with dogs he encountered and with a friendly cow. 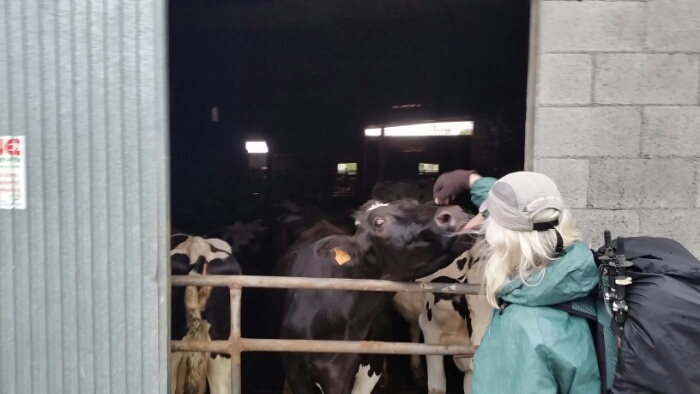 We also spotted some sheep today, one set grazing adjacent to a house in Olveiroa. One presumes that the residents have no need of a lawnmower! 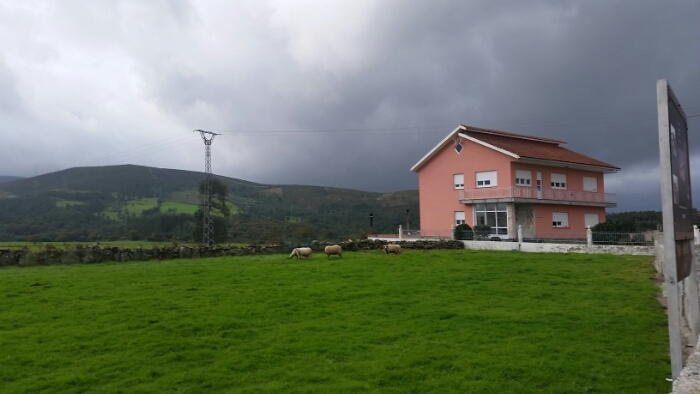 Sheep on the lawn

Another thing we saw a lot of today were advertisements for taxi service, plastered on many, many poles and trees along the way. It actually made navigation a little easier, as if we had any doubt at an intersection of turning left or right, we would just look to see in which direction the taxi ads continued. 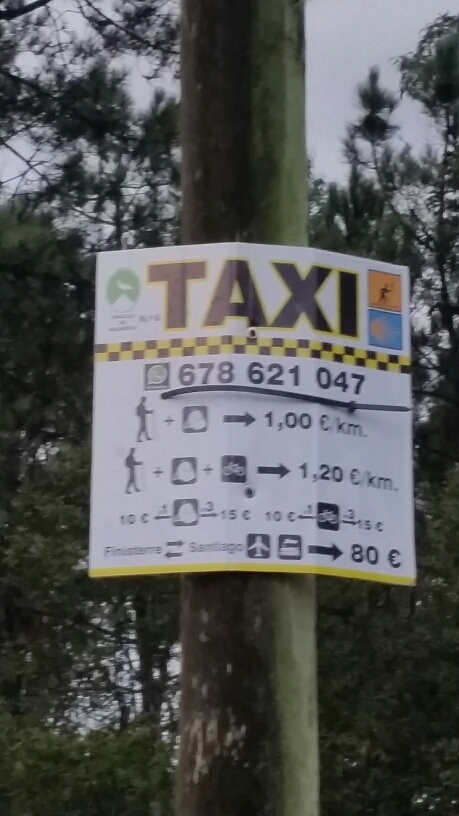 We stopped at an Albergue that French Patrick had recommend, “A Pedra” in O Logroso. This is about a kilometer short of where one must choose between going to Muxia or to Finisterre. We stopped to have lunch and decide whether to stop for the day or to push on. It was only 11:30, but we had already hiked about 17-1/4 miles, and the next Albergue was about 10 miles further.       As we ate our lunch, the rain began to fall, and soon it was just hammering down hard.   Suddenly our decision was an easy one. 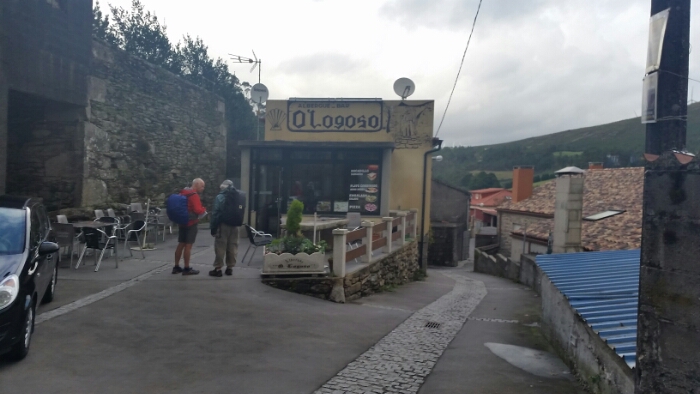 Done for the day

Given the current and anticipated rain, we will almost certainly abandon our plan to go to Muxia, and instead just finish our hiking tomorrow with about a 20 mile hike to the “western-most point” of Finisterre tomorrow. Muxia had only been added to the agenda when we found ourselves ahead of schedule, and we’re all agreed that we would rather have yet one more free day in Santiago, rather than an extra day of slogging through the rain.