I married my wife (“Space Monkey”) on perhaps the rainiest day I’ve ever seen in New York City. One witness to our courthouse wedding reassured me that rain on one’s wedding day was good luck, and after ten years of being hitched to Space Monkey, I am now inclined to agree. Long term relationships seem so often to revolve around shared and conflicting interests, and sparing the gentle reader a litany of all the matters which have stimulated laughter and tears in our marriage, I will say that one difference between my beloved spouse and myself is my propensity (and her aversion) to enjoy sleeping outdoors. Although I would not exactly define myself as an outdoorsman, it is safe to say that Space Monkey is one of the world’s great indoorsmen.

Space Monkey’s aversion to sleeping in a tent has not stopped me from convincing her, from time to time, into doing just that. A fit daily walker, Space Monkey and I have made many wonderful day hikes, including a memorable day on Mount Tammany in New Jersey a month before our wedding day. Perhaps a foreshadowing of the monsoon fated to soak our nuptials, that September night we camped along the Delaware River and were totally deluged. Space Monkey had never slept in a tent before that night– it was a cheap tent and it leaked. The experience was not at all pleasant for Space Monkey. It was quite some time before we camped again. We did better years later, camping in Missouri. Space Monkey woke up to pee in the night and found two raccoons milling around our camp. A lover of animals, Space Monkey is usually duped into sleeping in a tent by my suggesting that such Bedouin accommodations are a necessary inconvenience to facilitate the observation of wildlife.

This year, to commemorate our tenth wedding anniversary, Space Monkey and I decided to press the boundaries of the pedestrian underworld of metro Atlanta and go car camping without a car. Sweetwater Creek State Park, west of Atlanta, seemed to be the only place to legally tent camp that was also accessible (by some definitions) via public transportation. A bus, a train and another bus connects our neighborhood to the fringes of the Cobb County exurbs. A long road walk, navigated imperfectly by Google Maps, connects the aforementioned exurban fringe to state park land. Sweetwater Creek has added a brand new overnight pay-camping facility with five tent sites and a number of luxurious yurts. Space Monkey and I just wanted to get away from the city and out into something like the woods.

We weren’t out in the back country, but the level of unnatural ambient noise at the state park (traffic) was greatly reduced. The birds sang, the breeze whispered in the leaves, and I farted with far less diplomacy which resulted in rustic and peculiar woodland melodies! We explored the creek and the ruins of an old textile mill destroyed during the Civil War, and we watched people. I think  Space Monkey and I like to people watch because we share an essentially alienated outlook toward human society. For two days we hiked around and watched nature and people connecting to nature: day hikers, trail joggers, young lovers and old lovers and pubescent companions discovering first base (maybe second). This is the perfect environment to contemplate a decade passing. If a marriage works well enough, it ends with a death. The realization of this is the occasion to take a long walk in autumn with the one you love. 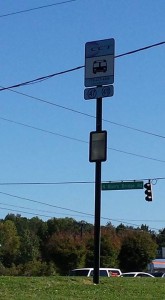 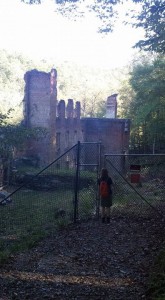