Out on the trail, with cameras

I was out on the trail Thursday and Friday afternoons. Thursday was chilly and sunny. Friday was chilly and damp. Both were fine days for walking. I walked down to Durand Eastman Park Thursday and drove to Letchworth yesterday. I did about six miles each day. And I walked past sunset both days. I had forgotten how much I enjoy being out in the wood (or on the creek in my canoe!) after dark, as long as I know the route ahead of me. I carry a headlamp but prefer to avoid using it if possible. A headlamp opens up the details in front of me and closes the rest of the world around me like a tunnel.

I carried three cameras. The cell phone lives in the breast pocket of my coat. The Argus C3 and Ondu 135 pinhole ride in pouches on the hip belt. The pinhole camera weighs not quite nine ounces. The Argus, on the other hand, weighs twenty-nine. The stubby tripod adds another eleven. Add in another pound for my little light meter and a stock of film and you’re up to five pounds or more. That’s a significant chunk of weight for a long-distance hike. But that’s the way it is. Every hiker has to decide for him or herself which items are necessary and which are not. These two camera have become beloved companions on the trail.

I could shave a few ounces by getting a carbon-fiber tripod but, as with all hiking gear, the cost difference between light and ultralight gets fierce. When to spend the extra money and when to go with what you have is another decision you have to make.

Since I am in training for the trail, I carry all three cameras whether I plan to use them or not. I am gradually adding miles to the feet and pounds to the pack.

I have been a computer geek for most of my seventy years. I made my living sitting in front of computer screens writing code, running websites, and figuring out why computer systems weren’t behaving properly. Shooting with classic film, no-electronics, cameras is my rebellion, sanity, and fun. I like the way manual cameras help slow me down. As I said earlier, I like the mystery of not knowing immediately how the photograph turned out. Since it costs me money every time I release the shutter, I don’t just snap away rapid-fire. I need to think about what I am doing.

When I set aside my medium-format cameras and shoot 35mm rectangles, it’s usually an Argus C3 Brick that I reach for. I got a couple from my dad when my parents broke up housekeeping a dozen years ago. He gave me a bag of his old cameras (“and a couple of Bricks”). I had another given to me, and bought another one or two online. Swapping lenses is not trivial, so I leave one with the stock 50mm lens and another two with the Sandmar 35mm and 100mm lenses. The fourth in the working collection is one where I replaced the jammed lens with a pinhole cut from a Genesee Cream Ale can. Just because it wanted to be done.

Says Wikipedia, The Argus C3 was a low-priced rangefinder camera mass-produced from 1939 to 1966 by Argus in Ann Arbor, Michigan, United States. The camera sold about 2 million units, making it one of the most popular cameras in history. Due to its shape, size, and weight, it is commonly referred to as “The Brick”.

All artist and artisans find that certain tools simply fit their hands. What works for one may not work for another. For me, the Argus C3 is one of those tools. The Ondu 135 is another. I’ll talk about it another time.

As I do not wish to carry a hundred pound pack, the film developing and scanning equipment stay home. My plan for the trail is to arrange with a local lab to develop and scan the film and post the scans online in some appropriate place. The simple editing tools on my phone will be adequate for the trail. The rest can wait.

The Finger Lakes Trail fingerlakestrail.org/ runs east-west through the southern Finger Lakes region in New York. The Letchworth branch of about 23 miles runs north-south along the east side of the Genesee River gorge in Letchworth State Park. The north end of the branch enters the park from the highway just west of the river, quickly crossing to the east side via a foot bridge. I did an up-and-back hike a couple weeks ago from the little power-generating dam by the highway to the big Mount Morris flood-control dam in the park. I used the Argus C3 for the photographs.

The first part of the Letchworth branch follows a switch-backed summer-only road up to the scenic Livingston County campus with the Mount Morris water tower that can be seen from miles away. The trail passes through a wooded municipal park then into the forest along the east rim of the Genesee gorge to the Mount Morris dam and beyond.

I have taken many photographs of the Mount Morris dam over the years.
Why do I keep taking pictures of places I have photographed before?
Because they are never quite the same. 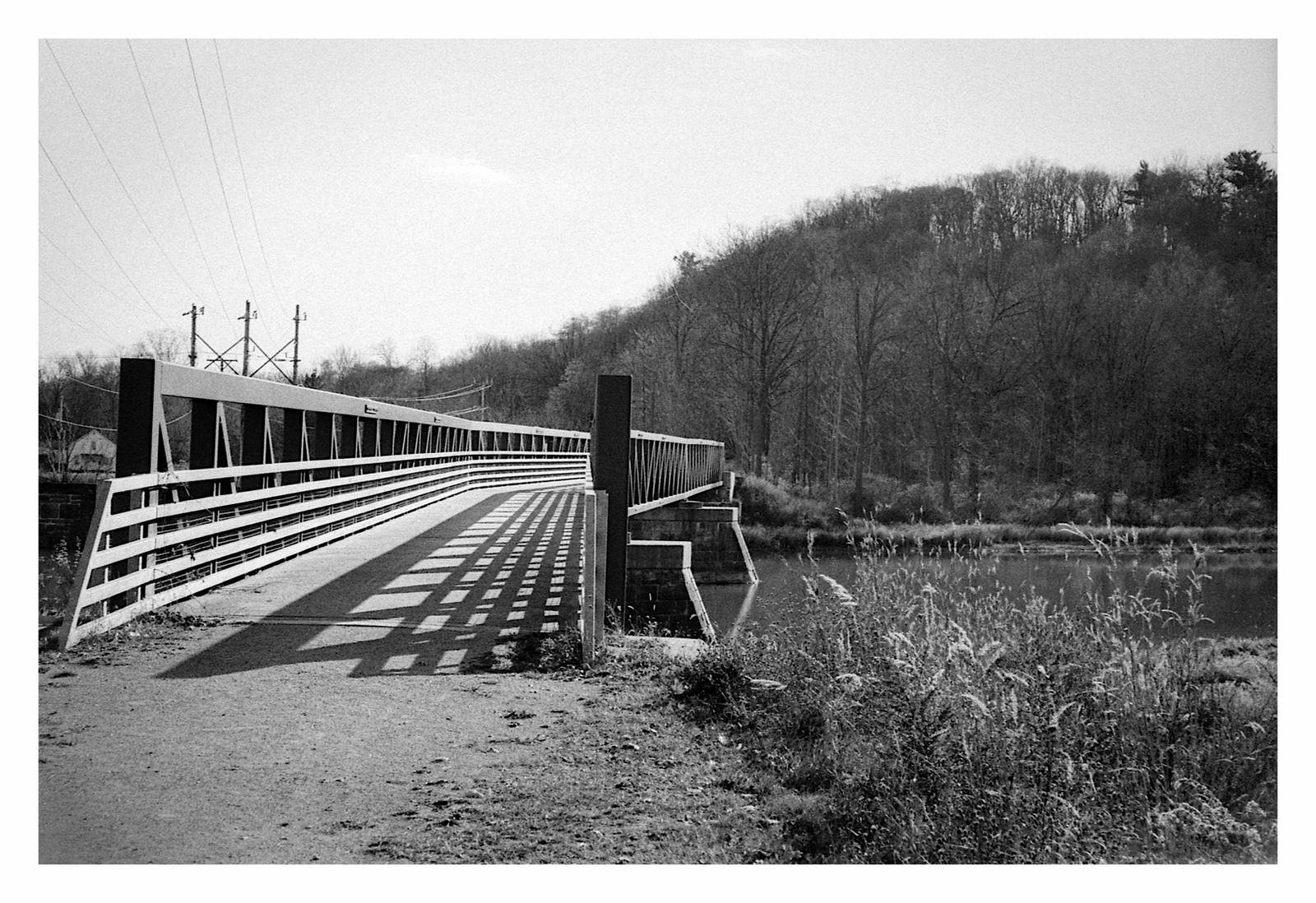 Footbridge across the Genesee River by the highway 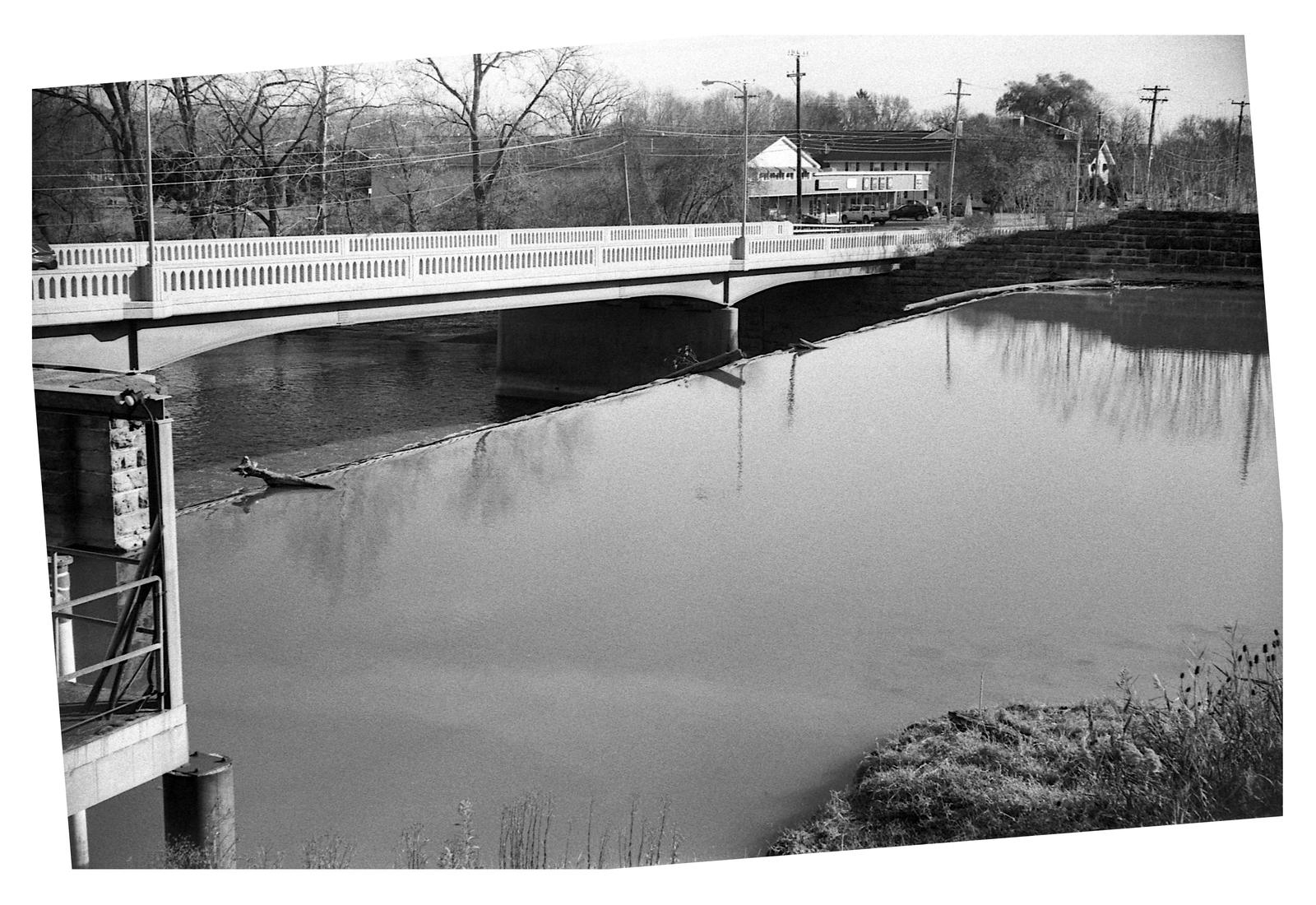 The little dam at Mount Morris 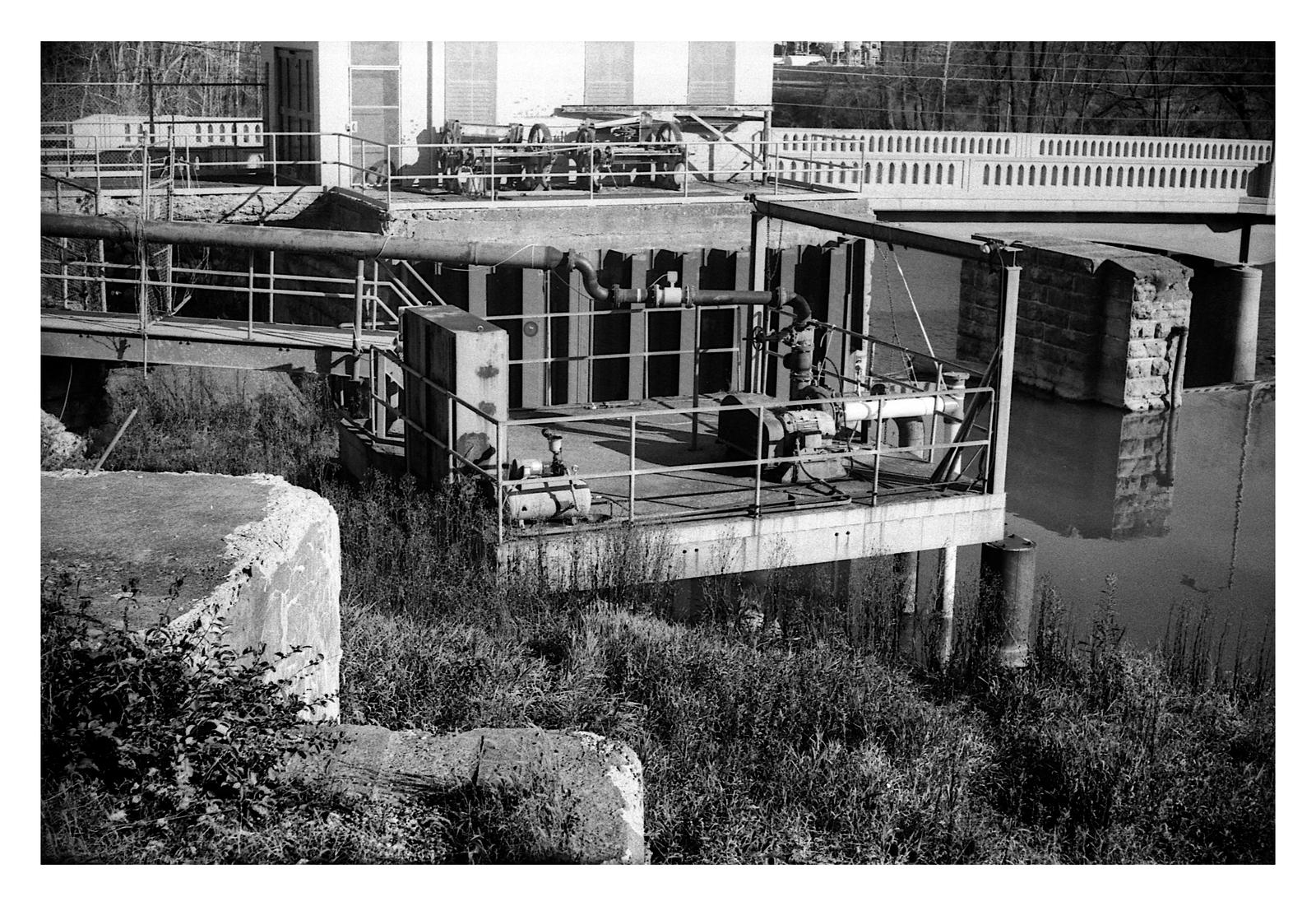 Power station on the little dam 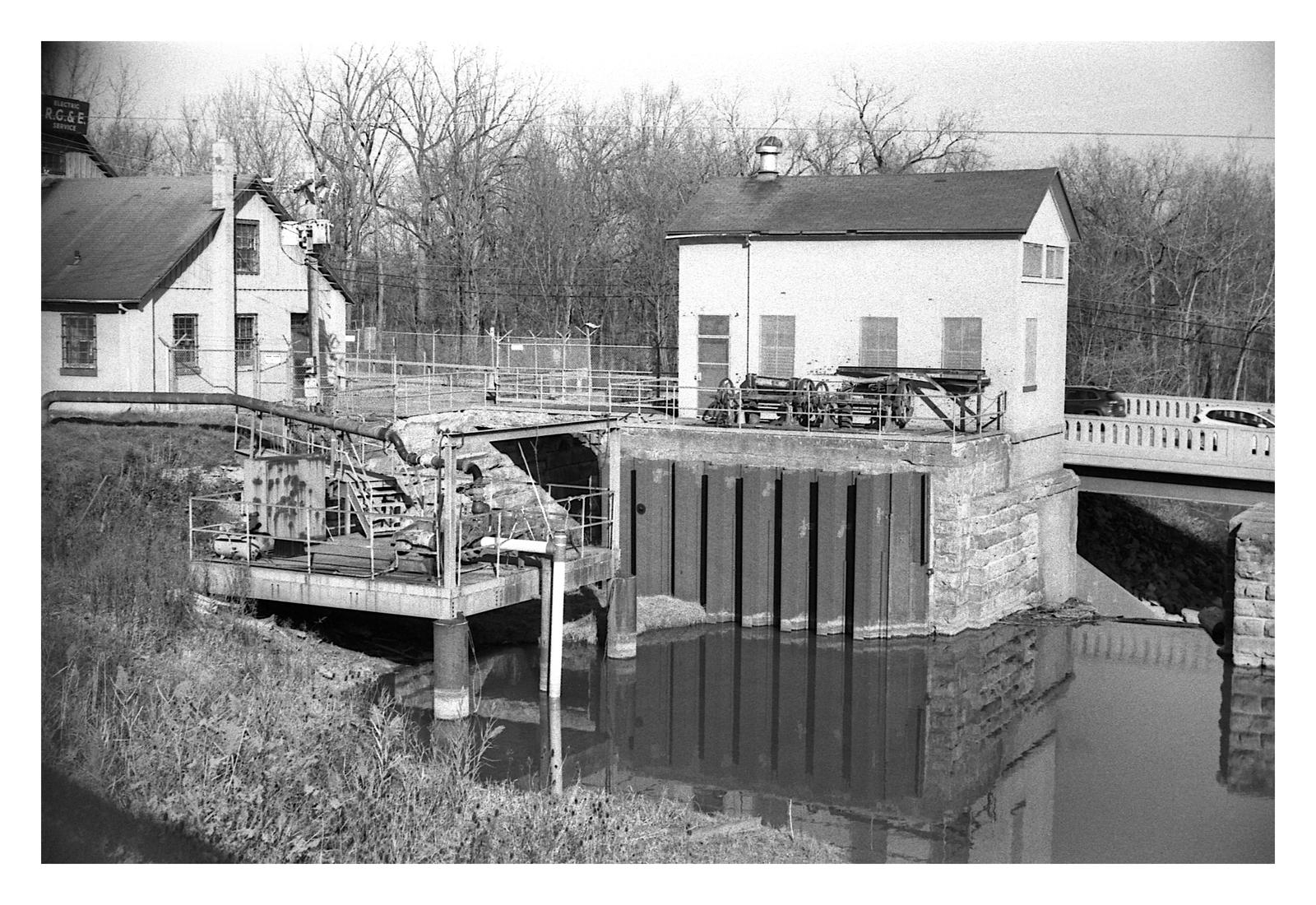 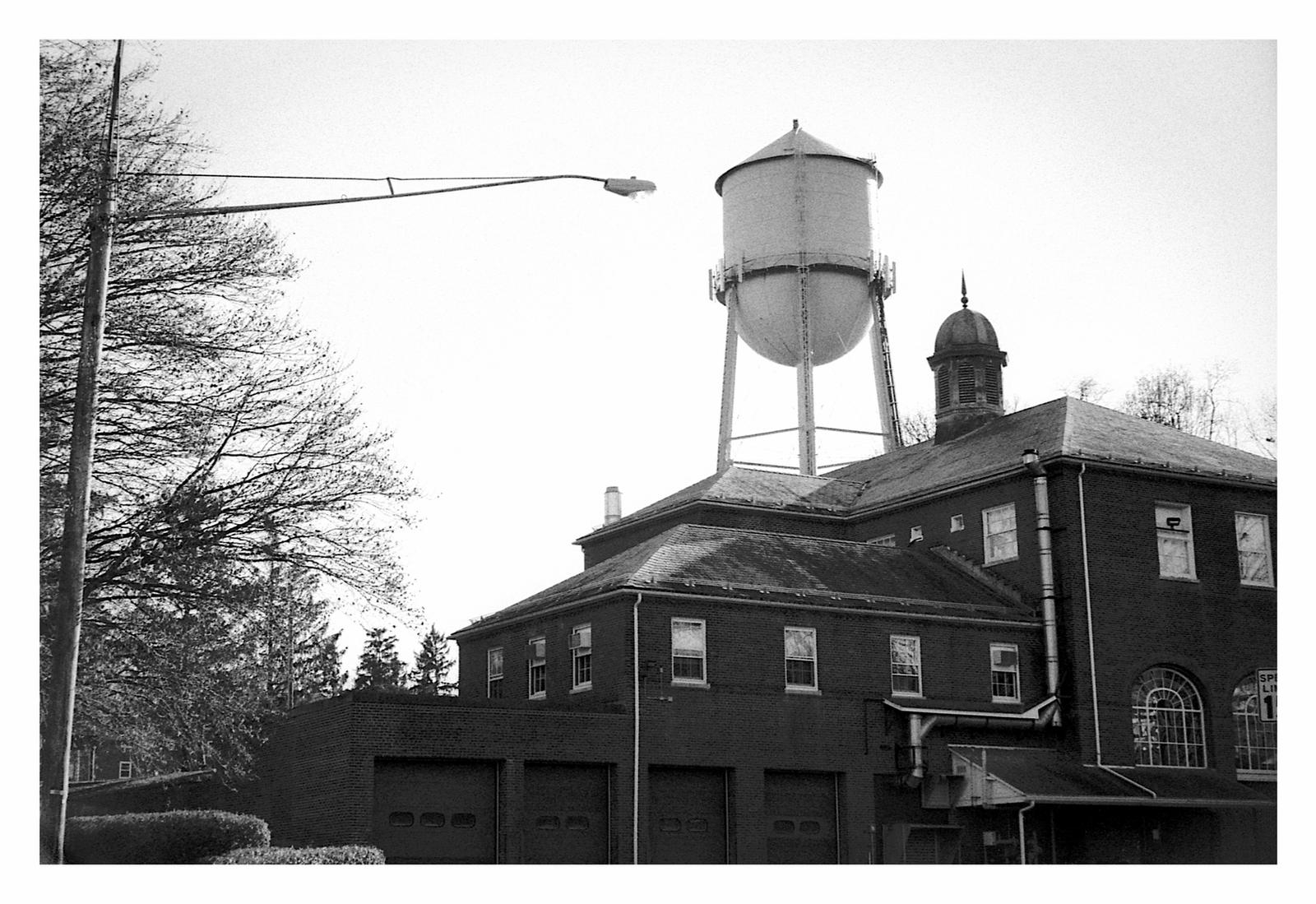 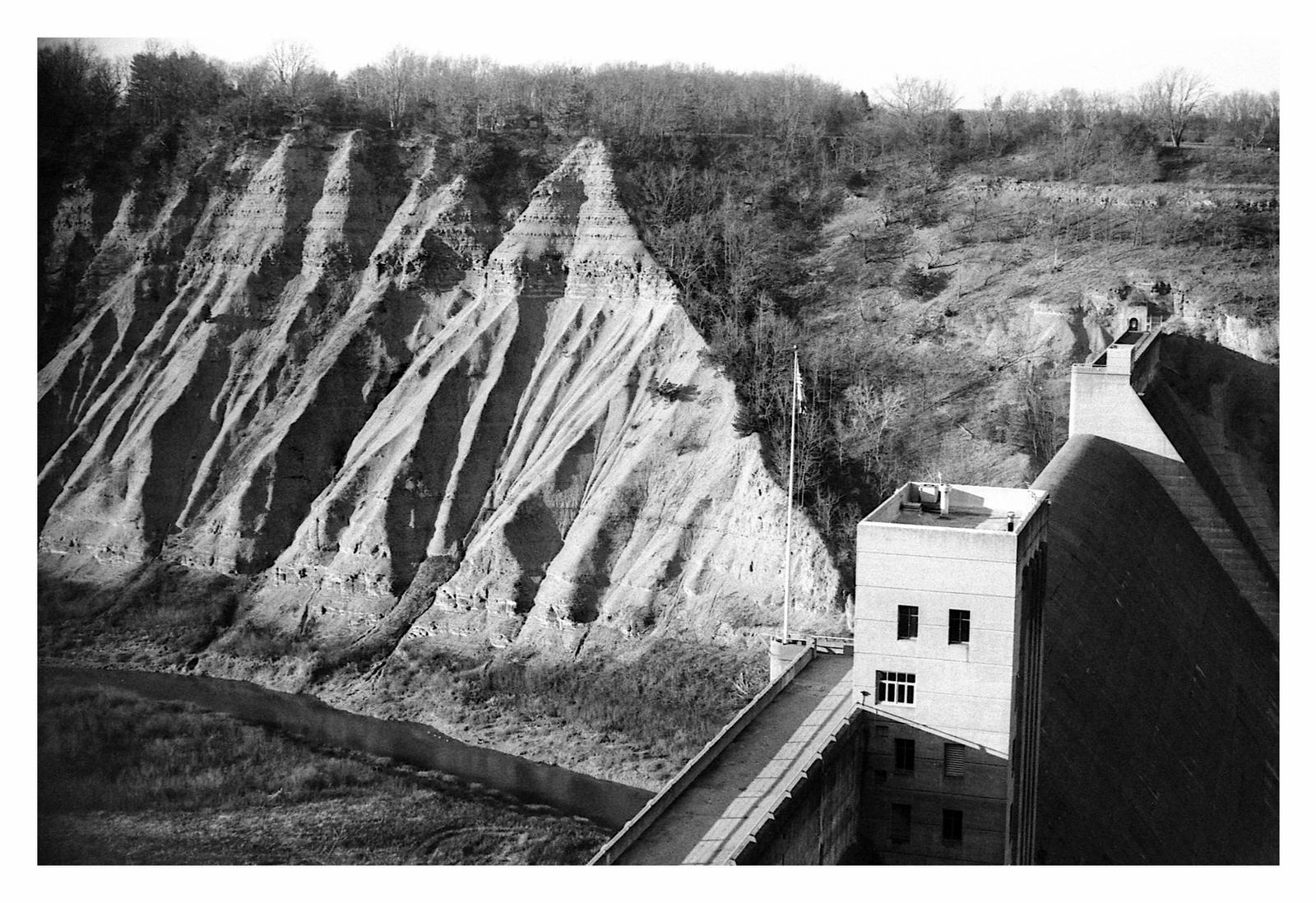 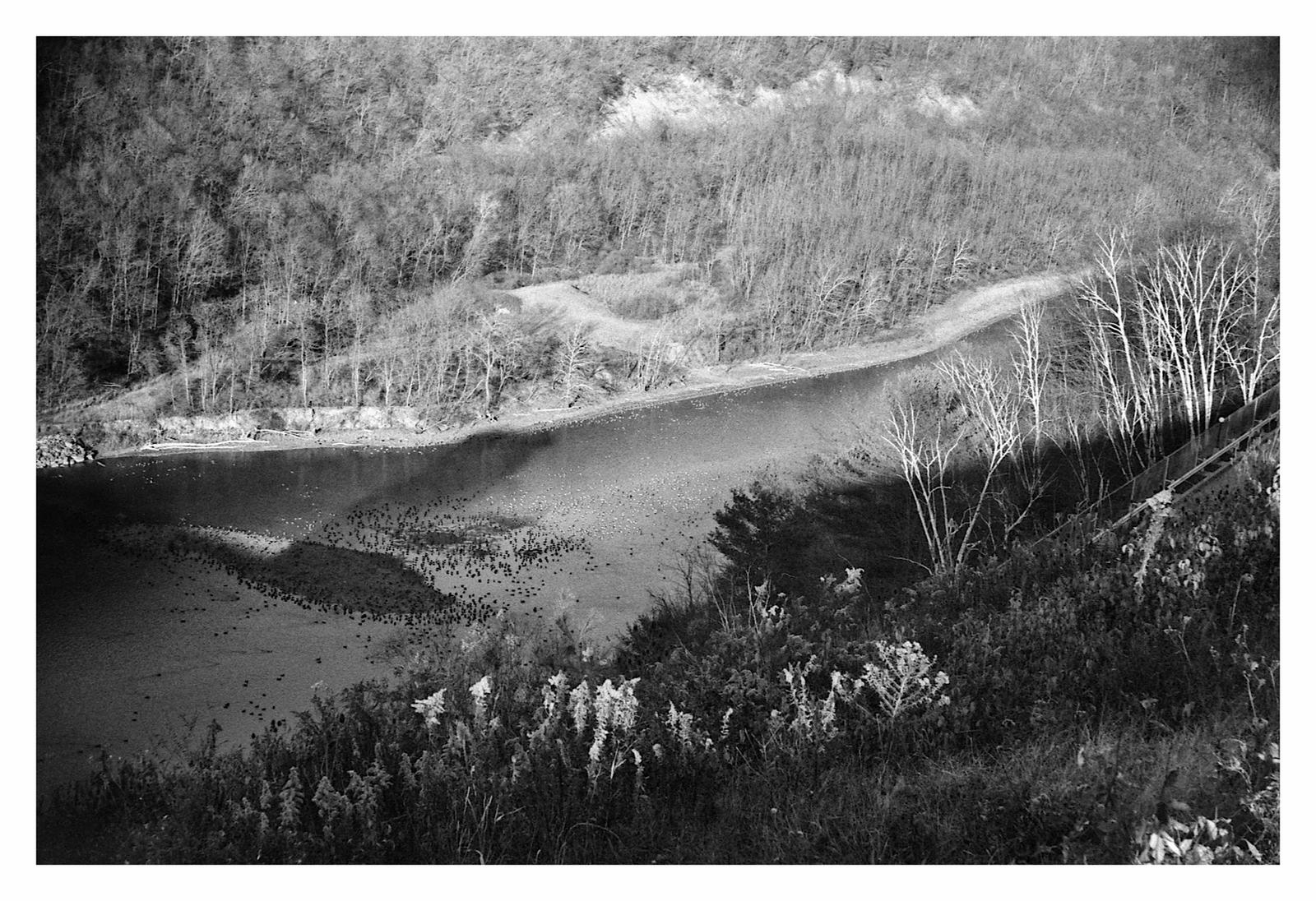 Geese in the shadow of the dam 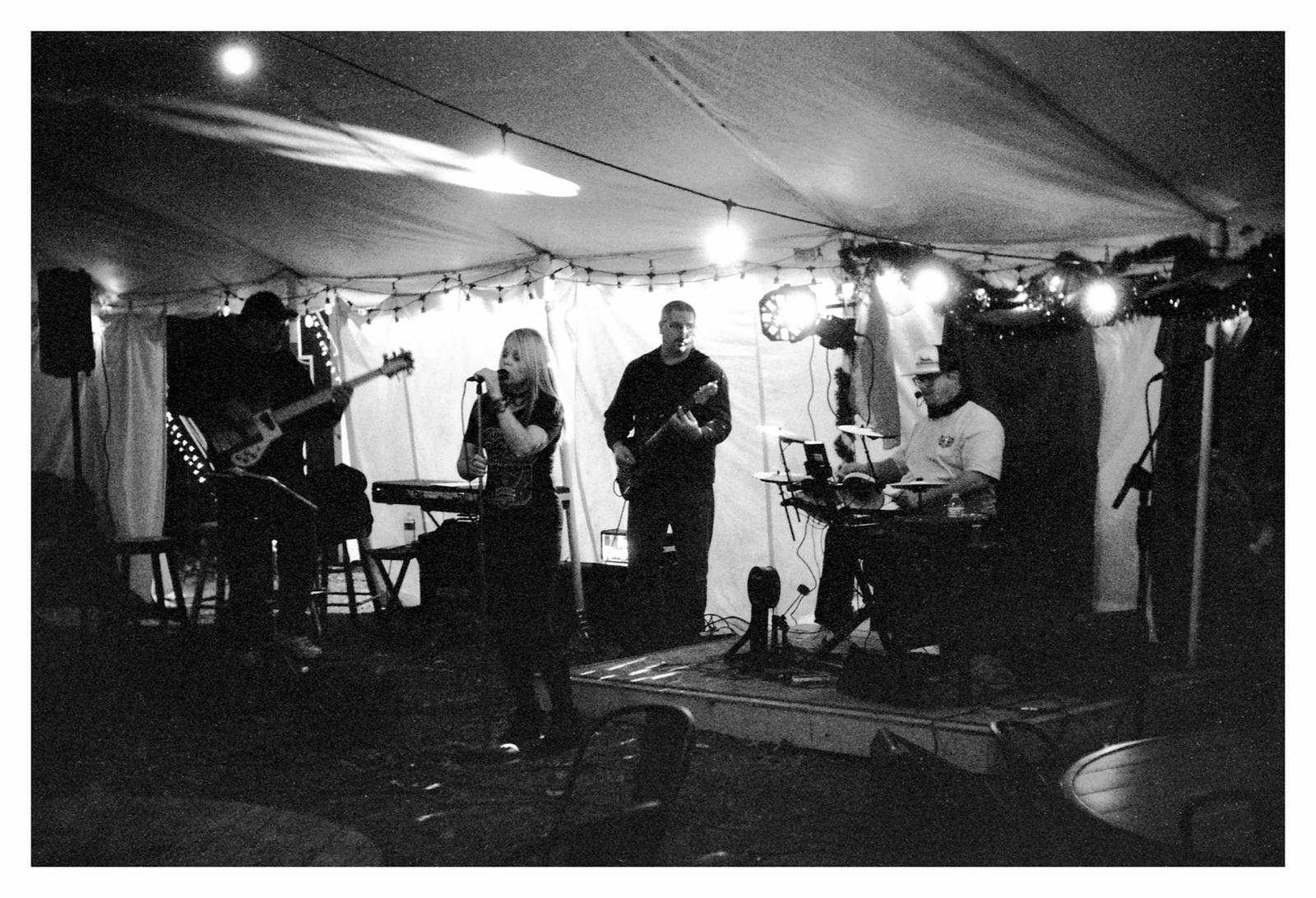 Time for a post-hike brew and music!