My first three days on the AT !

The first three days of my AT adventure were packed with a lot of memorable events. Here’s how my thru-hike started.

I couldn’t believe my start date was here, as I stirred before sunrise in my Harper’s Ferry inn bed. On the train ride in yesterday I was warned by another hiker that I’d hear trains all night long. Honestly, it didn’t matter much to me. Could I really sleep soundly? I was on the doorstep of a lifelong dream event!

My first stop of the morning was to the Appalachian Trail Conservancy headquarters to register and get my AT Trail badge. On the way up a steep street a black cat popped out of a yard and literally crossed my path! Ugh, OK … 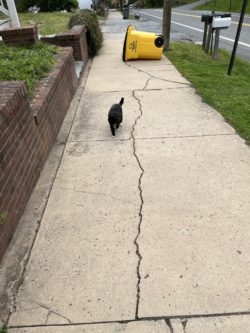 No bad luck at registration as I got my picture taken for the record. I was off! 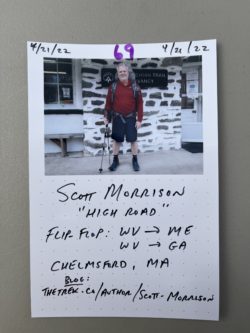 If you’re not up on your West Virginia geography, Harper’s Ferry is on the far northeast point of the State. Maryland is literally across the river. So after a quick bridge crossing I was hiking in Maryland.

The starting Maryland miles are a completely flat canal path. Not really hiking but some nice river vistas and flowers. The music repeating in my head was Imagine Dragons’ “Follow You”. I’ve written previously about my late father’s connection to this hike. It was nice to imagine that he and my late Mom were singing “I will follow you way down wherever you may go …”

The weather, initially forecast as harmlessly cloudy, added a chance of midday showers – these would linger most of the afternoon, but I didn’t care. My spirit was sky-high! A fleeting glimpse of two bounding white-tailed deer was my most memorable moment (MMM) of the hiking day.

I found the jagged limestone formations to be strange and fascinating. They differed greatly from the glacier-smoothed granite I’m used to seeing in New Hampshire. In a number of places the limestone had created tomb-like structures above the ground. Kind of creepy given the foggy wet forest surroundings. 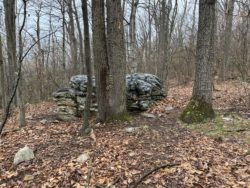 The original version of the rock song “Smokin’ in the Boys Room” entered my head as I passed through a dirt road crossing called “Brownsville Gap”. (Bonus points to you readers who get the connection. And if you did, you’re pretty old!). At Gathland State Park I met a pair of hikers staying dry under a pavilion. When I introduced myself using my trail name “High Road” the younger one broke into the Scottish ballad in recognition. He was going by the trail name ‘Squito (short for “mosquito”), an old camp nickname. But – spoiler alert – sometimes the trail will hand out its own name to hikers.

The last five miles to Rocky Run Shelter were an enjoyable walk through forests of varied types. It was fascinating to see some sections budding out while others had not started.

At the shelter with about ten others, I set up my hammock and prepped some Ramen for dinner. I was pleased with finishing a 16 mile first day hike in seven hours. As usual, I had difficulty sleeping on my first night in the woods. An early 8:30 bedtime and unfamiliar forest noises kept me restless.

Day 2 started with a bang. Not a figurative “bang”, but a 12:30am boom that sounded like a full bookshelf tipping over. This was followed by various frantic voices of concern. Eventually the noise settled and I drifted into a few hours of sleep.

In the morning light as hikers pulled out their cook stoves I got the full story. Apparently my new friend ‘Squito had a bathroom urge and forgot he was sleeping on the shelter’s eight foot high second level. His body had slammed into the shelter floor. When he later rose to meet the breakfast group he announced that he’d agreed to the new trail name “Fallout”. Certainly that boy was “going down, down in an earlier round” (ha ha)— so the name fit. I hope Fallout is OK – I’ve yet to see him on the trail since.

The day would turn out to be gloriously sunny but not hot. Trail birds awoke me with beautiful singing and showed themselves on the trail throughout. I heard then spotted a towhee rustling through low shrubbery as they tend to do. Numerous black raptors circled over head: hawks, ravens, and others. I was truly delighted by a close up of two huge pileated woodpeckers! These very large tree drillers are a rare sight in my home state. I’d never gotten such a close look at them before.

Two music selections dominated my head during the day:

After an interesting stop at “the other” Washington Monument (who knew?), the trail climbed up to two fantastic cliff viewpoints. Annapolis Rocks was followed by Black Cliffs, and both offered stunning views. Those cliff views were day 2’s MMM (most memorable moment). 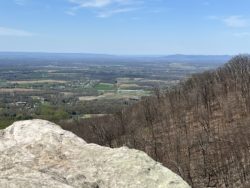 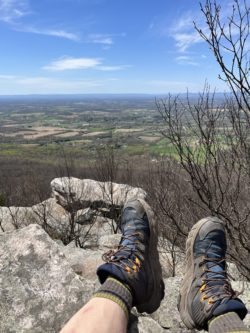 As the day wore on I really wanted to press for the next shelter – a 20 mile day – but ultimately listened to my (aching) body and stopped after 15. This is the type of decision that thru-hikers continuously make on the trail.

Early on day 3 I recognized I made the right decision to not push the extra miles on the prior day. There were some nasty rocky stretches that slowed my pace considerably.

About four miles out of camp I encountered five familiar hikers that had started the trail when I did. We shared the same pace too, as we’d stayed at the same shelters so far. I knew they were all from Georgia, but only Lampshade (who had a big sun hat like a … well, you know) was planning a long hike. The others were along for only a week or two. As I approached, Lampshade greeted me warmly and asked to be reminded about my trail name. In response I said “High Road. And I know your name is Lampshade, but I don’t know the rest of you – I just think of you guys as the Georgia Satellites!” We all shared a laugh, and spent a few moments discussing that 80’s era band and their hit song “Keep your Hands to Yourself”

Later, Mark, a hiker from Massachusetts who I’d met on the train ride into Harper’s Ferry caught up and headed in with me to lunch/ resupply in Cascade MD.  We walked a mile plus in for beer and pizza but would call a hiker shuttle back as the heat escalated.  The late arriving driver apologized, saying he was really busy – he just got a call to pick up Lampshade and the Georgia Satellites!  That made me laugh out loud – and was the day’s MMM!  I’d given out a trail name!

The five miles post-resupply just over the PA border were a bit grueling, and I was developing right ankle pain.  I didn’t plan on needing to take the Aleve I brought so soon, but I needed the “Vitamin A” for my foot. Despite the pain I was proud of my 46 miles in days 1-3.  I’d also reached my third state in three days! 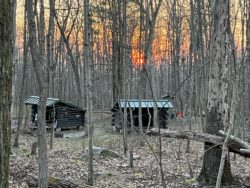 He was packing a bugle to raise money for the Wounded Warrior Project along the way.  It was a moving and unique moment for me, and a great end to the day.  Given the clear skies I slept without a hammock tarp to watch the stars.